All of us, at certain points in our lives, have come across scammers who would try to scam us! But have you ever scammed a scammer?

Whether it’s fake emails, fake text messages or fake phone calls, people would try their best to scam us and trick us into sending them some money. Unfortunately, some people are dumb enough to actually fall for it while some would just understand the scam and simply ignore them. But then there are people who are just too smart for the scammers even and would make sure to listen to what the scammer had to say and stall them in the best possible way! Well, those are our favourite kind of people! Because you see, ignoring the scams are too mainstream but scamming a scammer is not something everyone can do!

Today, we are going to be sharing a story with you of a scammer to tried to scam this individual but oh boy, this individual had it all figured out already. He didn’t just waste the scammers time but made sure to annoy the fu*k outta him/her! It’s truly amusing to watch how he improvised so nicely and cleverly with the scammer. Now, without wasting any further time, let’s just jump onto the screenshots of those text messages that we have saved to share with you! Also, you should definitely take notes from this guy so that if you’d ever need to stall a scammer, that’s how you should do it!

1. So, it started off with the scammer trying to get this individuals attention! 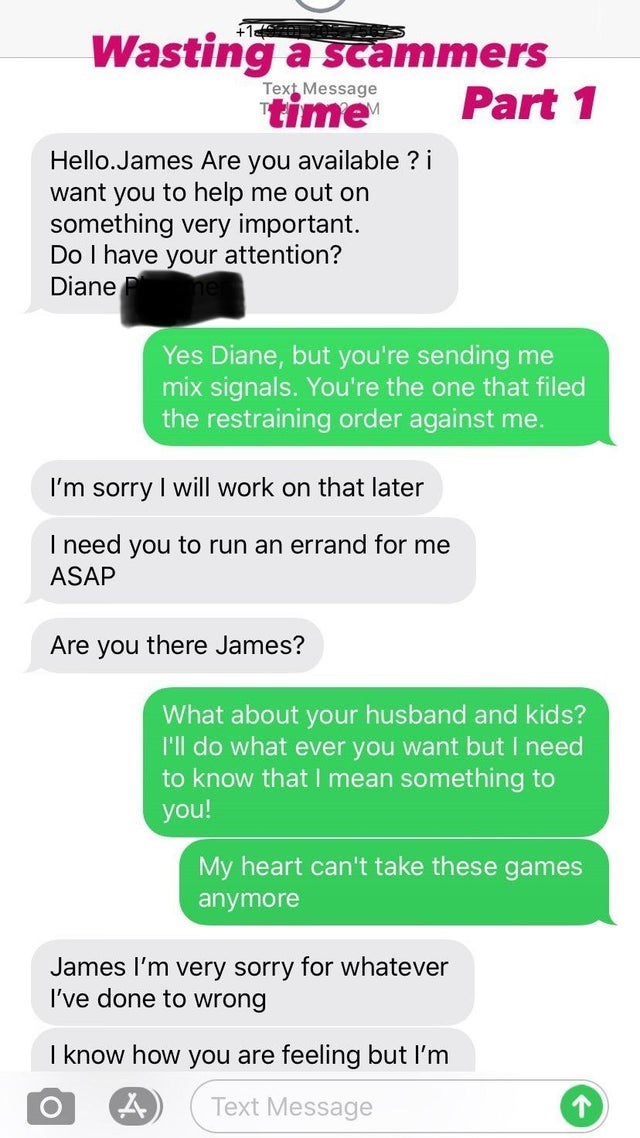 Damn, what is James even up to!

2. LMAO! This is GOLD to actually see the scammer fall for it too! 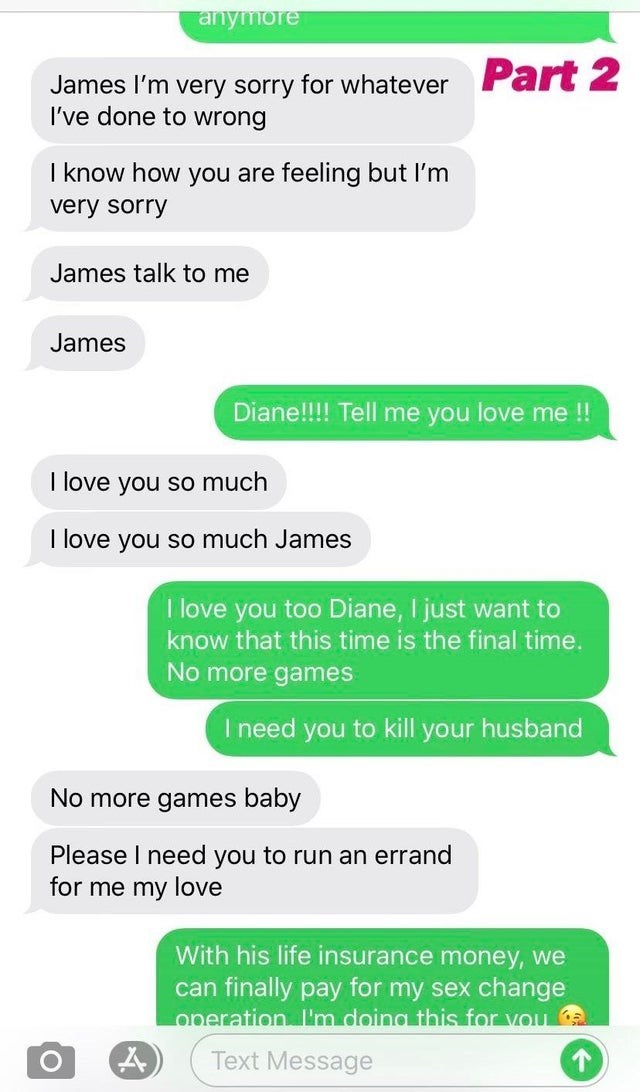 “KILL YOUR HUSBAND”!? Damn! How did he even come up with it?

3. The scammer tries his best to scam James! 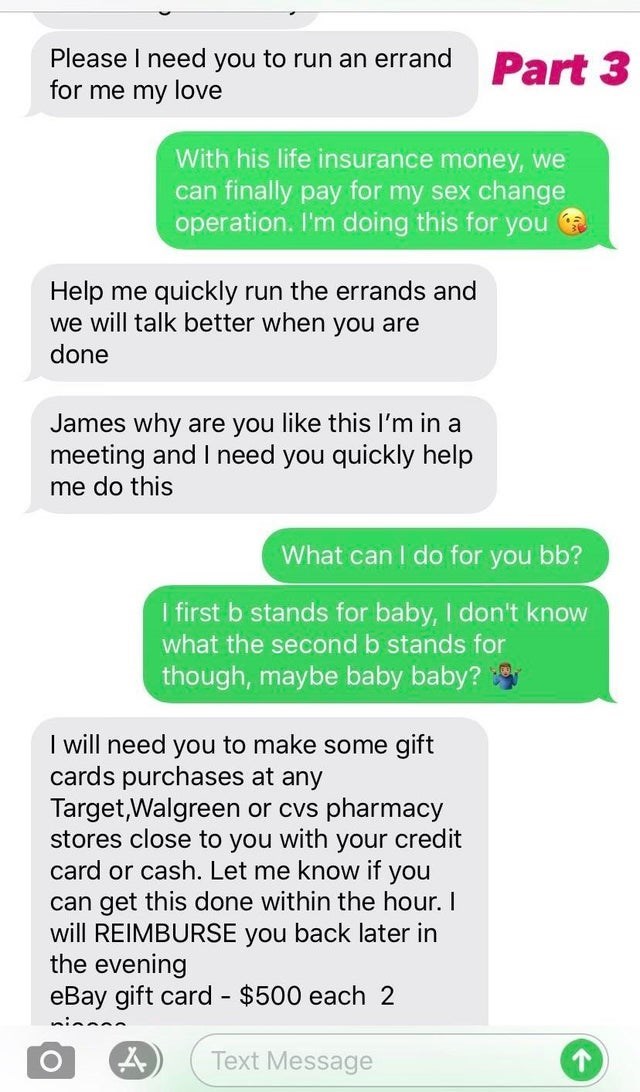 But James surely knows how to stall! he appears to be a pro at it!

4. So, the scammer wants eBay gift cards worth 1000 dollars! 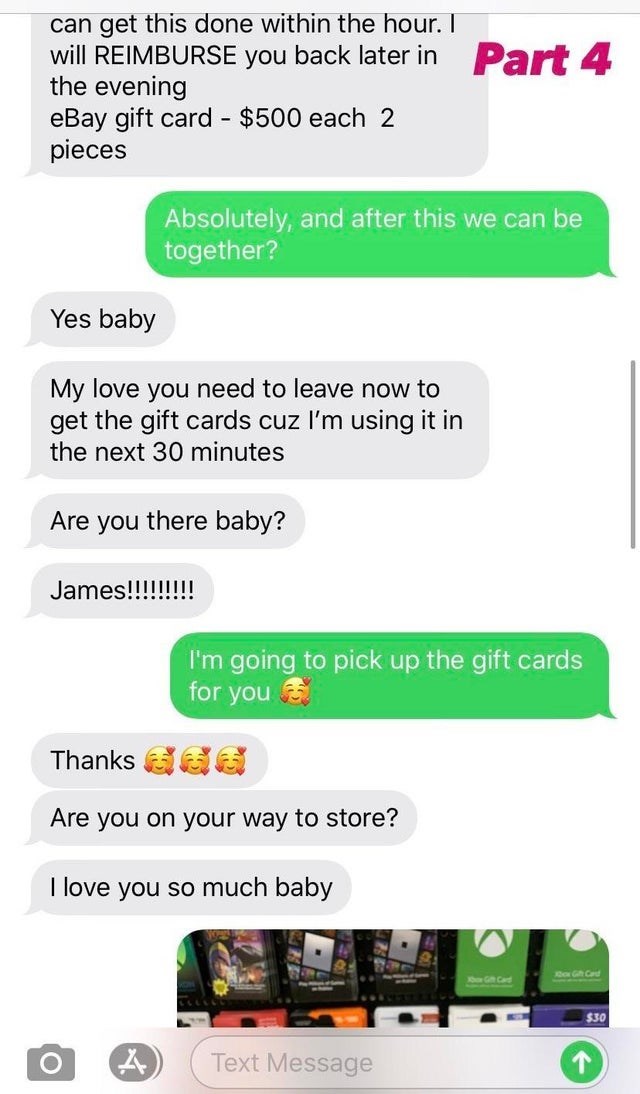 But who are you even kidding? How come the scammer didn’t see it coming!

It just keeps on getting interesting, doesn’t it? I mean, we have seen a lot of people who would rather just ignore it than actually stalling the scammer but the best thing about this story is how the scammer is getting the taste of his own medicine! How he kept on being tricked as well. Oh well, it doesn’t end here obviously and let us assure you, the ending is hilarious AF! Keep scrolling until the end to see!

5. HAHA! It’s pretty amusing to watch how the scammer is being so desperate. 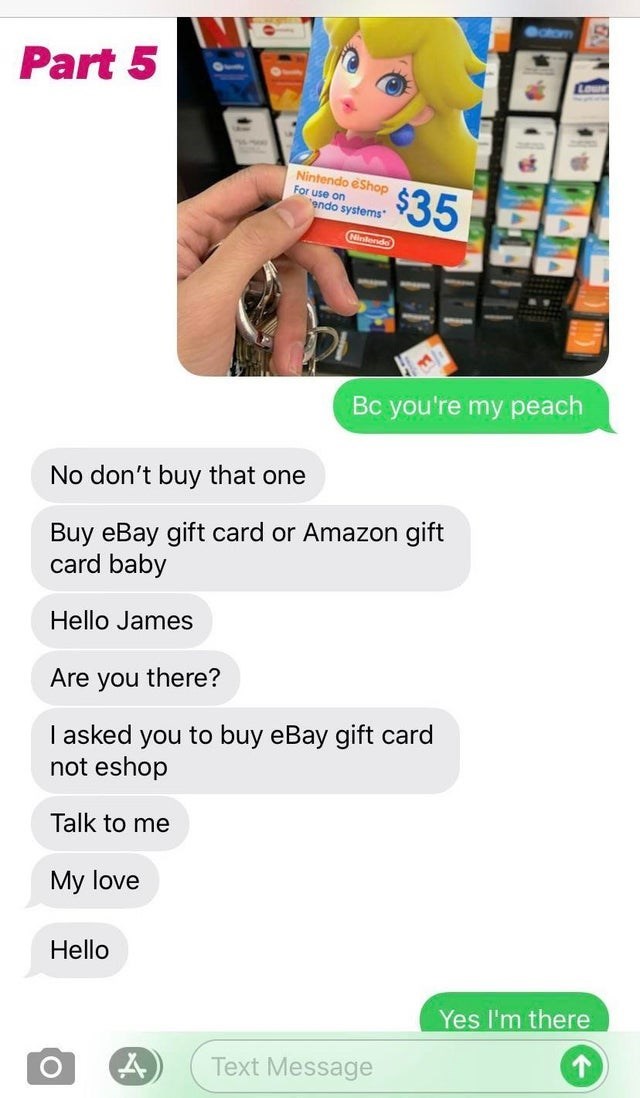 He’s still thinking that this guy is going to fall for it! 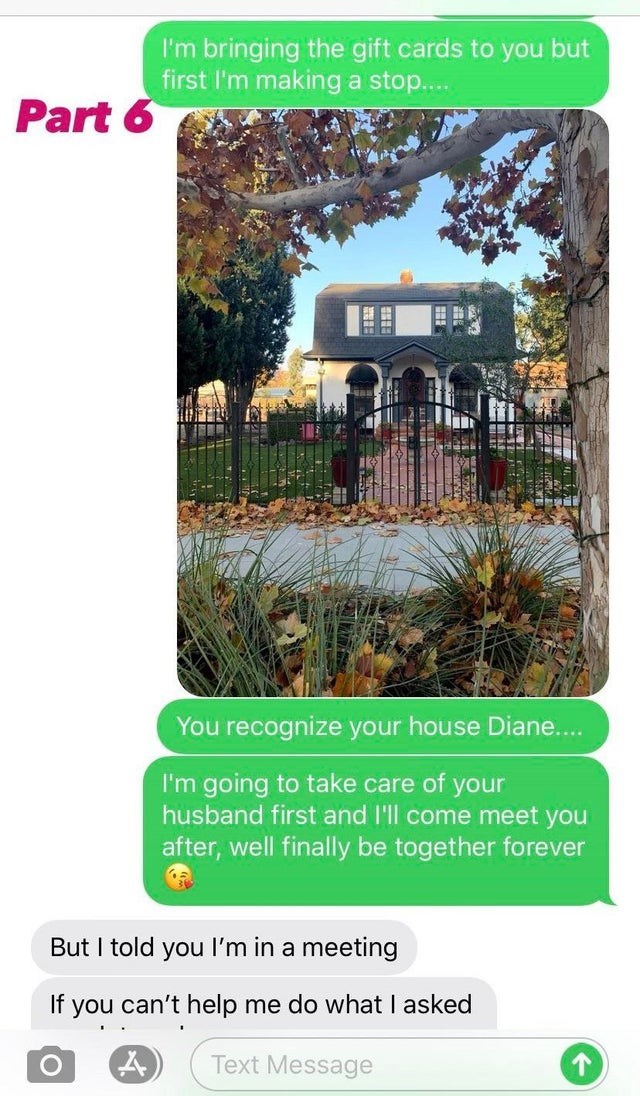 But maybe he’s just trying to teach the scammer a lesson that he can’t make everyone fall for it.

7. So, the scammer is still here waiting for his “cards”. Interesting. 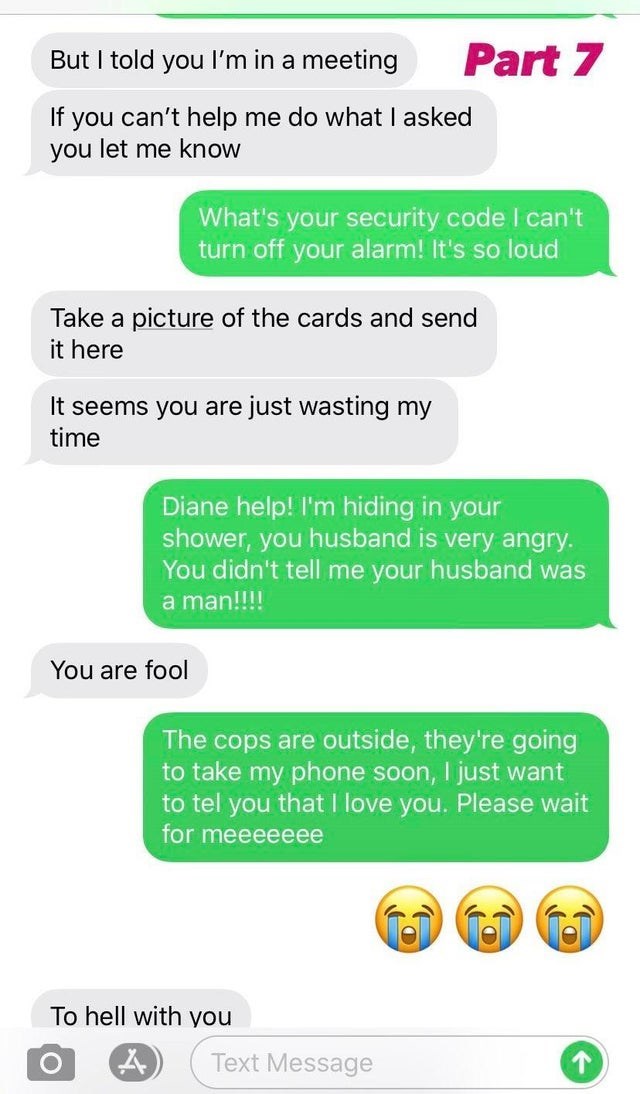 Haha don’t you just love how James is prolonging it!

8. That ERROR message though! 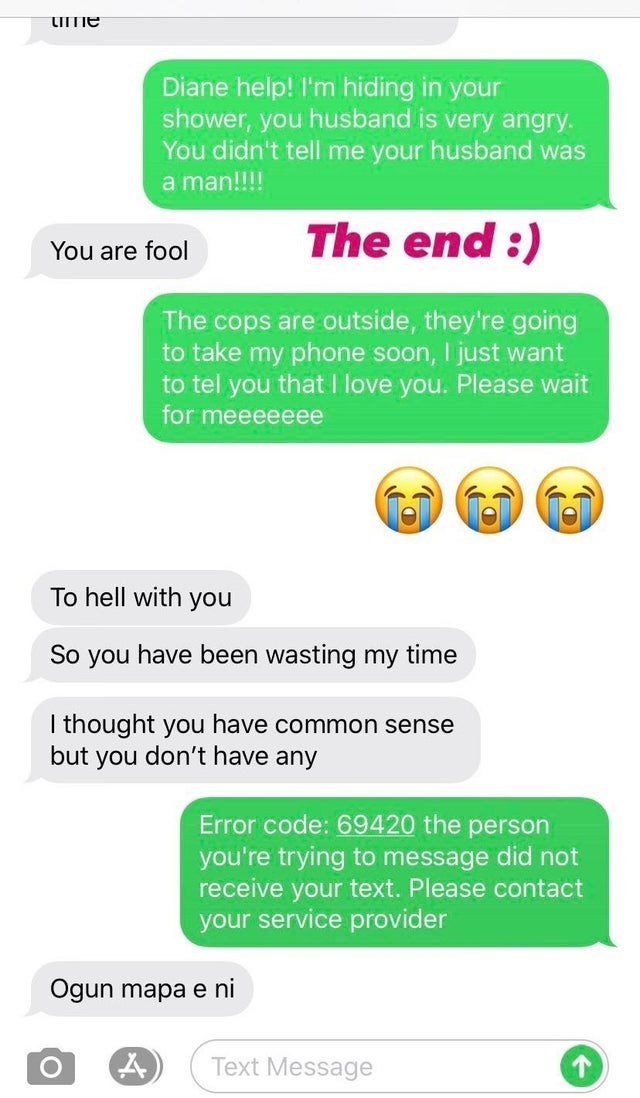 What language did the scammer even used at the end!? Anyone?

Well, the story ends here and we hope that you’ve had fun! But we also hope that you learned something from it. The first rule is to never ever send someone any money, cards or any form of payment to anyone that you are not sure about. Also, don’t ever fall for anything and never trust when it comes to money as well. Anyways, what were your thoughts about this whole fiasco? Let us know into the comments section below! 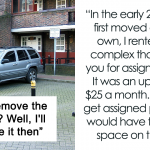 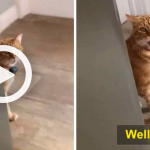