Animals aren’t the smartest when it comes to some things.

Now, I am not going on a whole rant about how all animals are dumb because that would be a complete and utter lie. Because as we all know some animals are actually quite intelligent. However, even the most intelligent species can have dumb moments. Take humans for example. We all have those moments where we do something stupid and can’t for the life of us figure out why we did that in the first place.

Our pets are just a reflection of us in that sense. And that is why many people decided to share the dumbest things that they have caught their pets doing. From being scared of a mere leaf to trying to eat glass and getting angry when they can’t, there is nothing off limits here. So if you are ready to have a few laughs, scroll on below and take a look for yourself.

I have a pit bull. One day I hear him growling and barking while outside. This is not normal for him. He usually will only bark 1-2 times when he is ready to come inside, so I was a bit concerned.

I go outside and he is having a standoff with something. He keeps inching closer to something I can’t see, then growls/barks and immediately runs away and repeats the process. I call out to him and he comes over and whimpers a bit then returns and continues the routine.

I get closer expecting to see maybe a toad, mouse, something.. anything. There is nothing but grass and a dead leaf. Turns out that he was having a 10-minute standoff with said dead leaf. It was just windy enough for it to rustle a bit, but not move. I proceed to pick up the leaf and he lets out this shriek as if I was in immediate danger. I look at him and crumple up the leaf and he just tilts his head like “oh..” and proceeds to lean on me for pets.

A 50lb pitbull terrified of a leaf. What a dumbass. – itsdjc

My dog wouldn’t come in from the front garden so I rang the doorbell and she ran straight in so she could look out the window to see who was at the door. – Appropriate-Spell191

At 4 am I woke up to the sound of my cats ‘I’ve hunted and caught a thing’ noise. It’s a high-pitched squeak/meow/trill/music of the happiest of cats. She was running closer and closer, squeaking all the while, muffled slightly by the fact she obviously had her prize in her mouth as she ran.

I live in a place that rarely gets mice or anything nasty, so as usual, I just assumed it was her toy and she wanted to show it off. Then she dropped a full bag of bagels on my face. – poormansnigella

At 4 pm, my dogs look out the front window to watch for me coming home from work. They still do this despite the fact I’ve been working from home for a year. – gamedogmillionaire

My cat is a special little creature. She was having the zoomies one day, sprinting around our hardwood floor. During this, she decided that her ear was itchy so she sat down to scratch it, then decided her foot (the one doing the scratching) was dirty and had to clean it. The end result was her kicking herself in the face repeatedly with her tongue flapping all over, and since none of this chain of decisions involved stopping, she was sliding across the floor on her ass for the entire event. – freemasonry

#6 She farted and then looked over her shoulder, growled, and barked at her butt.

I love it when my cats fall off something and get embarrassed then immediately start cleaning themselves with a “yeah, I meant to do that” attitude. – Pagan-za

Last night when feeding my snake she missed the rat and instead bit herself and then freaked out because something was biting her. –bethh02

I have a goldfish that gets way too excited for feeding time. More often than not it likes to literally jump out of its bowl into my hand where I’m holding the food… A true suicidal dumbass but I still love that fish. – craftbot9000

We have a big German shepherd, one summer night a couple of years back it was humid as hell and thunder were sure to happen. Doggo was asleep in the back garden ( we were having a small BBQ just me and the Mrs) doggo was dreaming and letting out the little yips and woofs, plus the legs were doing the pretend running thing.

Thunder and lightning started miles off over the bay and we were enjoying watching it, suddenly overhead there was one hell of a crack and flash, doggo in semi-sleep semi s**t scared state charges off down the garden headfirst into the side of the bouncy castle that we had up for the kids, catapulting herself off at a sideways tangent into the paddling pool wiping out totally as she cartwheeled into the water.

It was at this moment she fully woke up and sat in the pool wondering why she was wet and why her humans were absolutely wetting themselves with laughter. (She got a burger of the BBQ for her troubles in sympathy.) – igual88

My cat fell asleep on the garden fence in the sun and must have forgotten where she was. She always stretches out then rolls when she wakes up.

She rolled right off the fence into our pond. She also hates water. – Settledforthisone

My greyhound is a retired racer. He’s never seen a lot of snow… but he adores it. Until he saw his first snowman. He began to scream (as greyhounds do) as if it was the most terrifying thing in the world. – Feralcrumpetart

My dog keeps begging my mom for a piece of fruit, tries it, and spits it out because she dislikes it and still wants more. – Danslerr

We have a cat, Wednesday, but we literally call her Stupid more than anything else.

In the ~year we’ve had her [we got her at 5mo old] she’s:
– Gotten her face stuck in the mesh and rather than backing out, pushed forward until her face contorted into Joan Rivers fresh after a bad lift.
– Tried to get into multiple boxes that hadn’t even been opened yet.
– Tried to get into opened boxes in precarious places, then wonders why she’s on the floor.
– Got mad at me when her tail touched me after she hopped up on the couch where I was sitting.
– Got angry and growled repeatedly at the blinds for touching her.
– She came inside soaking wet, watched the door close, demanded it reopens, and when the weather hadn’t changed, she screamed at the indignation it was still raining. – psycholagny

My cat bit a glass plate and got angry because she couldn’t eat it then went to bother the fishes and fell into the fish tank. – Winterbrella

My cat screamed bloody murder because she thought she was alone but once I walked out she saw me and gave a cute little meow. – PowerOverTheSun

My greyhound finally caught up to a squirrel in the park before it went up a tree. She slowed right down, sniffed it, and then just watched it run up the tree. She seemed so disillusioned by the experience. – HiHoKermit

Our pup took a while to really understand how to scratch his face, and would just end up repeatedly kicking himself in the face with his back leg. He’s a little better at it now but still occasionally gives himself a bit of a kick rather than scratch. – MullGeek 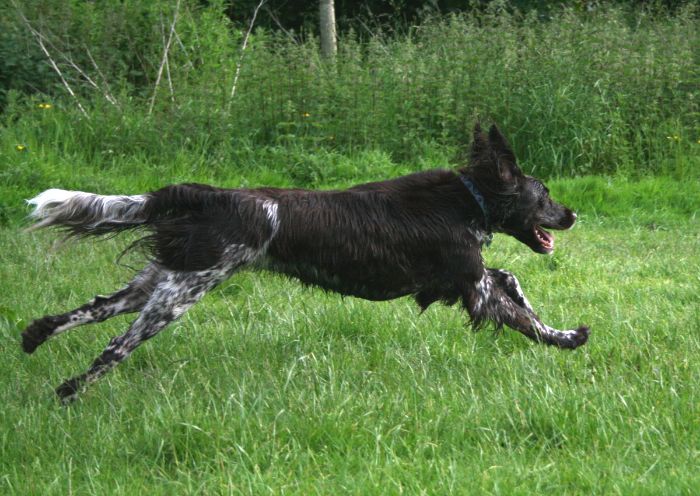 My dog was sniffing around a tree and bumped into a dandelion. He yelped and hopped away.I never let him forget that time he was scared by a dandelion. – buckut

What is the dumbest thing your pets have ever done? Why not share it in the comments below?