What was the age you moved out of your parent’s house? I hope it was as soon as you turned legal because living in your parents’ house is not the most fun when you get older. Any kid dreams of moving out of their parent’s house just by dreaming of all the endless freedom they would have lived on their own.

While living with our beloved parents is all fun and easy when we are young, it is not the best thing to do when we get older. Well, to be honest, it is not easy to live with parents when we are young either but we have to. They pay our bills! It is not very convenient because when you grow up, you have your own life going on and you want to live it exactly the way you want to live. As we get older, the need to have the freedom to live just the way we want grows more and more. It builds up enough that you want to move out the day you turn legal. Sometimes, or most of the time, parents would demand you of something you just simply cannot give them when you are of a certain age. Different age milestones require certain changes in your life. And when you get older, the change that is required is you moving out of your parent’s house.

Unfortunately, some people do not make it out of their parent’s house and they get stuck there. It looks like this guy’s mother is finding it hard to digest the concept of freedom for older people. To the extent that she even called her son’s boss because her son was not back from home on his regular time. Damn, that’s bad! Scroll down for details.

Mom is in need of help! 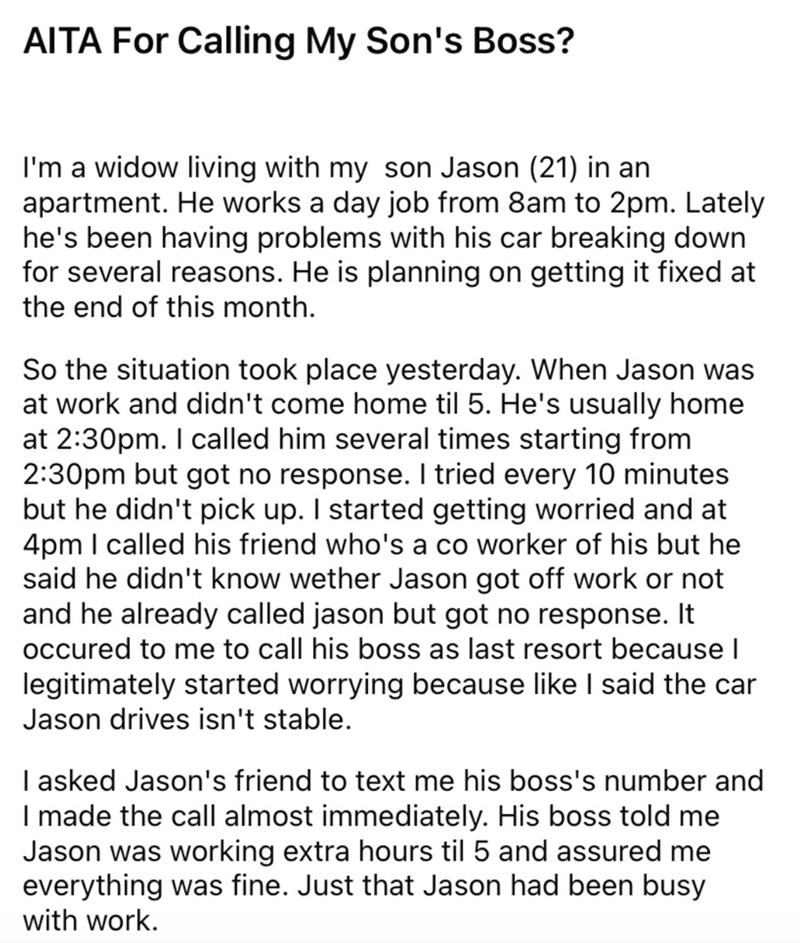 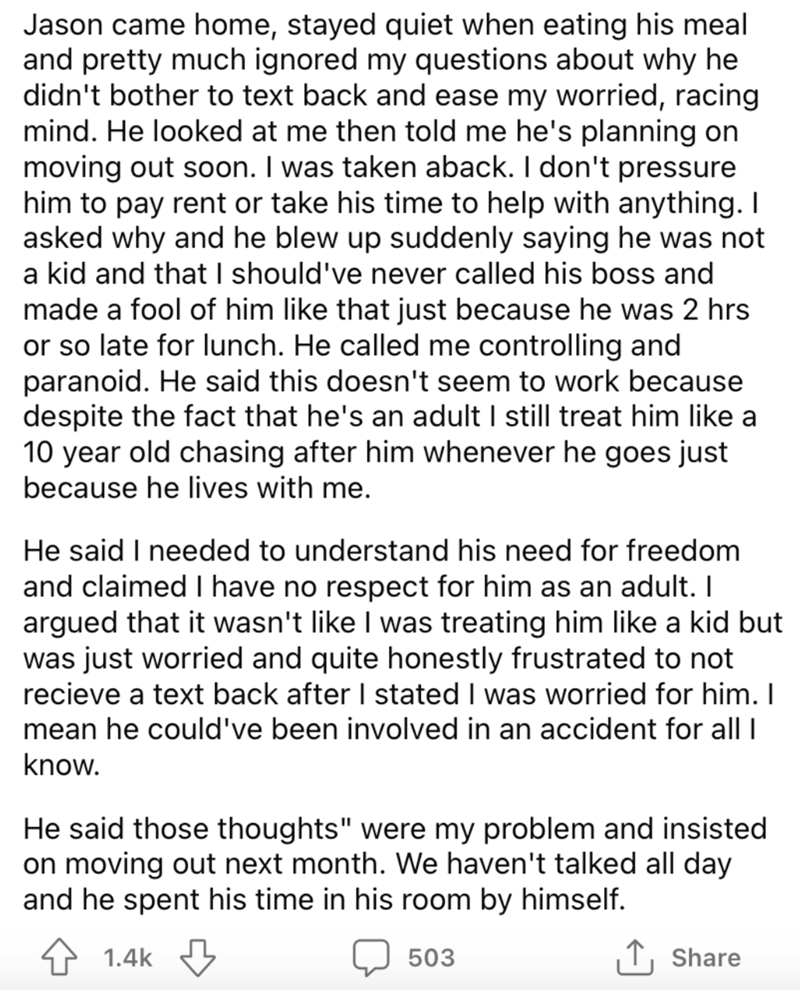 Comments and advices started pouring in! 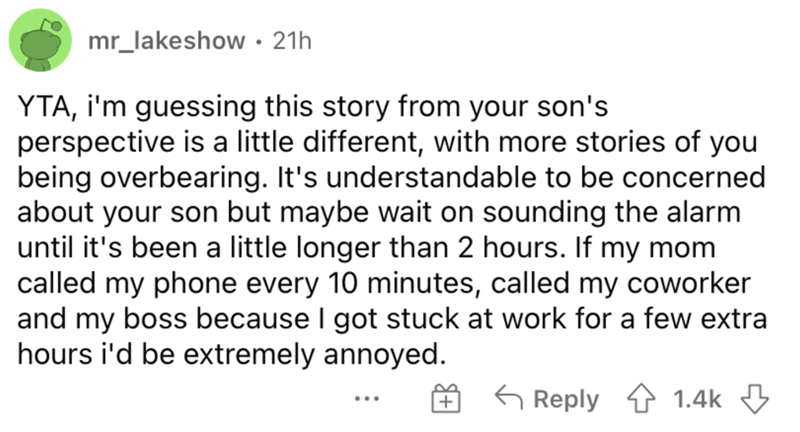 Some people were very calm and respectable when they explained exactly what is wrong with her behaviour. 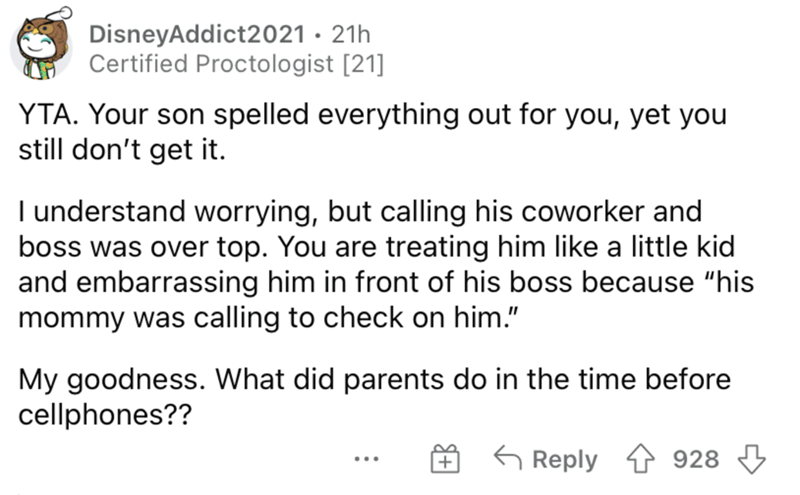 Some people got angered on the son’s part. And little harsh too, I must say! But to be honest, I think it was needed at this point. 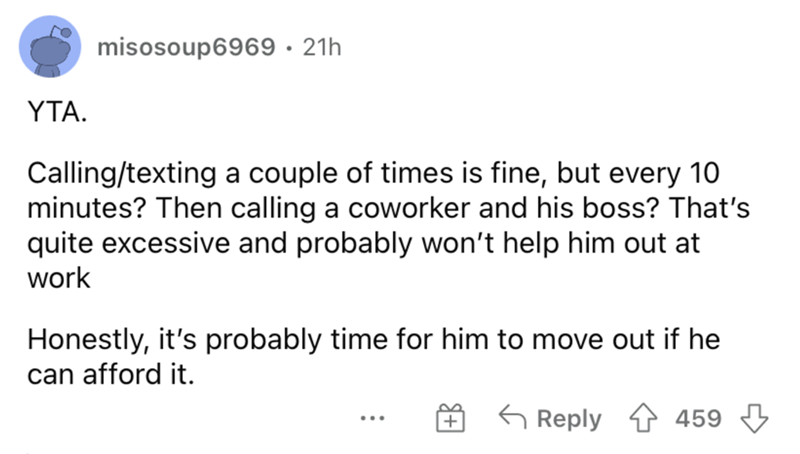 This person really just straightaway told this to her face! Ma’am, your son needs to move out. Period.

Ah, the good old ‘they need space’ talk. But this person hit it right at the mark. The son really does need all the freedom he has been lacking in his life. 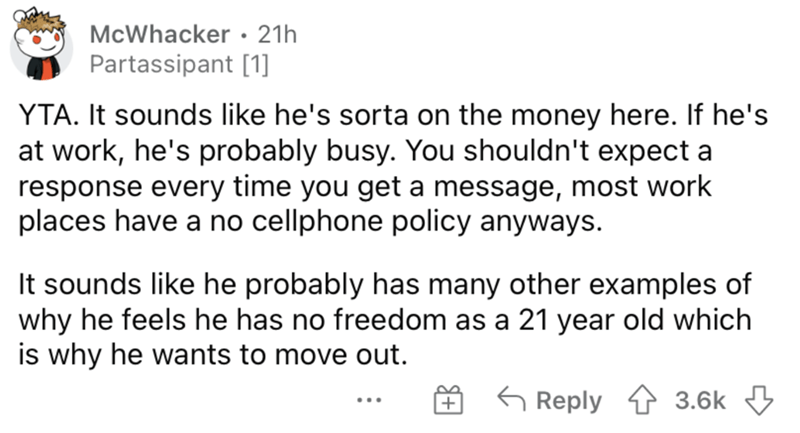 While some people showed their anger in the comments, this person composed himself and explained more reasons why the guy could not pick her call. I would say a little subtle but it’s okay, I guess we could take it a little slow on the old mother.

When parents assume you as a child, they really do get paranoid when you become an adult. Because they still picture you as a child who is being misled into adult stuff. 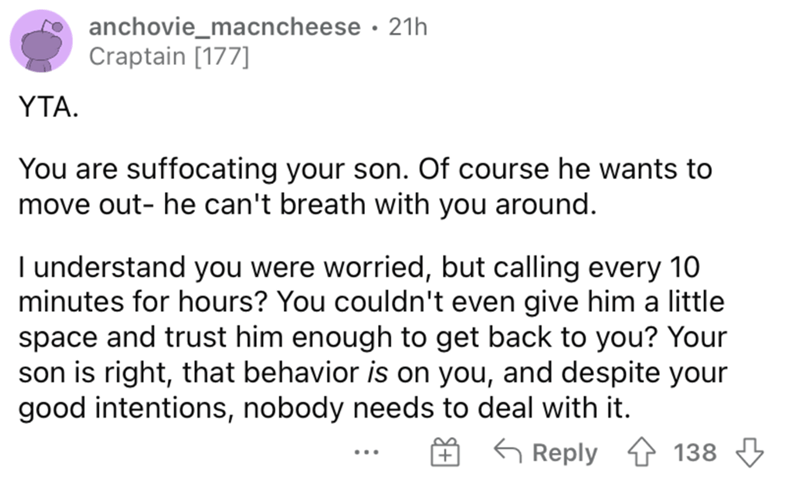 A little louder for parents at the backbench!

Sometimes, parents do not realize that they are controlling their children’s lives, and a reality check is required at that time! I am just wondering how they moved out of their parent’s house? Do they not remember being a child and how horrible it felt to be controlled?

The only way to keep people closer sometimes is to have a safe distance. Ironic, but I swear it works!

10. Calling out the obsession!

I can’t even how the guy must have felt going to the office next and being told by his boss that his mom called. Damn, that must be embarrassing…

11. Being okay with the unknown 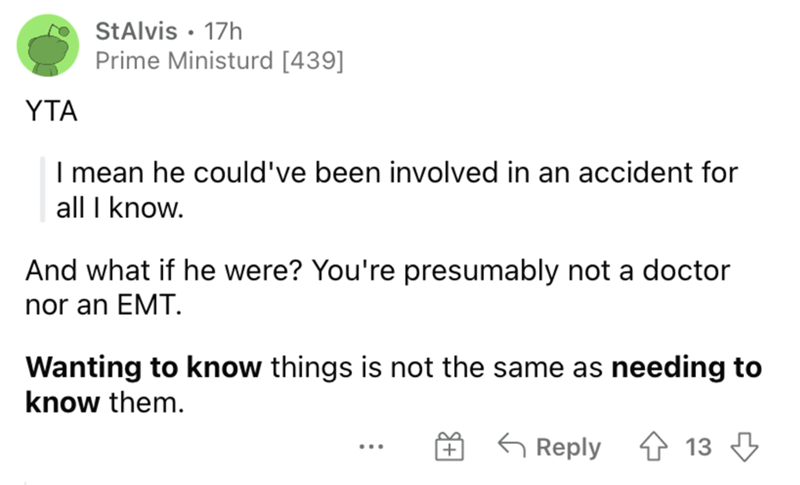 Could not have agreed more! Yes, the worst could happen. But sometimes you just need to have some faith in your children.

Wow, this person really just laid out the worst outcome of this situation! 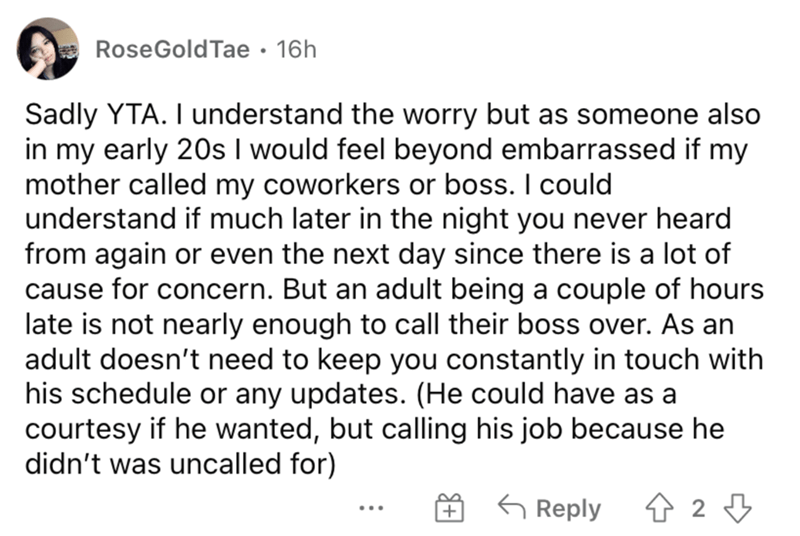 I like how this person is respectfully educating the mother on why it is inappropriate to go to this length for her 21-year old son! Parents get defensive when they are being schooled but when you do it respectfully, they understand. 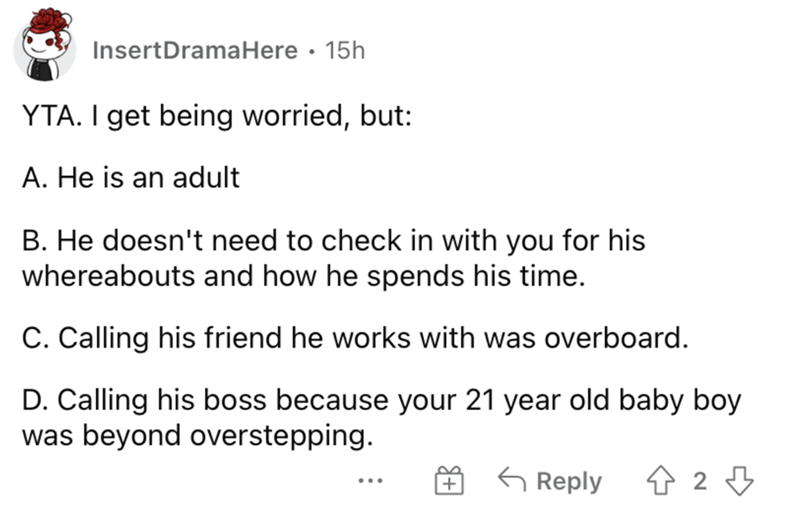 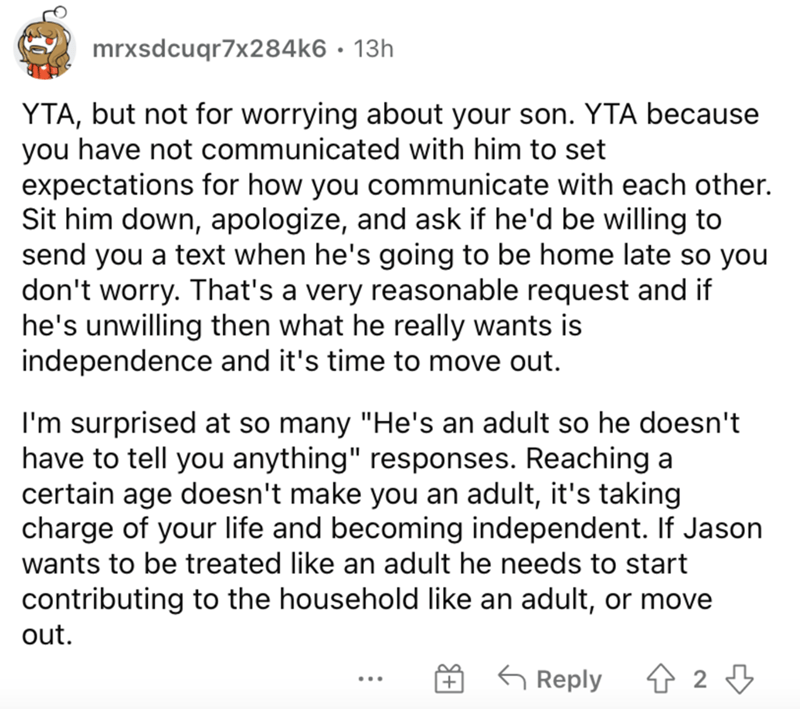 Some people were also very receptive to the mother’s part and gave more empathetic advice. Parents always see their children as their little babies whom they will care for forever. Some parents find it hard to realize that their kids are adults now. Parents make mistakes sometimes and it is okay!

16. Calling the boss was too extreme.

I mean, come on! Give your son a break rather than following him and keeping an eye on him everywhere he goes.

What this guy is saying is correct but at the end of the day, it’s still his mother. She can have her concerns but there has got to be a boundary as well. 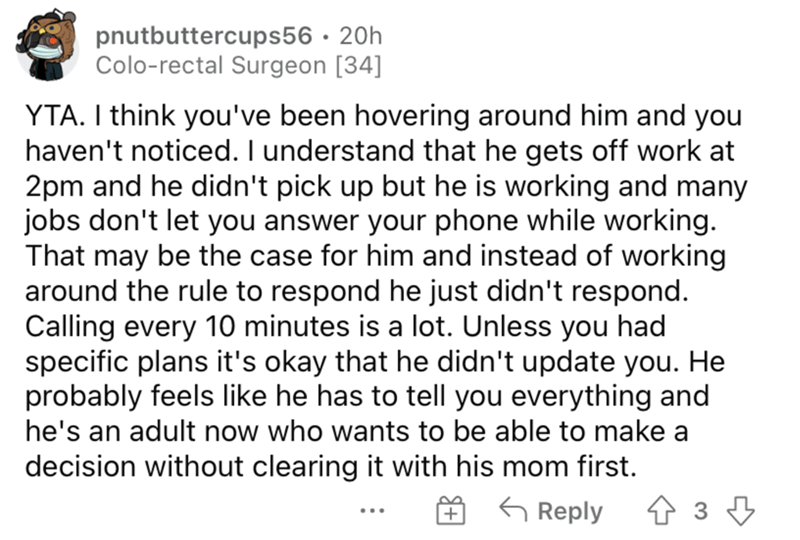 That was some good advice! At least there is hope. The mother reached out to the strangers online because she was truly conflicted about what to do. And she knew the only way to help her situation would be to ask other people the same age as her son for suggestions on what to do or what she could have done.

Now, we truly hope that she understands what went wrong on her part because it would not be good for the son if she doesn’t. It’s understandable that every parent has concerns regarding their children but once your kid turns a certain age and especially when they starting working, you can’t just keep hovering on their heads because they are trying to earn a living too! Every person needs space and even parents should respect that rather than baby-ing your kid all the time. Let them prepare themselves for the real world.

Anyways, we would love to know whether you had any such experience with your parents? Let us know down in the comments below.