Our teachers and professions hold a very significant position amongst the people that have aided our development and growth. While most of us like to believe it was entirely our own hard work, with no help from others, we forget to consider all the efforts our educators put into their schooling. If we really put some thought into it, you’ll remember your few favorite teachers that scored a position in your heart. Those are the ones that influenced you when you were a kid.

Some teachers mark their position in our lives like cement does on a surface. Their presence and their words are powerful and influential. They leave us with cherishable memories. However, some other teachers are memorable because of good moments. While we praise educators for their hard work, it is also important to acknowledge the ones that were inherently bad at their jobs. We all can think of someone when the topic of ‘bad teachers’ comes up.

A Reddit user shared his story about a lazy professor, whose habits and work ethic showed he no longer was putting effort into his teaching job. It was evident in his behaviour and mannerisms. He was not always available during office hours, students barely ever saw him during labs and he even used to show up concerningly late to class.

While all these issues may seem really big to you, there was a much larger issue at hand. The teacher used to fail half of the students in class and failed to reward the hard work of those students. Even the grading did not make sense. People with similar grades had different percentages that were far from each other on the percentile. While most students decided to suck it up, one particular student was not going to let this pass.

The Reddit user talked about how he did not find this acceptable and did not let this nonsensical behaviour slide. 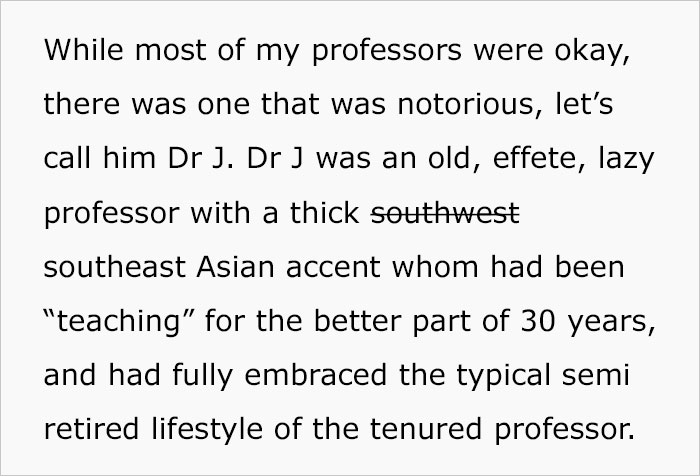 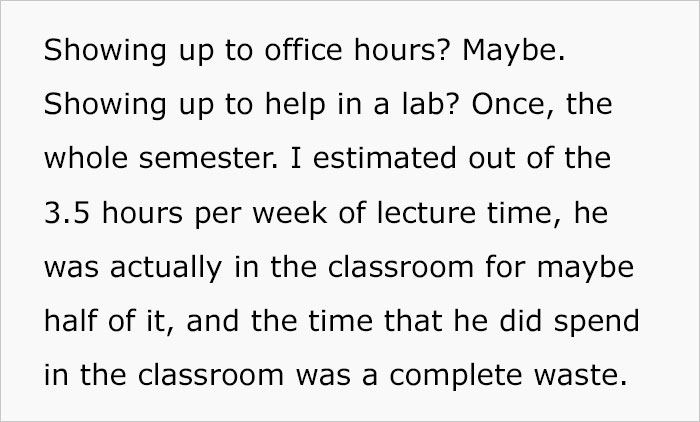 “I’m sure at one point he really enjoyed teaching and was a good teacher, which is probably when he got tenure,” elaborated the Reddit user on whether and why the professor was at the uni for the longest time. “It’s obscenely difficult to fire any professor with tenure. You throw on top of it him being a [person of color] in a heavy majority non-POC campus that has had a rather fraught history of kowtowing to race-hustlers along with so-called ‘racist’ incidents blowing up that turned out to be complete nonsense and not bigoted at all, it’s easy to see how he could slip under the radar.”

He added: “I also think a lot of these terrible college professors get away with what they’re doing through low expectations of their students and the imposing nature of the higher education machine. As a student, you look up at this institution and think ‘How could I stand up to this? What’s the point? They’ll just take his side anyway.’ I was lucky that I was a non-traditional student with a little more life experience so I wasn’t intimidated at all.” 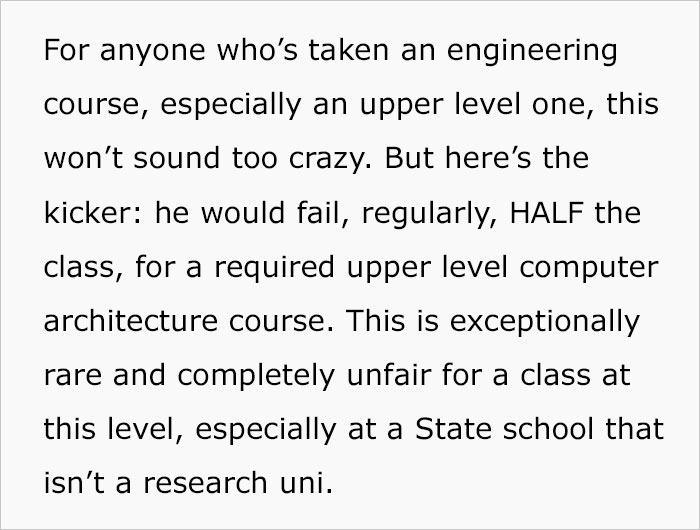 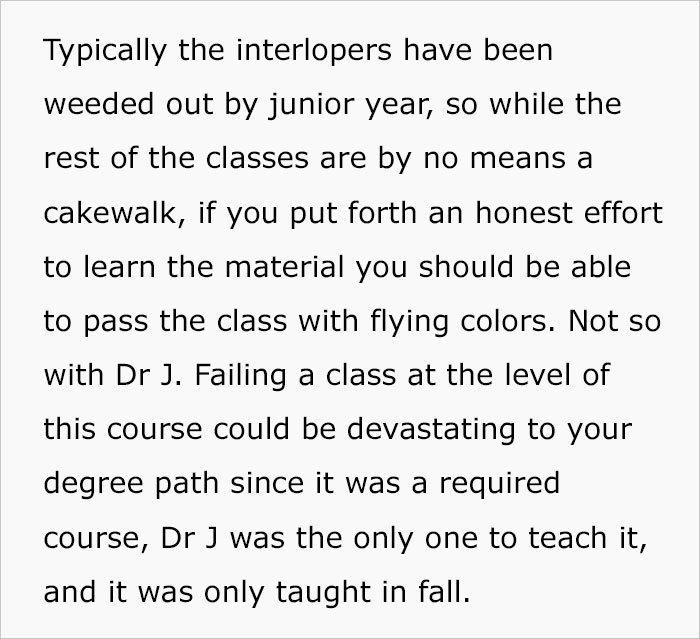 As you may have assumed, the user decided to take any action because he was one of those poor souls that this obnoxious professor decided to fail in the class. He could not believe he failed the class, considering all the hard work he put into it, so he decided to approach his professor regarding this. When he asked his professor what this was about, the professor responded, “[there are] many ways I grade my students and you failed. If you don’t like it, you’re free to appeal the grade but you won’t get it.”

This is when he decided to take it forward with an appeal. Not just one appeal, though. He gathered all the students who were failed unfairly in the course and made their appeal too. The department’s chair was stunned to receive more than 20 appeals from just one course. The case became stronger with other professors taking a stand against Dr. J too. Turns out, it was not just students who had a problem with him. 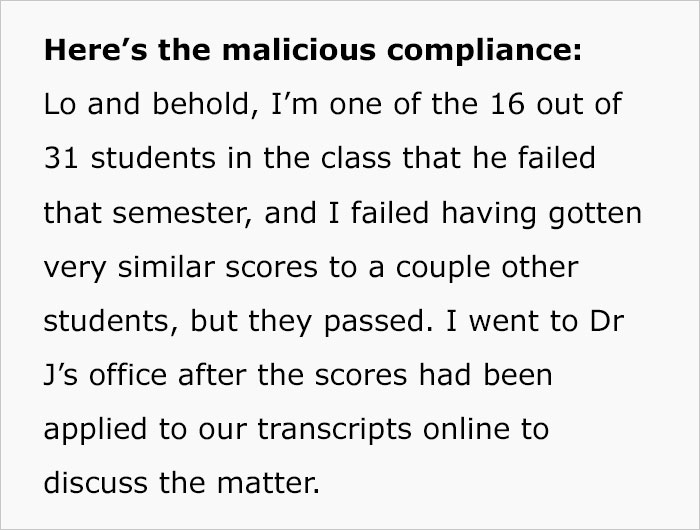 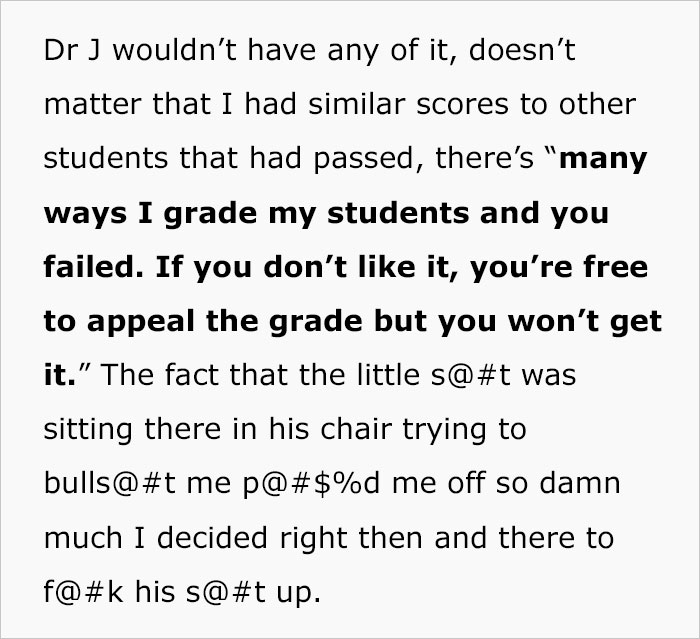 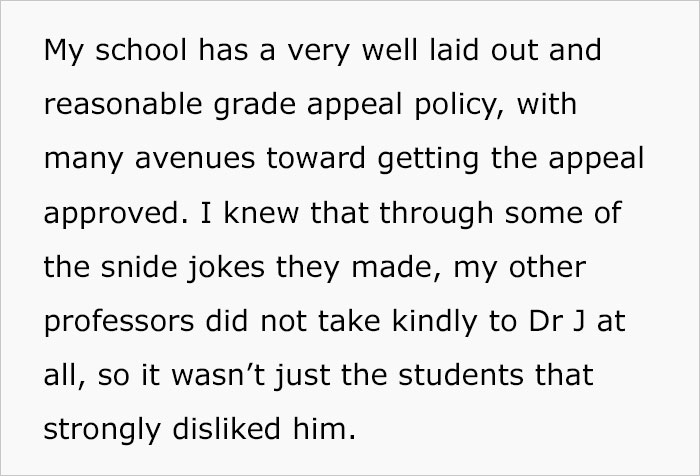 “The other professors seemed more exasperated than anything else, although there was a hint of schadenfreude there as well for the world of hurt that was coming down on Dr. J. Having to be lumped into the same ilk as Dr. J grinded them for a while,” Mal explained the other professors’ as well as students’ reactions. “My fellow students were nervous and scared as if standing up to Dr. J and making a stink would somehow make them go into some kind of karmic debt against the uni and it would catch up with them later. What does that say about our systems of higher education? What kind of leaders are they educating? No leaders I’d want to follow, that’s for sure.” 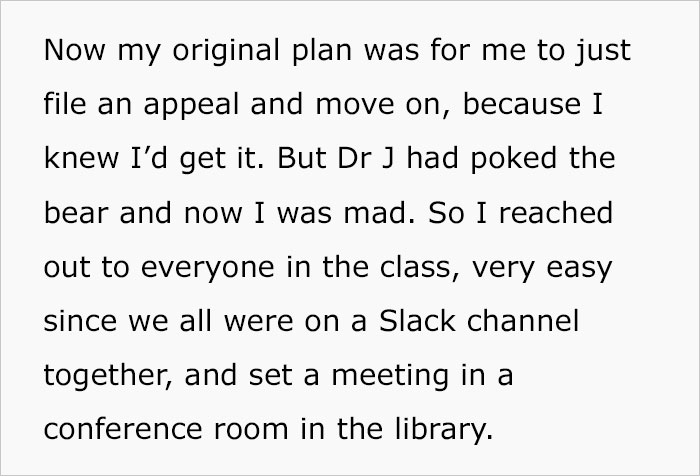 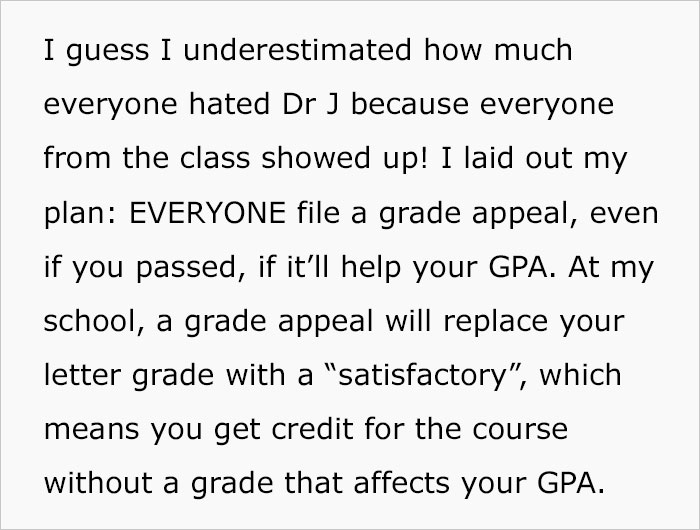 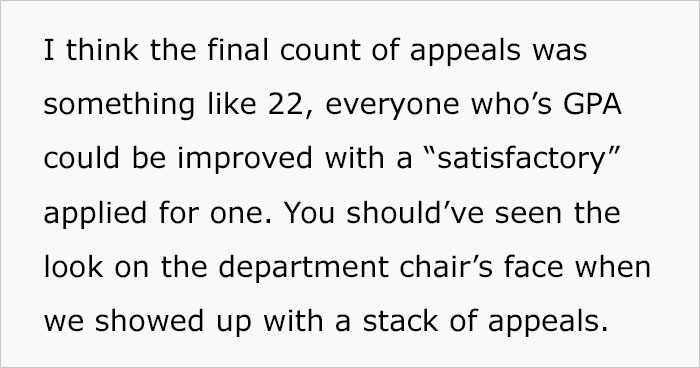 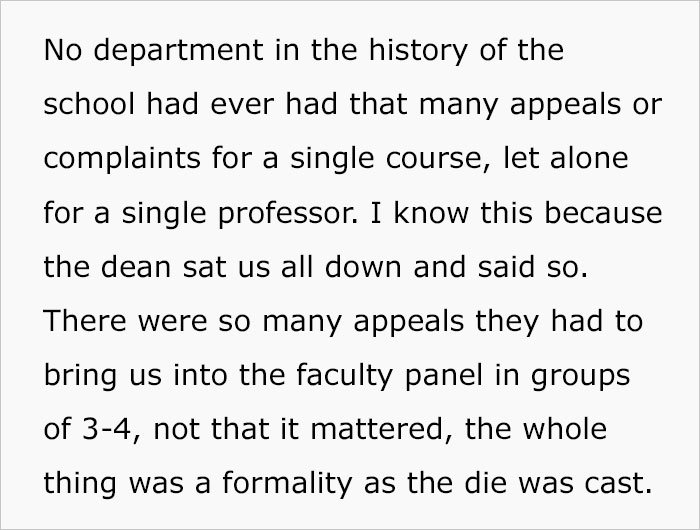 The final decision favoured the students, thankfully. Dr. J was given an official warning by the university on his mannerisms and behaviour. All the appeals made by students were approved by the administration. Dr. J was also made to let go of some of his courses. However, it is unfortunate and before the Reddit user took a stand, this obnoxious professor ruined the grades of so many students in past. He had made their lives a living hell by grading them unfairly and justifying it by saying “[there are] many ways I grade my students and you failed”. What a reasonable and logical response!

“At my college, the syllabus was supposed to be, sort of, the contract between the professor and the students. That was actually the basis of my appeal: we did, MAYBE, 30% of the work that was prescribed on the syllabus. None of the due dates matched up nor did the grading scale. Now, the syllabus wasn’t supposed to be taken at face value as some kind of binding contract, but professors were expected to follow it as close as humanly possible.”

“Dr. J threw it out the window the day he walked into class, which was his fatal fault. Had he simply followed the syllabus and not gone completely off the rails, my and my fellow students’ cases would’ve been much more challenging, although I’m still confident the result would’ve been the same.” 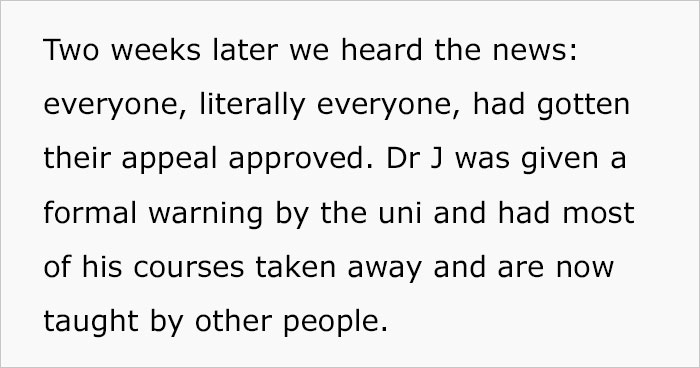 Unfortunately, bad professors exist everywhere and every student is in the same boat. We all have to deal with unpleasant teachers at least once in our academic career, be it in secondary school, high school, college, or even grad school. Bad professors are everywhere!

Following Mal’s post, a lot of people jumped in and shared their own experiences with horrible professors. 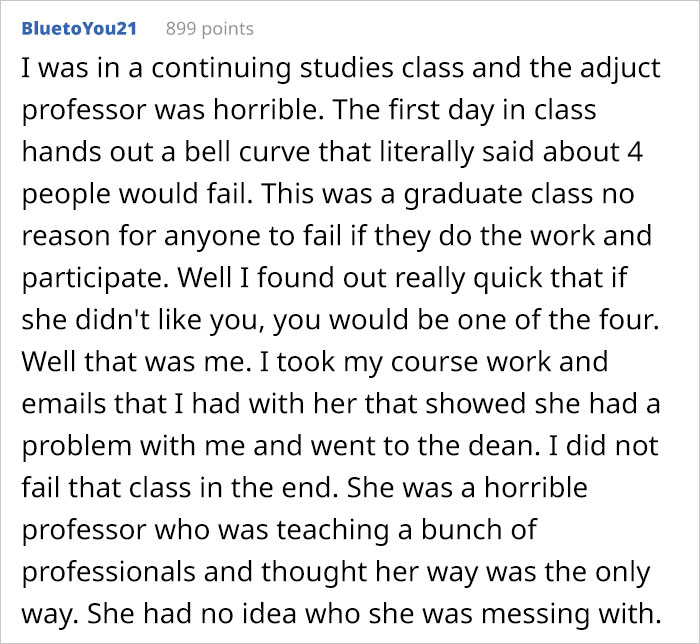 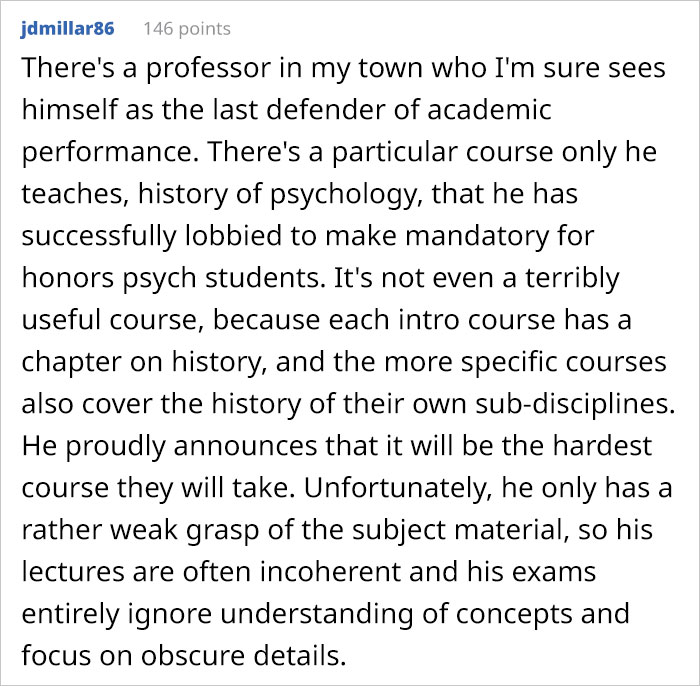 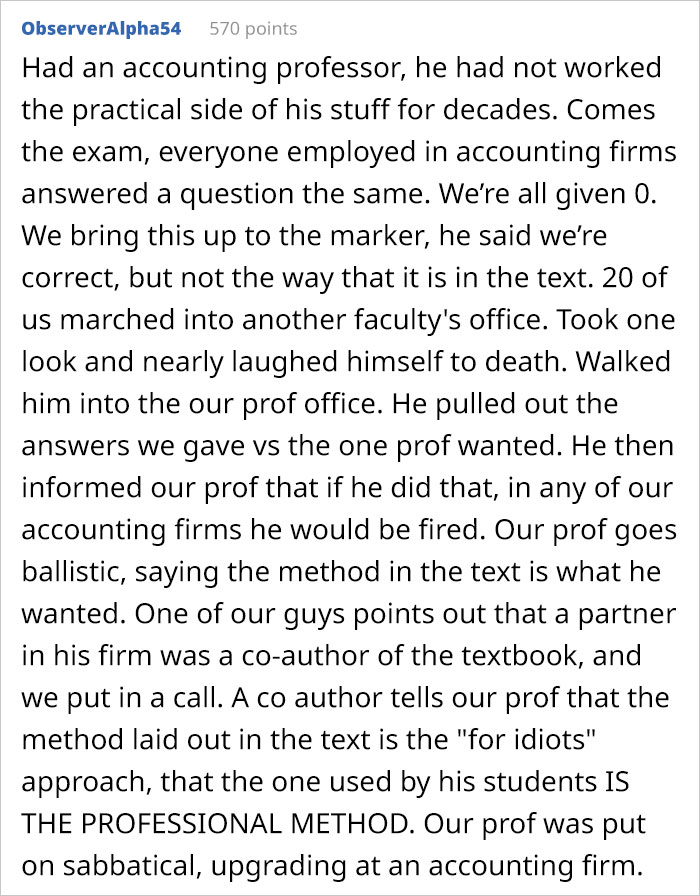 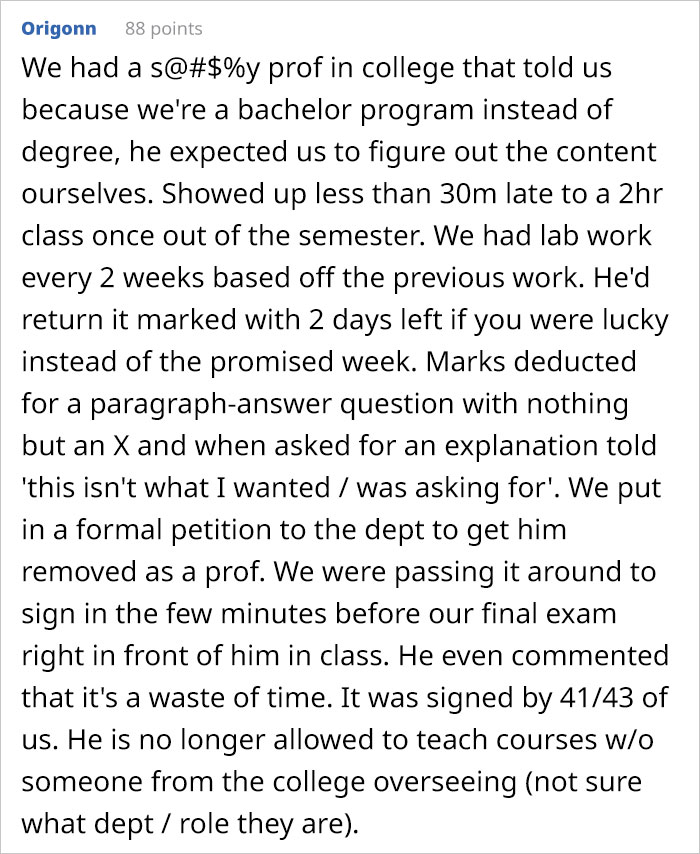 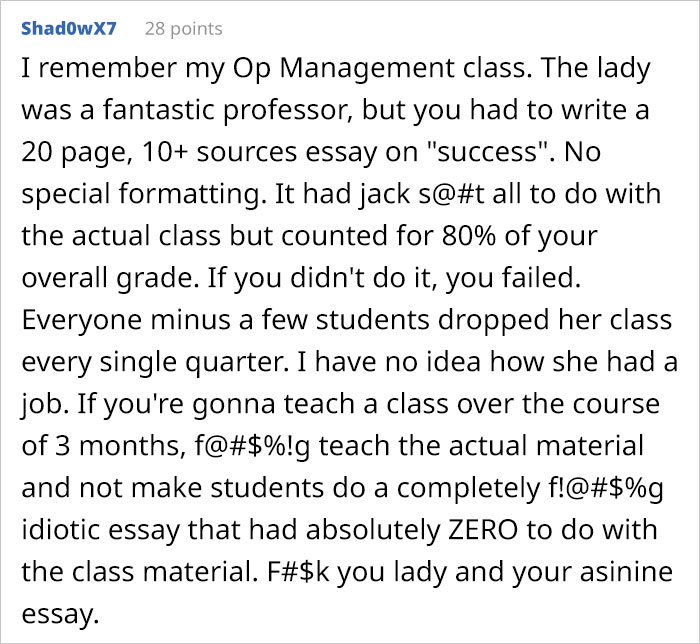 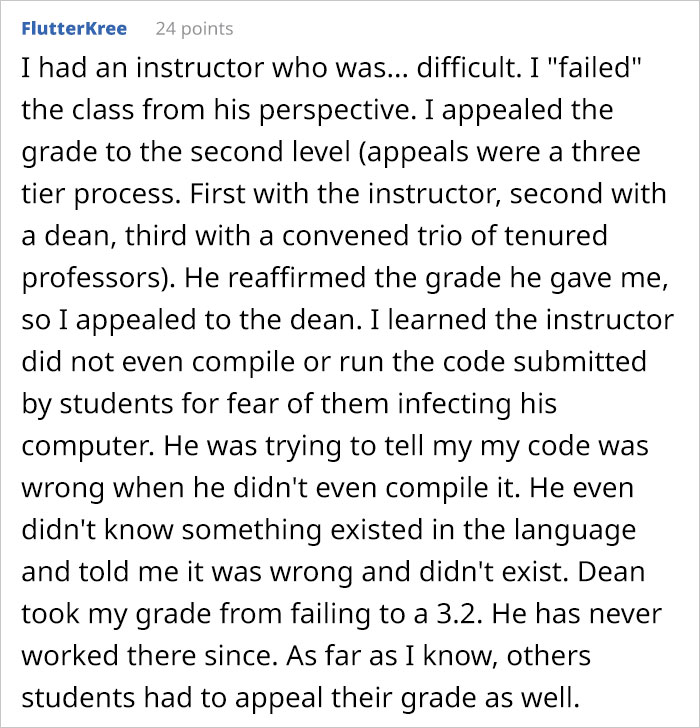 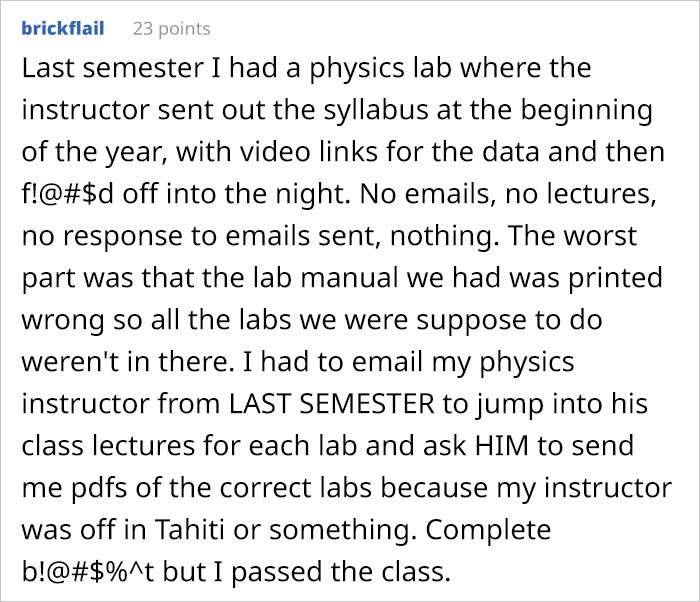 God, it would be so easy if all professors were motivated to make the students succeed and were not hell-bent on putting them down. It is the educator’s job to ensure students do their best and do well in courses. What do they get out of failing a student and making them miserable for no reason? Sometimes, staying in one job makes you lose your charm. A lot of professors stop doing well when they have been in that job for too long. Whatever it is that bugs them, students have to pay.

Have you ever had such an experience?