The world has become a dangerous place for women.

It isn’t even funny anymore. The sexism runs deep and if you’re a woman walking down the road, you’re probably afraid of every next man that crosses your path. I know a lot of people will come at us with the term “Not all men” but it is enough men to make us believe none of them can be trusted. Even online dating is dangerous for women. You never know the nice guy named Kyle holding a fish in his picture could be a serial killer. It’s just gambling at this point. You choose a guy you like and just hope to God he would not turn out to be a psychopath. Even if he isn’t a serial killer or something, he could just be a “nice guy.” And these two aren’t that far apart, let me tell you that.

This woman on Reddit posted “I joined a group about a video game, said my rank and main, and literally nothing else”. She shared screenshots of her conversation with a man who seemed normal at first, but then it when from 0 to 100 real quick. Guess what? He turned out to be a “nice guy.” What a surprise! Read the whole conversation down below:

He asked if he could talk to her privately, and gives her a list of mental disorders he has at the starting of the conversation. 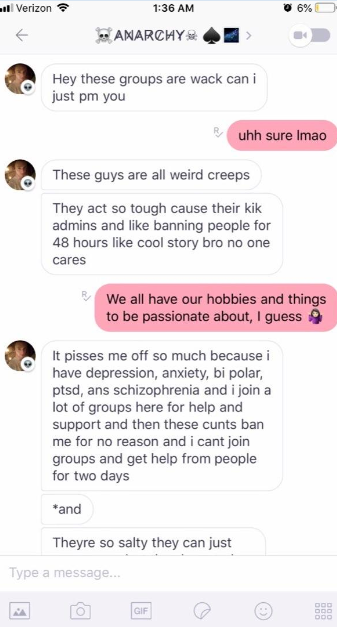 When she stops replying after him complaining about getting banned everywhere, he starts boasting about his McLaren and growing weed for a living. 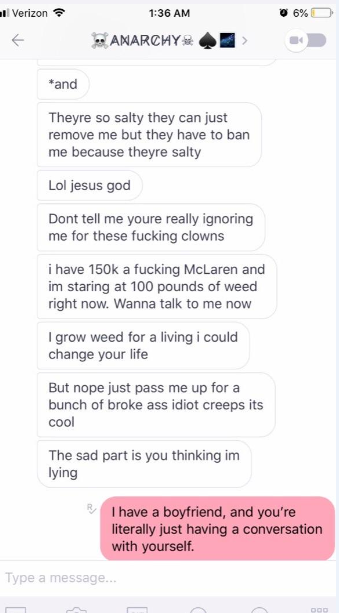 And when she replied she has a boyfriend and bugged him off, he just started insulting her and telling her he would harm himself. 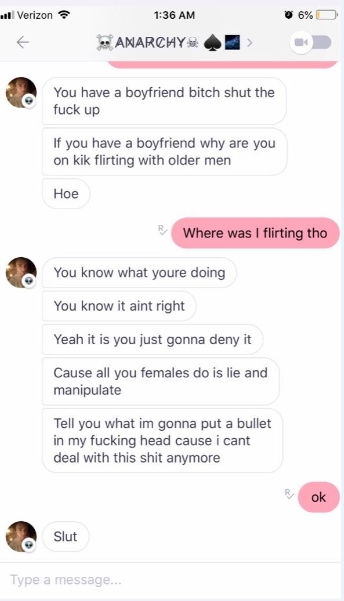 Now that was a rollercoaster ride. I am absolutely positive that this man needs help. Yikes! The Internet can be a scary place when you’re talking to strangers because you never know if sometimes it is a joke or not. This guy just seems like a troll though, there are millions of others like him on Tinder. These screenshots seem to be dated back to the Kik days. That was an era too.

Scroll down below to read comments from other Redditors:

You become what you hate.

The desperation does not end.

Having a mental disorder does not excuse this behaviour.

Really, I wonder why he gets banned so often?

Who wouldn’t date a weed farmer? I mean, come on.

One hell of a ride.

I don’t understand how she kept so calm and composed during this conversation.

Have you ever faced a nice guy? Are they all the same or do they come in different shapes and sizes now? Share your experiences with us in the comments below.