Not everyone likes dogs.

I know this may come off as a surprise but not everyone is a big fan of dogs. I mean while I personally find dogs very cute, I am not sure if I would be comfortable having them as a pet. And a lot of people see it that way as well. So while I do believe you should always help people, sometimes it really isn’t possible. For example, in this story the Aunt wants this woman to take care of her dog because she is on a cruise.

It honestly is not her responsibility but even if it was, there is a hurricane coming and she is busy taking care of all of that rather than worrying about a dog. This is honestly a bit more complicated than it sounds. The boarding shelter where the dog was supposed to stay at is closing for the hurricane so her Aunt really is in a bit of a pickle. I understand where her Aunt is coming from but guilt-tripping her is not the way either.

You can form your own opinion on this story by scrolling below and reading it for yourself.

Just from the title, I can safely say that it is not her fault and people seem to agree as well.

She is already taking care of a lot of things.

Her Aunt has already put a lot of pressure on her.

She really is expecting way too much from her and it isn’t fair.

She even went on to say why she can’t take the dog in and it is understandable.

She has kids and they aren’t a dog family so she isn’t used to it.

She also has a lot of stress on her plate right now with the hurricane coming.

Safe to say, it really isn’t the best time for her.

She has clearly been doing a lot for her Aunt.

The aunt really needs to take care of this herself. 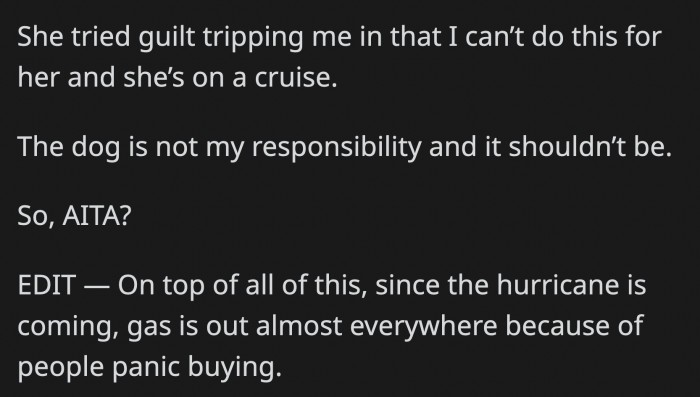 I can see that she really wants to help but it really isn’t possible for her. And while I feel for her aunt, she should not be guilt-tripping this woman. She is on a cruise and I think the boarding shelter would have known this so it is their responsibility. It is understandable that taking care of everything before the hurricane isn’t easy but it isn’t this woman responsibility and she should not feel bad. I can only hope that the doggo remains okay.

People in the comments were 100% with her on this.

A lot of people called out the dog kennel.

They really should be the ones with this responsibility.

I hope they have a plan for all the dogs there.

Not only that but her sister is also allergic so this seems wrong.

It would be good if she could help the dog somehow.

But at the end of the day, it really is none of her business.

And while she wants to help, the hurricane has put everything on hold. 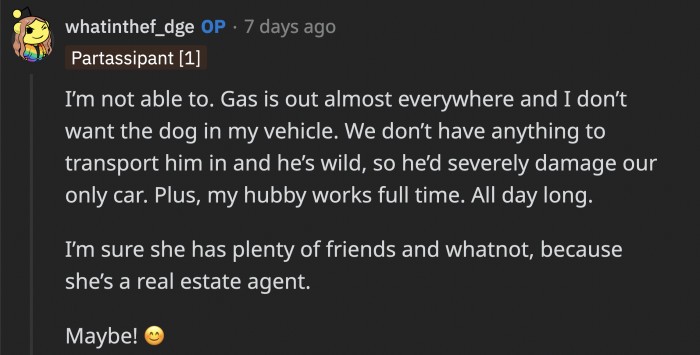 I understand where the Aunt is coming from and I feel sorry for her.

But she should have thought of another plan before she went on vacation.

Cat tax to brighten your day!

This bobcat was apparently found chilling in a tree in someone’s backyard when they went out. It seems like he just wants a few treats and then he will be on his way.

What are your thoughts on this story? Do you think she should suck it up and help her aunt? Or do you think it really isn’t any of her responsibility? What would you do if your family member asked you to do the same? Would you do the same? Comment down below and let us know as we always love to hear from our readers. Also, don’t forget to share this story with all your dog lover friends out there so they can join in the discussion with their opinion as well.