Nobody should have to tell someone about what they are eating.

When someone decides to go vegan, vegetarian, or pescatarian, they realize the rules that come with it. For vegans, you can’t eat any sort of meat or any product derived from animals. And most vegans do research before they go out to buy things. So it really isn’t anyone’s business what someone is eating.

I myself was vegetarian for a few years and I can understand how someone would make a mistake like this. Since sometimes you just eat without thinking. It can happen and it is alright. However, this incident really isn’t about that. It’s about stealing candies from children. After all, what is the worst thing a human can do? I would say it is stealing candy from a baby and this woman thought that was a perfectly okay thing to do.

But trick or treating is the most fun thing about Halloween after the costumes of course! 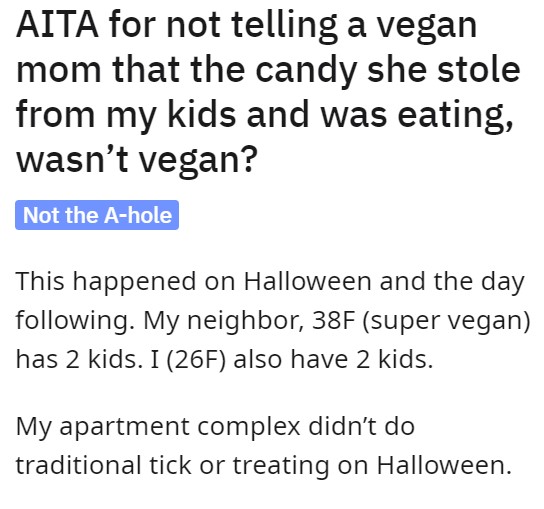 I can somewhat understand that, especially in this pandemic though.

That sounds like a butt load of candy to me. Hope they didn’t get a stomach ache. 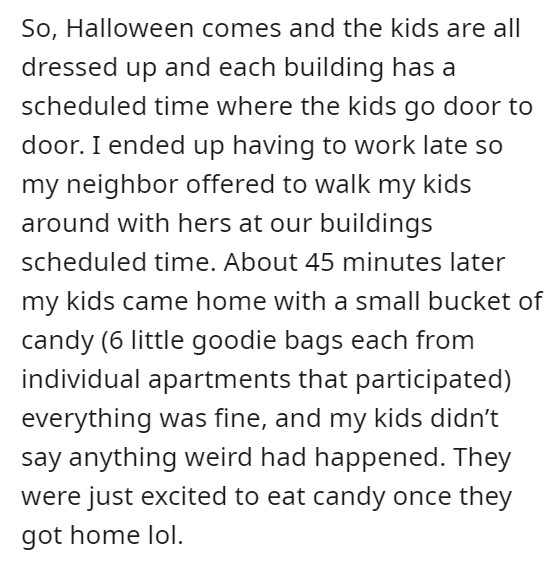 Okay, that is just plain weird. She does realize she isn’t a kid right? 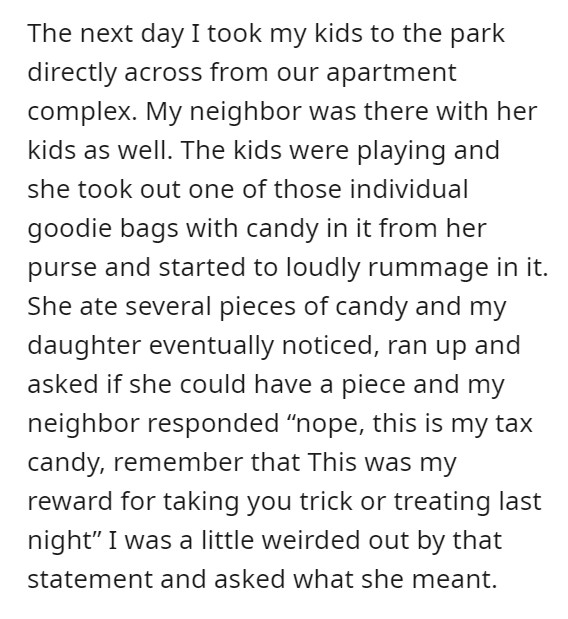 If she wanted to get paid for her favor, she should have asked upfront. 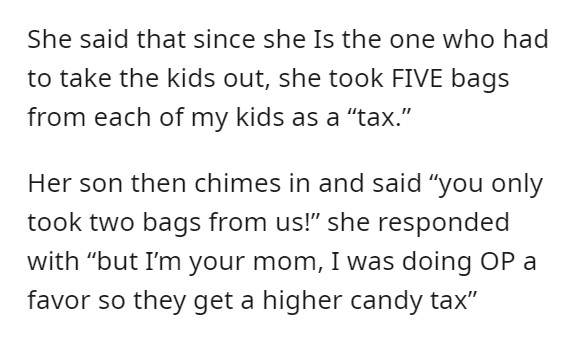 I am not and was never a vegan and even I know that little tidbit. 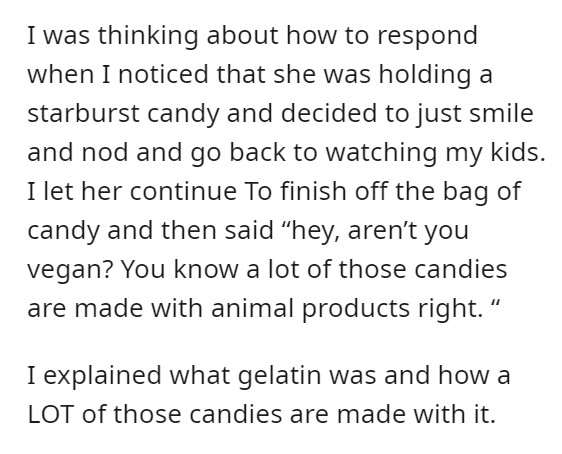 Honestly, how is it this woman’s fault that she was dumb enough to eat candy with gelatin in it? 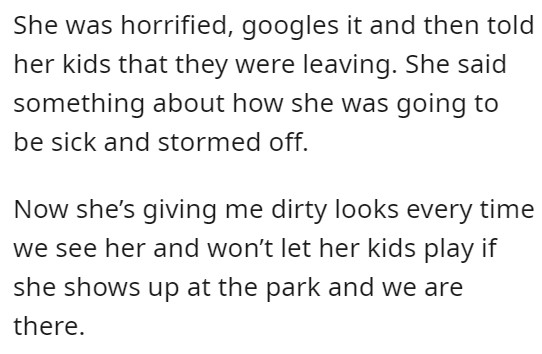 NTA gelatin is like the first thing you figure out isn’t vegan anyways and I say this as someone who did try veganism. It takes 0 effort to google that and also 0 effort to not be a dick to kids. –bratthecat

You might have been a bit on that side if she hadn’t stolen that candy but she did so you are clear. 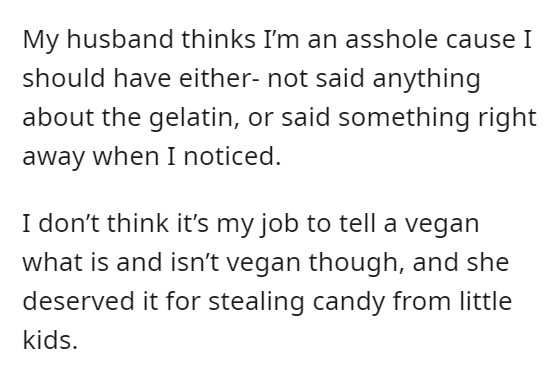 Well, that just makes it even more sleazy. If she wanted candy, she should have bought it for herself. 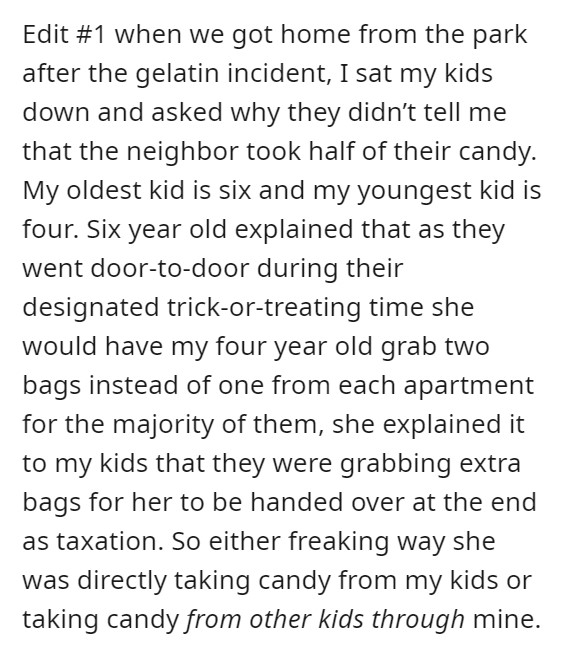 Now I get it. She is one of those vegans. No wonder she got so pi**ed about this. 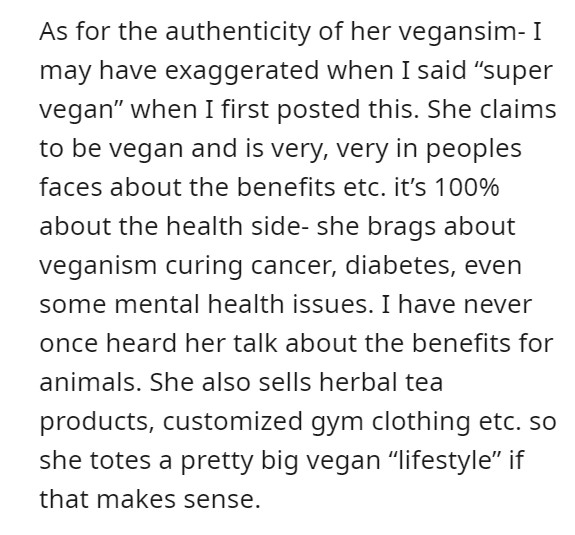 Even if she made a mistake, that does give her any right to be angry with you. 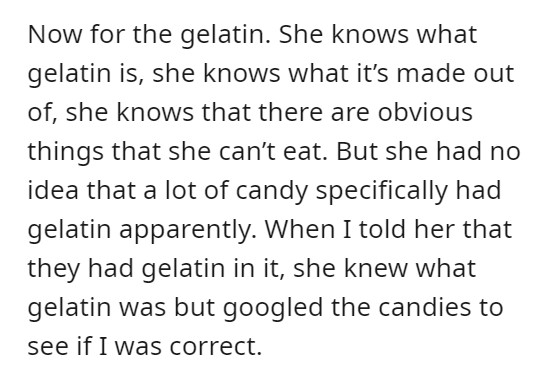 Most people would. After all, we have the whole world at our fingertips. 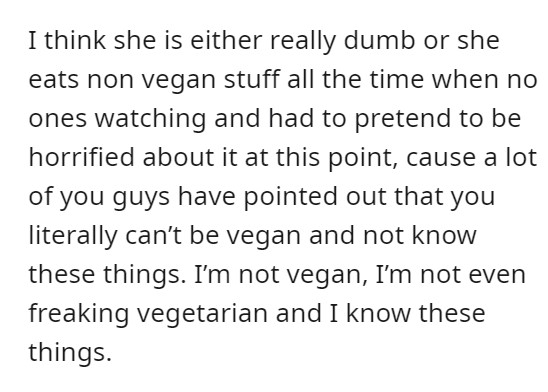 This. NTA, If she ever bothered to read the back of a Jello box she’d know it was made out of pretty much bene fat. She took 5 bags of candy from your kids! almost their entire stash!

That’s just rude as hell to do, I think you should get your kids two of those big bags of mixed candies, each, to make up for this act, it wasn’t fair they were forced to give up a large chunk of their treats when I was little my cousin did this and it was devastating to 10 years old Lil me. –WolfPetter42

I’ve never actually had a starburst so I wouldn’t know.

Some people just don’t like confrontation. I can understand that. 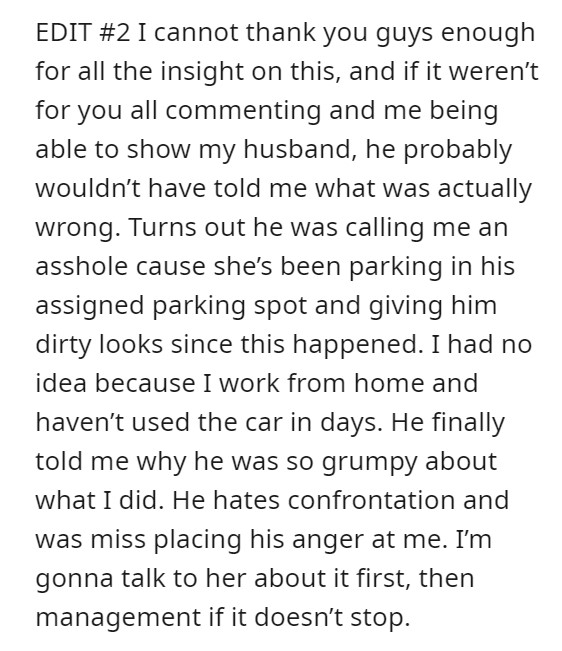 At least it all ended well.

What are your thoughts on this? Do you think she took it too far by telling her after she had eaten it? Comment down below and let us know.