Women don’t owe you anything.

Just because you showed basic human decency doesn’t mean your ‘female friend’ owes you her body. See how wrong that sounds? And yet so many people think they are owed a lot more because they are a ‘nice guy’. I am sure you have already heard countless nice guy stories but today we have something a little bit different.

You know how many nice guys are always going on about the dreaded friend zone? Well, we are going to dissect what it really is and why so many guys hate it. I mean having more friends doesn’t seem like a bad thing to me. And just because you like someone doesn’t mean they are obligated to like you back as well. However, nice guys never like to hear this so why not explain it through some jokes that are bound to get their attention.

Do these guys have any male persons they are friends with? And if so are these male friends required to have s*x with them because just being in the friend zone hurts? –elfin

#2 I mean that is technically correct. 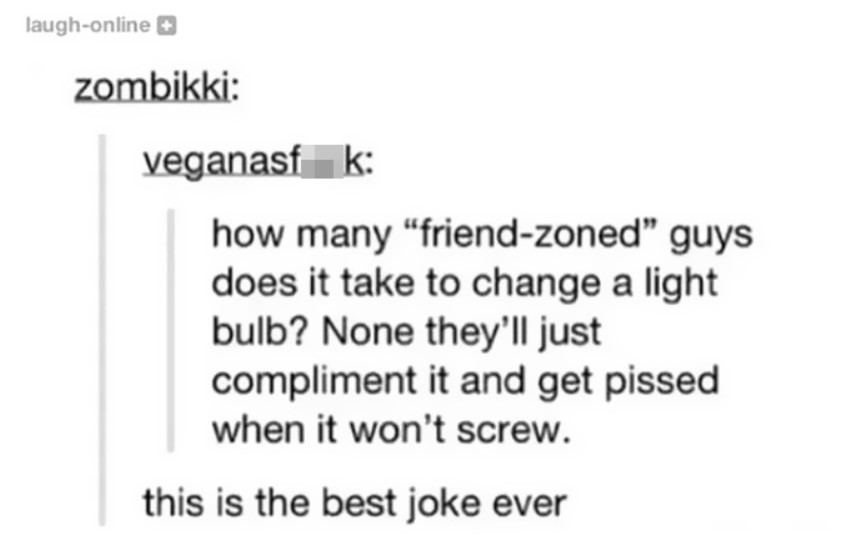 #3 I have been in that position and it is truly horrific.

#4 As it turns out, it is bad in the long term if you are too nice.

#5 Yes, this automatically makes her the bad guy.

#6 Now that I think about it, I’ve never heard women complain of the friendzone.

Yep. I had a huge crush on my male friend back then. We were pretty close, have common interests, joined the same community, spent lots of time together, even went to movies and restaurants together.

But when I said I wanna be his GF he flatly said no. That was brutal but I respected his choice and withdrawn myself. He was being nice to me doesn’t mean he likes me back. Why is it so hard for some men to understand this? –miten sasmita

#7 These guys just want to still feel special even after being rejected.

#8 We see another ‘nice guy’ in the wild being caught by the unintentional lure.

Even a guy who has a crazy, stalking ex-girlfriend usually isn’t afraid of being injured or killed by them. That’s the difference between M and F. –Arenite

#11 And you wonder why so many people don’t trust you.

#12 People just love to shame women for anything and everything.

#13 She isn’t wrong. Friendship is an honor that shouldn’t be given to everyone.

#14 But some people get ‘excited’ by the challenge they need to ‘conquer’.

#15 Does there always have to be a reason?

#16 Maybe they will finally listen?

#17 They just want to have something to hold over their ‘female friends’.

#19 Only if everyone thought of it that way.

#20 I know many guys that would like to argue with you on that point.

No , but some homemade cookies would be nice after helping her paint her apartment and pet sitting her psychotic cat for a week. –Fred Burrows

#21 I don’t think that is the solution but you do you.

#22 That does actually sound like a great place to live.

And you come on way too strong, you are very insecure, you have a sense of entitlement, and you’re clingy. –CatWoman312

#28 Such a nightmare indeed.

#29 I wasn’t aware I was friend zoning people left and right.

Have anything else to add to these tweets? Comment down below and let us know.