We’ve all heard this pretty old saying that the way to a man’s heart is through his stomach. It doesn’t mean that there are some sort of special arteries that go directly to the heart from a man’s stomach, but it is merely a figure of speech. It means that most men are just foodie and they have a special place in their heart for the woman who cooks them delicious food. It may sound funny, but it is true. Men do fall for hot looking and good cooking women. That’s one of the reasons why women love to cook for their men. This not only earns them respect and appreciation, but it also makes them feel more empowered and valued.

Some women use this technique to take charge of things and be the boss or to trap or impress a man they fancy. This may sound like WTF, but it’s happening out there in the world. We read a post in the Subreddit “Am I the a*shole” where the OP posted about her husband’s coworker who not only brought food for OP’s husband, but she also called and asked what he would like to eat the next day. This made the OP super uncomfortable and furious that she couldn’t stop herself from telling her off. Scroll down to read what happened exactly. 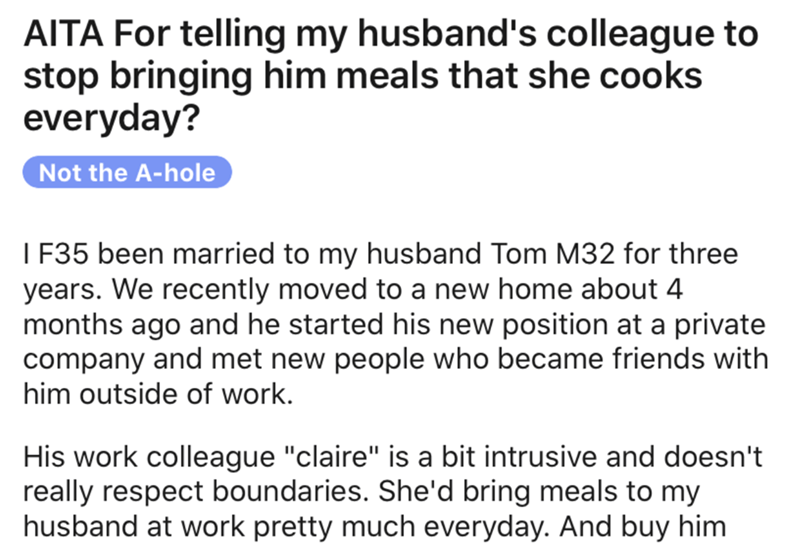 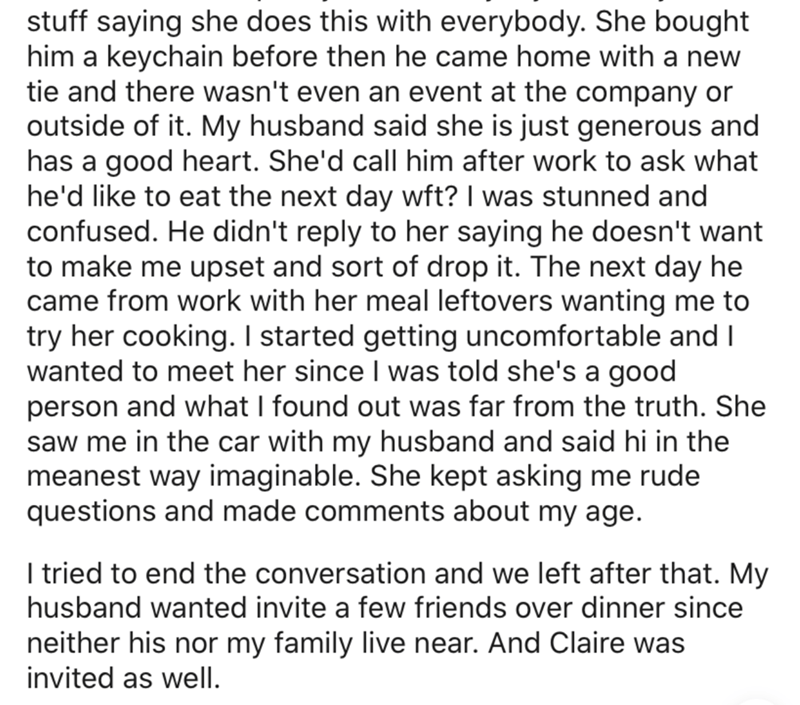 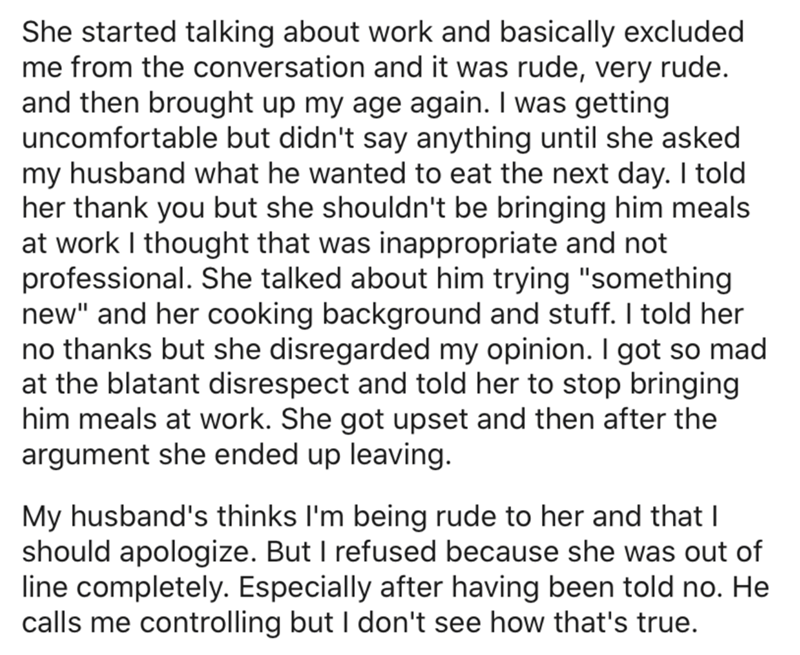 Claire was clearly being rude. 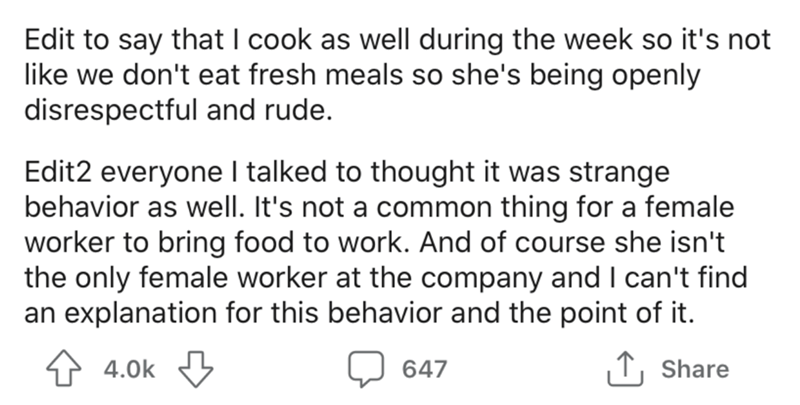 The OP did nothing wrong. She just said what was bothering her and Claire’s behavior was unacceptable. It’s strange how OP’s husband didn’t bat an eye at how that woman was constantly disrespecting his wife and trying to cut her off at every chance she was getting. The OP in no way was being disrespectful to Claire. In fact she was trying to hold all that anger and annoyance in, until Claire took things too far. If anyone should apologize, it should be Claire. She was clearly acting like a jealous girlfriend trying to bring other women down. OP’s husband is too dumb to not understand something so obvious. Claire was trying to impress him and grab his attention by cooking for him. It’s one of the ways how some women try to influence men. Reddit posts are not fun without comments from Redditors. Scroll down to read what they had to say.

The OP needs to work on her relationship with her husband. If anyone, Claire and the husband are the a*sholes. 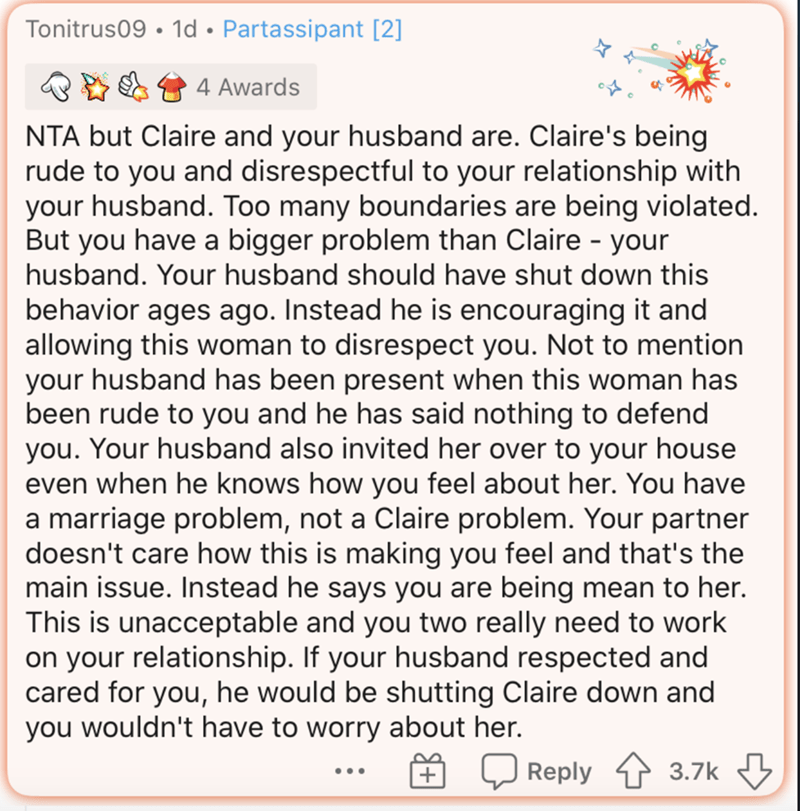 The OP’s husband should have protected her and taken a stand for her. 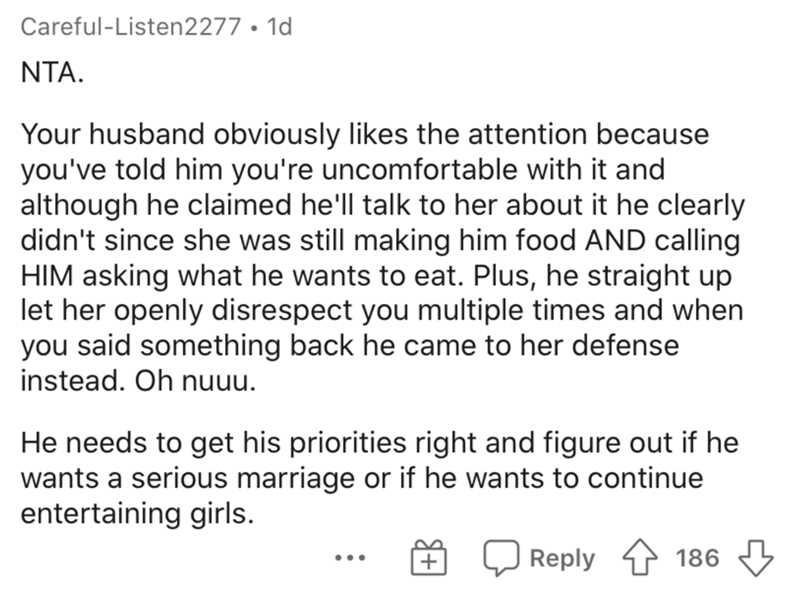 The line has been crossed.

Husband is involved in an emotional affair with Claire. 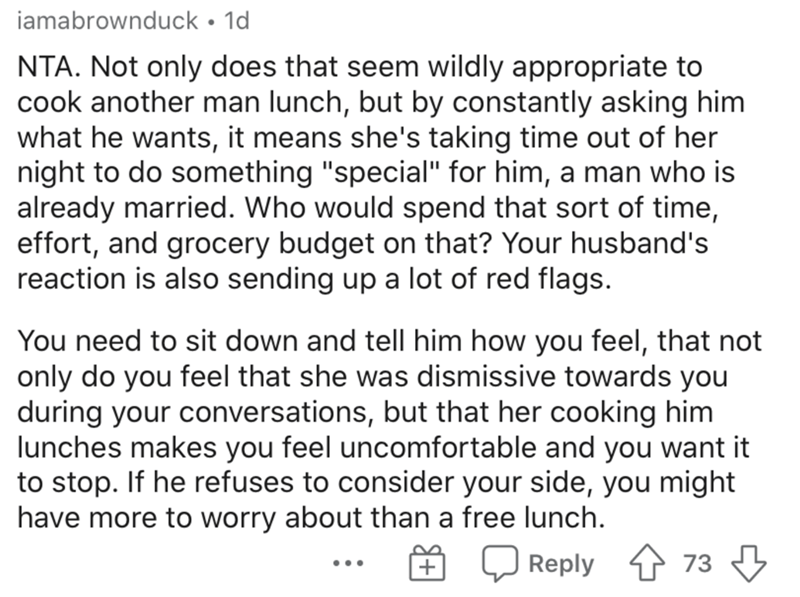 She’s trying to “butt into” OP and her husband’s marriage.

Claire is a danger to OP’s marriage.

Husband is the biggest issue.

A woman shouldn’t bring lunch for a married man. 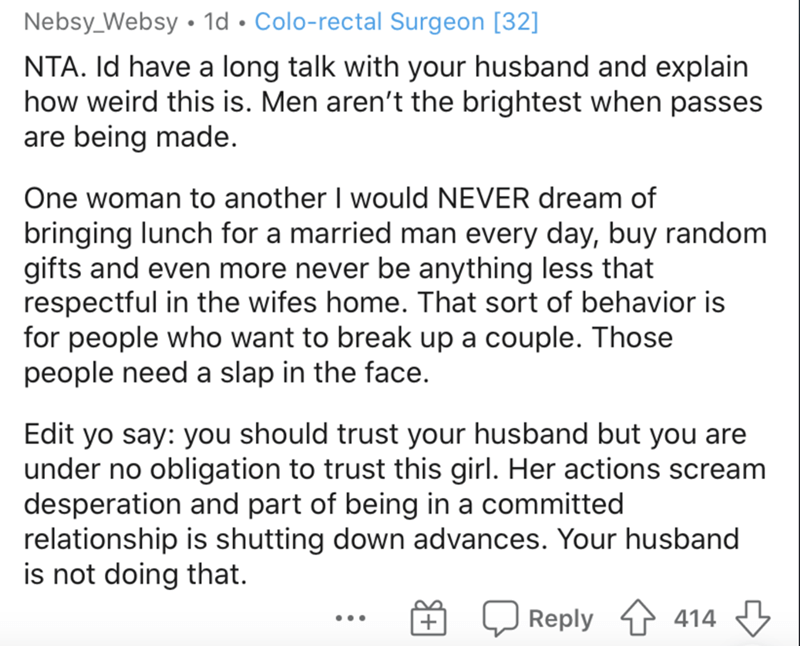 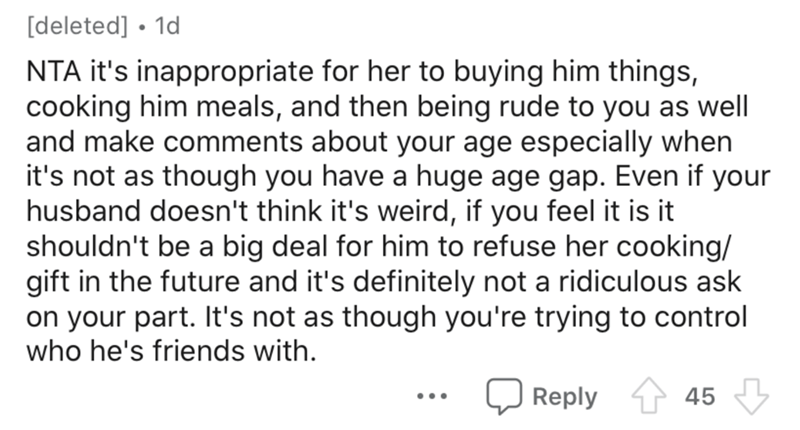 Claire needs to back off. 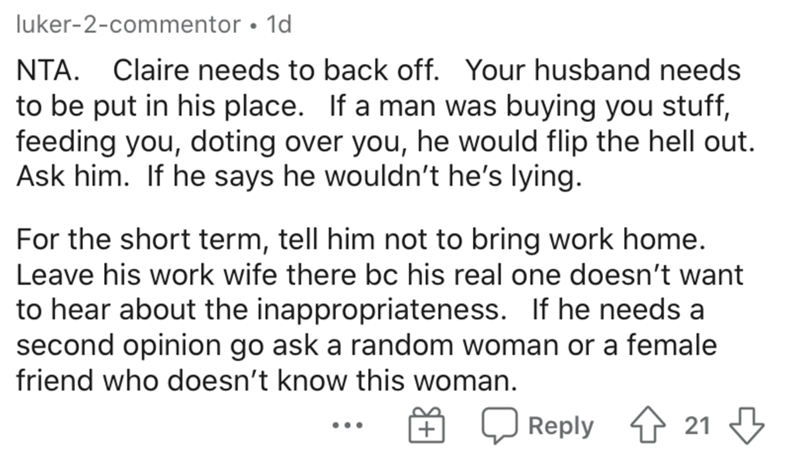 Husband is either clueless or likes attention. 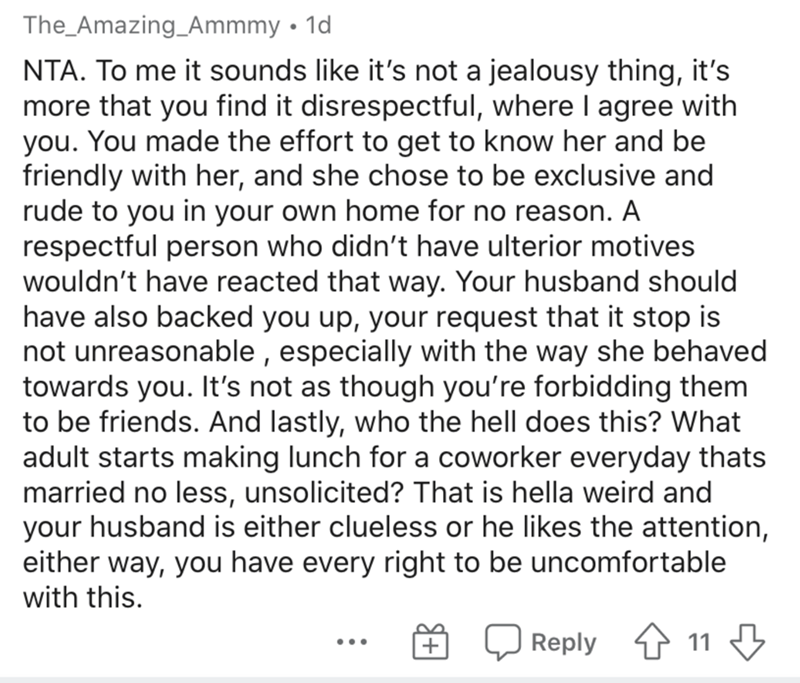 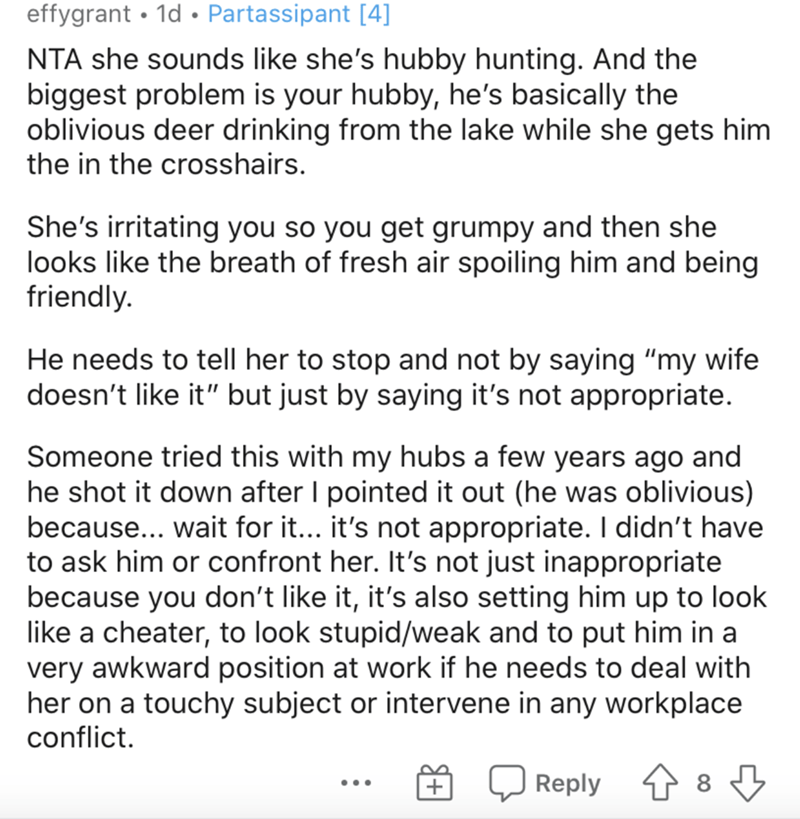 Husband is also at fault. 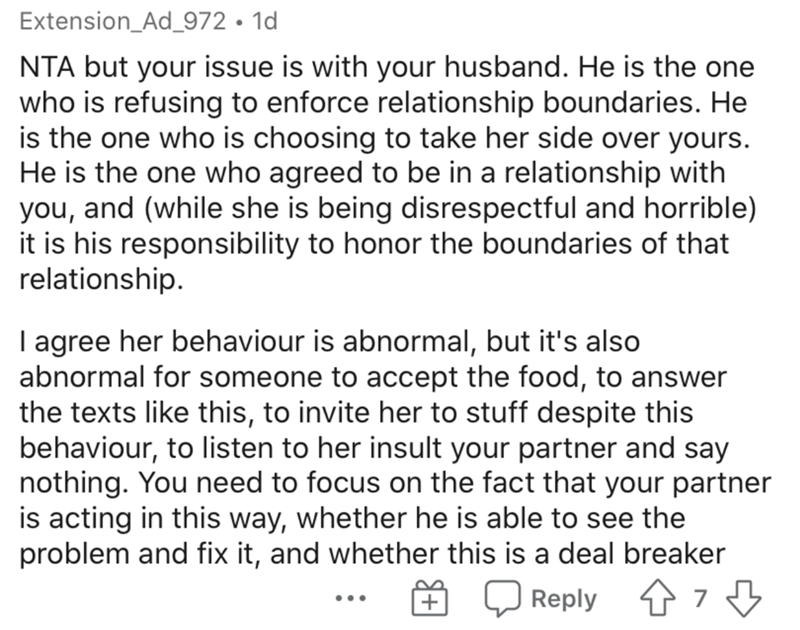 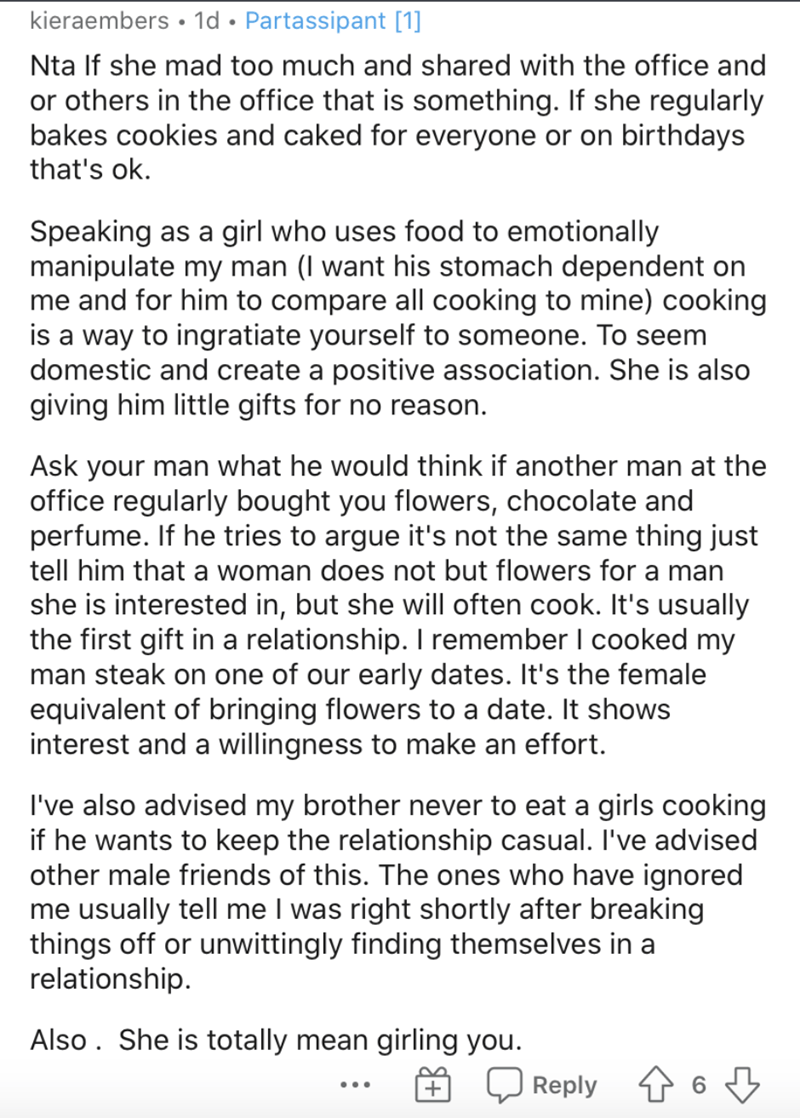 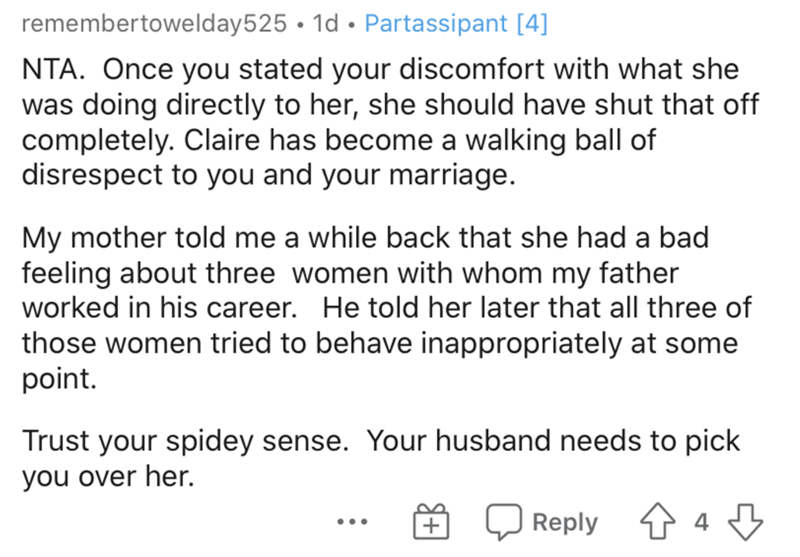 The husband should be warned and stopped before it’s too late. 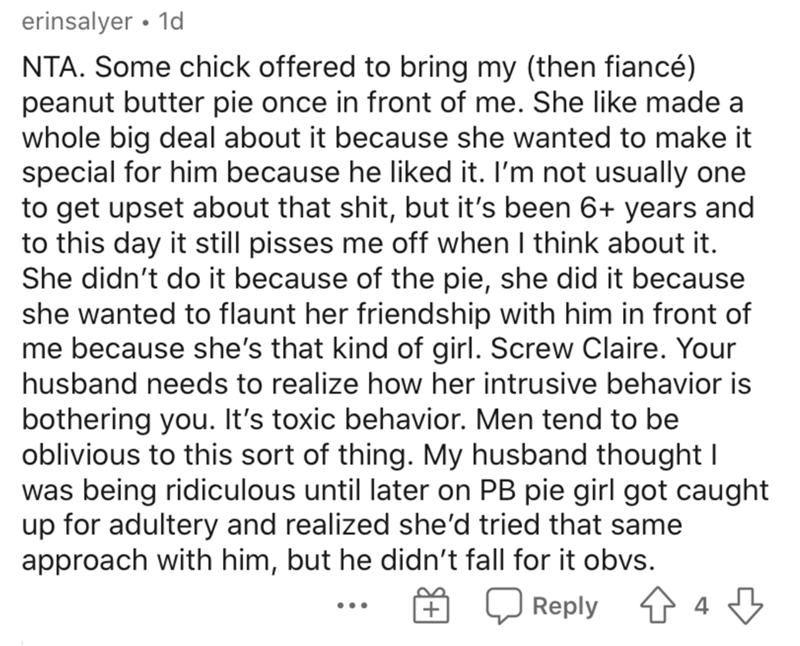 Some events in life are like little clues of the upcoming storm or a threat before a grave danger. One must live life with eyes wide open and keep track of all those clues and red flags. What do you guys think? Share your thoughts in the comments below.