Just because you are dating someone, does not mean you get to control them.

A lot of people confuse love for possession. When you fall in love with someone, you accept them for who they are. You support their decisions and value their opinions. However, some people think just because they are in a relationship with someone, they can control the other person’s actions. Your significant other is an independent individual and you have no right to control them or tell them what to do. That is highly toxic. If you dislike something about them, communicate it with them and try to come to a compromise.

However, some people refuse to change their narrow-minded and toxic mentality. This is usually in the cases of most men trying to control what a woman can or can not do, what she can and can’t wear, or how she lives her life. This is a huge red flag, and if your partner does this, be aware!

This man on Reddit asked if he was wrong for not liking how his girlfriend dresses for work. Read the whole story below:

The man thinks he isn’t wrong, but his friends and family are extremely disappointed in him. 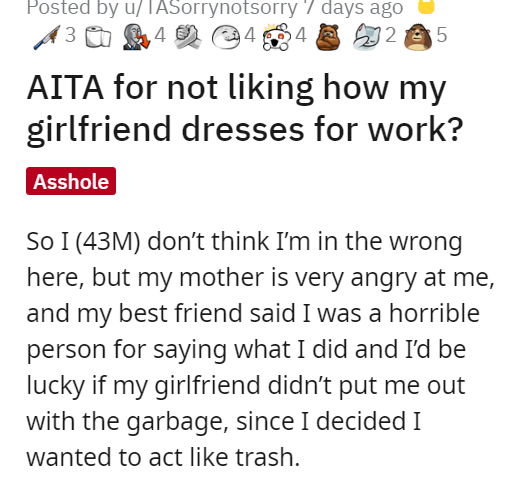 His girlfriend is a very dedicated preschool teacher, who dresses up in creative ways to amuse the children. 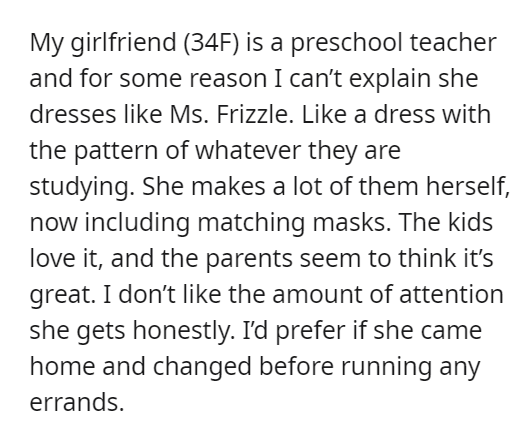 So one day, she went out with her boyfriend’s mother in her work clothes and he didn’t seem to like it. 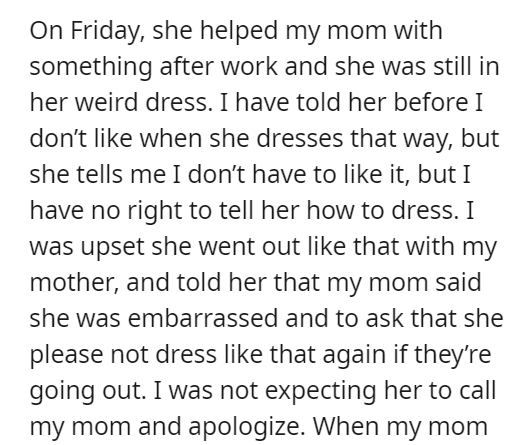 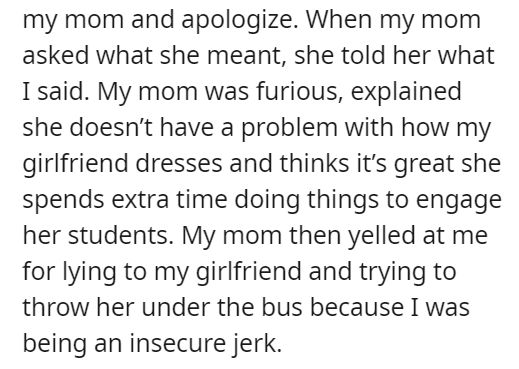 They got into a massive fight and even his friend took his girlfriend’s side. He still thinks he wasn’t wrong. 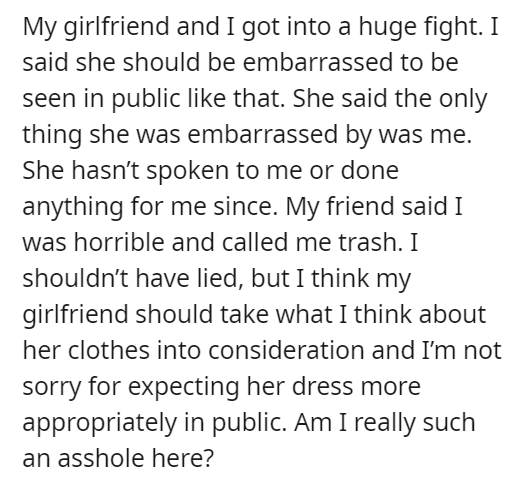 And, not surprisingly, they broke up.

The guy is extremely narcissistic. In my opinion, it is none of his business what his girlfriend wears to work. She is a dedicated woman full of life and he is just trying to suck it out of her. She deserves better and the man needs to change his mindset because he is being extremely toxic. 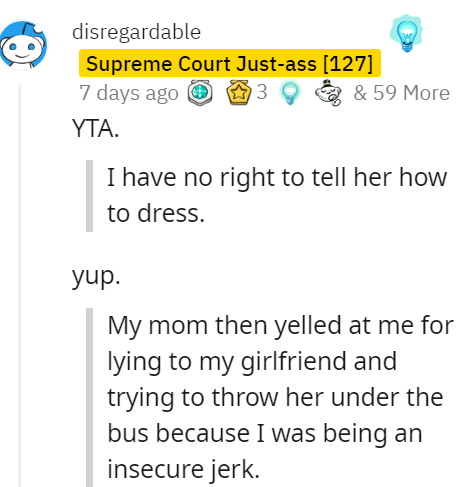 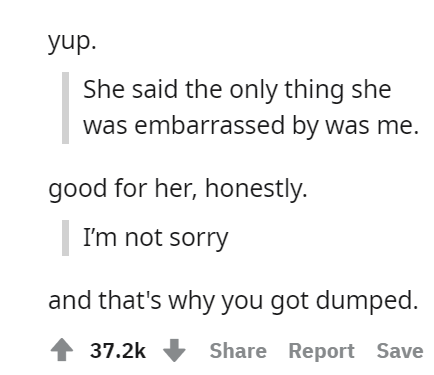 Nobody took the guy’s side and called him out for acting entitled. 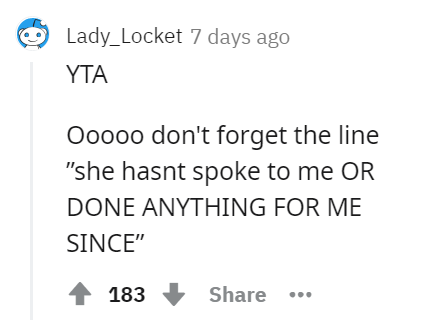 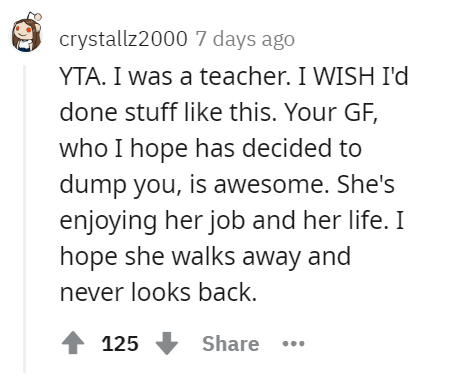 He definitely needs to learn from his mistakes. 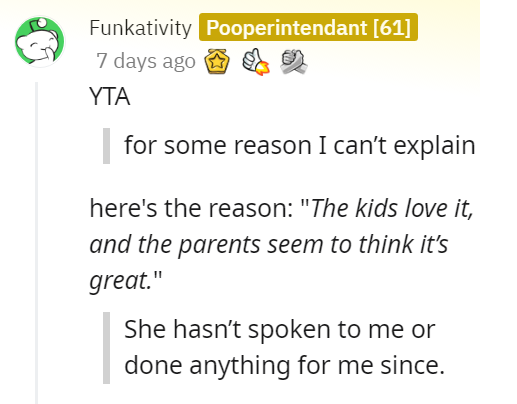 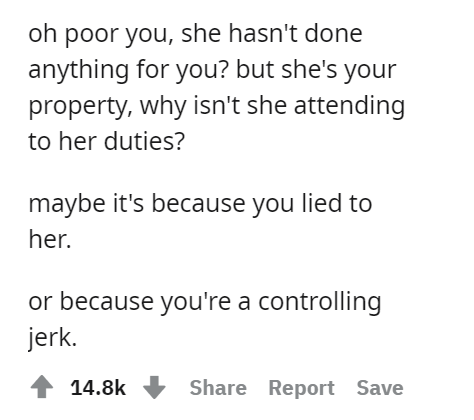 He only cares about the perks he is losing. 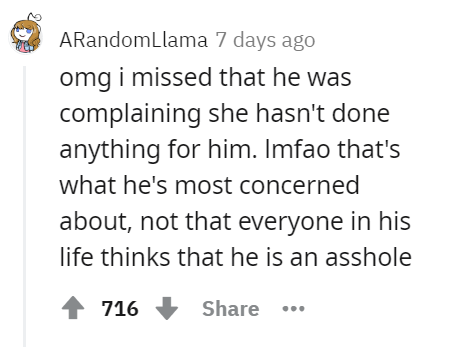 This person predicted the breakup before it even happened. 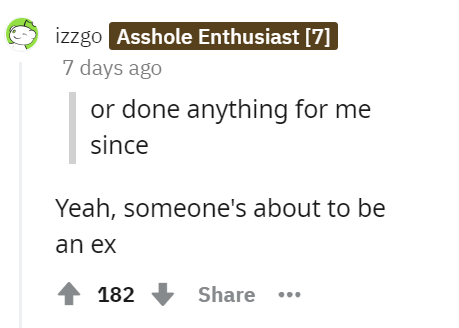 He just lost a gem. 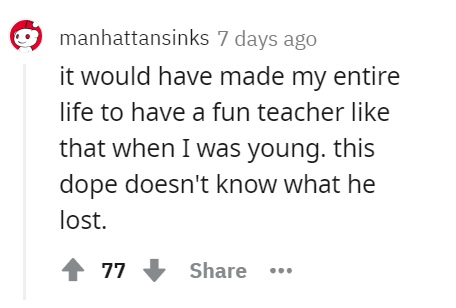 His mother was right for being furious with him too.

Who do you think is in the wrong here? Did he deserve getting dumped? Share your thoughts with us in the comments below.