This is drilled into our brains since we are mere babies. However, blood is not the only thing that makes a ‘family’. After all, there is such a thing as adoption that exists. And it has made many people around the world happy. However, it doesn’t always turn out that way. Many kids always wonder why their biological parents didn’t want them. So it can be heartbreaking when they learn the reason. After all the truth is never what you want it to be.

And this is one such story. You see, we have an adopted woman who was at first quite curious about her biological mother but no one would tell her about that. I can understand why they didn’t since her mother wanted to have an abortion, but the father stopped her from doing that. So he raised her with love and care from what I can see in the post. Although that changed when she made a decision that he did not agree with, and he ended up ‘retaliating’ with a horrible gift. 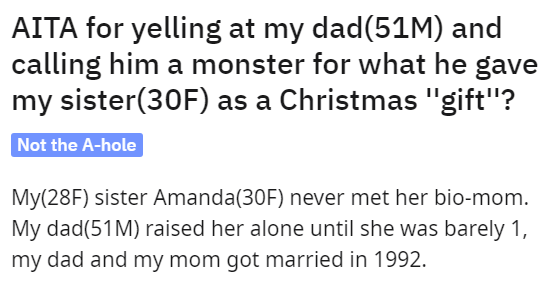 I mean the woman basically sold her child and that can be quite painful to hear. 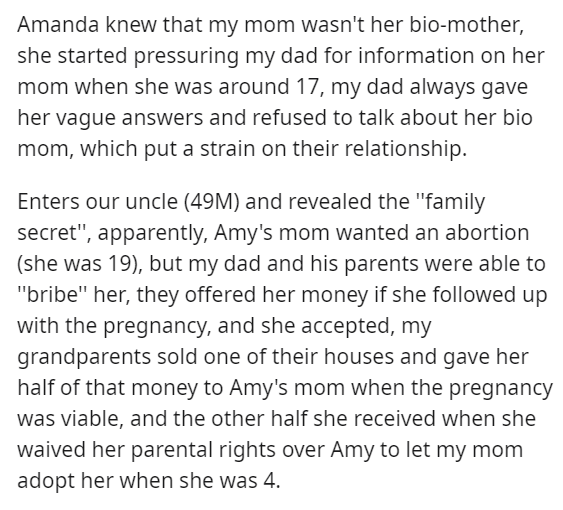 I can understand why someone wouldn’t want a baby, but she did take a lot of money for that.

But this isn’t really the issue of this story. You see she got pregnant. 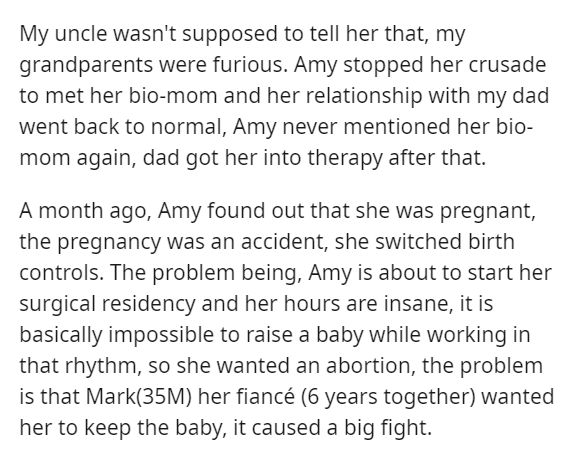 She obviously didn’t want it since she is currently more focused on her career. 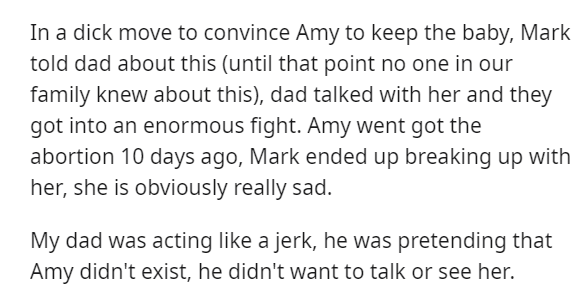 You would think this is where the story would end, but it gets worse.

I can see that the father is upset over the abortion which he doesn’t have the right to be.

Tired of what? Taking care of his daughter? 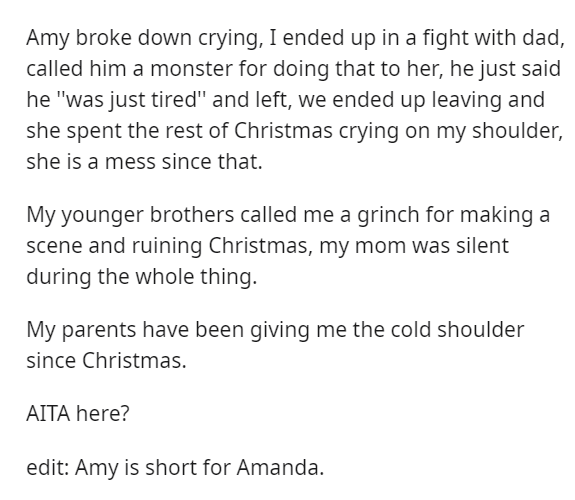 Possibly Amy has things in common with her bio-mum, being a victim of her father’s toxic a** family.

Her mother was a 19-year-old in a relationship, fell pregnant and wanted an abortion, likely to pursue her future. Instead, her boyfriend roped in her parents, pressured her to keep the baby, paid her off but made a requirement that she wouldn’t be compensated unless she signed away her rights, giving up any opportunity for a relationship with her child. And her mother was just barely an adult at that age. That’s manipulative as all hell.

Now your sister, a woman, has had her father sit on the information on who her birth mother is her whole life. He never told her. She had siblings, never told her that either! She is a driven career woman, falls accidentally pregnant, the timing isn’t right, doesn’t want it to impact her career, and what does her boyfriend do? He pulls some manipulative BS just like your dad did, roped in family and tried to shame her out of having an abortion. She went ahead and your dad was just as nasty to her as his parents were to her bio-mother.

And really, I know she’s been raised to think her mother was a monster. She likely thought she was doing the right thing, here is a family that desperately wants the baby she was going to abort, so she gave them that. And she went on to have her own family on her own timeline. A decision not too dissimilar to the rational choice your sister made to have an abortion.

Your father is a monster. How horrible is that, to find out at thirty you have siblings and a mother her knew about the whole time? She should have been put in touch at 18 by the latest. –Willdiealonewithcats

Apparently this is the first time something like this has happened. 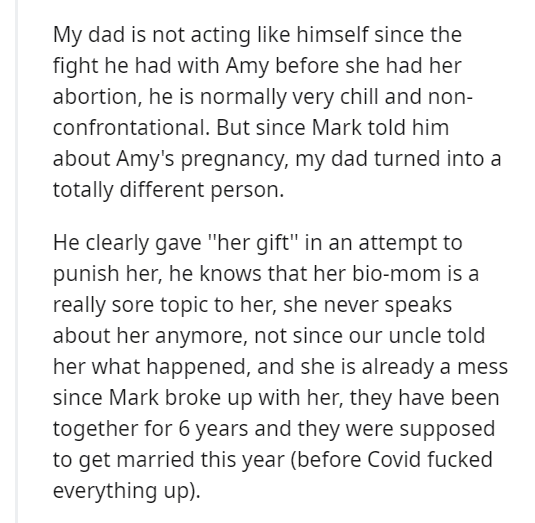 But I am glad there was someone who supported her. 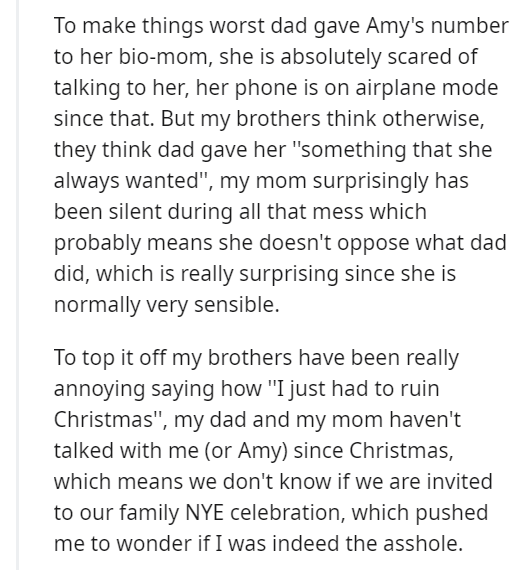 You were actually being a great sister by defending her and standing up to your father. 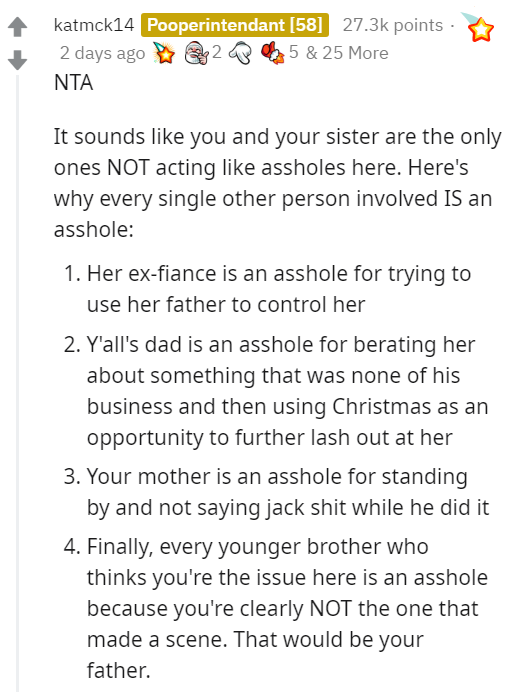 He clearly did not deserve her. 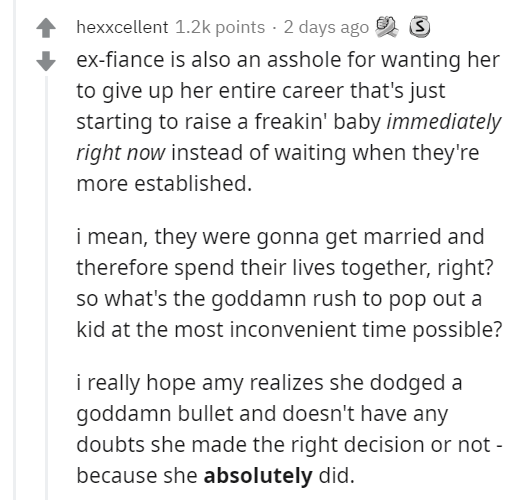 She is focused on her career at this time and that is perfectly okay. 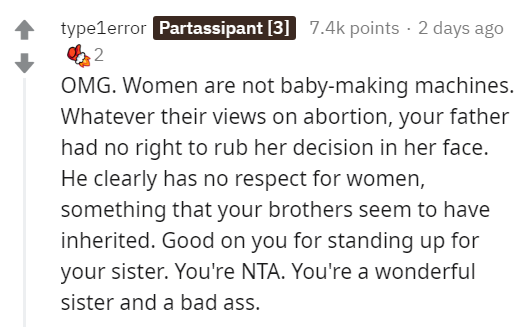 I can’t understand what he is tired of though. 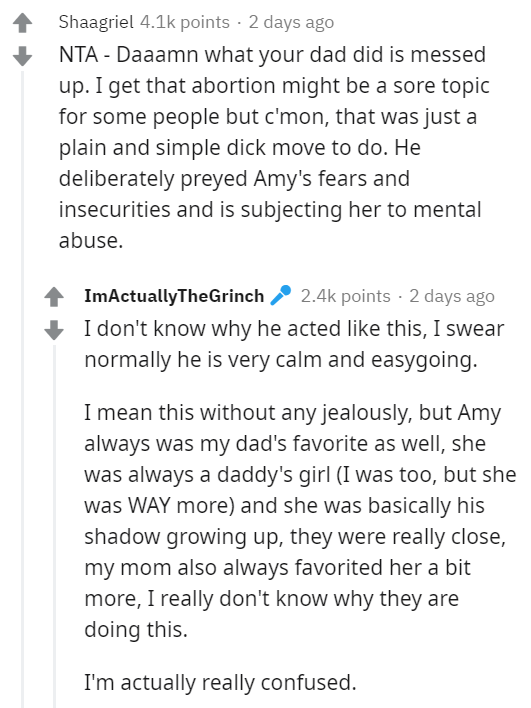 NTA. Honestly if your dad doesn’t want to be called a monster maybe he shouldn’t act like a monster. Good on you for sticking up for your sister and bring the only one in her corner, it seems like. –mercyofnod

What are your thoughts on this situation? Comment down below and let us know.