What is a parent’s obligation?

Is it their obligation to pay for your car? How about an IVF treatment? Many people would say yes to both of them. While others may say it is the child’s own responsibility especially if they are not underage and live alone or are with a partner. After all, how long can we expect our parents to pay for everything we need? As long as they are fair and have used their wealth equally among all the children, it shouldn’t cause any problems. But it does, that is what family drama is after all.

So when this woman wanted to have IVF treatments, she asked her father to pay for them. This statement sounds quite innocuous since it is not a bad thing to ask your parents for help. However, she wanted him to use the car fund he had saved for his step-daughters 18th birthday. And when he refused, she was none too happy with his decision calling him selfish and accusing him of favouring his stepdaughter over his own blood. You can read the whole story by scrolling below.

This particular story starts with the Father explaining the reasoning behind his savings.

He wants to save money for his step-daughter and buy her a car. 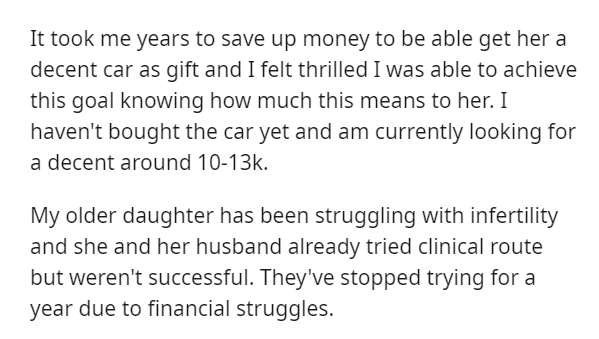 However, that is when things started to get a bit complicated. 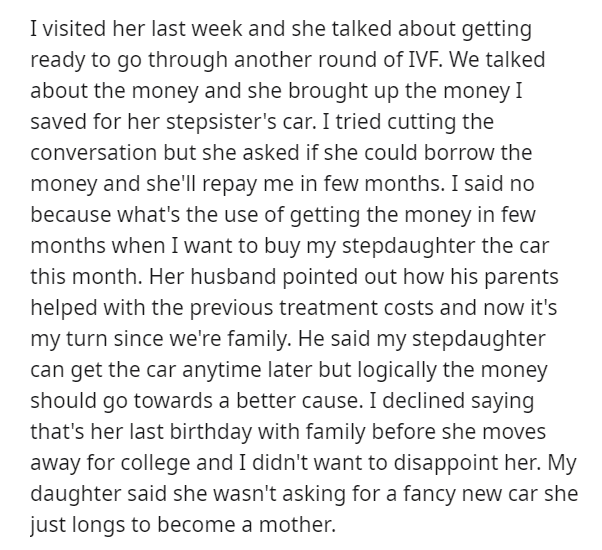 He explained why this wasn’t a good use of his money. 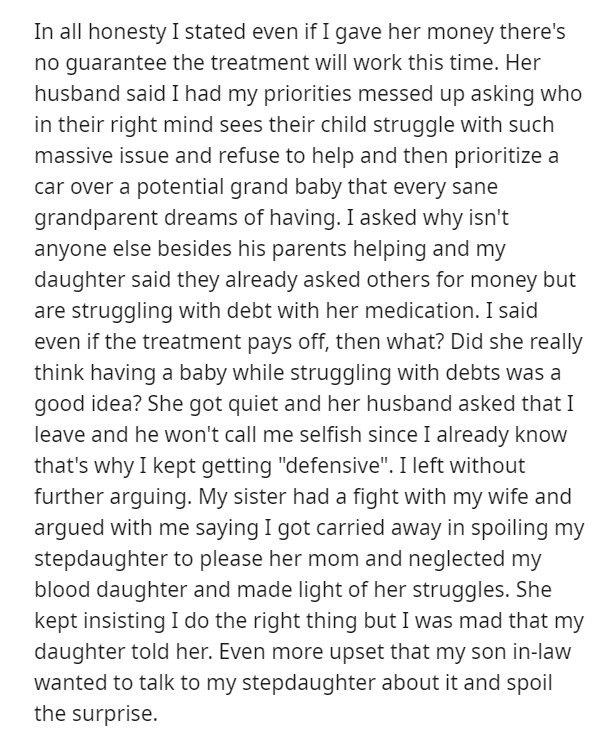 But no one took this too well and accused him of being selfish. 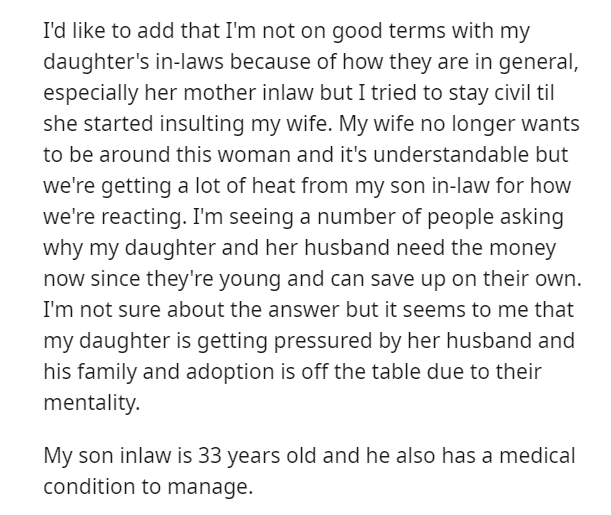 In my personal opinion which should be taken with a grain of salt, no one came out of this looking too well. The Father should not have said the things he did to his daughter. But at the same time, it is his money and he should have to justify his reasons. It is not as if he is wasting his money or anything of that sort. He has no obligation to help her with the IVF. And as cruel as it may sound, taking care of a baby can be very expensive so it is not a good idea to jump into this decision when you are in financial debt. That would not end well for anyone.

People in the comments had varying opinions. 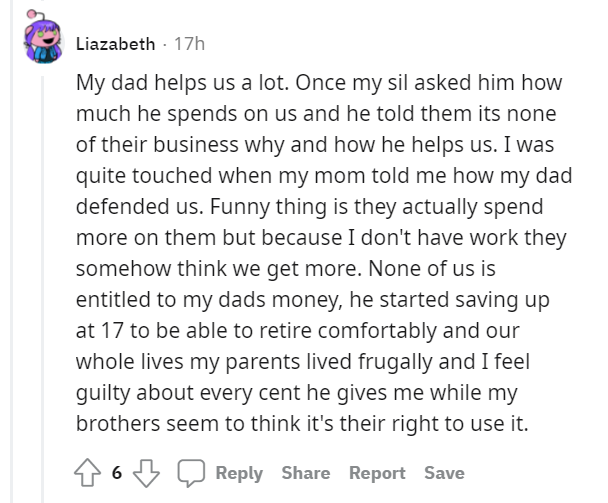 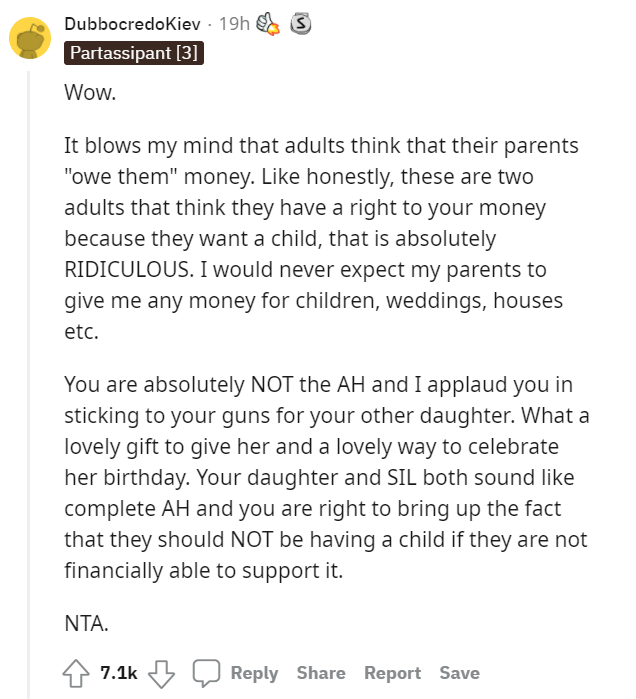 And many Reddit users even said that she could wait until she had the money. 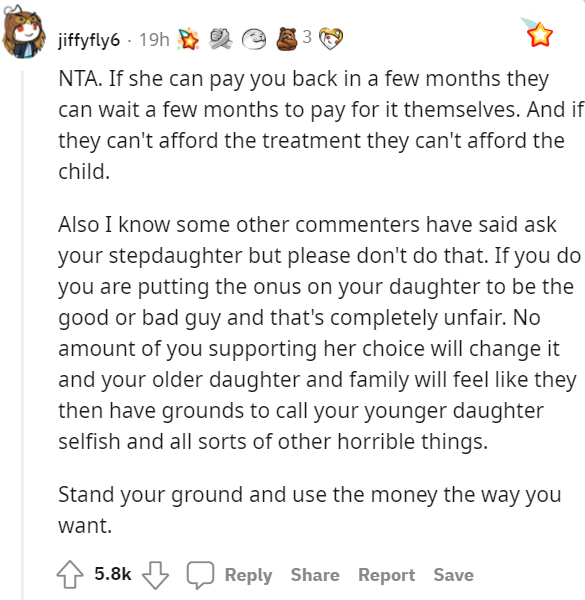 After all, it isn’t as if she can’t wait a few months. 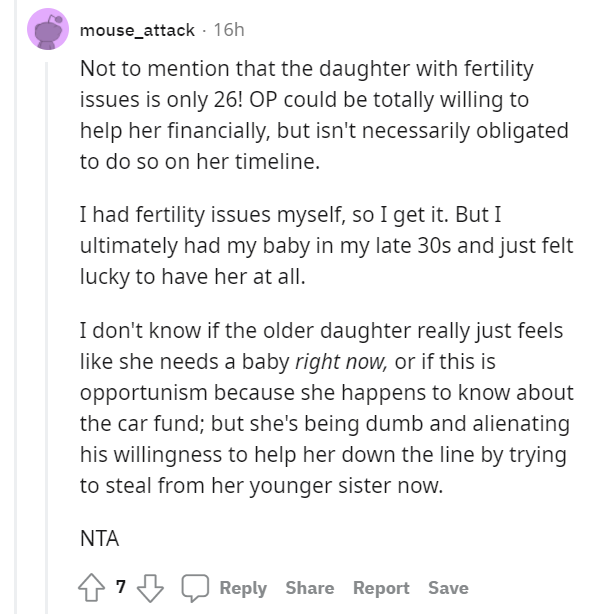 Even I can feel a bit of entitlement coming from the daughter. 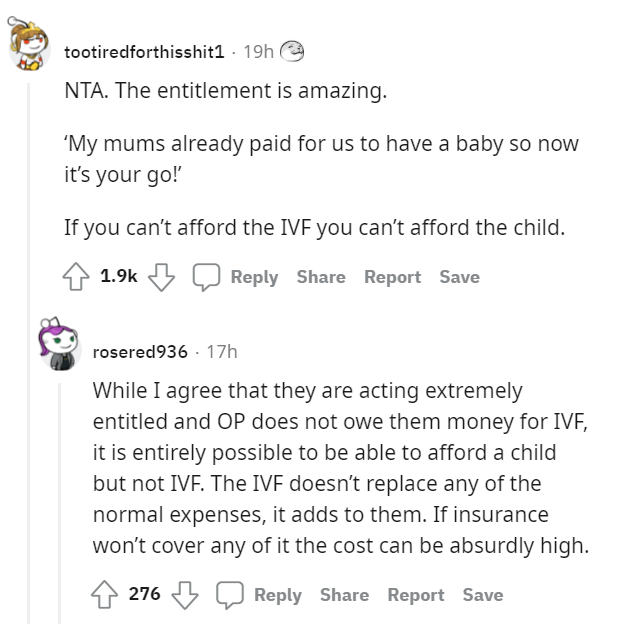 But not everything is so black and white. 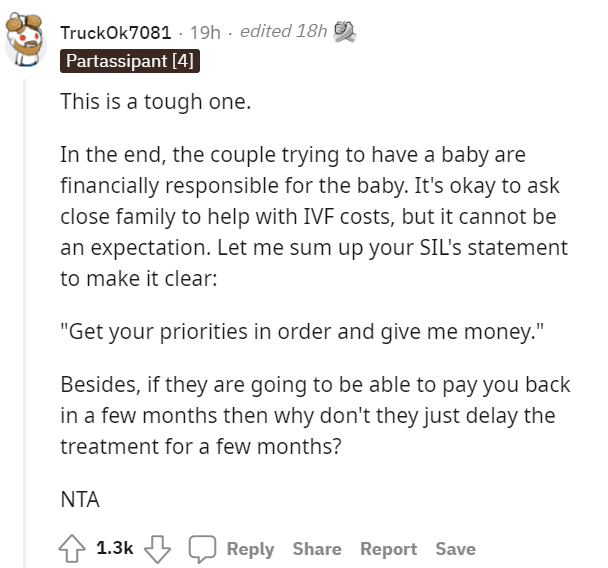 I do think perhaps the daughter and son in law sound entitled and they should not have approached it this way. OP and all the commenters saying ‘if she can’t afford IVF that she can’t afford the baby’ is really quite inaccurate, not to mention cruel. IVF is extremely expensive and they don’t have the money because of the expensive nature, not because they have been reckless. Babies don’t cost as much upfront!

For the repeat comments on ‘she doesn’t need to do this at 26, she can wait’ – it could have been recommended by her doctors that she do this now rather than wait and generally her chances are better at a younger age.

Having a child shouldn’t just be reserved for the wealthy or the lucky who are able to conceive naturally and the cost of IVF is heartbreaking. We don’t ask parents at the hospital if they have the cost of IVF saved up and if they say no, tell them they shouldn’t have had their baby. That’s just mean.

I do think that perhaps there was a compromise to be made here and that stepdaughter could have received a less expensive car and some of the money could have gone to eldest daughter?

To be honest, though, it doesn’t sound like OP wants to help daughter at all, regardless of how daughter might have asked. –sskk13

While others wanted a bit more information. 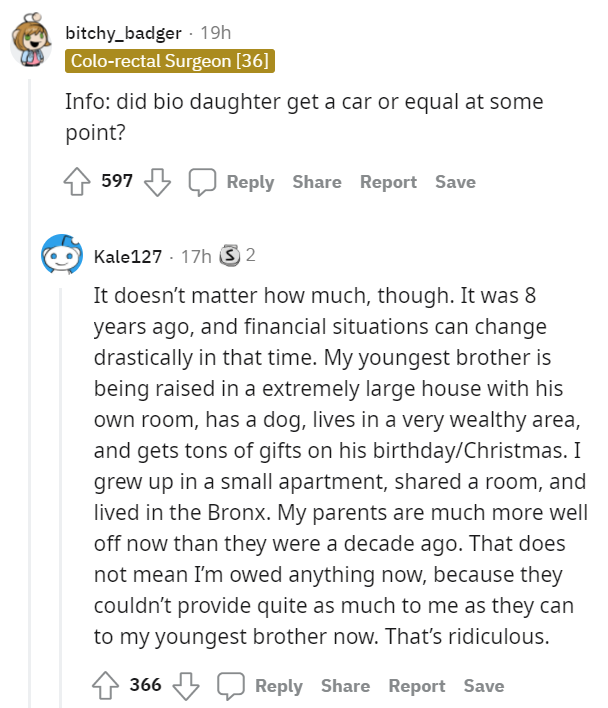 After all, it might be that she is feeling neglected. 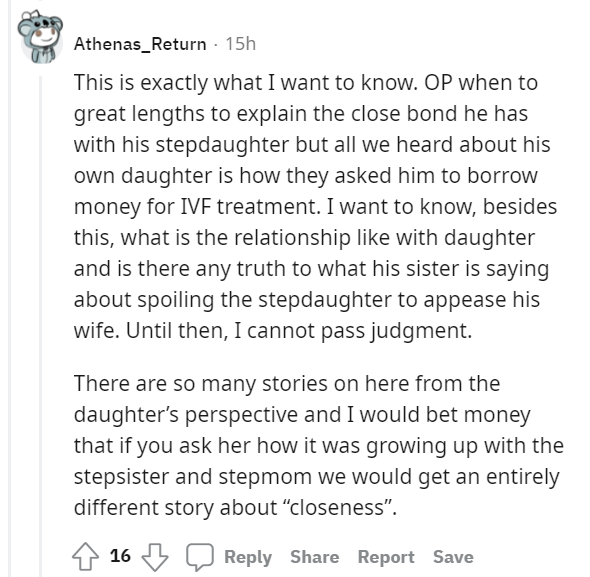 But there were even some who thought no one was in the right in this particular scenario. 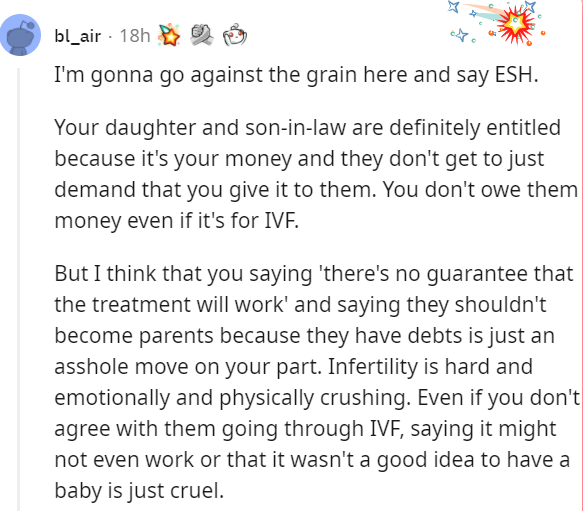 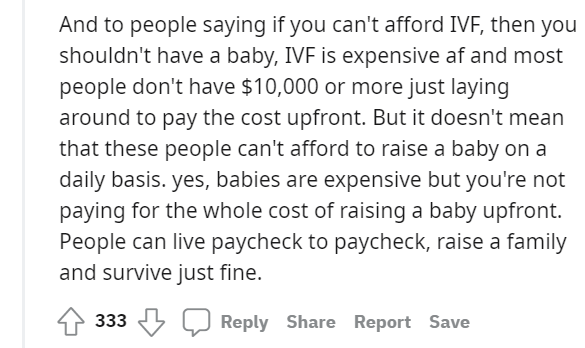 Who do you think is in the right here? Is it the daughter for acting entitled? Or the Father for being quite harsh towards her when it comes to IVF? Comment down below and let us know. Don’t forget to share so other people can join in with their opinion as well.