A wedding is an important day.

A wedding is a once-in-a-lifetime opportunity for many and most of us want that day to be extra special. So understand why most people go a bit haywire because of all the stress and pressure. However, that does not give anyone the right to act like an a**hole. Just because you are the bride, does not mean that everything will be handed to you on a golden platter. It might be a once-in-a-lifetime day but it is still only a wedding and it should be about the person you’re marrying rather than all the frivolous things.

Now, there is nothing wrong with going big on your wedding day but not everyone has the financial freedom to spend thousands of dollars on a wedding day and it is only one day, isn’t the fact that you get to marry the love of your life more important? And even if you want to have a special wedding, it should be on your dime and you shouldn’t expect everyone else to pay for your special day. However, that is exactly what so many Bridezillas out there do.

You can scroll below to see what I am talking about.

This story starts off with a wedding day rapidly approaching. 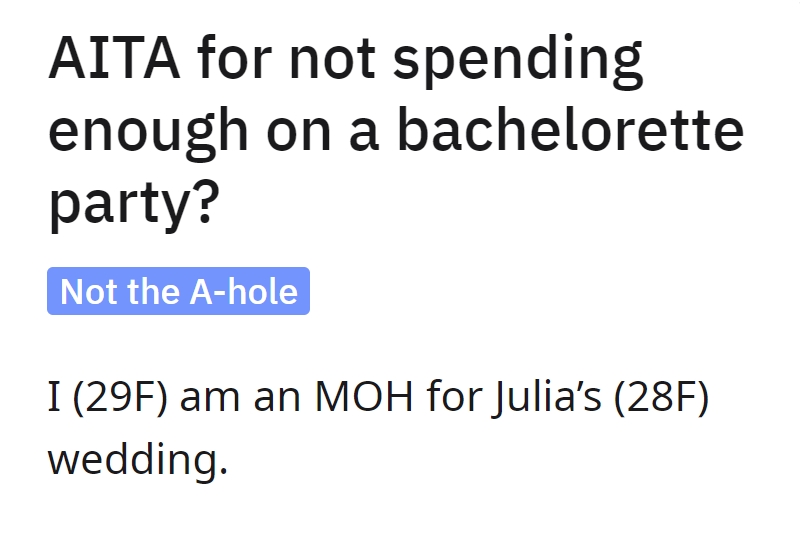 It is Julia’s wedding and she has always been a bit selfish according to her friend. 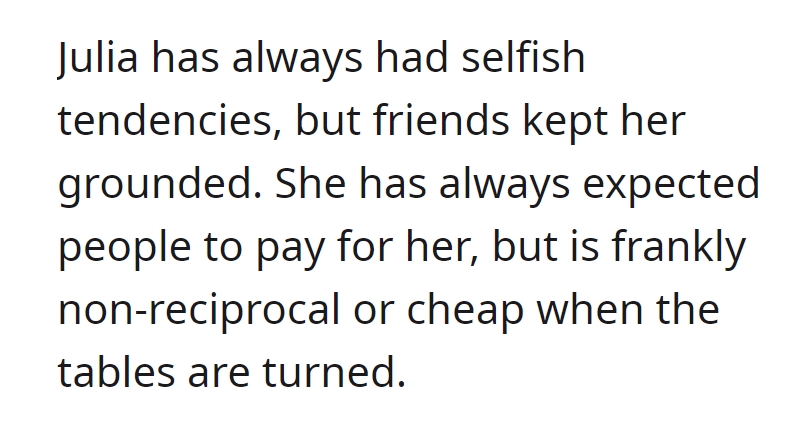 She is clearly used to the expensive lifestyle and her husband is not helping with that. 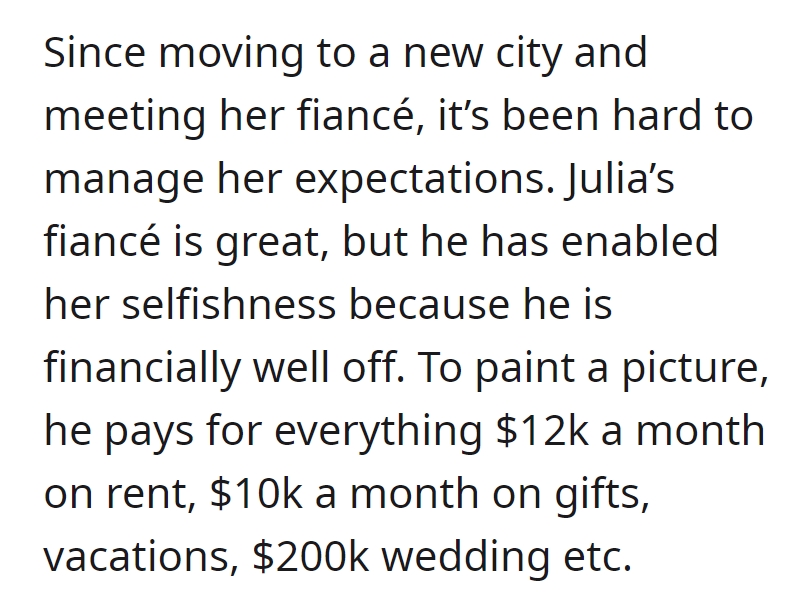 They are having a destination wedding and those could be pretty expensive.

People assumed that it would be under a thousand which is still a lot. 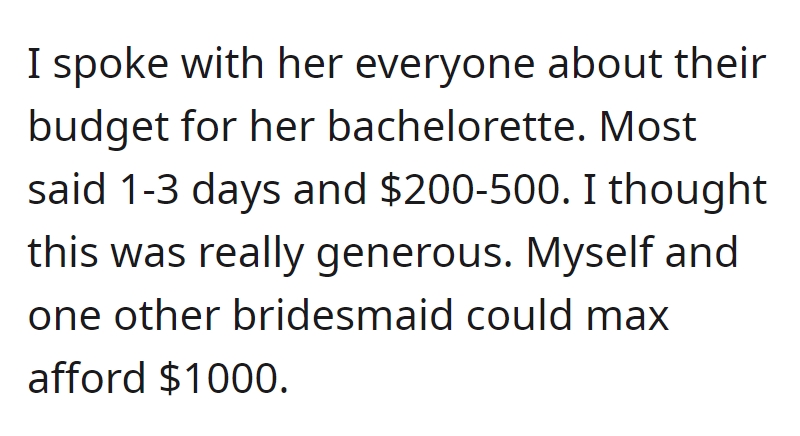 However, as it turns out Julia is expecting a lot more than her friends initially thought. 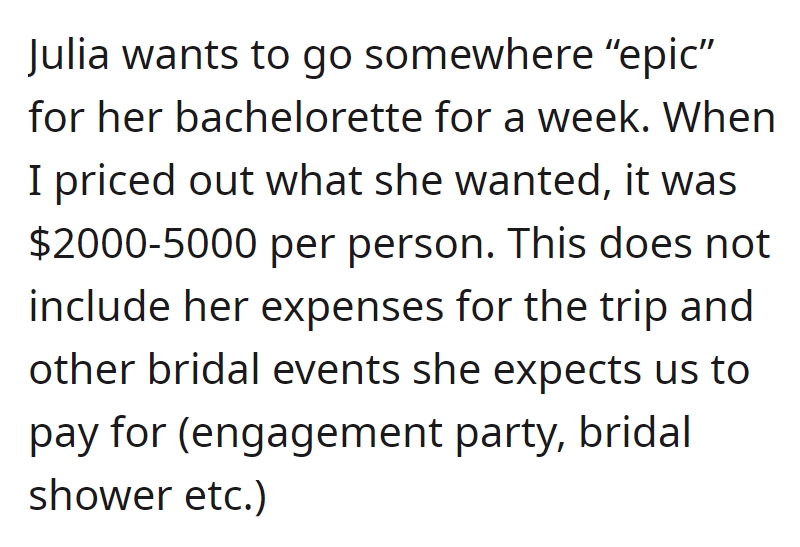 The poster of this tory explained to Julia that this was too much.

But Julia was having none of it and called her out for being selfish.

Julia was basically being an all-around a**hole. 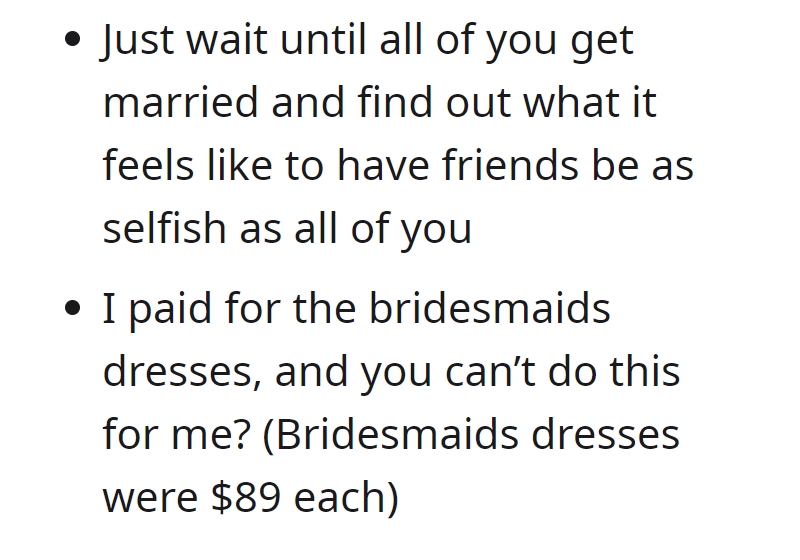 The poster tried to give adequate reasoning but Julia is clearly too entitled to understand. 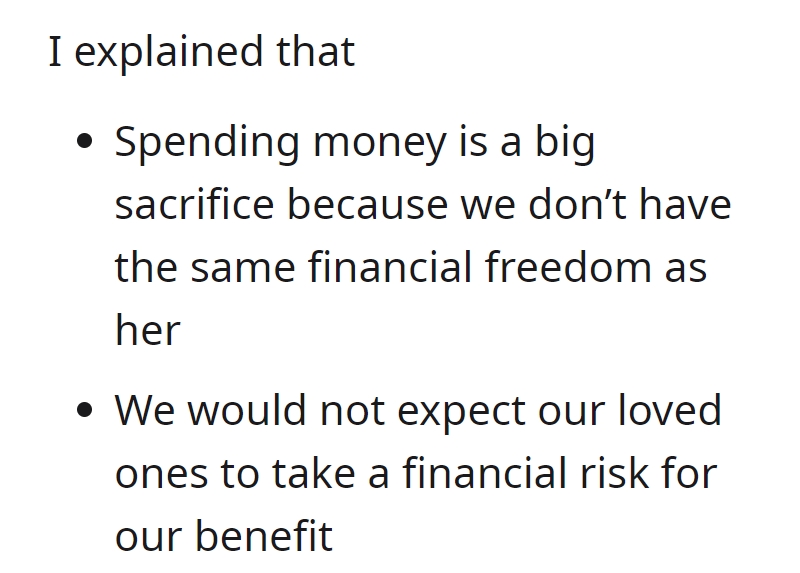 Julia is just a spiteful person from the looks of it. 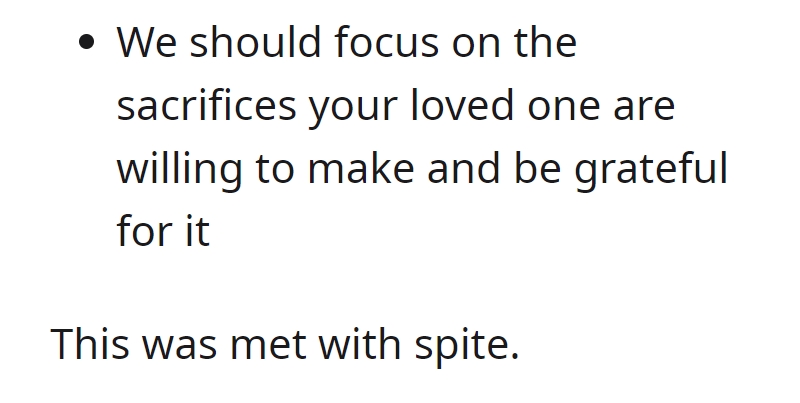 Did this woman really think it was okay to ask her friends to spend that much money on her wedding day? I understand that being friends is all about helping each other but this is not helping and this greedy woman is just taking advantage of her friends. Even if her friend is well-off, that still doesn’t mean that she should be entitled enough to think that she deserves her friend’s hard-earned money. All I can say is that this woman is a choosing beggar and nothing else.

Julia also has her eye on her friend’s money. 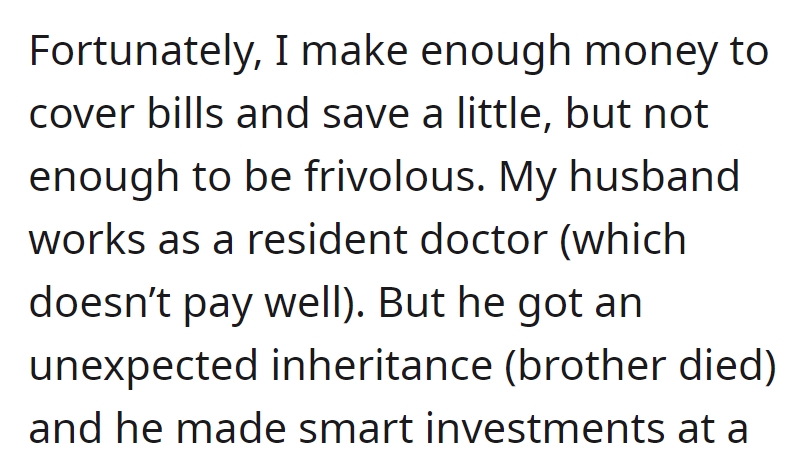 Now other people are piling on her and calling her cheap which is completely false.

This is just plain horrendous behavior. 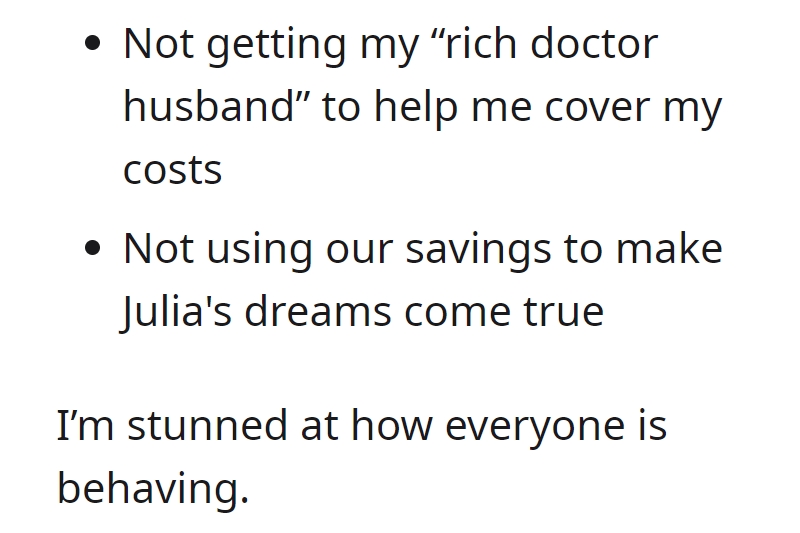 The poster just isn’t a big spender and that is perfectly okay. 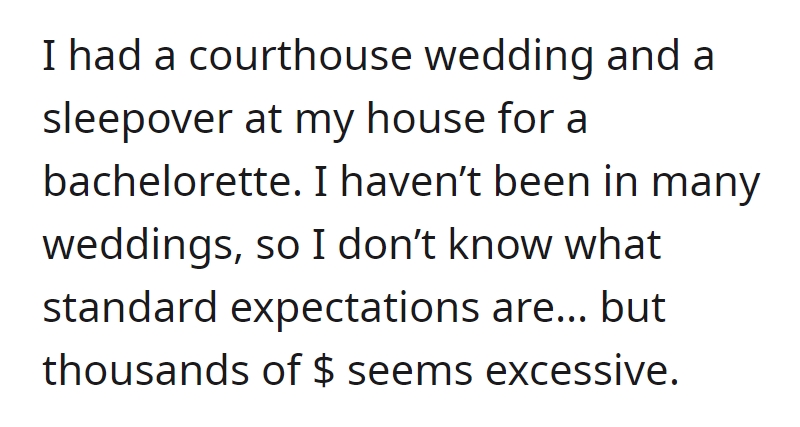 However, she still wanted another opinion so she asked the Reddit users. 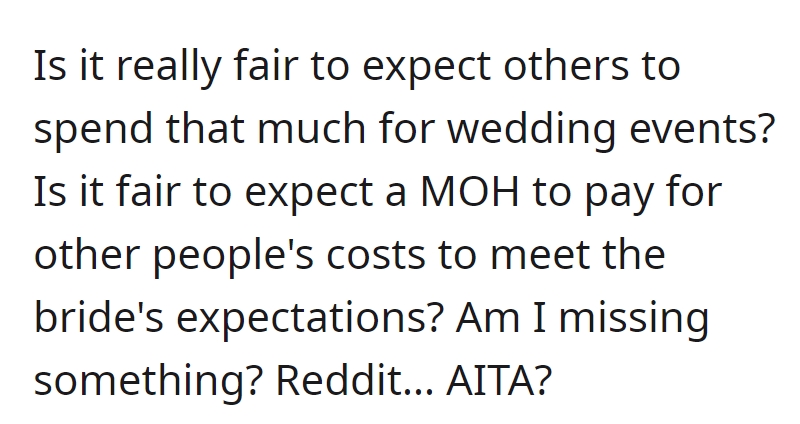 We also get a summary of the story for those who didn’t want to read the full story.

On top of that, the wedding is happening after only three months. 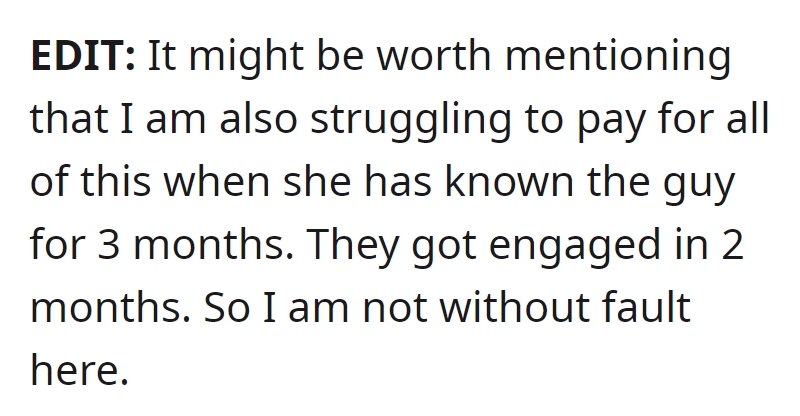 As you can imagine, everyone called the Bride out for being the a**hole in this situation. 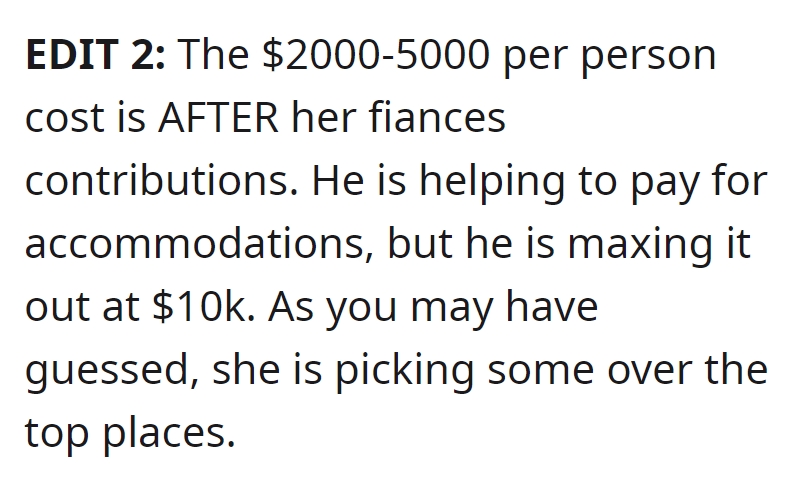 What would you do in this situation? Would you pay for the party or would you simply break off the friendship with this Bridezilla? Do you think it is okay to expect this much from your friends or is this woman acting like an entitled person? Comment down below and let us know.