We have all walked in on someone.

And when I say walked in, I do mean entering a room without knocking and realizing they were either showering or changing their clothes. You can deny it but we have all either done it or it has happened to us. To be fair, parents are the ones who do it the most when they’re trying to catch their kids doing something unsavory but usually find their kids basically playing games. Now, I understand that parents think they need to be responsible but everyone deserves a little bit of privacy.

Now, this may or may not be true for Asian parents because if there is one thing I know about them then it is that they don’t usually think that their kids deserve privacy before they move out. People might have different takes on this but that is not what we are here to talk about today. What we are going to talk about is a story shared by a young woman about how her mother started calling her names after her father walked in on her showering.

You can read the whole story by scrolling below. And trust me, this is a weird one.

We start this story off with some information about the overall relationship between the parents and the woman who posted this. 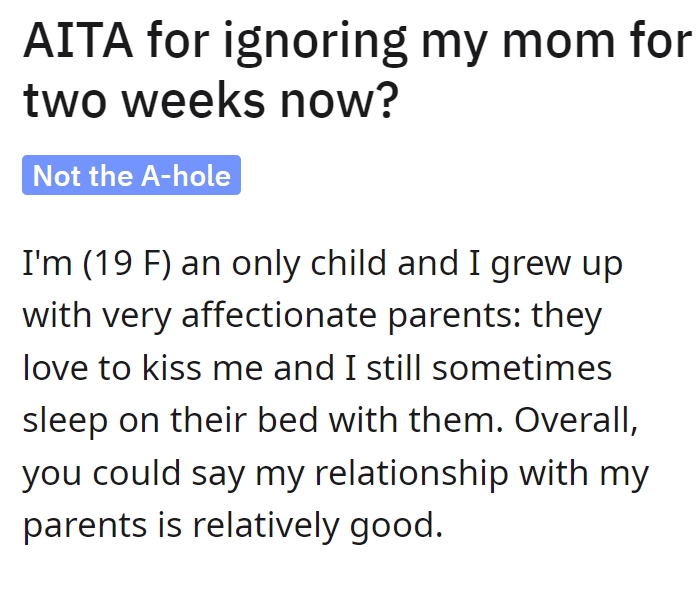 We also come to understand that this is not a huge house that they live and they all have to share a bathroom.

This kind of thing may sound weird but people from all around the world live in different cultures so this is pretty normal to me. 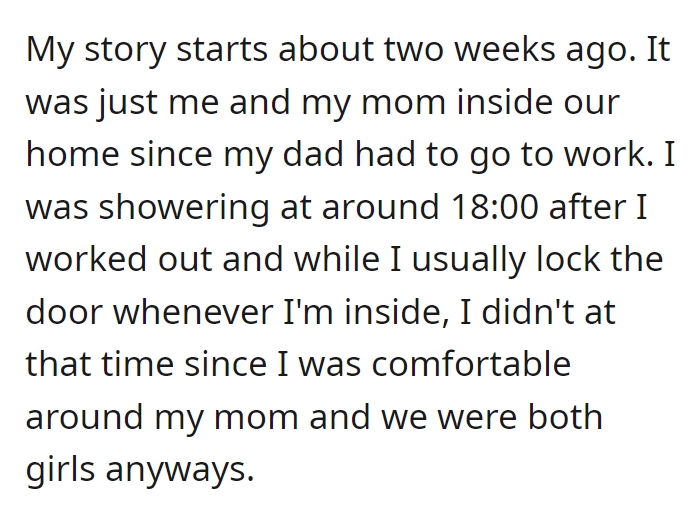 Now, she had soap on her face so she couldn’t see who had opened the door but she assumed that it was her mother. 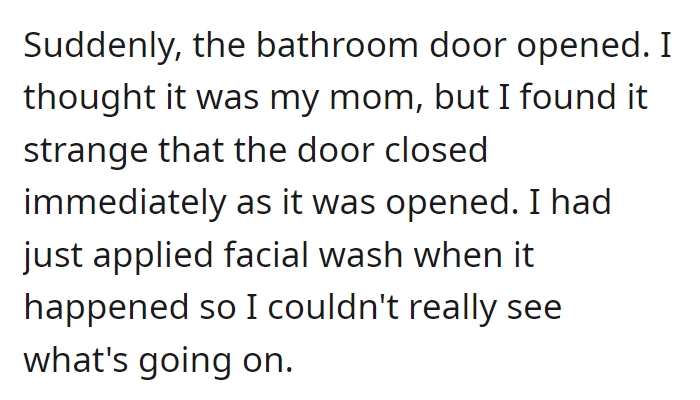 But that is when things took a weird turn and her mother started calling her disgusting names even though it was just an accident on her father’s part. 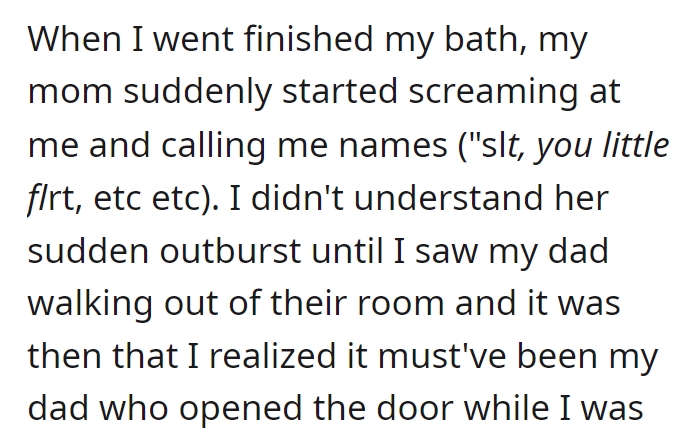 It wasn’t as if she had done it deliberately and she didn’t even know her father would be home so this is just plain disgusting.

So it is not surprising that the girl decided to ignore her mother after this. 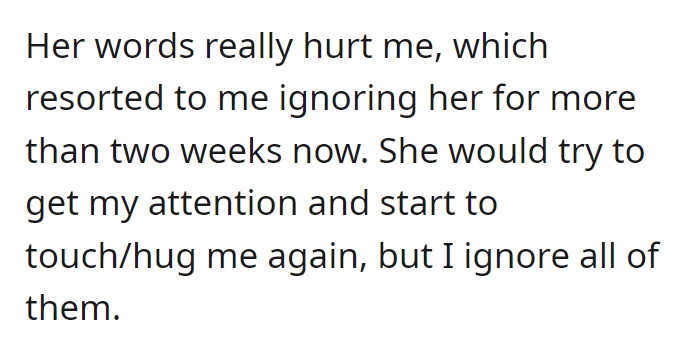 Her mother has clearly tried to patch things up but she is not having any of it and I understand her side completely. 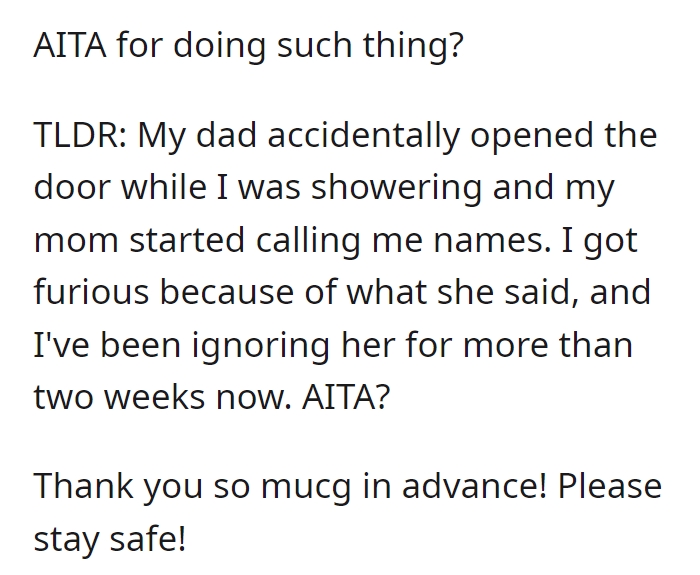 She also goes on to explain some things that might have seemed weird to some people. 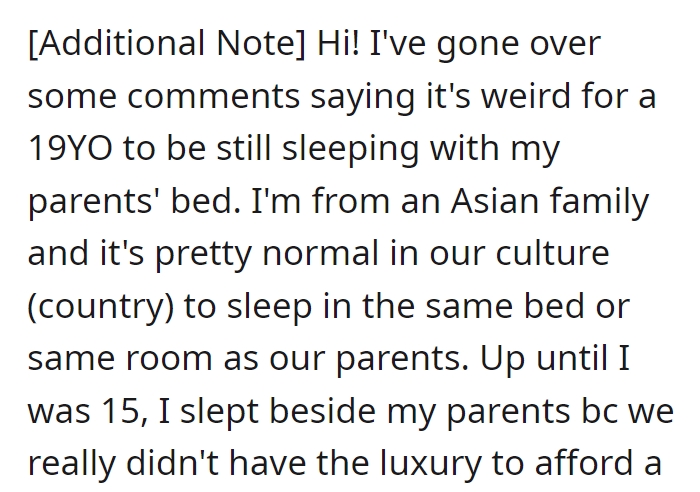 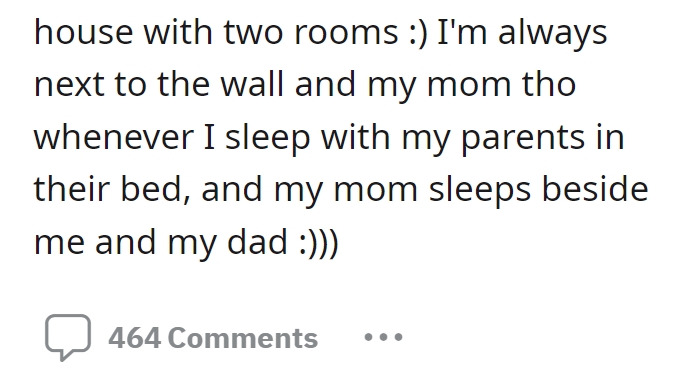 Honestly, it is already embarrassing seeing as her dad walked in on her. I mean, if this was me, I’d just want to disappear into a puddle. Because belive it or not, I understand not locking the bathroom door when you know that only your mom is in the house because I used to do the same thing since I was comfortable around my mother as well. But what her mother said is not only just rude but also quite disgusting. I mean, it is embarrassing but what kind of a father does she think her husband is? I don’t even want to think about what this woman was insinuating.

People in the comments were 100% on her side as well as they should be. 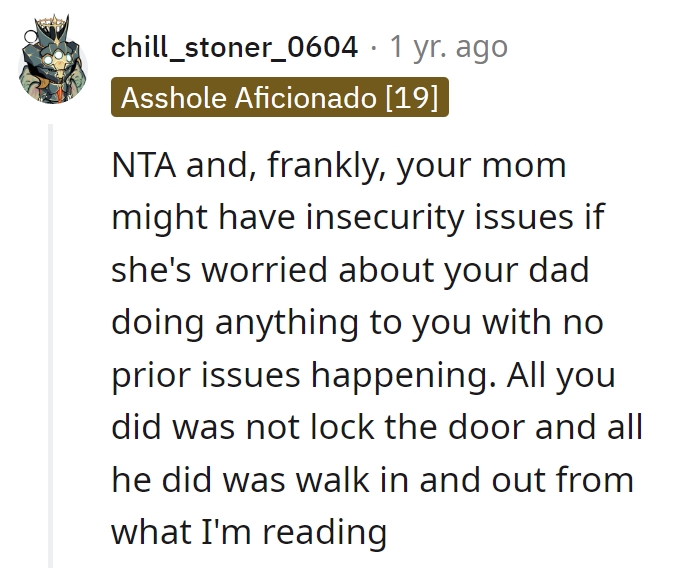 That is my thinking as well! What kind of father does her mother think her husband is? 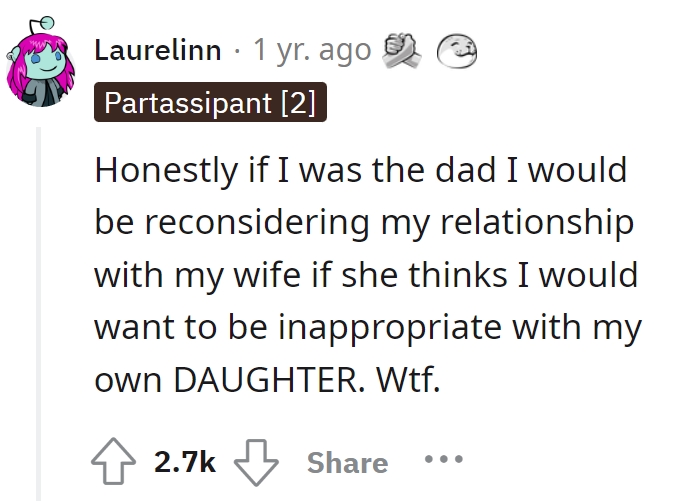 What are your thoughts on this story? Were you just as weirded out by the mother thinking as I am? or do you think the woman just kind of said those things without actually thinking about it clearly? Comment down below and let us know. Also, don’t forget to share this story with your friends so they can join in the discussion as well.