Christmas is a time to be with Family.

At least that is what I have heard. You maybe surprised to hear this, but I have never actually celebrated Christmas myself. But from all the research (watching Christmas films) I have learned that it is about being selfless and appreciating what you have not what you don’t have. However, it seems some families don’t understand this concept. Now, Don’t get me wrong, I don’t think blood is what makes you a family.

Quite the opposite, just because someone is related to you by blood does not mean they will always want the best for you. As apparent by the many stories Reddit users share each and every day. And that is why we have another story about family problems with just a bit of comedy thrown in. I mean I don’t mean to be insensitive but this sister is really taking the cake for what she can realistically ‘expect’ from family.

You can scroll on below and take a look or yourself.

I never understood why everyone throws around the word family like it is supposed to mean something. 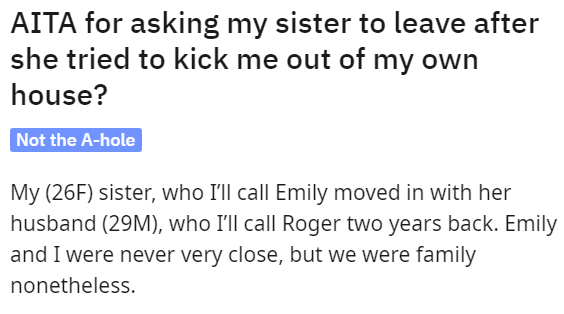 This family clearly only talks to each other when they want or need something.

Who kicks someone out of their own house? Is she serious? 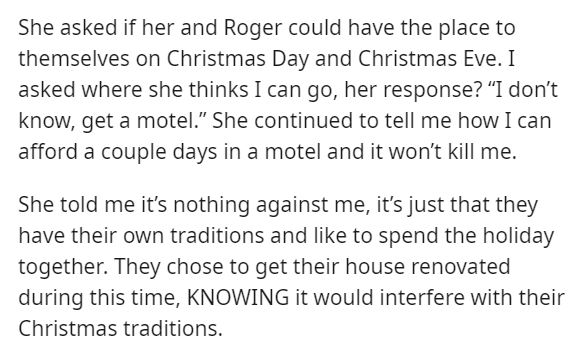 Exactly. They sound like entitled brats—how presumptuous to need a place to stay after choosing the timeframe for a renovation and then asking you to leave when you’ve been more than gracious even allowing them to stay…especially when you aren’t close, and they probably should’ve asked your parents to begin with.

To then expect time to themselves in a place that isn’t their own when they are experiencing the consequences of their decision is beyond my understanding.

I don’t think anyone would be willing to do that on Christmas no less. 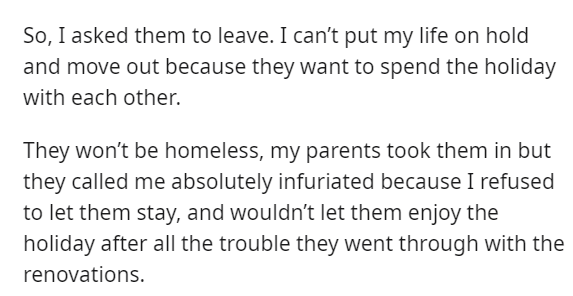 Family can make us feel guilty about anything if they put their mind to it.

I can obviously see who is the favourite child of the bunch. 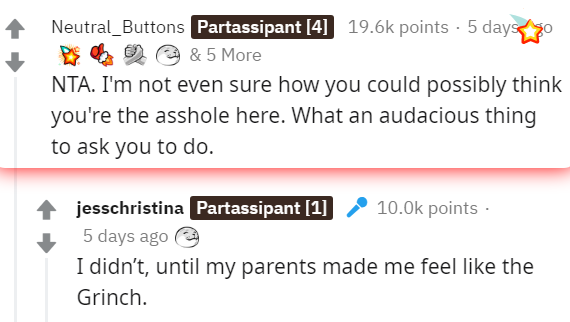 That is one Christmas tradition I can get behind. 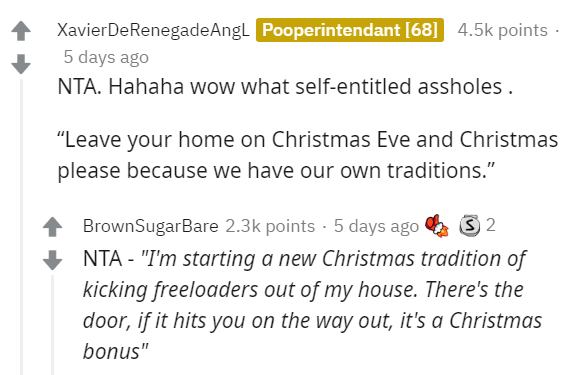 I don’t ever want to judge anyone but this does seem probable. 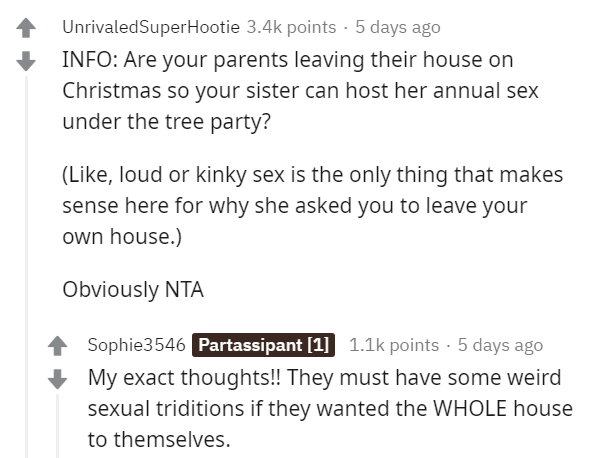 I would like to know if the parents accepted that ‘request’. 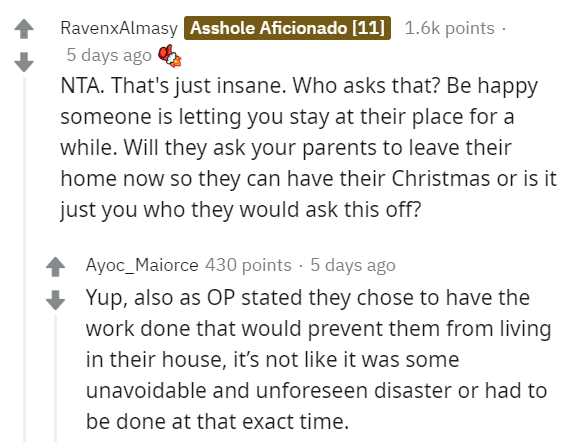 But that would be the sensible thing to do right? 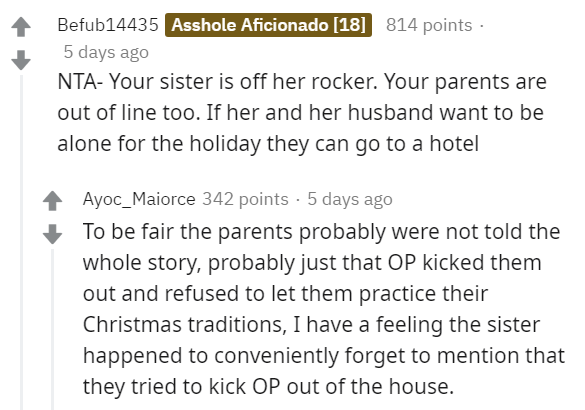 NTA. She knew exactly what she was doing and just expected you to bend to her whims because that’s just her viewpoint. If they didn’t want to have a disrupted Christmas they shouldn’t have chosen to renovate during this period. They don’t get to ask you to leave your house full stop. –Dangerfyeld

However, we can’t know if the sister has asked that since apparently the family has cut contact with their daughter.

Some people just want to take until there is nothing left. 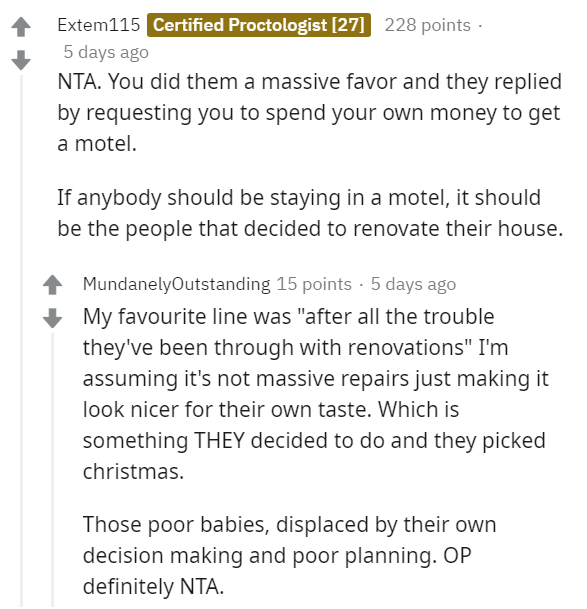 I just seems like they want an excuse to hate her. 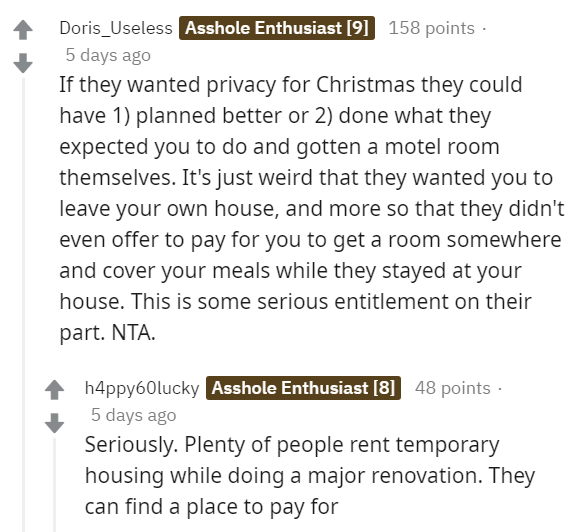 NTA. I’m getting a sense of why you haven’t spoken to your sister in a while. Your parents are ridiculous, too. You’re the scapegoat in this toxic family dysfunction. I hope you have a great Christmas in your own damn home. The hide from some people. –DesignedPax

What are your thoughts on this story? Comment down below and let us know.