Some people think they can get away with anything.

And think that rules don’t apply to them. They think they are entitled to everything even if they act horribly towards everyone. The sister-in-law might fall into this category. You see, the poster of this story made a deal with her sister-in-law that she would watch her kids for three days of the week if did the same for her. However, things escalated to a breaking point when both of them had an argument.

Right after the argument, the OP decided to leave her kids with her sister-in-law as is tradition for them by now. But rather than separating two issues, the sister-in-law decided to call the police on her after giving her only an hour to get back. She was clearly being vindictive but after doing all of this, she still thought, she could get away with having the same set-up as before. You can read the whole story by scrolling below and taking a look for yourself.

They have obviously been doing this for a long time and this was like any other day. 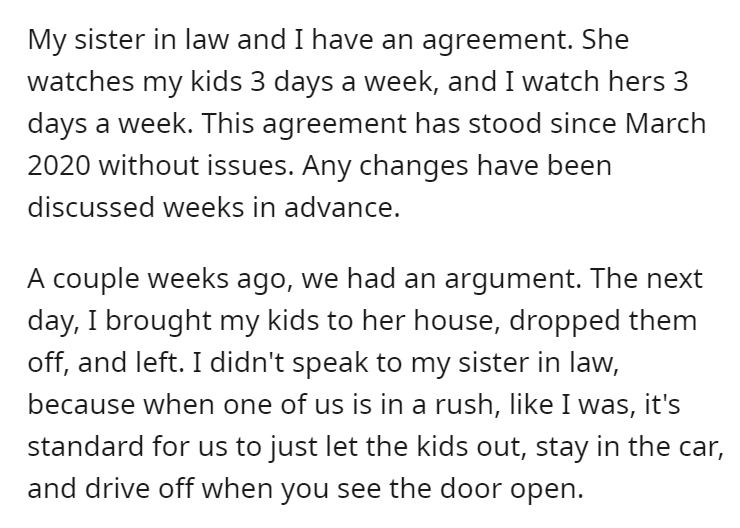 However, things soon changed when the sister-in-law decided to threaten her. 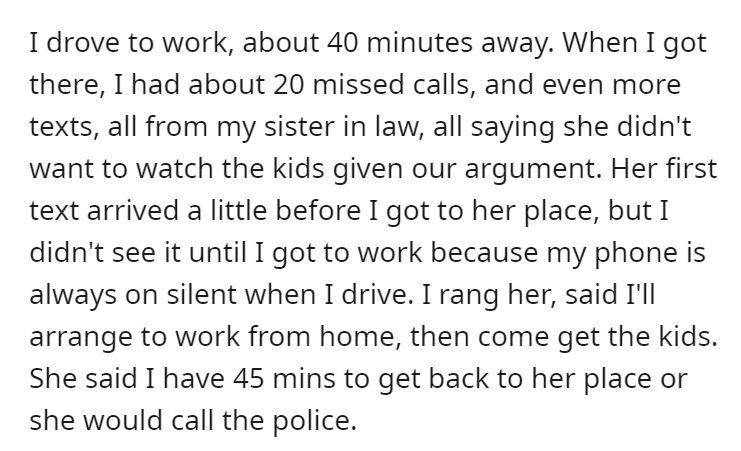 She knew what she was doing as the drive to her work was 45 minutes but she didn’t give her a reasonable amount of time. 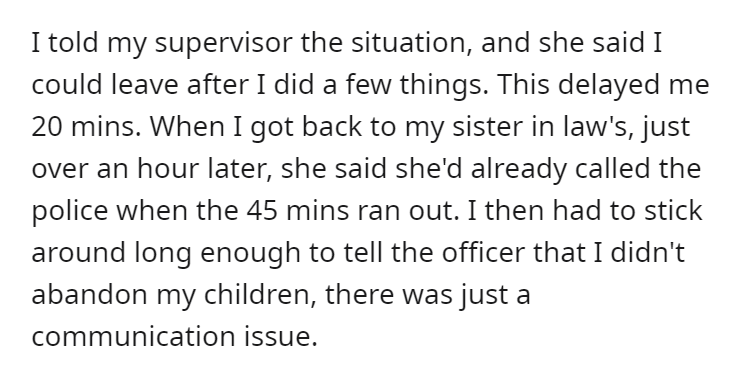 Thankfully, the police were understanding and the issue didn’t get escalated.

But it could have been a disaster and the sister-in-law didn’t think about any of the consequences. 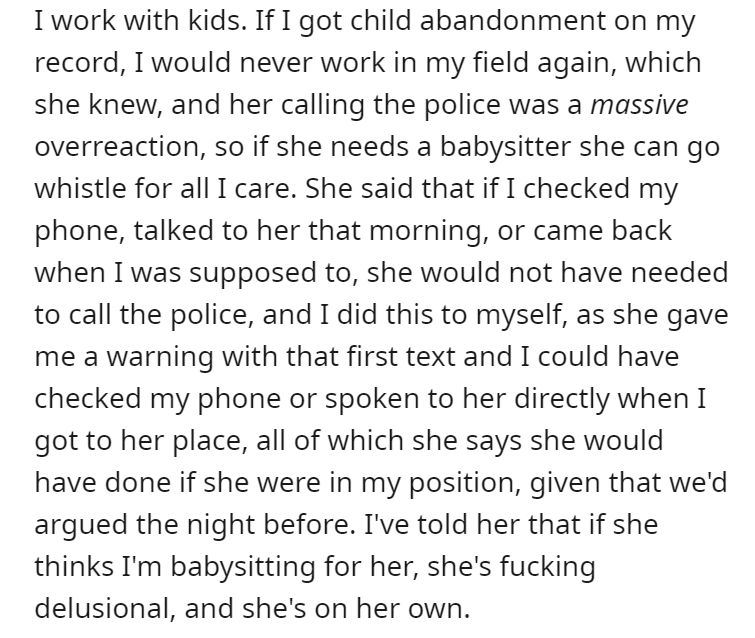 However, she still thinks she is entitled to childcare after the stunt she pulled. 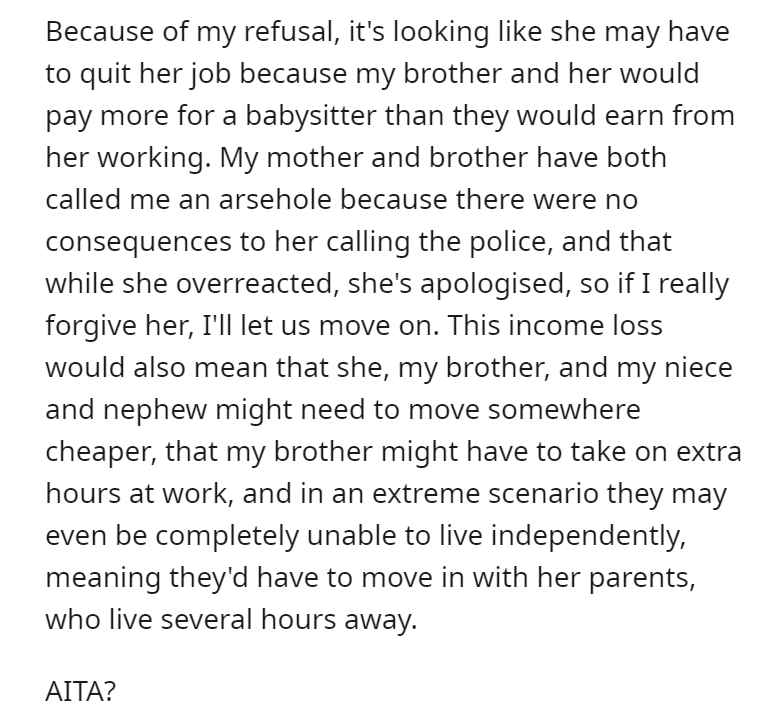 From what I can see, her apology is clearly not sincere.

NTA. The only delusional person here is SIL. Who calls the police on an essential worker out of spite? Let her struggle to find childcare or lose her job. You could have easily lost yours. –Unit-Healthy

And people had the same reservations and told her to be wary of her sister-in-law. 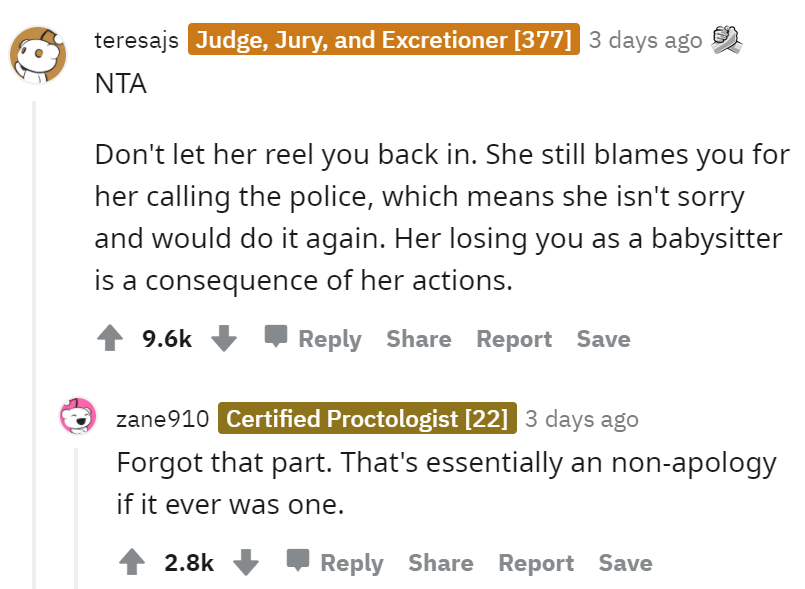 It could have cost OP her job but nobody is seeing that. 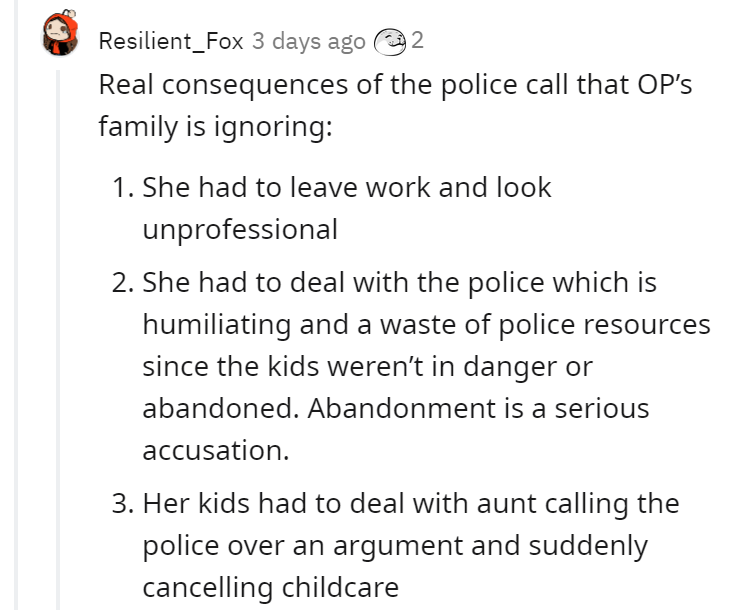 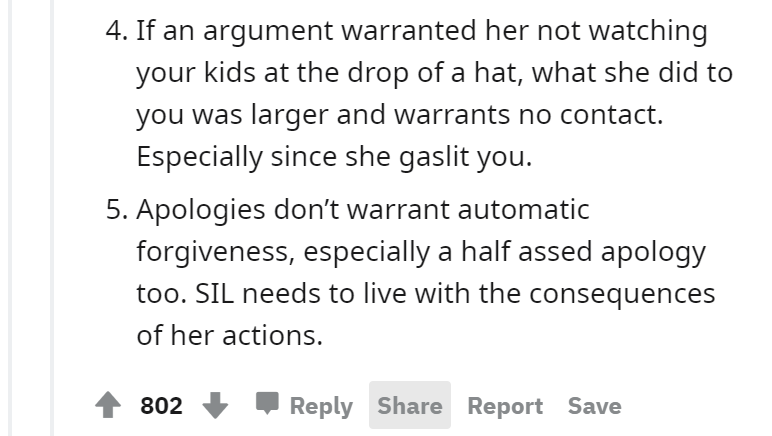 She should have known this would happen. 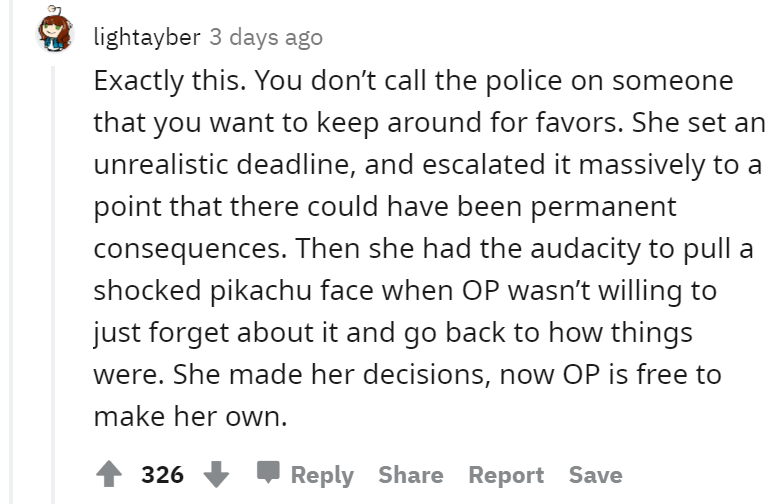 Either she is really dumb or she thought she could get away with it. 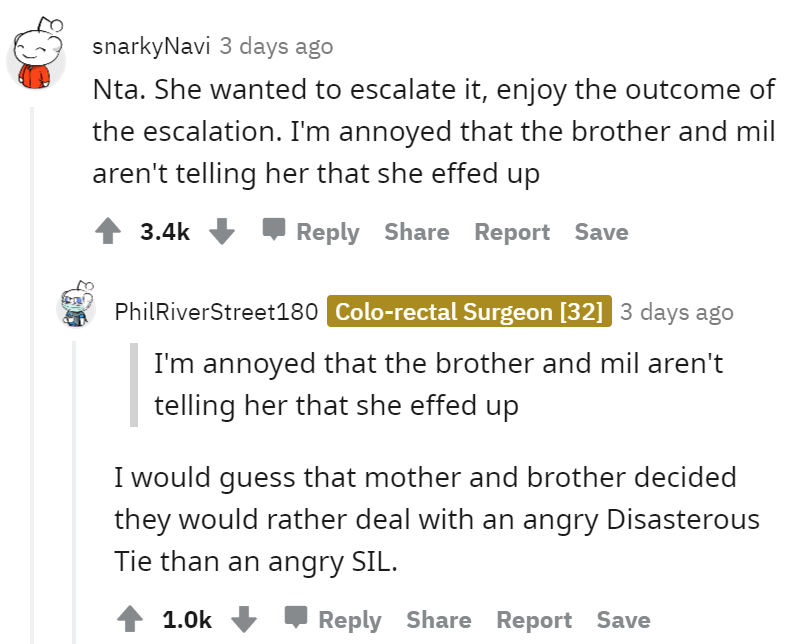 This will continue to get worse. 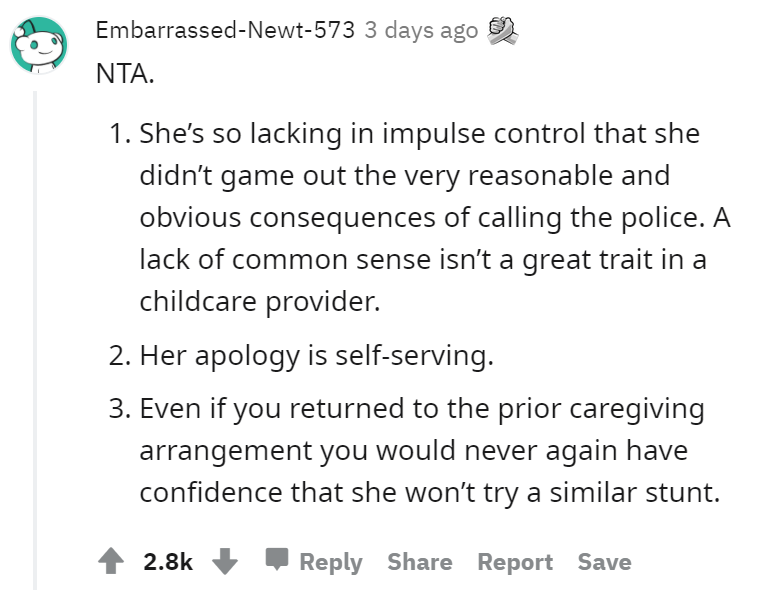 And she is an adult so she doesn’t deserve sympathy for her poor impulse control. 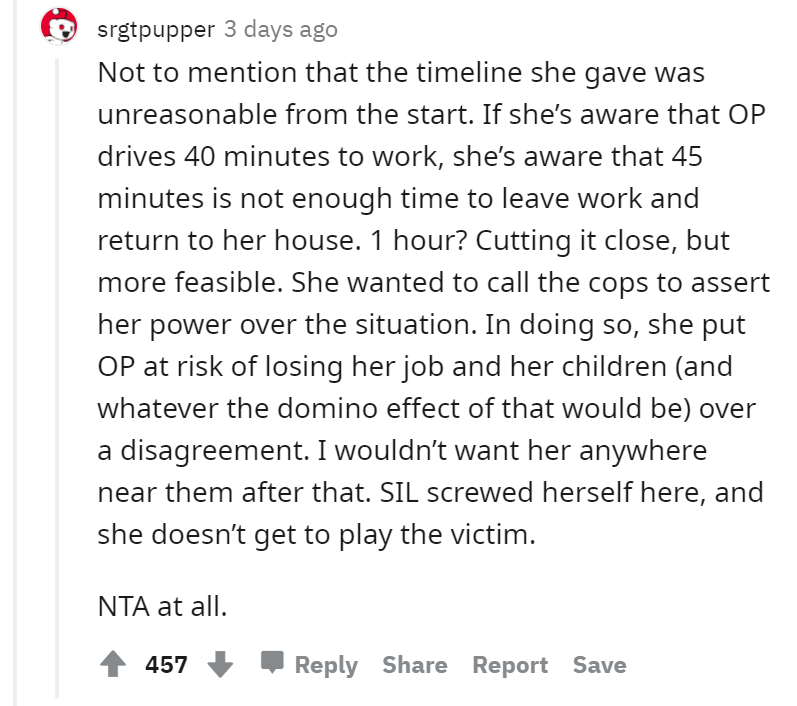 Seriously though! I would literally have blocked everyone’s numbers and that would be it. This could have cost OP her job which in turn would have the same consequences that SIL could now face. To make matters worse though by calling the police OP could have also lost her entire career path as well as custody of her kids. It may be temporarily because OP is not an ab*ser like the SIL claimed when she said the kids were abandoned.

This all would have been and is bad for the kids as well. I would never want to go back to the aunt’s house if I were the kids. Being told you refuse to watch me and would rather send me off with the police and ruin my life because you’re mad at my mom? No, I would never go back. –BornFrustrated97

She called the police on her family over something so insignificant! 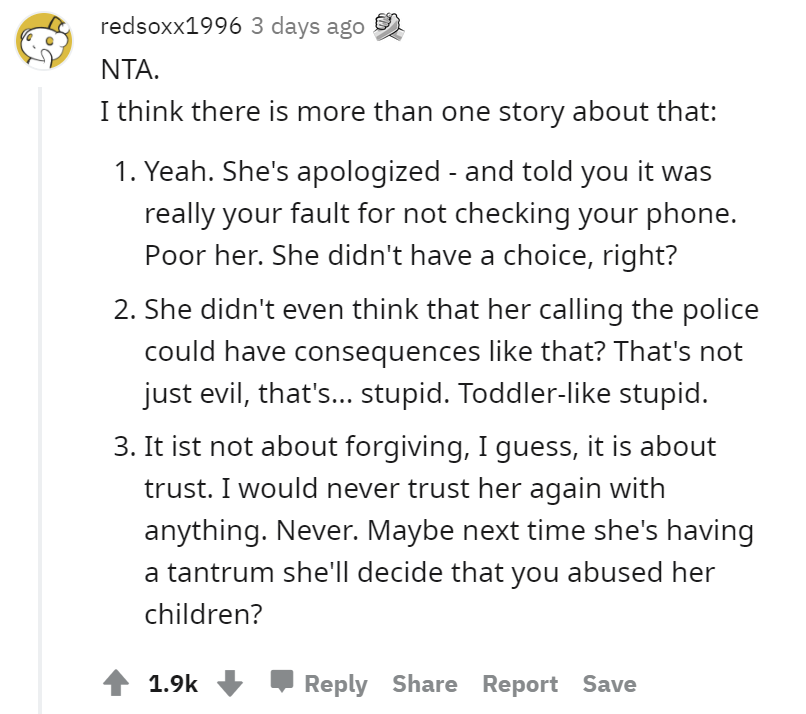 What are your thoughts on this? Do you think OP should continue with their arrangement or cut off all contact at once? Comment down below and let us know.