Marriage is all about working as a team.

Especially when it comes to finances. If both of the individuals work, then they need to split everything in a way that makes sense for them. And while there should still be some sort of individuality even in a marriage, that doesn’t mean you can do whatever you want. I mean it makes sense to spend on things you want with your own money but it is always a good decision to talk about the big investments beforehand.

However, this husband doesn’t seem to get that. As he loves to spend his money in whichever way it pleases him. And while that is fine since he is spending his own money. He didn’t stop even after they started a joint account and the money in the account was from both of them. He seemed to think it was technically all his since it was in his own account and continued to do whatever he wanted to.

It might not have been a good idea to join your accounts when she knew about his spending habits. 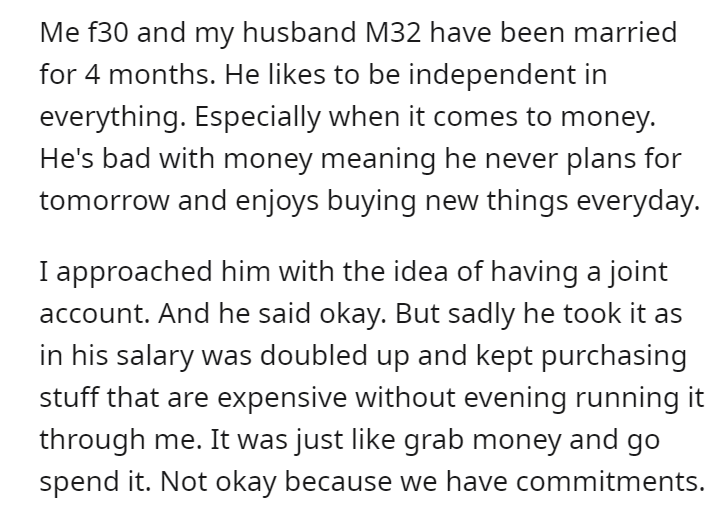 He is not wrong on that front but compromise is needed to make a marriage work. 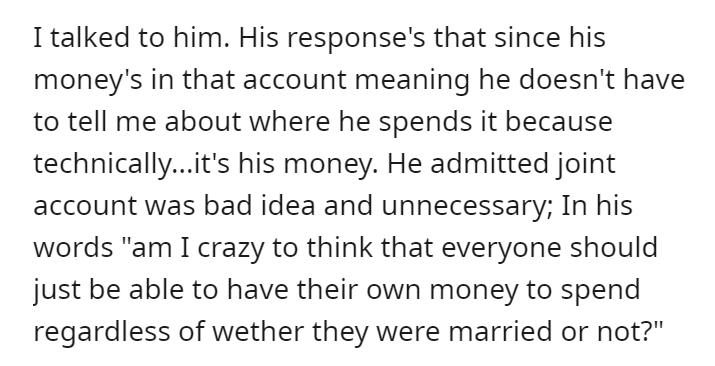 So they decided on a reasonable solution for this problem.

However, he soon changed his tone when it was his time to pay. 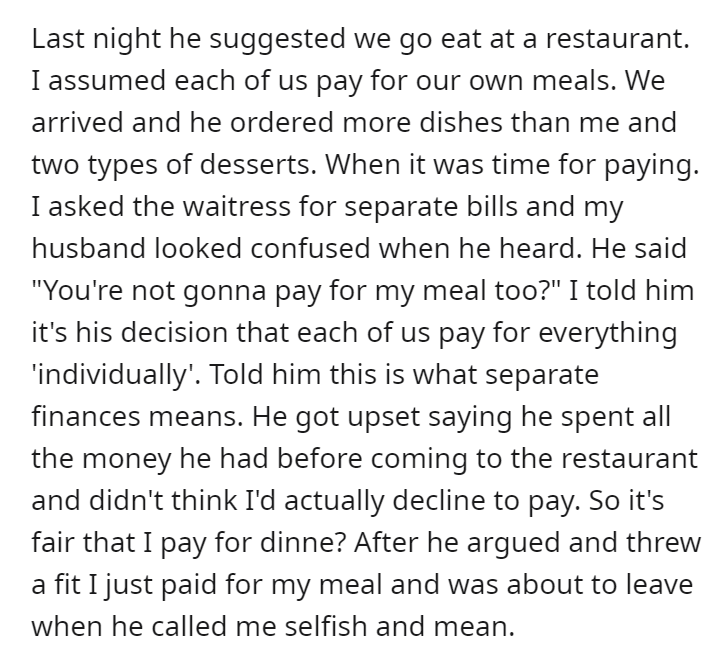 I do believe that I was acting badly but I figured he could be able to pay for his meal since that is how he becomes comfortable and be independent.

Rather than helping him out this time, she simply left him there to teach him a lesson.

He was understandably angry at how he was treated. 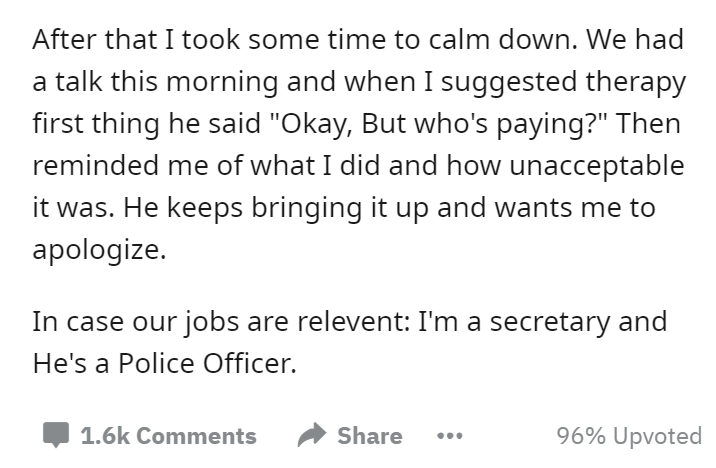 Most comments were just confused as to how they reached this point in the first place.

I agree, this marriage is heading for divorce extremely fast.

The fact that this guy is so irresponsible with money, unwilling to change, and thought he was entitled to spend OP’s salary without discussion is very alarming. He did that repeatedly from the mutual account and again when he thought OP was paying for dinner which tells us just how selfish he is.

I think OP did the right thing here. Either he learns from this very fast or in a couple of months OP should hire herself a separate divorce lawyer. –ImFinePleaseThanks

While he was in the wrong here, she was also being quite petty. 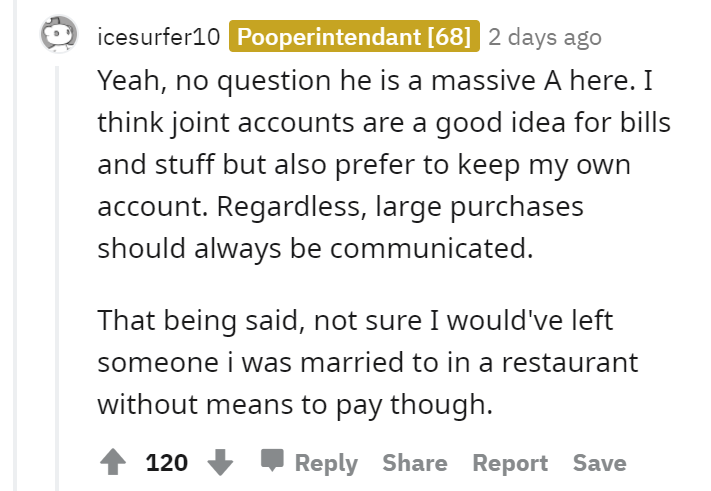 Sometimes you have to let things go if you want your marriage to work. 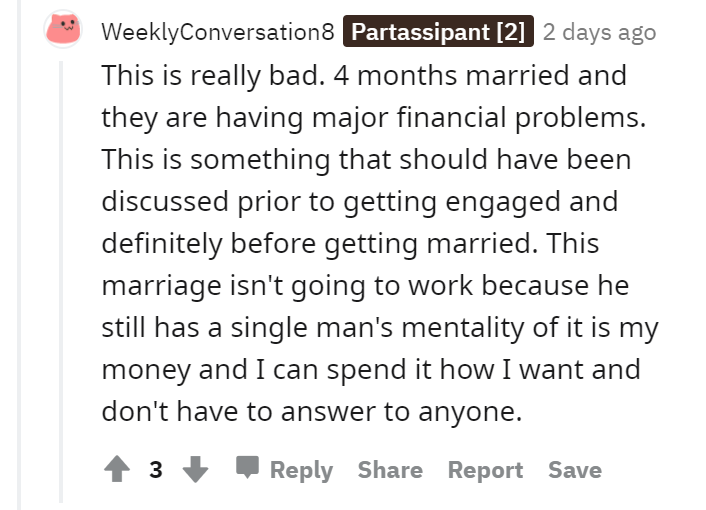 Being petty and passive-aggressive never solves anything in these situations. 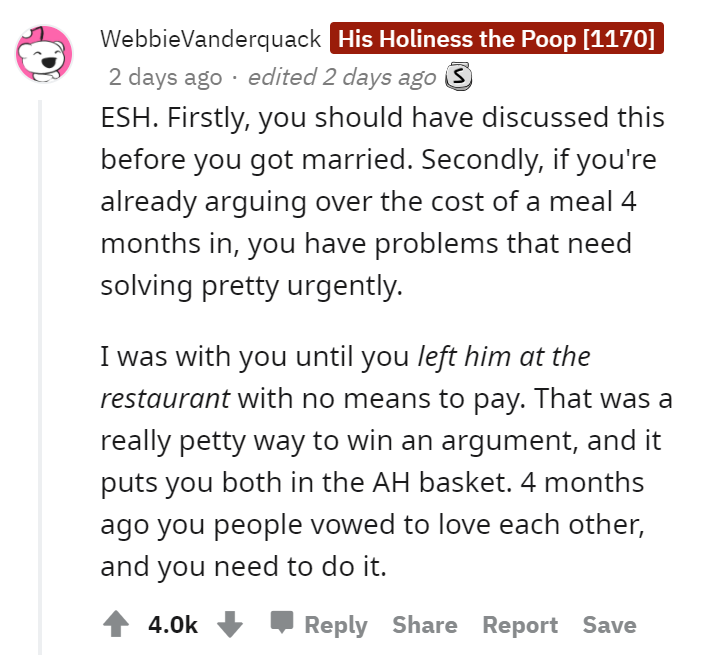 What he is doing is borderline financial ab*se. The fact that he’s a cop is already an abuse red flag – they have a much much higher rate of spousal ab*se than most professions. I would strongly recommend you take a good hard look at other aspects of your life together.

If you do decide to work things out you may also want to look at financial counseling in addition to relationship counseling. It’s up to you to decide whether who pays for it is the hill you want your marriage to live or die on, but things aren’t going to improve by themselves. –Fraerie

What are your thoughts on how she reacted? Do you think she took it too far? Comment down below and let us know.