It isn’t a kid’s job to take care of their siblings.

While it is good that parents teach their children responsibility by giving them chores. So they are not blindsided when they go out in the real world and have to deal with a lot of new things at once. However, this does not mean you can put all the work on the oldest siblings. We see this happen quite a lot especially if both parents are working and don’t have time to take care of the household.

Rather than hiring a nanny, they put all the responsibility on one of their children and make it seem like it is a job even though they aren’t paying them. This is called ‘Parentification’ and can actually have a lot of adverse effects on a kid’s psyche when they are growing up. That is exactly what these parents did. And you can see for yourself how that turned out. Scroll on below and take a look.

Some children just tend to be naturally whiny and there is nothing we can do about it. 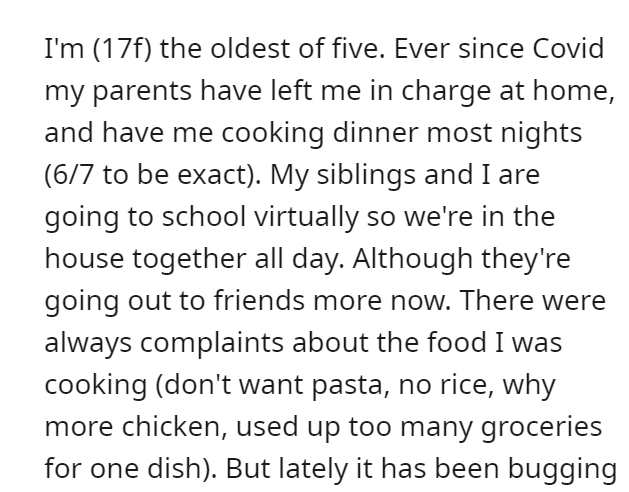 However, the parents should join in and start acting like kids as well. 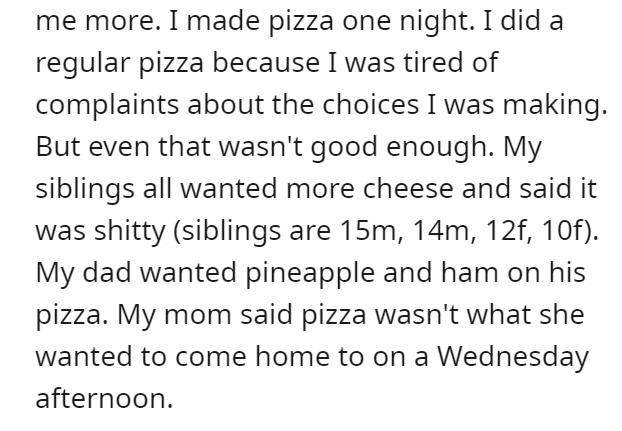 She clearly had enough of this and decided to just not cook for everyone the next day. 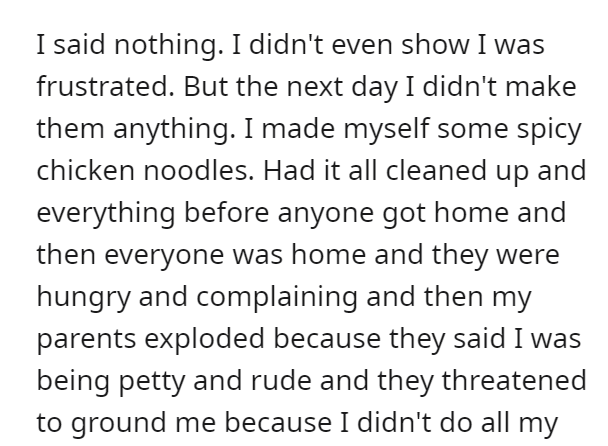 As expected her parents weren’t too happy with how she dealt with all this.

And reaffirmed that it was the wrong thing to let her siblings go hungry. 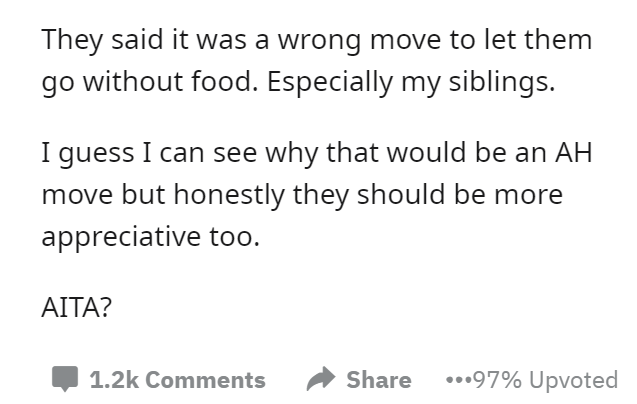 However, people had a different idea of what is wrong and what is right. 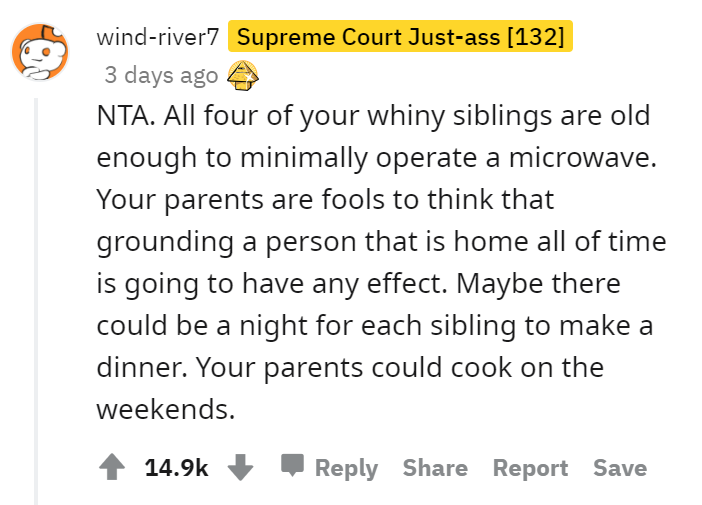 Even if the other kids are young they can still help. 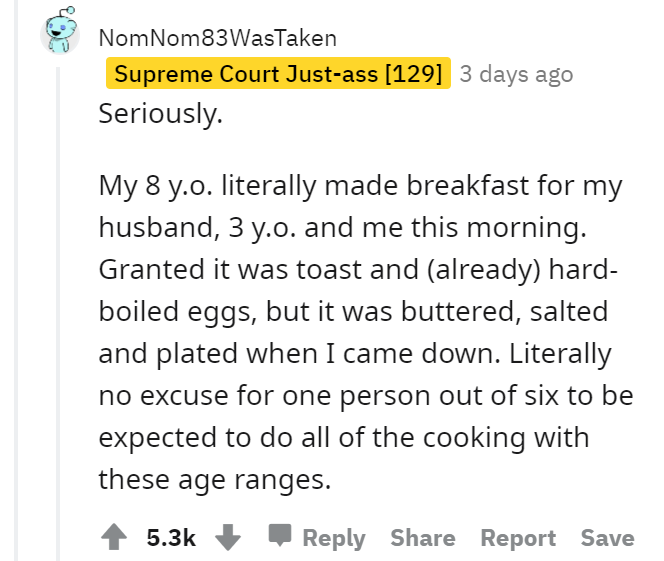 The parents should have known this would happen if they kept pushing.

This! But also, what the f**k are the parents doing putting the parenting on the older CHILD. The audacity of the parents to complain when food prepping was invented ages ago. Just because OP IS ALMOST A ‘LEGAL ADULT’ doesn’t mean they were the ones choosing to have children. OP, I was in this position too.

Good on you for doing something about this because you are being taken advantage of and they are being ungrateful by taking you for granted like this. NTA! –icecreamonmondays

If they want everything done by the time they get home, they should hire a housekeeper. 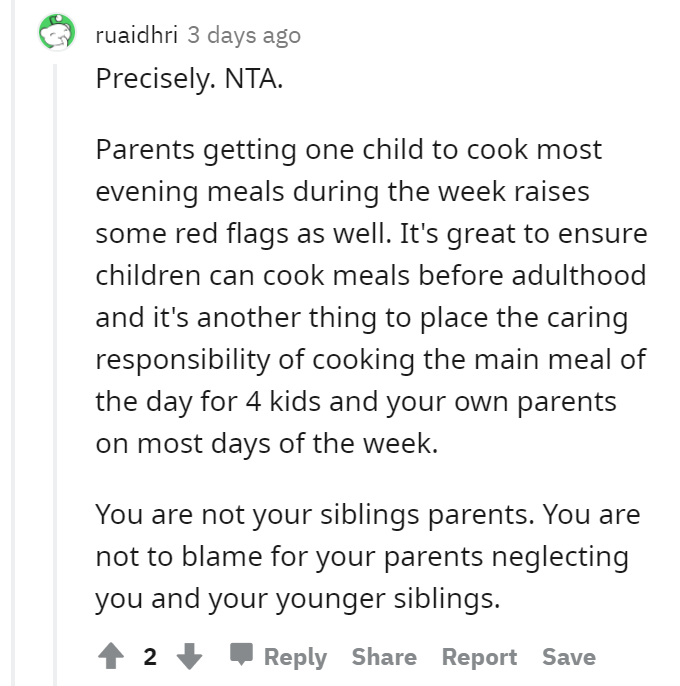 Not only that but she has to do a lot more work than just cooking for the whole family. 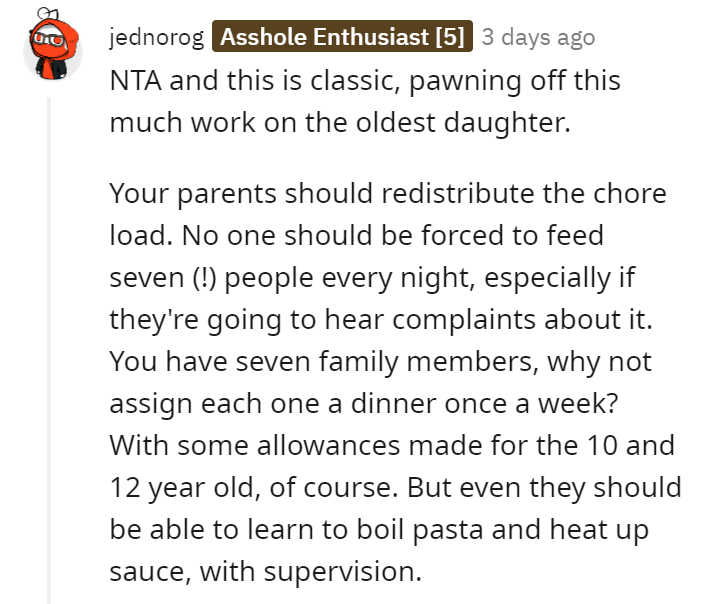 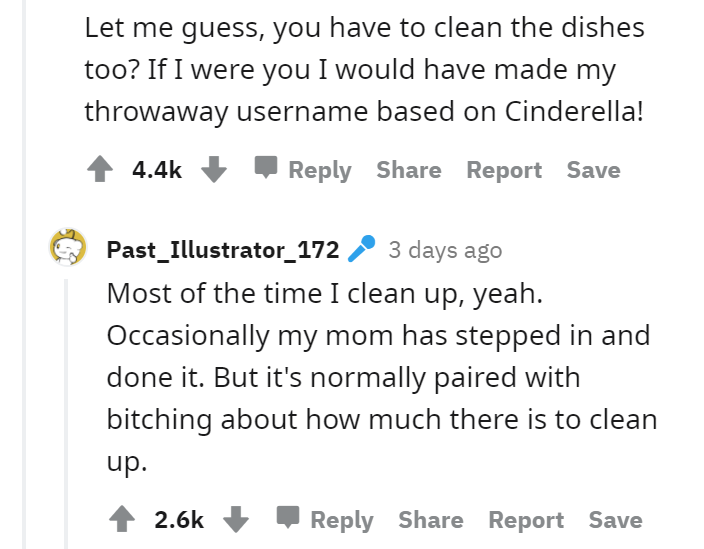 I’d take the ‘punishment’. It would be much better than doing all the chores. 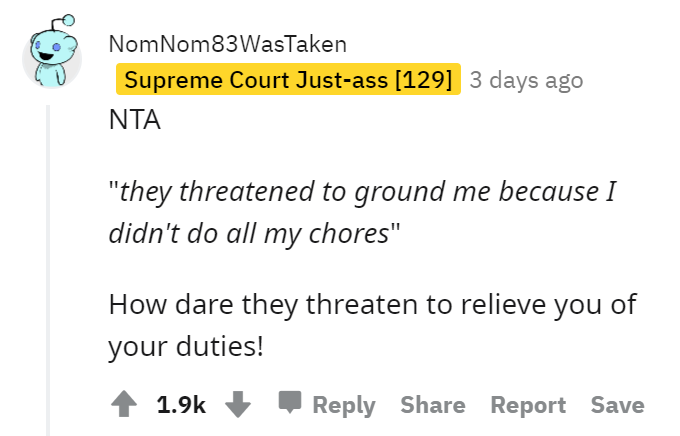 I was one of 5 kids, and the oldest 3 started cooking 1 night a week each when we were 11, 12, and 15 as both my parents were busy working. We were lousy cooks, to begin with, but grumbles from others in the family were rare (frankly my parents weren’t great cooks either). Eventually, the youngest 2 also took on cooking duties too when they hit their teens.

The good thing was the cook got to choose what was for dinner – baked potatoes or spaghetti bolognese or other tasty, easy to make and budget-friendly options. –frankiesmile

How would you react in this situation? Would you just stay quiet and wait till you can move out or try to talk to them? Comment down below and let us know. Don’t forget to share so others can join in the discussion as well.