Many people are great at acting.

We all get into relationships that we later regret. I mean we can see the red flags but choose to ignore them. I suppose love really is blind and it can land you in some hot waters. Although that is not what happened in this scenario. Thankfully the thieving girlfriend got what she deserved.

Scroll on below and take a look at how it all started.

Honestly, many just want the university experience and that means being in a poorly thought-out relationship. 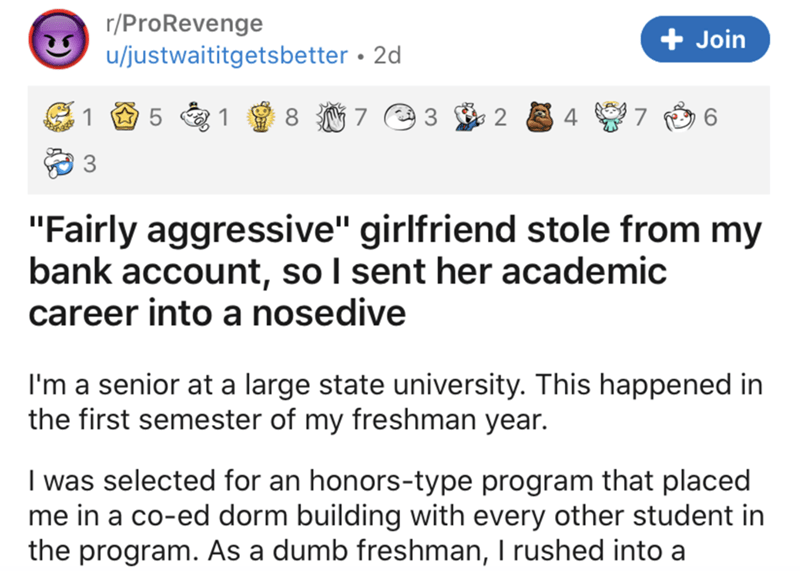 Anyone who bosts about being fairly aggressive should not be trifled with let alone be in a relationship with. 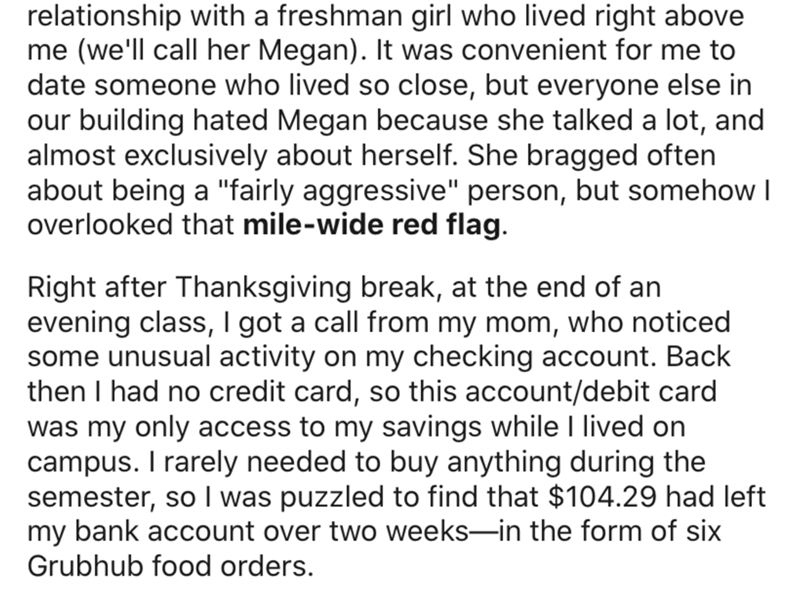 At least it isn’t bad advice.

It seems the customer service wanted you to know who stole from you. 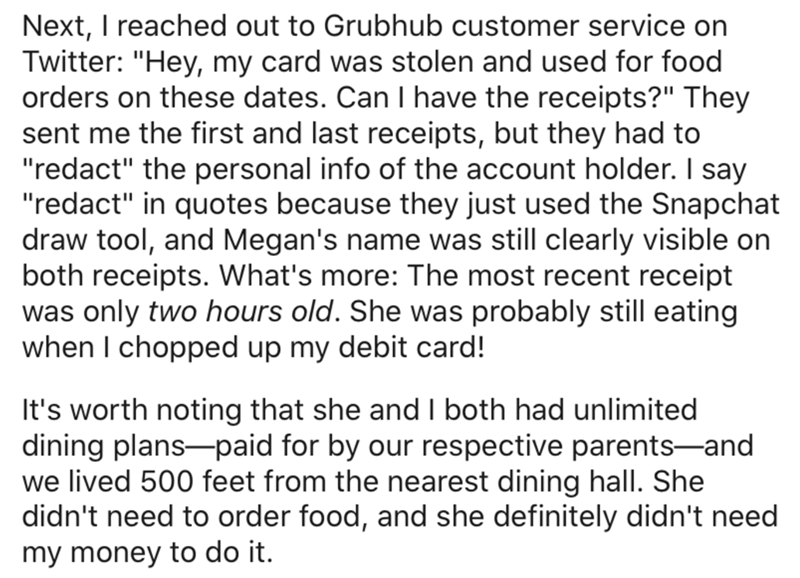 You might think this is where it ended but we still have a lot of story left to go through. 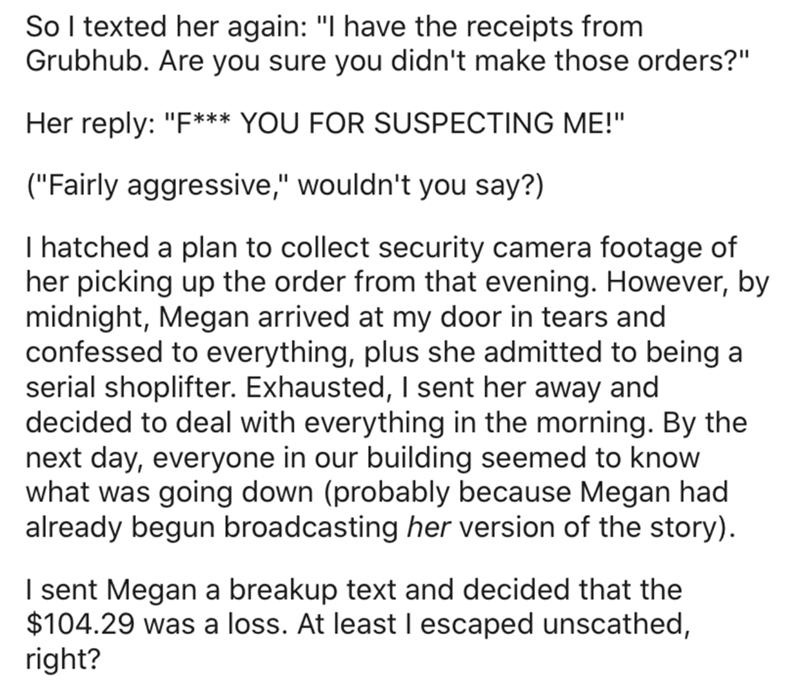 I guess her aggressive tendencies are coming out. 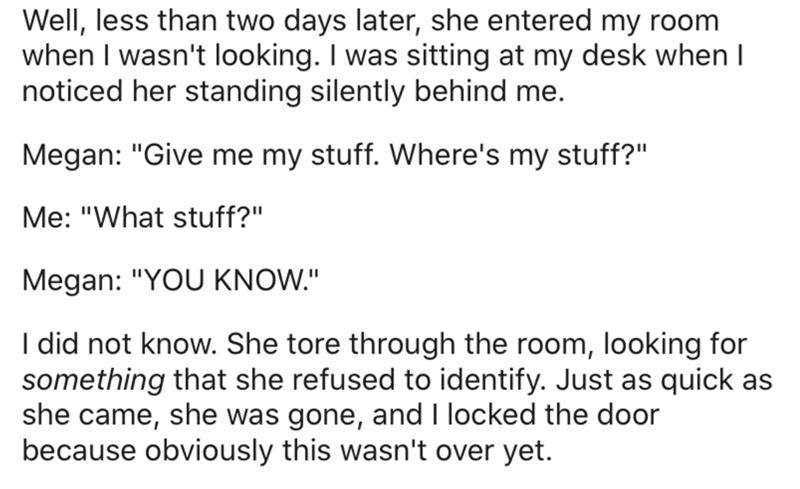 Okay so maybe she was lying when she said ‘fairly’. 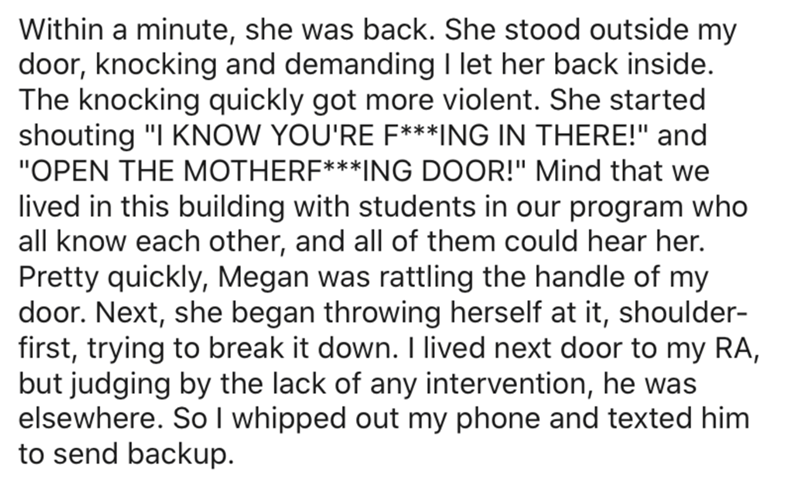 Really? All of this over a t-shirt that was supposed to be a gift?

The campus wasn’t going to let her get away with this so they set up a hearing. 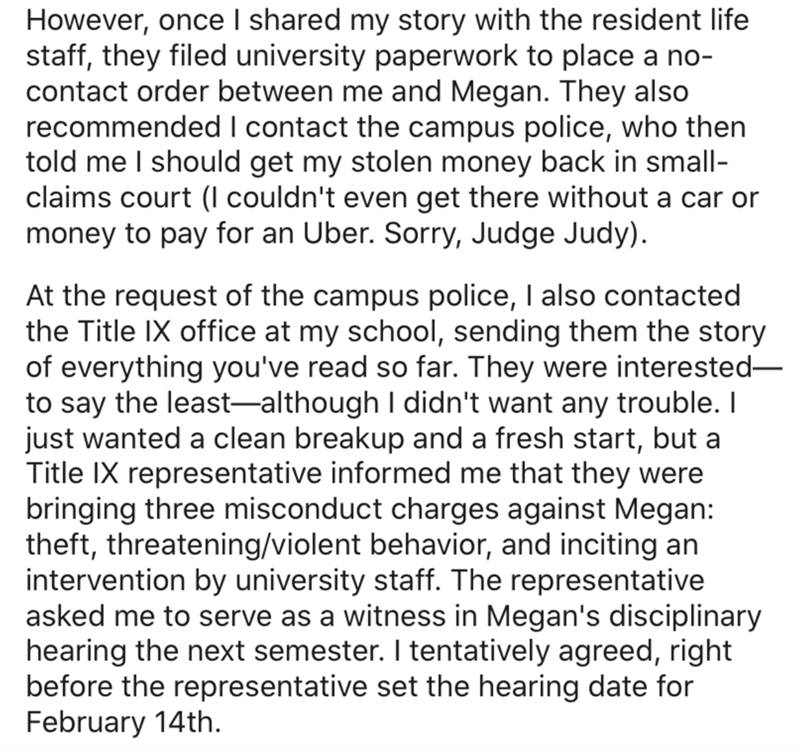 Oh my god, if I had a d**k I’d totally have a justice boner right now.

The cherry on top is that it was on Valentine’s day. 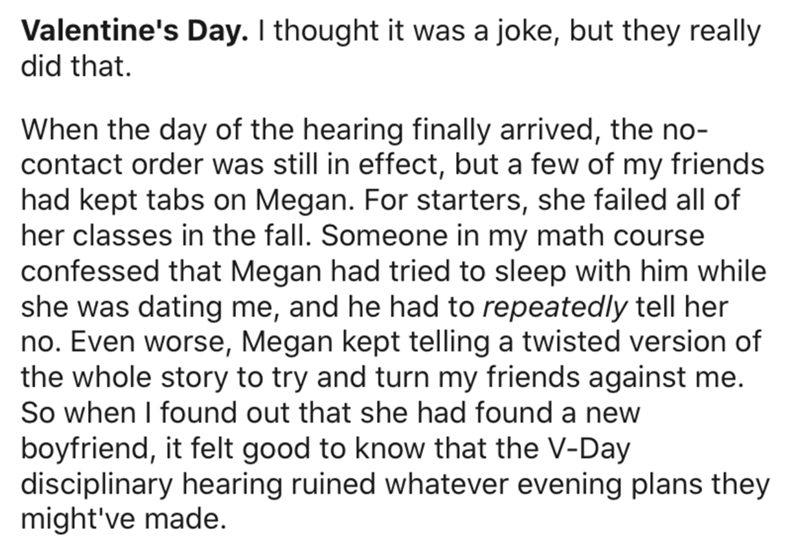 Funnily enough, her side brought a lawyer. 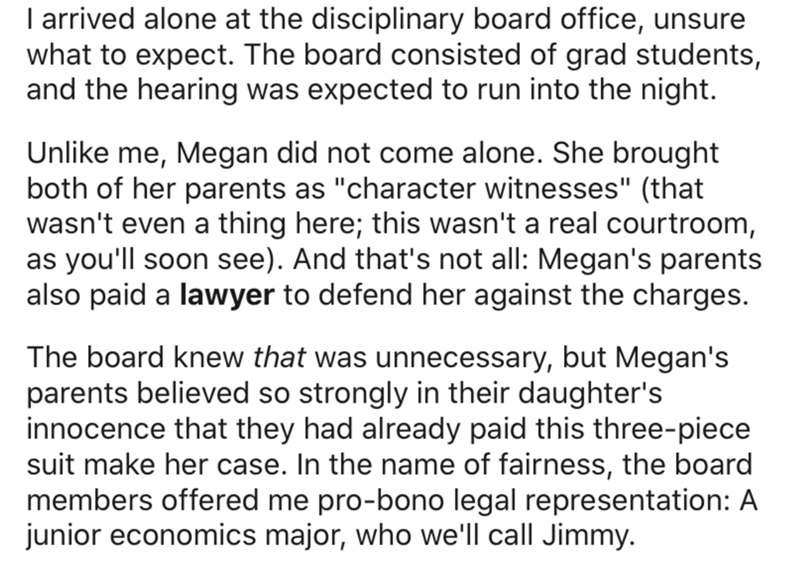 This is really great revenge and a whirlwind of a story, but my favorite part is imagining the aggrieved grad students heading up the hearing telling a whole ass lawyer, “Sir, this is not a legal proceeding.”

Real “This is a Wendy’s” vibe. –yakshack

But he still had an ace in his pocket that he pulled at the right moment. 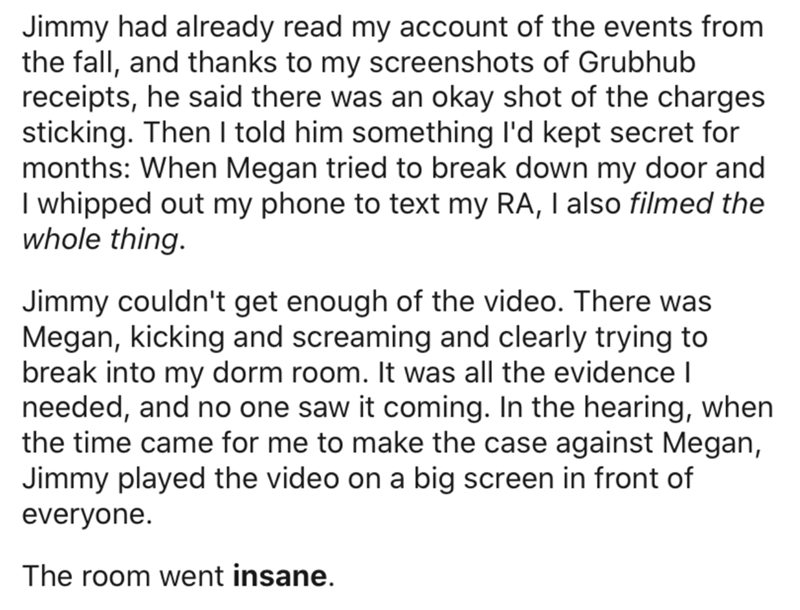 And that is when she realized she f*cked up.

Her parents couldn’t believe their angel daughter would do something like this. 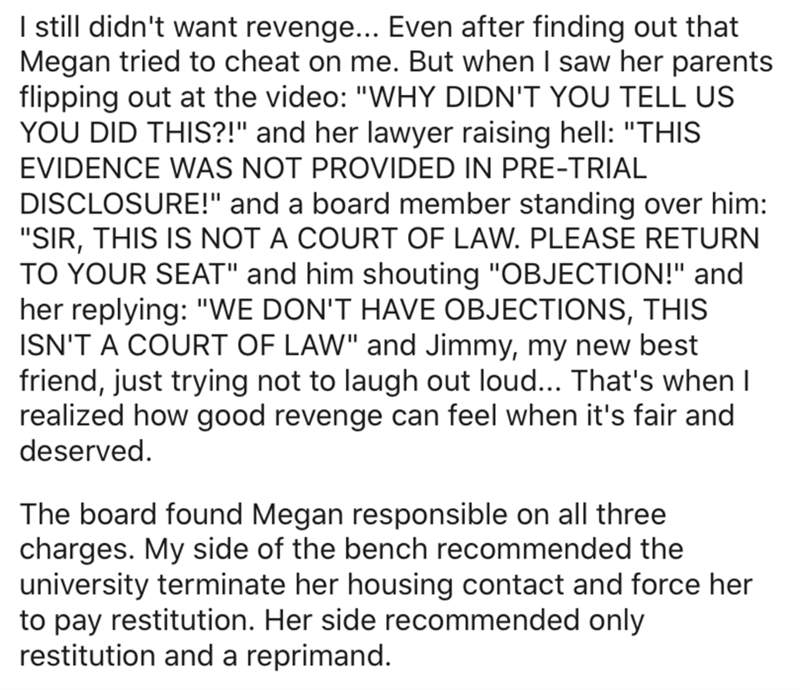 Lawyers always want/need to know ALL the facts beforehand. It lets them determine the most likely outcome and the way to find the least unfavourable outcome. Megan didn’t inform the lawyer that she HAD in fact been stealing and that she’d gotten enraged over nothing, and that left the lawyer’s carefully made plans in total disarray. –tashkiira

And that is how that story ended. 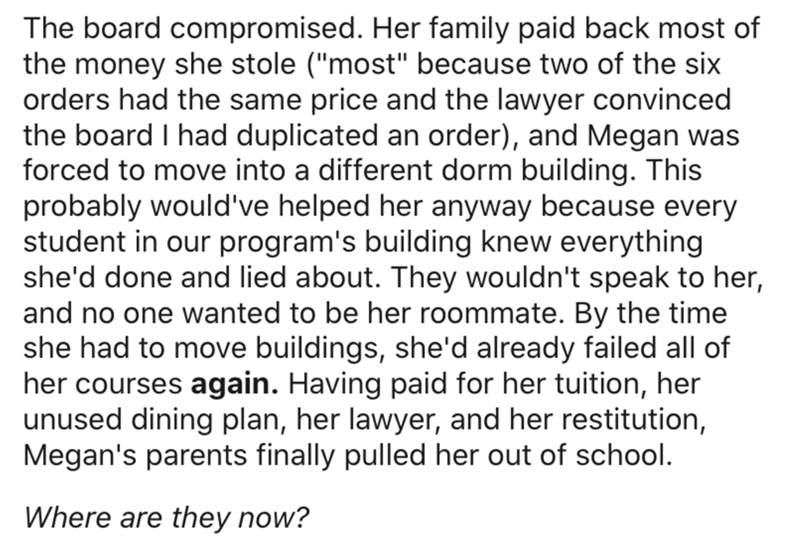 And she is still reaping what she sowed for herself. 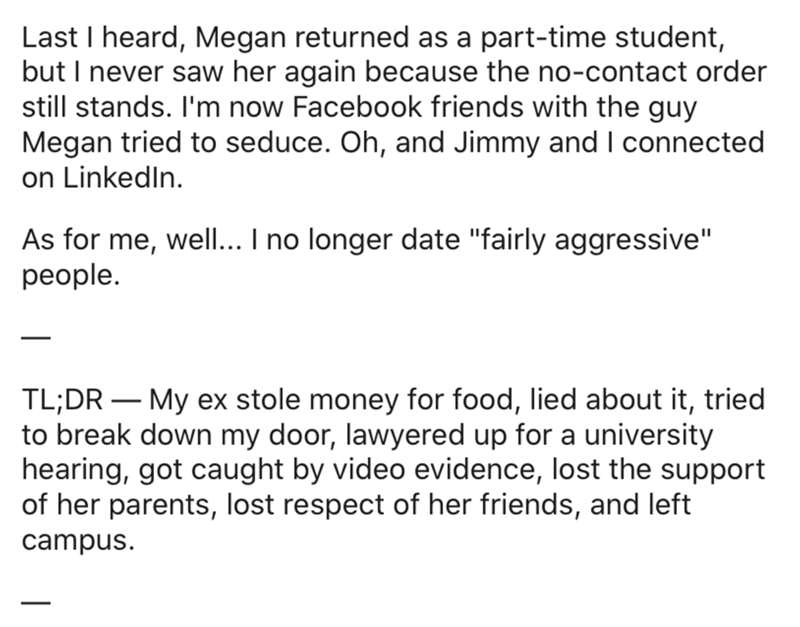 What do you think about the ‘fairly aggressive’ girlfriend? Would you date someone like that? Let us know in the comments below.