It is no obligation to have children. You don’t just create kids out of thin air and leave them out in the wild so they can grow up on their own. Children are a huge, lifelong responsibility. It takes patience, finances, unconditional love, and commitment to raise them. It isn’t everyone’s cup of tea. And we should let people make this decision on their own instead of forcing them to have children just because that is considered normal in society. If we stopped pressurising our family members to have kids when they don’t want any, there would be lesser kids born into toxic families where they were never wanted.

Redditor Doesnotcontributes shared her story of how her father excluded her from the will just because she refused to have children with her husband. She was hosting a Thanksgiving party at her house, but after hearing what her father had to say, she kicked her family out of the house. She asked on Reddit whether she was an a**hole for doing so. Scroll down below to read her story:

Out of all her siblings, she has the nicest house, so she hosts all the family events. 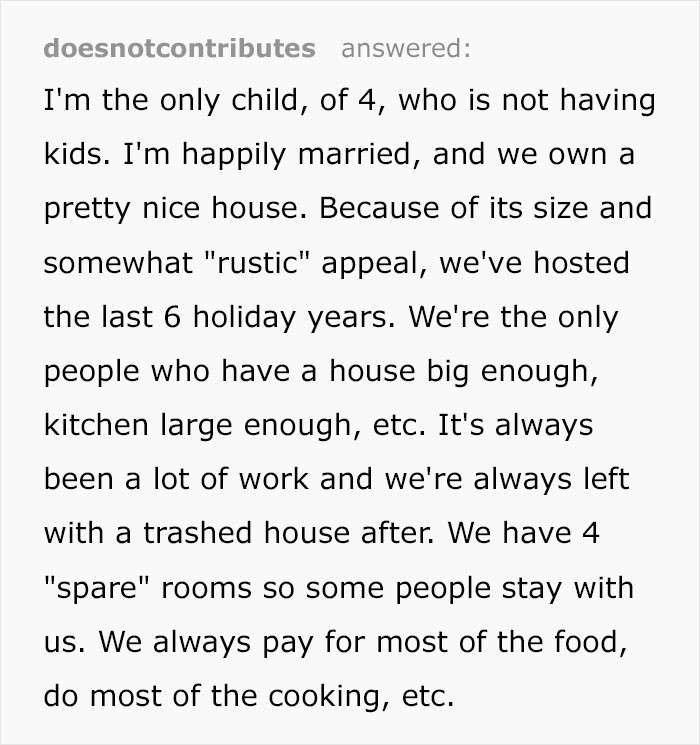 While chatting after dinner, her father said she shouldn’t be included in their wills. 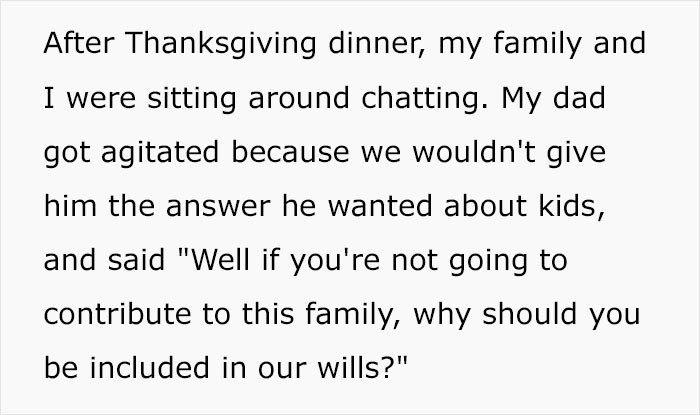 Her siblings agreed with their father.

Obviously, it came out as very shocking to her.

Her dad was insulting her in her own house and the siblings took his side as well.

So she decided to give them what they deserved. 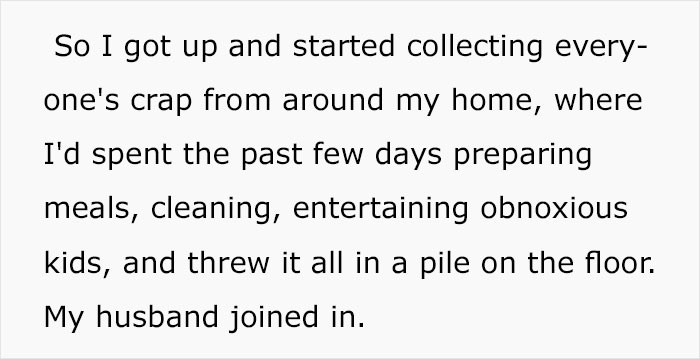 She kicked them out of her house! 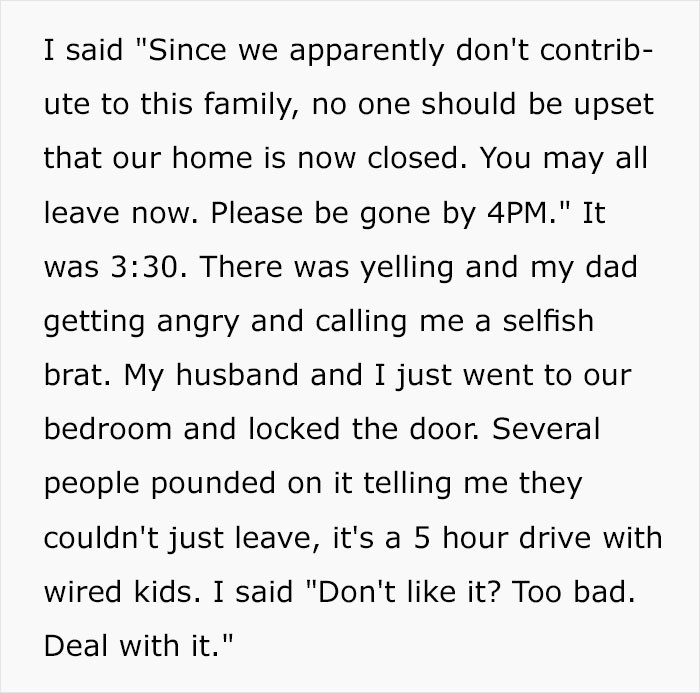 Obviously, they were all very pissed.

However, they all decided to ignore what happened and started making Christmas plans, which she refused to host. 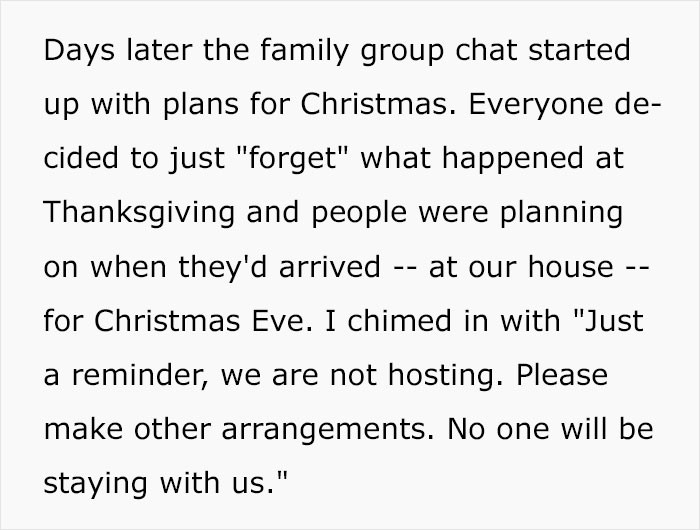 So they ended up having no Christmas. 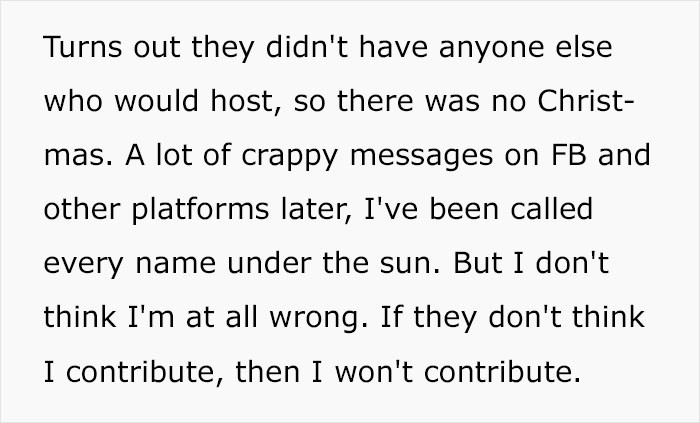 Why is it any of their business if she wants children or not? People need to stop poking their noses in other people’s personal matters, including family. Being related does not mean you get to insult someone over their personal preferences. Motherhood is not a joke and no one should be forced to have children if they don’t want any. 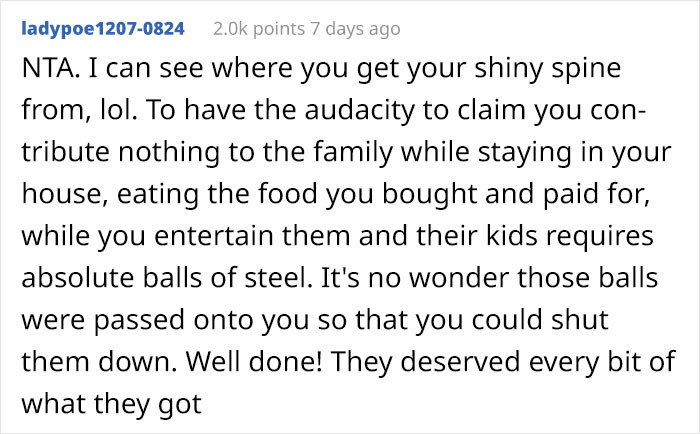 Also, if you don’t know already, NTA means “Not the A**hole” 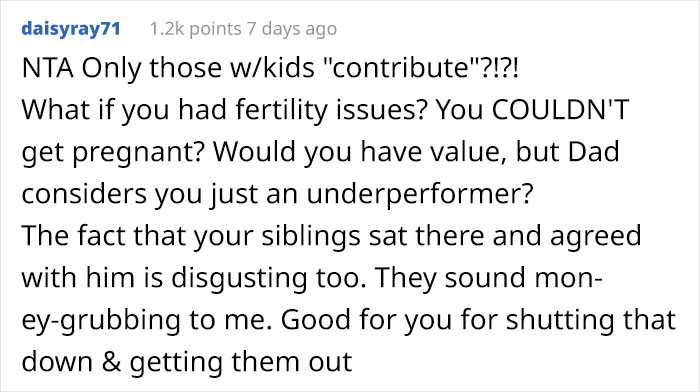 You get what you deserve.

How can anyone be jealous of their own blood?

People’s families can be really crappy.

She was certainly doing more for the family than everyone else.

What do you think? Did she do the right thing? Let us know your thoughts in the comments below!