Having a family and being surrounded by them is the most beautiful and blessed thing anyone could ever wish to have in this life. We feel that life is incomplete without our siblings and parents, and we can’t imagine going a day without seeing or talking to them. There are times when our family members require our help and support or wish for us to stand by their side during their difficult times. And there are times when we can’t wait to share our joyous occasions with them and to celebrate our accomplishments and successes with them as well

It’s good to help them out in their difficult times or days, but, there are times when the families must know about the boundaries. Because every relation in this world becomes beautiful if they are revolving inside the boundaries, and not outside. If you cross this fine line, then there comes a crack in your relationship that is quite hard to fix.

Like this Reddit guy, u/IamAndy123, who shared how he used to look after his younger brother’s family when he needed to travel for work, despite the fact that he and his sister-in-law were not on the best of terms at the time, he still took care of them. When the OP’s sister-in-law asked him to look after his nephews while he was about to attend his girlfriend’s art event on that particular day, the situation became problematic.

The founder of “Walking Outside in Slippers”, Samantha Scroggin, told about the boundaries and the limits of asking for help within the families.

According to her: “I think when establishing boundaries with family members, being clear and using good communication are the best routes. You wouldn’t want a family member to misinterpret your actions for rudeness or lack of appreciation for their help with childcare,” she said. “I would hope that close family members can communicate freely about expectations for child care, but I know that personalities differ and some would rather take on an extra burden and avoid conflict.”

Life is beautiful when you live with your families, but with some boundaries!

To read the whole story, just keep scrolling down!

Here’s an AITA post about how the OP got tired of babysitting his younger brother’s children while he was away on business. 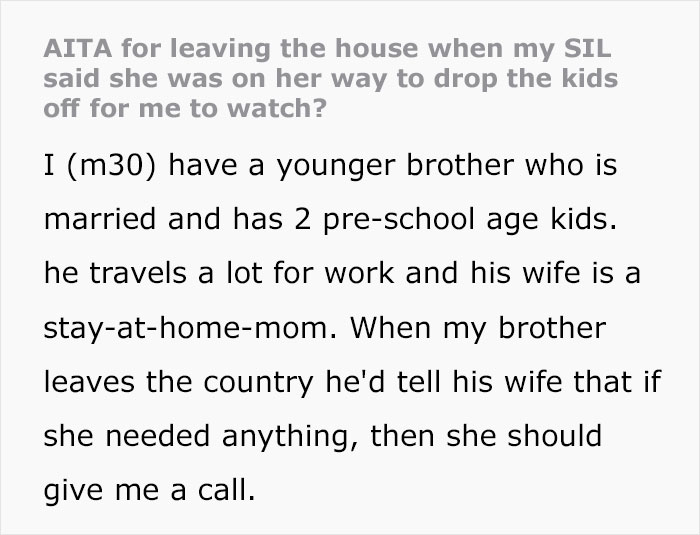 The OP’s younger brother had asked his family if they could rely on him while he was away on business.

The OP and his SIL were not on good terms.

When his SIL asked if he could look after his nephews, he informed her about his busy schedule. 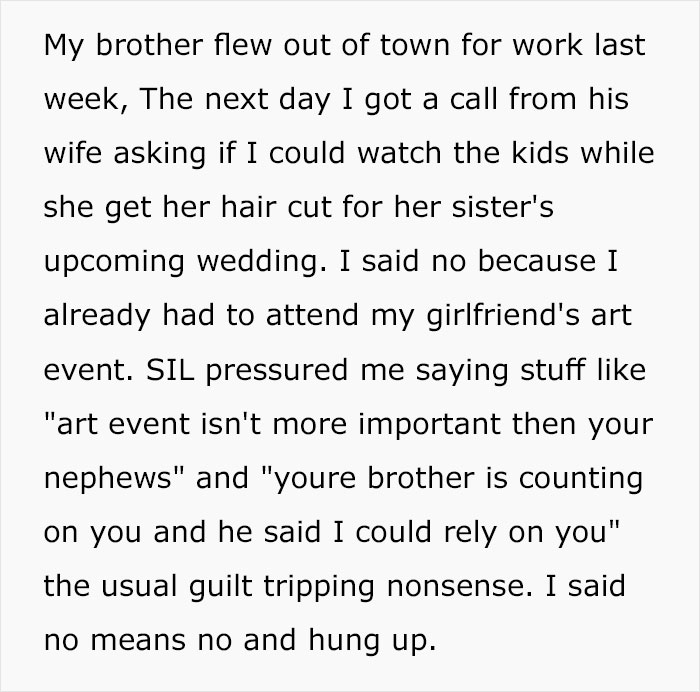 The OP received a text from SIL that they are on their way home, and the OP left the house right away.

His neighbors had informed him of his SIL’s unusual inspecting behavior. 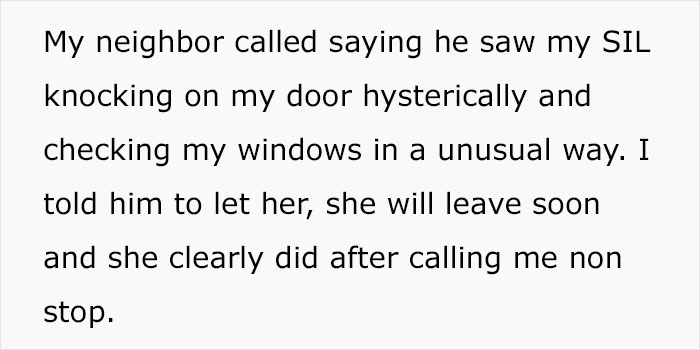 His younger brother was angry and furious with him as he left the house and had unattended calls from SIL. 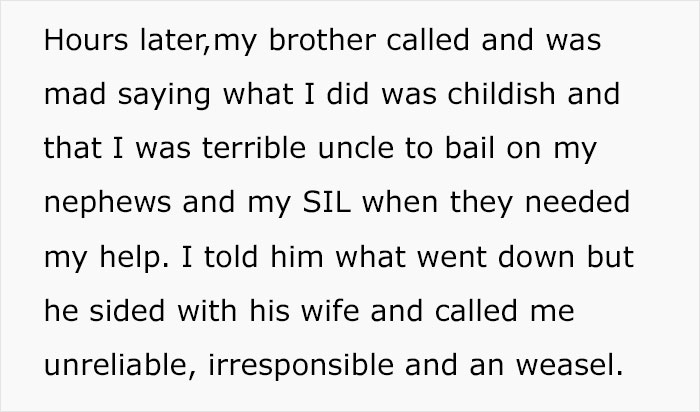 The younger brother and his wife are now furious with the OP and want him to apologize. 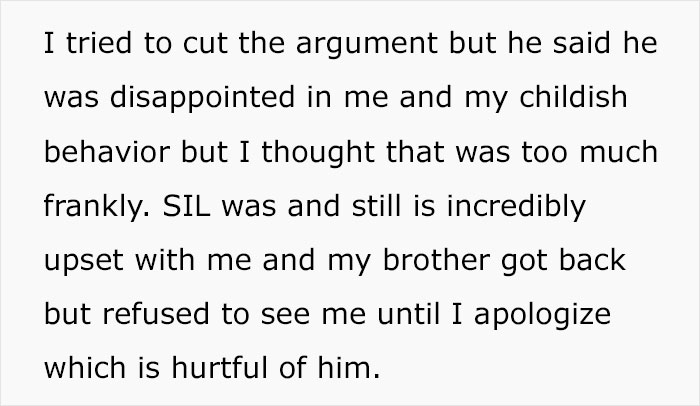 Now, the OP is questioning whether to apologize and resolve the matter with his brother or to simply leave them for the rest of his life.

There isn’t a “one-size-fits-all” approach for all family members when it’s about babysitting or taking care of them, according to Samantha. And that all families are different.

According to her: “Some families are very close, and the aunts and uncles and grandparents are practically other parents to the kids. Others are more distant. Once again, I think good communication is important to set the ground rules and ensure everyone is comfortable with the babysitting expectations,”

Samantha. the founder of ‘Walking Outside in Slippers’, shared more interesting things about her family dealings and regarding babysitting. She stated: “My husband and kids and I live several hours away from both sets of grandparents, and other family members. Because of this distance, we are rarely if ever asked to babysit,”

Samantha also informed “However when we visit family, the grandparents often take our kids so we can go on a date for dinner, and maybe even a short weekend away alone. I think the distance makes the grandparents more eager to spend what time with our kids they can. My husband and I try not to abuse this privilege and expect too much, but it is such a relief to have occasional help with feeding and caring for the kids.”

Two things are at the heart of the Reddit story. To begin with, Redditor u/IamAndy123 feels as if he never had a say in how frequently he can babysit his nephews. His younger brother, he believes, threw the entire babysitting business on his shoulders.

Furthermore, there were some boundary issues with his younger brother and sister-in-law.  And there is nothing wrong with asking a family friend or relative for support. But, forcing them to change important plans isn’t the respectful way.

It seems that this Redditor was completely fed up and frustrated babysitting and taking care of the family. so leaving the house, just to avoid the SIL was the last option left for this guy. Maybe, he didn’t want to discuss this family drama with his family because no one can understand your point of view at first.

That’s the reason why setting boundaries is important within the family. You must, however, exercise caution when doing so. According to relationship coach Alex Scot, the closer you are to someone, the more flexible you have to set those boundaries.

According to the expert: “Without them [boundaries], we live our lives at the expense of ourselves. The mindset for many when it comes to setting boundaries is that they feel selfish, or that they aren’t being a good partner when they implement them, so they avoid doing it altogether,”

“Boundaries are there for us to be able to take care of and to protect ourselves so that we can show up and operate within our lives as successfully as possible.” 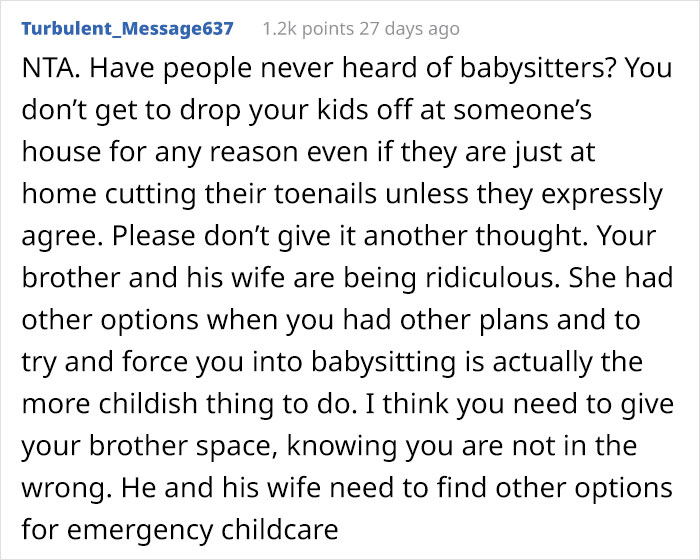 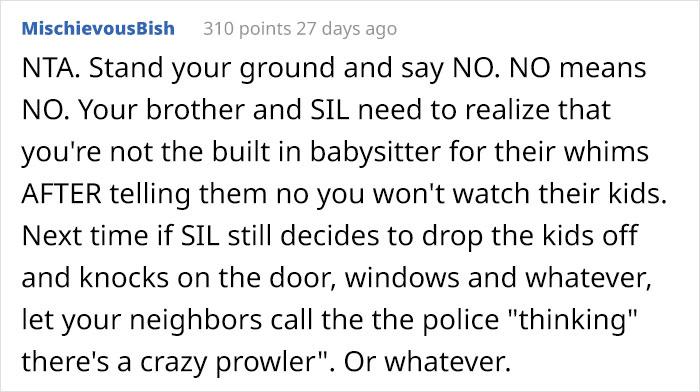 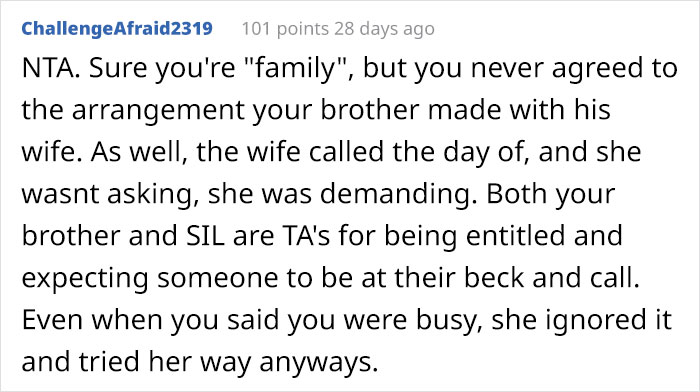 What are your thoughts on this family drama? Let us know in the comments area below!