You can tell a lot about a person by how they treat others.

Especially how they treat the waitstaff or anyone in the service industry. We have all heard stories of terrible inlaws who ruin everything for their children but we think it is all just the work of fiction and that nothing like that can ever happen to us. That is exactly what this naive guy thought. After all his parents were perfectly fine with his girlfriend and didn’t ask many questions either. But the parents of his girlfriend were another story entirely.

Not only was his ‘mother-in-law’ rude towards the wait staff but she also couldn’t see why that was wrong. Making a waiter cry is probably not that big of a deal for her from what we can clearly see here. You can take a look at the whole story by scrolling below.

We have Ellen, a woman who clearly thinks she can do no wrong. 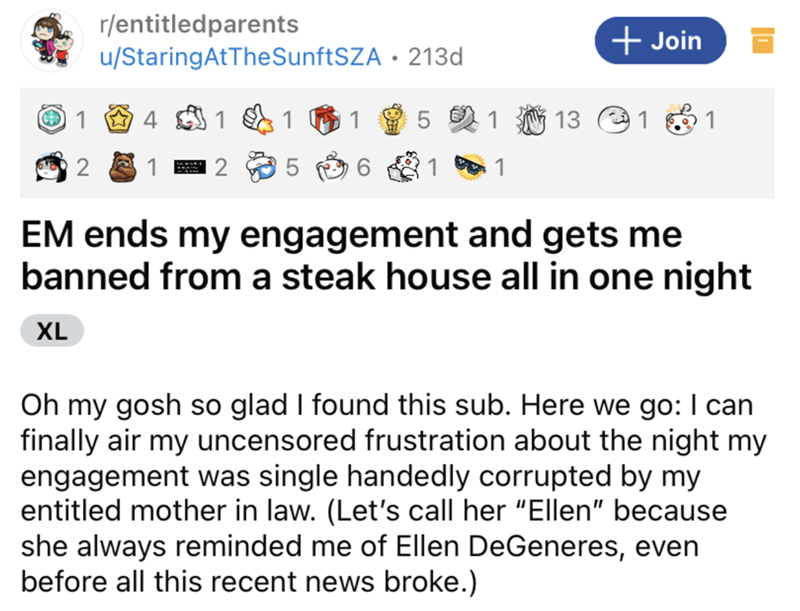 He was quite excited to meet her parents and didn’t believe that anything could go wrong.

After all, his parents were quite chill about the whole idea of engagement. 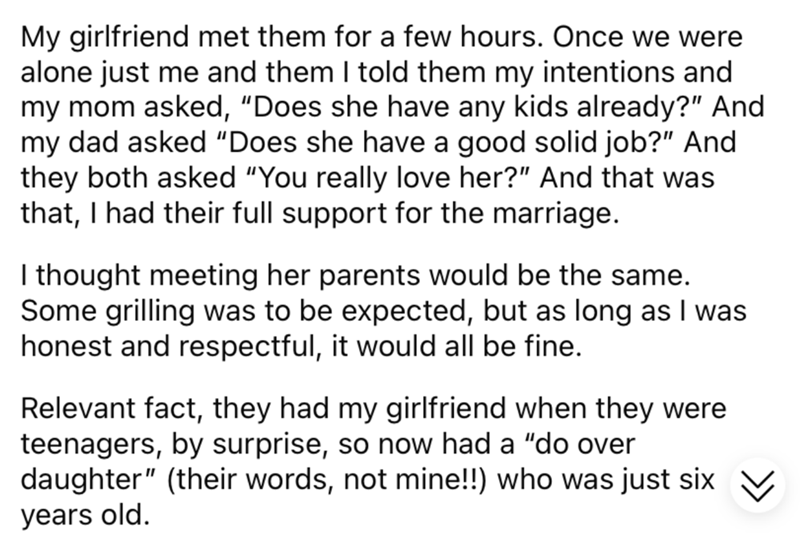 However, that is when things started to take a turn. 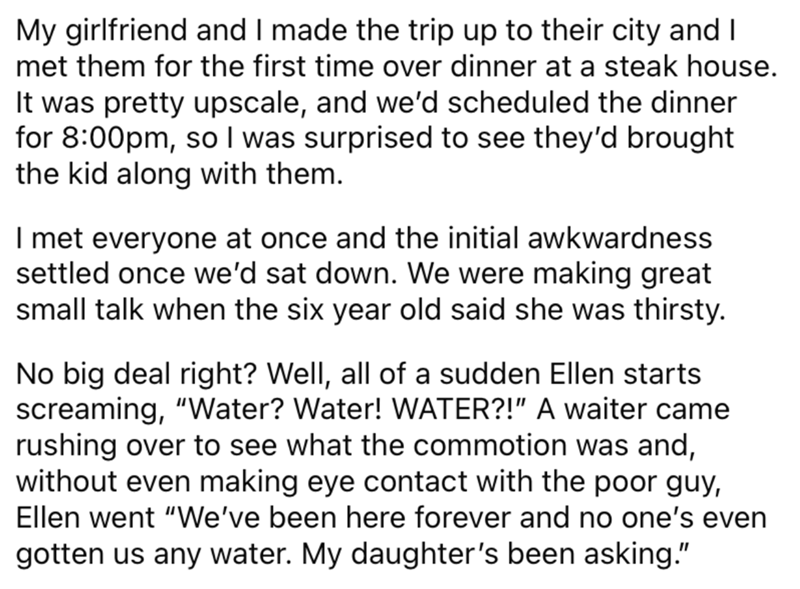 They had only been there for a little while and already her entitlement was showing. 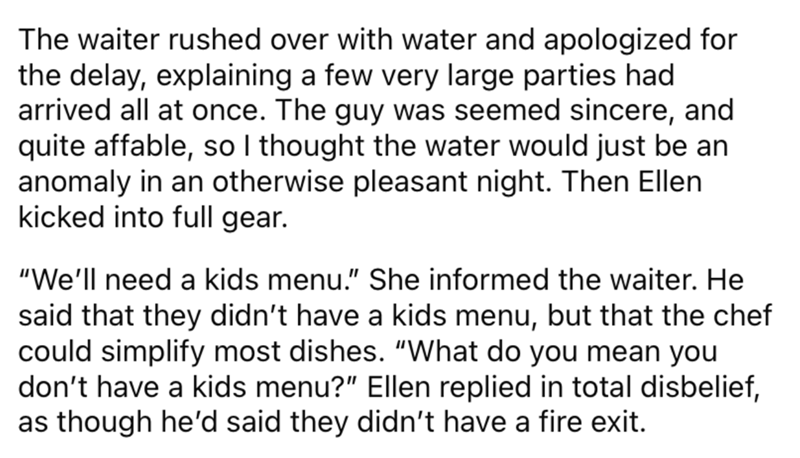 It was clear that she did not think highly of him for which he could return the favor. 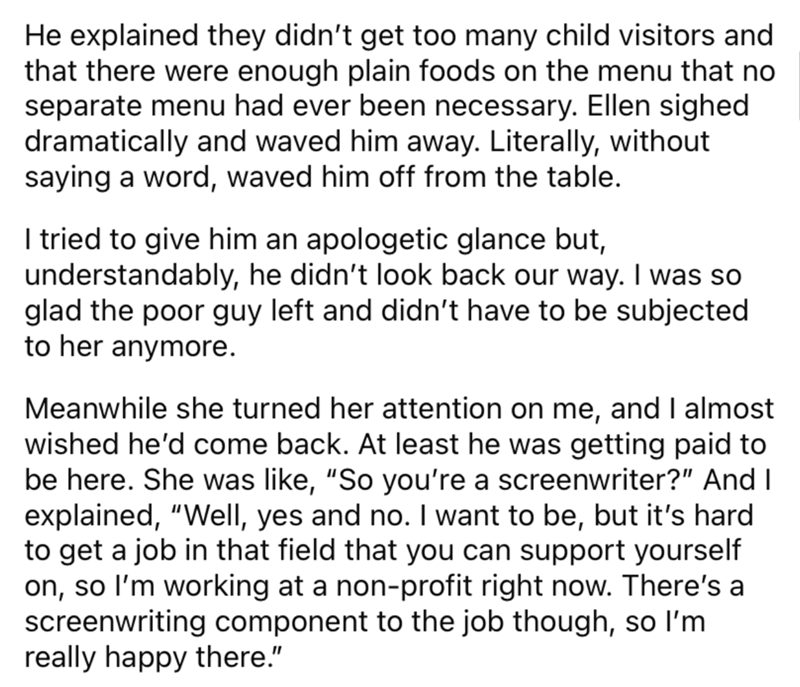 The waiter was probably dreading coming to their table but it was his job at the end of the day. 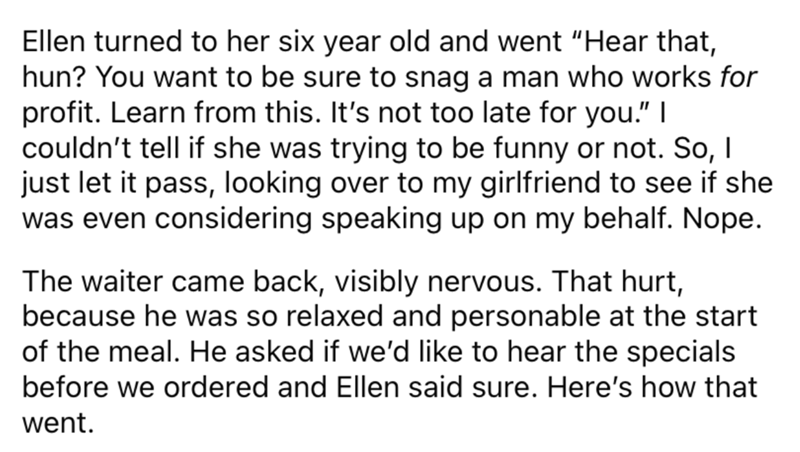 The entitlement is clear even through the text.

The other people on the table hadn’t even ordered yet and everyone acted like that was normal. 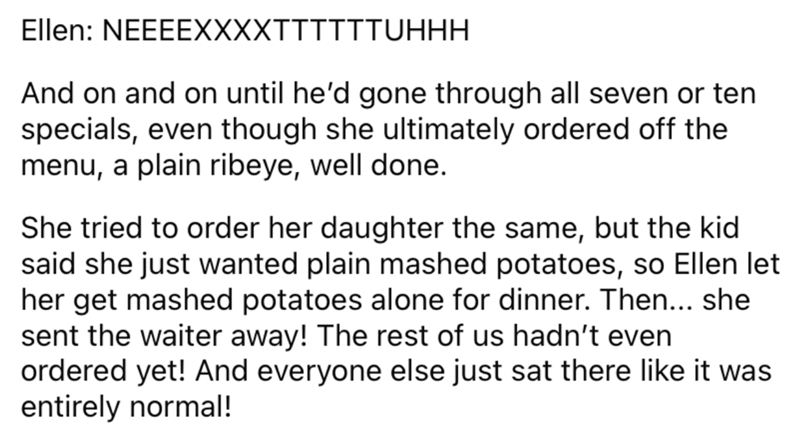 The daughter had been so brainwashed that she thought this was completely normal behavior. 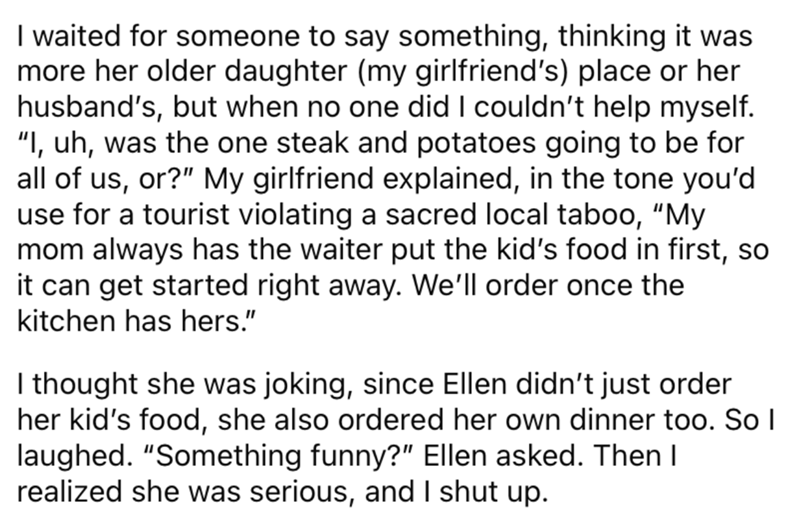 Unsurprisingly enough, things didn’t go smoothly after that either. 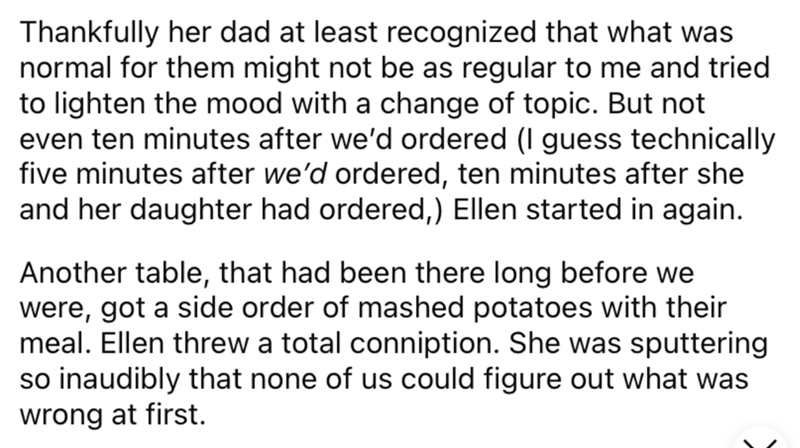 She made a huge ruckus about the food which was to be expected. 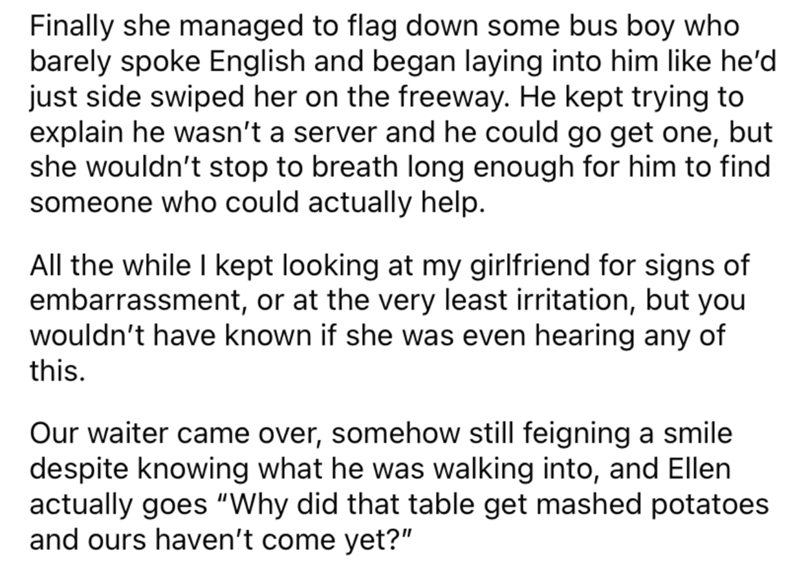 She even thought her daughter was entitled to her food first just because she was the youngest. 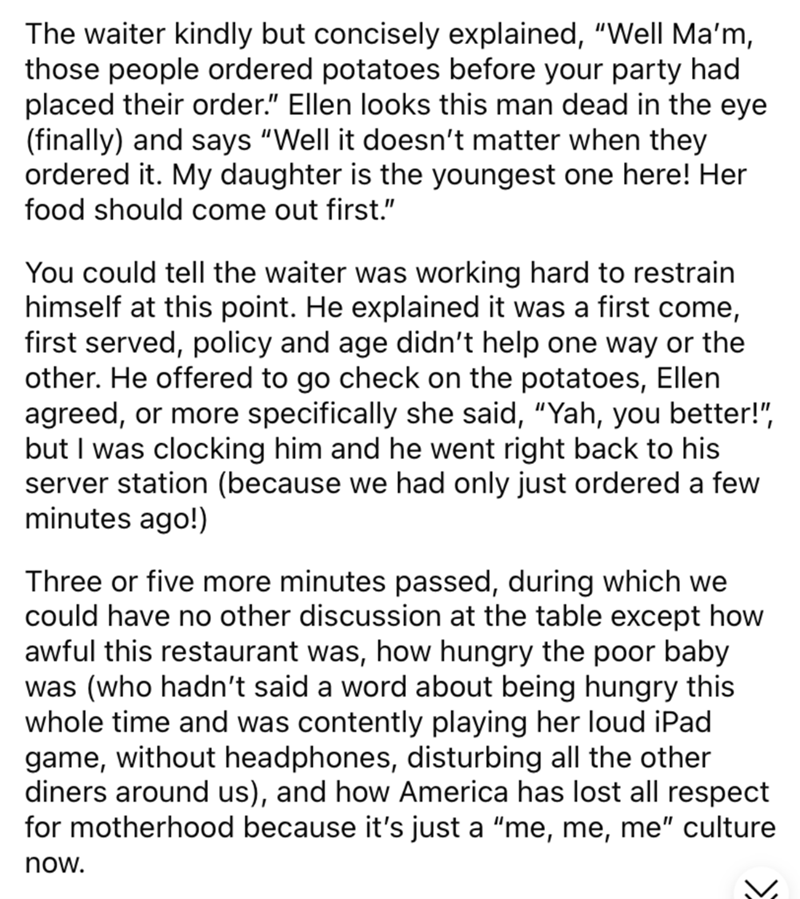 The mother-in-law just keep making everything worse and everyone did nothing to stop her. 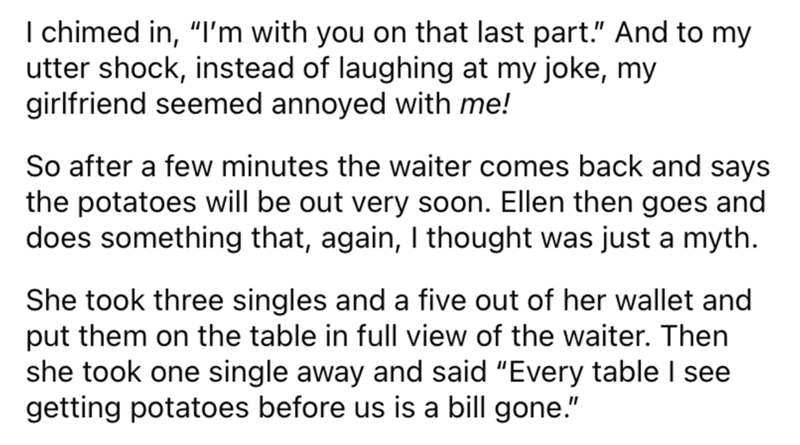 They just kept enabling her even when the waiter was quite frustrated with her behavior. 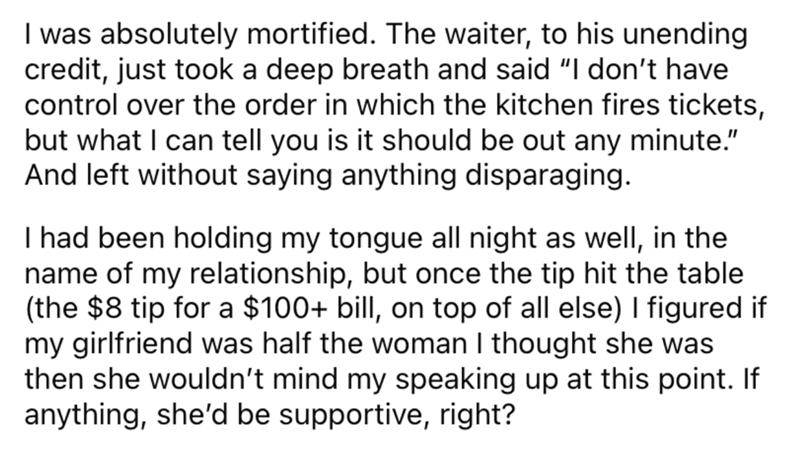 And then she had the audacity to steal someone else’s food. 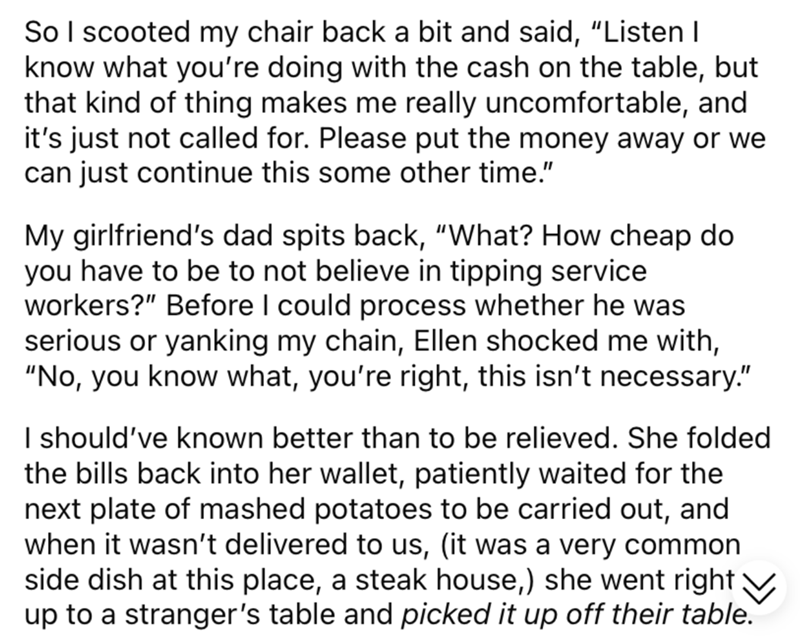 The thing is if she never had a proper example or someone goes against her mother, then she sees nothing wrong that’s how she was raised. In my experience, it takes A LOT to show the kids that that behavior is not ok. My MIL expected a call from my husband and his brother every day when they went to college and they did as they were told. After my husband and I got married she told me that she expected a call from me every day too. I should mention I’m hard of hearing and have a very hard time hearing on the phone. I thought it was weird but we had just moved 5 states away and obliged her sort of by calling her maybe 2-3 times a week about as much as my own mother.

I started a 2nd job and those calls went down to 1 a week maybe. She called my husband and said how upset that I never call her, and how he should tell me to call her more. (She never called me/initiated contact nor responded to texting) My husband was upset that I didn’t call her every day. I asked him if he called my mom every day or even once a week and when he said no why would he. I told him it’s a crazy unhealthy double standard that they expect me to call her more than my own mother while working 2 jobs.

It took a little over a year (and many other issues ranging from mild to flaming hot) to get him to realize mandatory calling is not normal especially when your 25. All that to say everyone in the above situation needs therapy and social skills training otherwise nothing will change. –Gingysnap2442

The little girl was clearly not corrupted by her mother and so even she thought it was unnecessary. 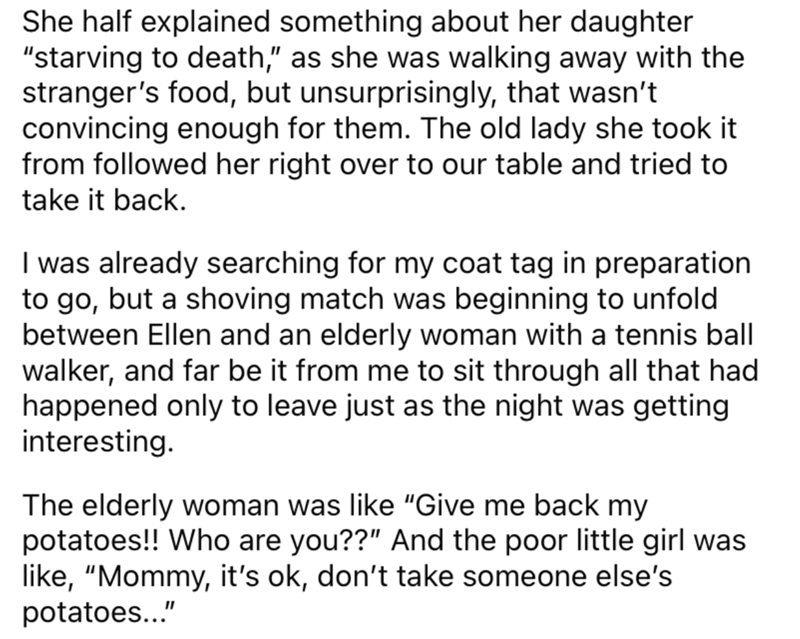 Unsurprisingly, the restaurant had enough and kicked them out. 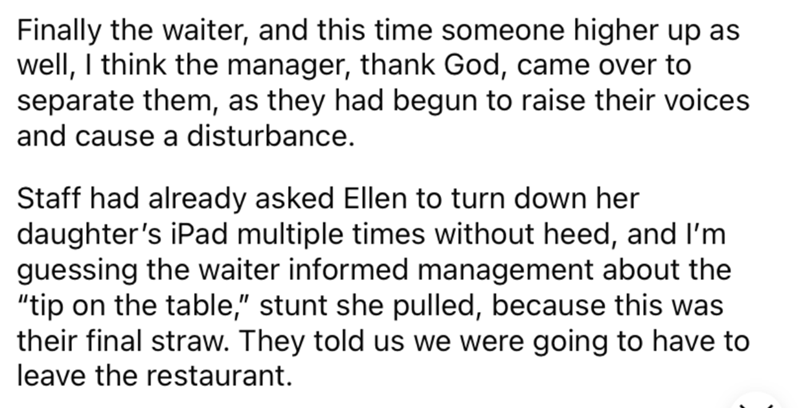 To make matters worse, his girlfriend thought her mother did nothing wrong and it was all the restaurant’s fault. 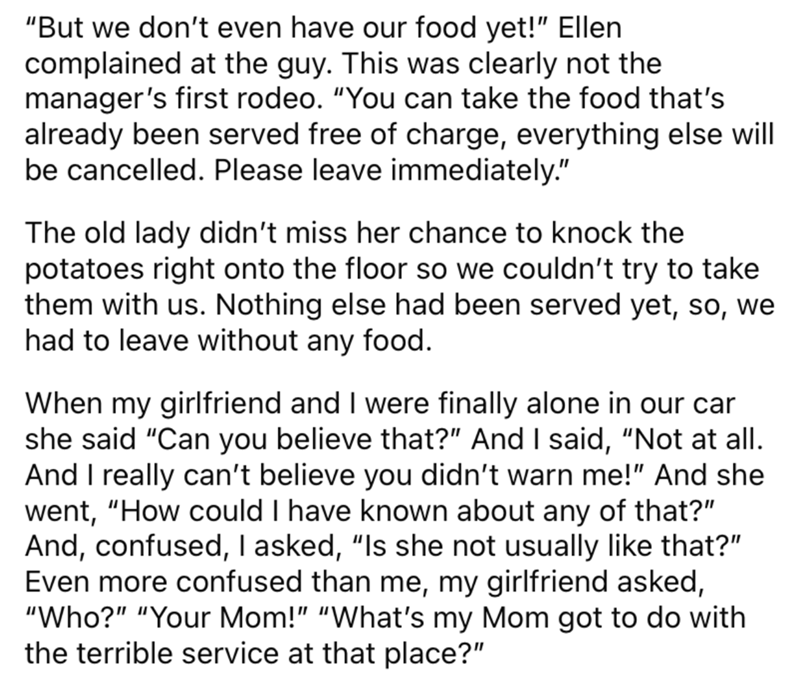 At the end of the day, it turned out to be a good thing since he learned what his girlfriend was really like. 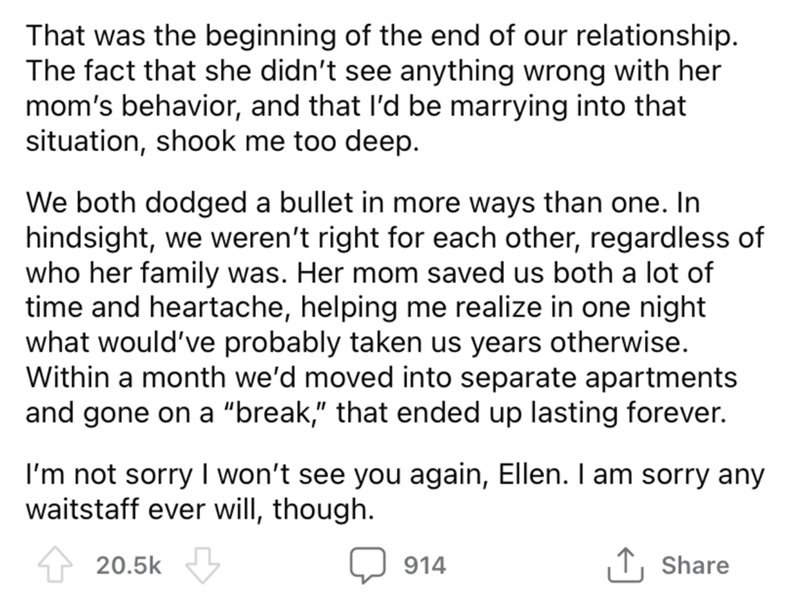 Have you ever had to deal with such a person? If so how would you recommend acting towards them? Comment down below and let us know.