A pool of tears!

Whenever someone rescues or adopts a dog, it is done with so much love and hope. Dogs are known to be very loving and affectionate animals. Their energy fills humans with so many emotions. Whenever someone adopts a dog, they are filled with so much hope to create a new life. They imagine spending the coming days with a new member in the house and shower that pet with love. The affection and admiration people hold inside their hearts comes out in form of cuddles and hugs for that pet. It is so overwhelming when your dear pet passes away due to reasons that are out of our control.

Today we will be telling you a devastating story of two stray dogs, who were adopted by an artist, his girlfriend, and his brother. They all were immediately smitten with both dogs the moment they adopted them. To their dismay, there was not a happy ending to this story. What followed was completely unexpected and unfortunate. They later found out that both puppies were victims of CD-Virus. The artist man was crushed when both the puppies passed away. He used his skills to create something in their remembrance. He created a beautiful and heartfelt illustration, which would fill your eyes with tears.

When the artist rescued the puppies, most dogs in the shelter area had contracted the Canine Distemper Virus. The artist was not even aware that the puppies were dealing with such a deadly Virus. He adopted them being completely clueless of this crucial information. The symptoms had to show eventually to the moment puppies started showing odd symptoms, the artist hurried them to the vet clinic. Unfortunately, it had gotten too late till the time puppies got examined. Many people might not be aware but CVD is a fatal virus. The chances of a dog to service the virus are very low.

The artist added a message with the illustrations he made. He said:

“In Vietnam, we are lacking pet care, animal shelter, and disease control protocols, many sick stray dogs are roaming the streets. We really hope to have better solutions for them, but right now Animal rescue is spontaneous and disorganized. This comic is my prayer for my puppies.”

Get ready to be a mess of tears! 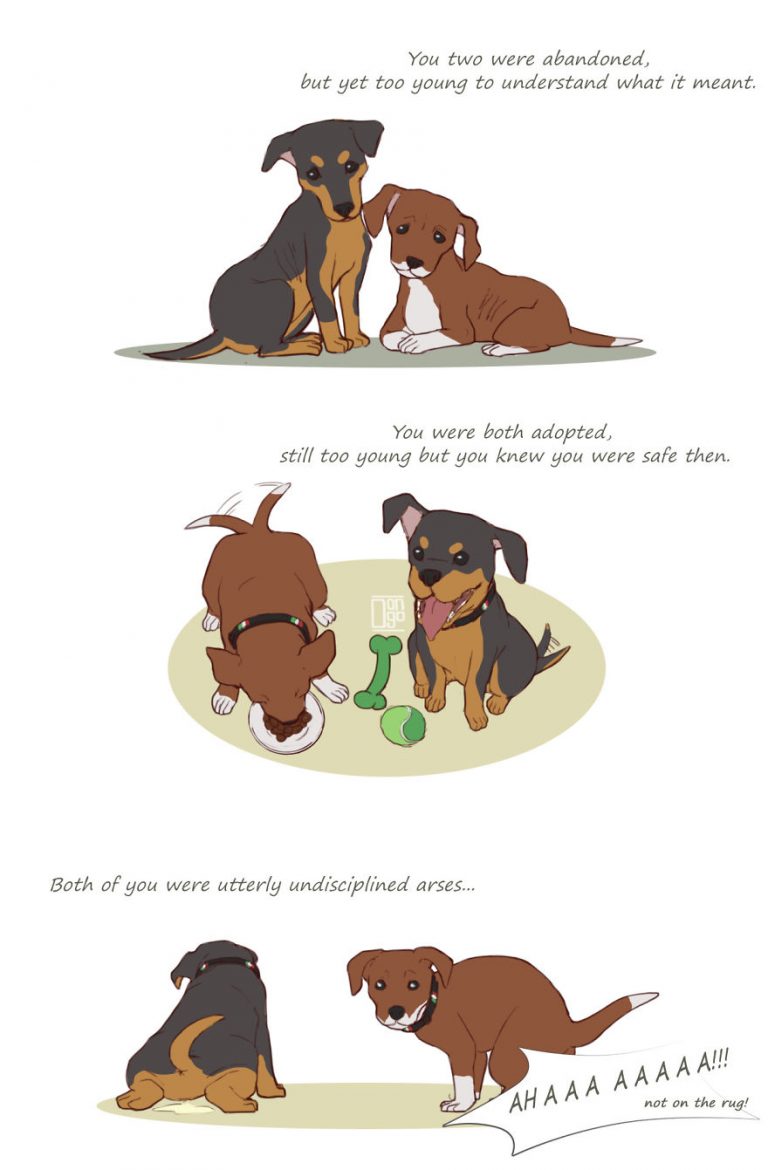 The illustration not only includes images of the dogs, but also a heartfelt monologue by the Artist. The monologue is addressed to the dogs, telling them how the artist felt towards both of them. It revisits the time when they both were rescued from the Animal rescue shelter. The artist talks about how the puppies were so oblivious of what was going around them. They would spend their time playing with each other, in their own little world. 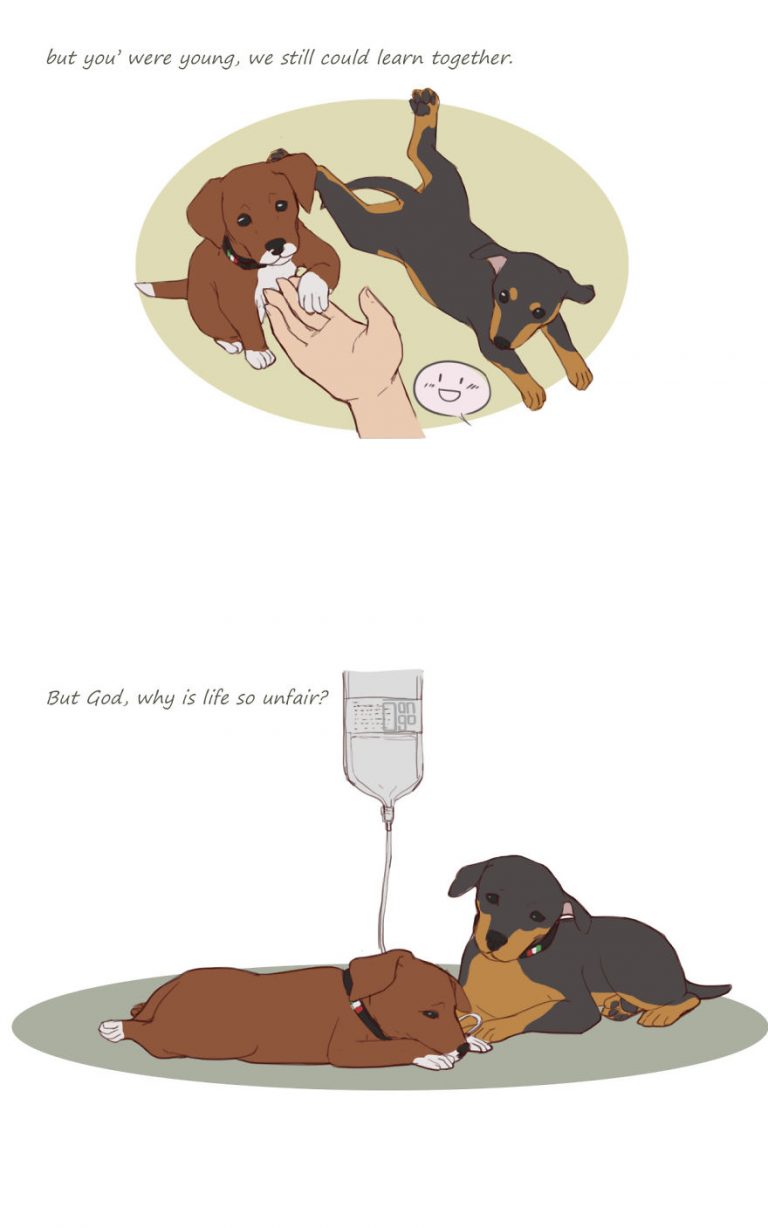 The story then shows the moment when the guy started noticing the symptoms. The guy holding the puppy’s hand is meant to show how he started noticing some unusual behaviour in the puppies. Some common symptoms of CD-virus are lethargy, coughing, fever, loss of appetite, and even vomiting.  When all these symptoms combine, it does not take even a short while to realize that something is wrong. The artist showed the brown dog frowning, which alludes to the deteriorating health of the dog. The other dog had to see his brother sick.

Seeing a drip attached to the dog and the other dog looking at him with sad eyes is making me bawl like a baby.  Life really is unfair. These both had just finally found a home. This universe took away this life from them too soon!

Sadness fills the room with the passing away of a puppy! 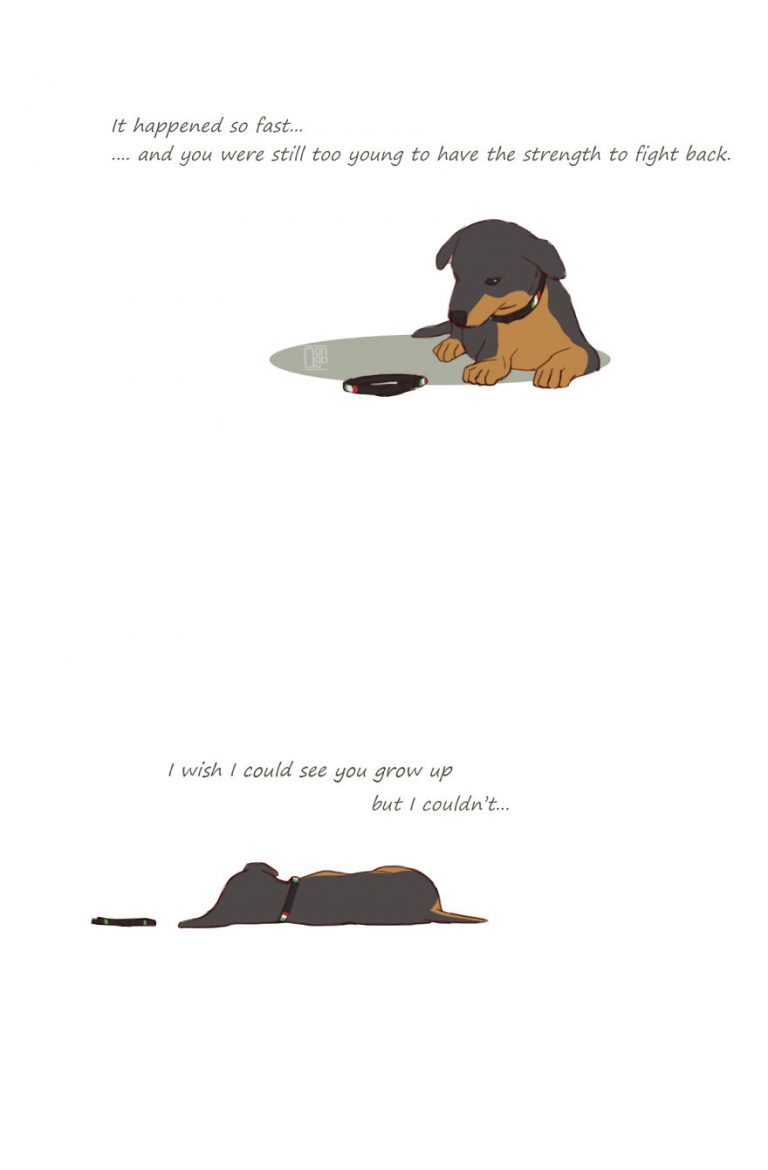 The story then shows the passing away of the brown dog. Given how these two dogs used to spend so much time together and were practically siblings, the other dog must have been filled with utter despair. This universe took away its brother, its companion, and family. The monologue continues showing the emotions artist felt at the time one of the puppies passed away.

Whenever someone adopts an animal, they imagine how they would see the pet grow in front of their own eyes. It is just like how human parents want their child to grow and experience life. 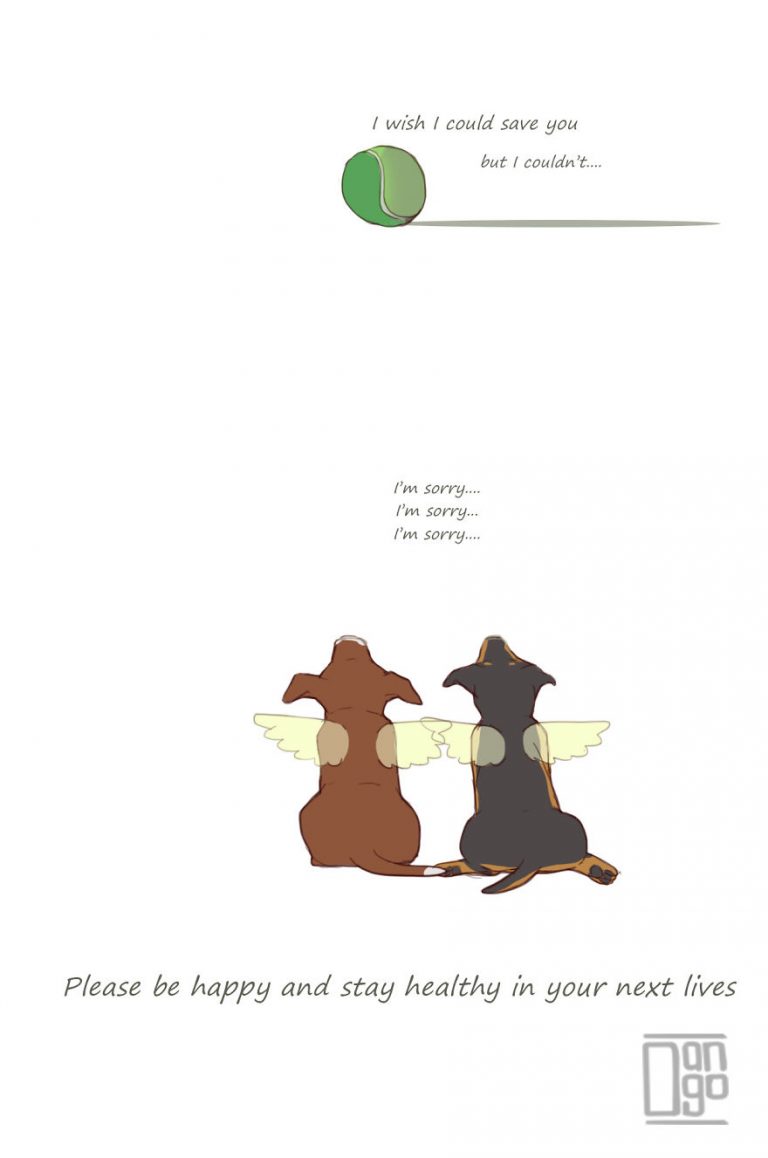 The last part of the illustration is the most heart-shattering one. It shows how both the puppies are now in heaven. The second one did not have much time left either because he had also contracted the virus. He also had to leave at some point. Both the puppies were like angels who came into the artist’s life and filled his life with happiness for a moment but eventually had to leave.

The ending also shows the guilt and sorrow that prevails when your beloved pet passes away. And in this case, the artist lost not one, but two dear puppies. He did not even get to spend much time with them and fill their lives with happiness. When a pet dies, it leaves you with the guilt that you could not save and protect their baby or perhaps you didn’t do your best. Even if the circumstances were out of hand, a person keeps wondering if there is something that could have been done that would have helped that pet and save it from its unfortunate fate.

Many people may not realize it, but we never considered our pets anything less than our own children. A pet owner takes on the responsibility of an animal and considers it as their own. The person starts imagining how every day would be spent waking up to feed them, shower them and even clean their litter. The pet would need toys to stay entertained so a pet owner buys a lot of toys before the pet even arrives home. The person knows what they are getting into and fully commit to it.

It looks like the artist utilized all his emotions and channelled them into this beautiful illustration. He did not know how to express the deep sorrow and feelings of pain they are in, so he used his skills to write a heartfelt note for the lost puppies.

Share this with your fellow dog lovers and let us know in the comments how this story made you feel! Let’s share our common love for pets with each other.