On the contrary, animals are similar to humans in their early years. Just like human babies, animals at younger ages too are very adaptive and eager to make new friends, even if they belong to a different species. They have the ability to bond with anyone they meet early on. That bond springs up to be special and stronger with time.

Just like this, today we have a story about a young monkey and a cub. They create a special friendship as they spend time together and we see a delightful moment of them playing together joyfully. For all animal loves, here’s your daily dose of cuteness!

Whenever they are paired together, it is observed how much fun they tend to have. They connect very well and push past the differences they hold.

Digging into their background a bit, Ban Jin is a four-month-old macaque and the tiger cub is three months old, called September. They both live at the Hengshui Wildlife park located in Northern China’s Hebei province. They were born around the same time, just a few weeks apart. They have been around each other since the days they were born and have grown up together. Their close proximity has brought them together and formed a special connection. They’re practically siblings.

And of course, in a friendship of two, each is the polar opposite of the other. Similar is the case of September and Ban Jin. Ban Jin behaves naughty around playtime and jumps on his friend September’s back for a piggyback ride. Ban Jin’s favorite thing to do when spending time with his friends is riding on September’s back. Seeing how much he enjoys this, if it was in his power, he would probably do it the whole day!

To our luck, these moments were caught on camera and showed us some cherishable times they both shared this day. It never gets old for the Zoo’s staff, so they ended up making a video of them playing. And given how undeniably cute they are, the video instantly went viral and gained a lot of views. Cute moments between two beings is something people adore a lot, but when people see something like between two animals they could never imagine together, they went over the moon!

The baby tiger is not as naughty as his dear friend Ban Jin. Instead, he adds to the purity of the relationship and happily agrees to give his friend a ride whenever he asks for it. He never gets exhausted or even annoyed at the slightest. September is the most patient friend any monkey could ever have. 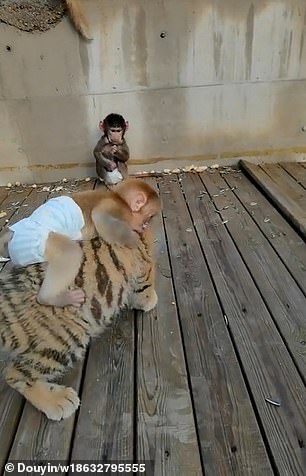 Early on, Ban Jin was hesitant about September because of how much bigger he was. But with time, September proved with his warmth and friendly nature that even if he is bigger than Ban Jin, he still can be a very good friend. Eventually, they were seen enjoying every time they were together.

It is moving to know that if these two can form such a beautiful bond, ignoring all the obvious and overwhelming differences they hold, anyone else can do it too. Now we can only hope that these two continue to share their friendship and never grow apart. It would break our hearts if they do.

Check the video of September and Ban Jin playing together that went viral!