The uniqueness of this cat will make you Awe without noticing.

What do you guys think is the best way to describe the factor of uniqueness? Like how would you tell yourselves a certain thing felt unique to you? The answer is right in the question. You “felt” the uniqueness which means it is a feeling or a sensation caused by something or someone that you weren’t aware of before. A realization of something new and something of a kind that sort of enhances your emotions about it, in both good or bad direction. So yeah, uniqueness is something new, unlike anything and you could dislike it, there are no clauses that say uniqueness is always to be supported in a positive way.

But this unique cat, I am damn sure, you will all greet with the welcome-iest (yeah I invented that word) of hearts because this unique and adorable Japanese cat, Bell,  that I am talking about has an extremely fluffy squirrel-like tail.

Bell resides in Japan, as I said earlier, is a female Napoleon breed and is a very majestical cat. Like you wouldn’t need her to have that special “unique” factor” to fall in love with her, this cat is extremely adorable and it is very hard to take your eyes off of. But that unique factor increases the adorable factor ten folds and the factor is that this floor has a very fluffy squirrel-like tail.

Meet the cutie herself, Bell! Just look at those eyes, absolutely worth dying for. 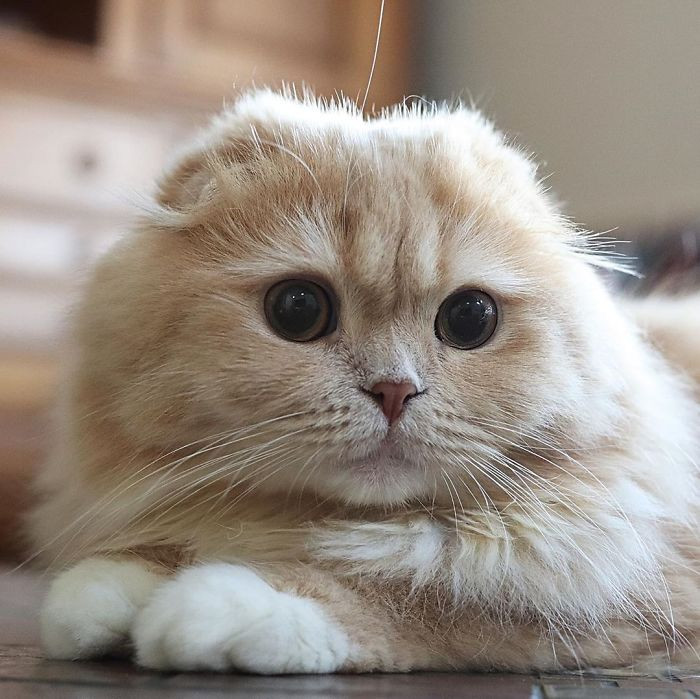 Now if you guys know cats well, you would know that a Napolean is a mix between Munchkins and Persian Cats, Munchkins look very perfectly shaped to me, almost as animated, and Persians, as you all may know, are one of the floofiest cats out there.

But in Bell’s lucky case, she got double the fur all of which accumulated right on her tail making it look like it’s a squirrel’s tail.

I love genes and thank you to this locus for generated one of the cutest cats I have ever seen. 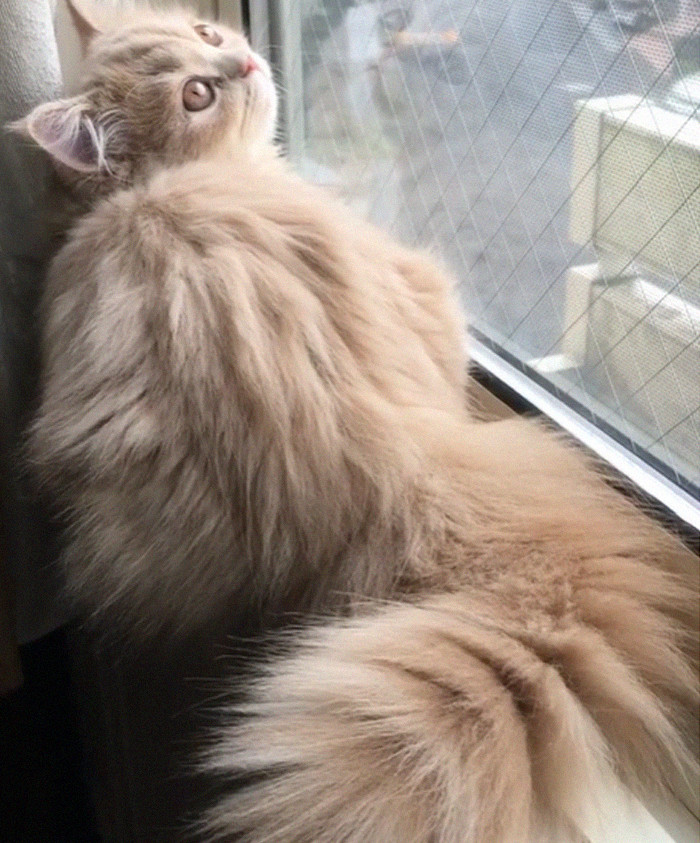 Weren’t the squirrels already too adorable that cat had to jump in, get a tail that looks like a squirrel’s tail and make the whole thing even cuter? It looks extremely adorable.

She could hide so many socks in there and nobody would know! 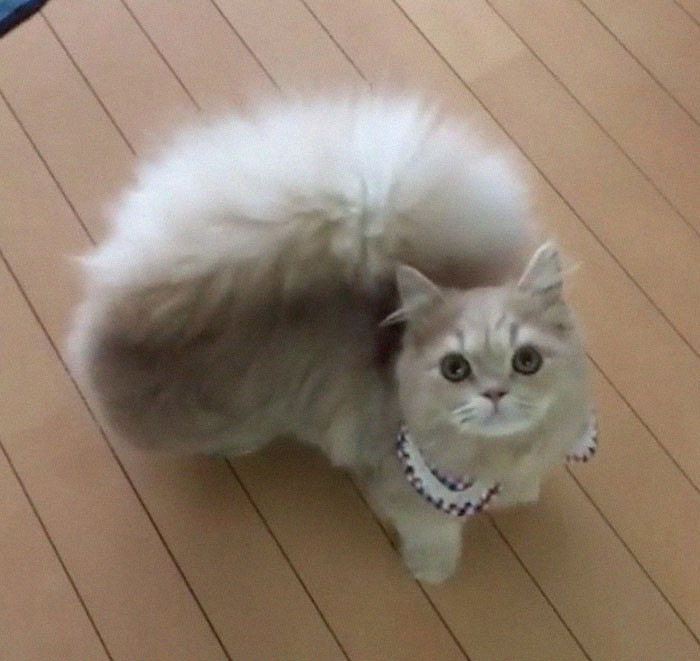 The amount of fur that she has on her tail makes it look like half of her body is just her tail. Why am I laughing so much? It’s a cute laugh because I absolutely love this cat. 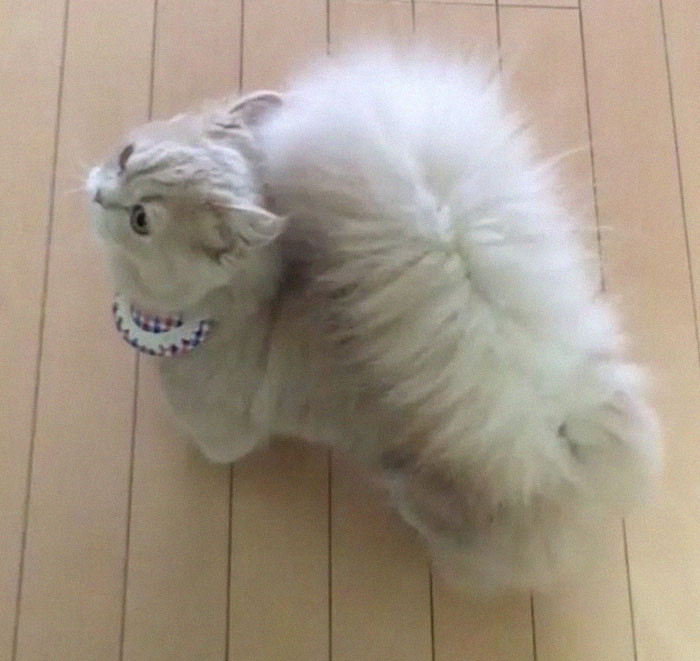 Uh oh! Who messed up the queen’s mood? But can you really take that “anger” seriously? Given that tail…, not me. 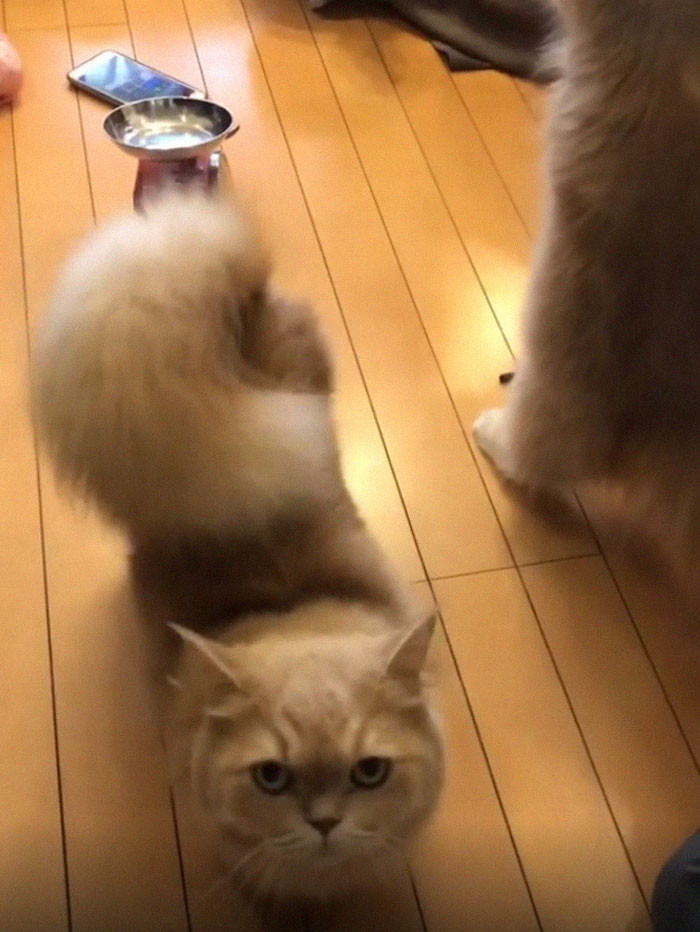 When the food is so tasty that you quickly finish it and are now mad at mom and dad for not giving you enough.

Would you imagine the comfort level one could attain after hugging this floof?

There is no going back once this kitty is in your arms. 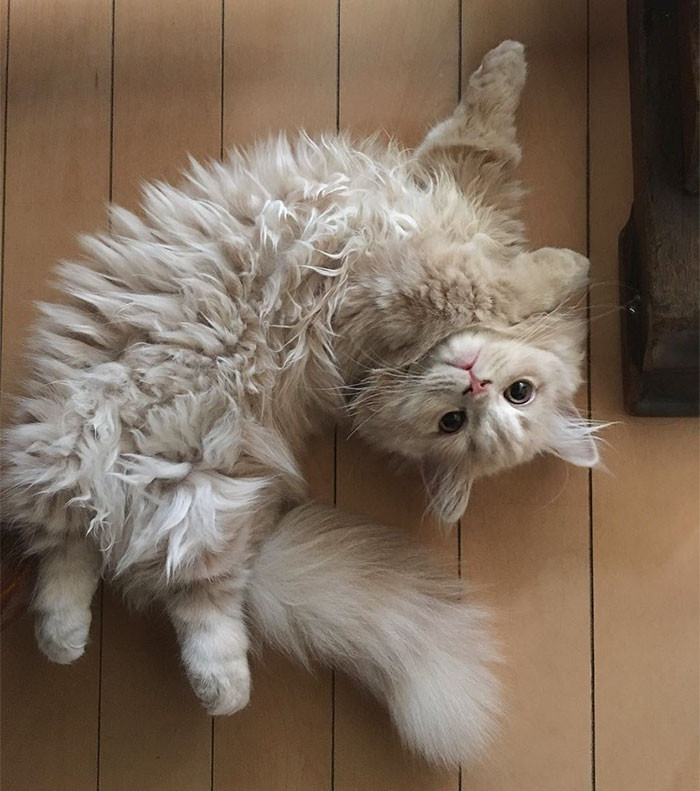 I want her to adopt me. Like right now. 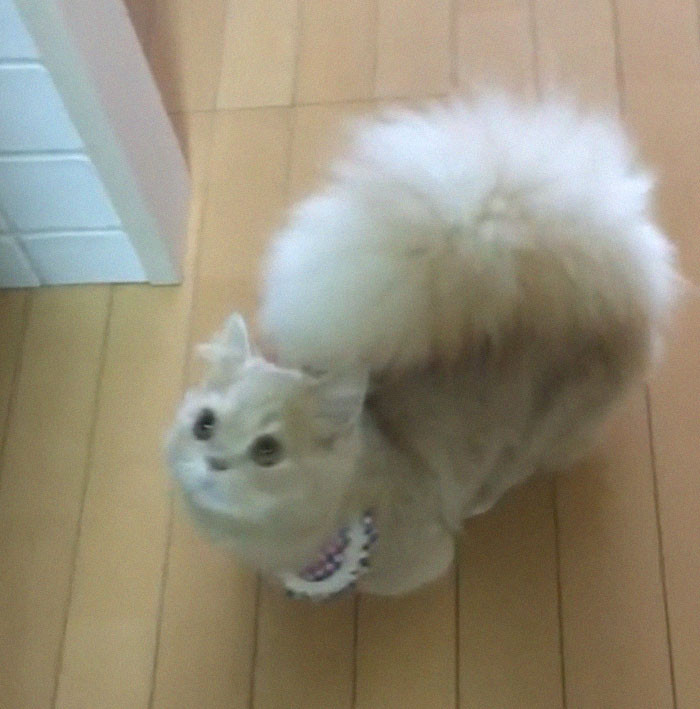 “Guys! Managing this floofy tail isn’t a piece of cake. Look, I can’t even fill the whole thing in my favorite box.” 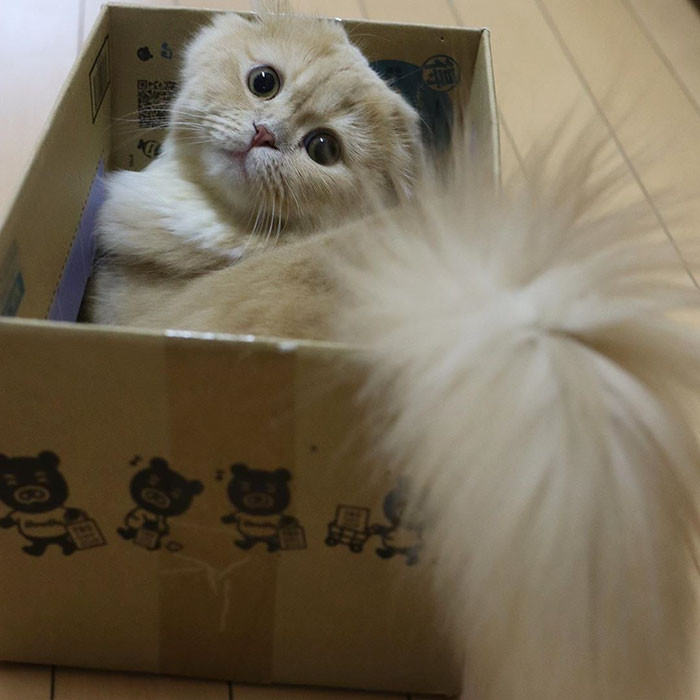 Bell is not all cuteness and that. She is actually a very energetic cat who loves showcasing her emotions. 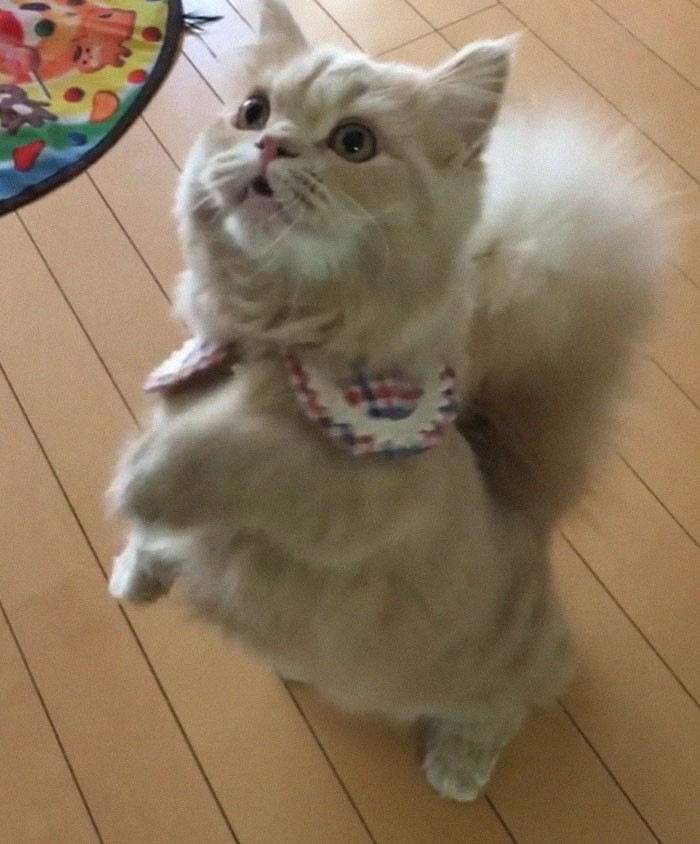 I am jealous of her owners!

When people say ass “hat” instead of “hole”, I think this is what they visualize in their head. 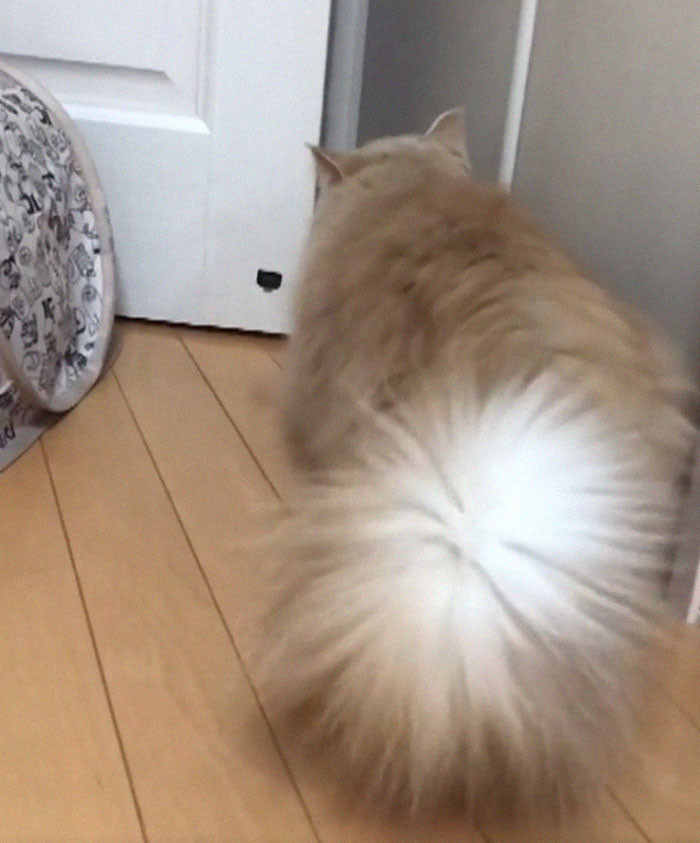 Here is how the internet reacted to this extremely gorgeous squirrel-tailed floof!

1. Right behind you on that one, Diane!

3. Wouldn’t have described it better myself, mate! By the way, she’d rule vogue, that’s for sure!

4. The Fur-Baby received a lot of love.

I am so glad I came across Bell, she is absolutely perfect in her own way and that tail, I guess it is safe to say, won everyone’s hearts.

I really hope you guys enjoyed it. Feel free to share your thoughts about this squirrel-tailed cat and for Bell, honey I wish you all the best in your happy life.