A lot of people seem to be obsessed with serial killers.

Even though the topic is pretty gruesome and scary, a lot of people seem to enjoy it, myself included. Maybe it is because of the mysterious nature of these stories that leave us normal people curious. We want to know why the serial killers did what they did, what went on in their heads, what mistakes they made to get caught, and sometimes, how clever they were to not get caught. The topic surely is interesting even if it is not all rainbows and butterflies. Sure, it is not everyone’s cup of tea but we can all agree that the stories of these killers can make up for good documentaries and movies. A lot of people go overboard with their obsession with serial killers, though. There were cases of some murderers that were inspired by serial killers, but that isn’t a very usual case. Some people are obsessed but to a safe limit.

They like decorating their houses and buying accessories that are serial killer related. Again, I know it is not everyone’s cup of tea, but it can seem pretty cool if you do it the right way.

The Black Monarch Hotel seems to be doing it the right way.

It is situated in Victor, Colorado, USA. The hotel used to be a brothel at one point in time, but it is now an exquisite destination for tourists. Their website states that it is much more than just a hotel.

“If these walls could talk, they’d whisper the town’s lore of hauntings, a Wild West history of barkeep gunfights, a phoenix-like revision after a great fire in 1899 and even some history with Nicola Tesla. In modern times, The Black Monarch has been the beautiful backdrop of countless modern indie films and photo shoots.” 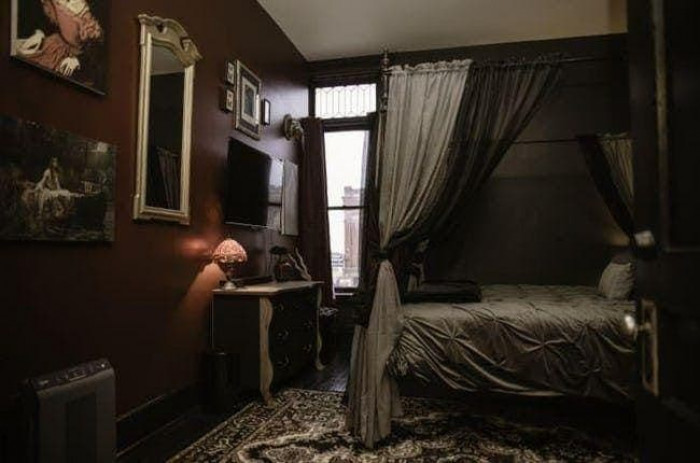 The hotel was deserted in a terrible condition before contractor Adam Zimmerli bought it in June 2019. After remodelling and making the whole hotel’s theme different, it has become quite popular.

The hotel contains a room dedicated to Countess Elizabeth Báthory.

If you haven’t heard of the story already, in the 16th and 17th centuries, the Hungarian Countess Elizabeth Bathory is suspected to have killed almost a hundred women. She murdered them to obtain their blood so that she could bathe in them. She believed that the blood of women would keep her young and beautiful. She has a room dedicated solely to her in the hotel.

It has blood-red walls, black curtains around the bed, a taxidermy bat, and a portrait of the Countess. 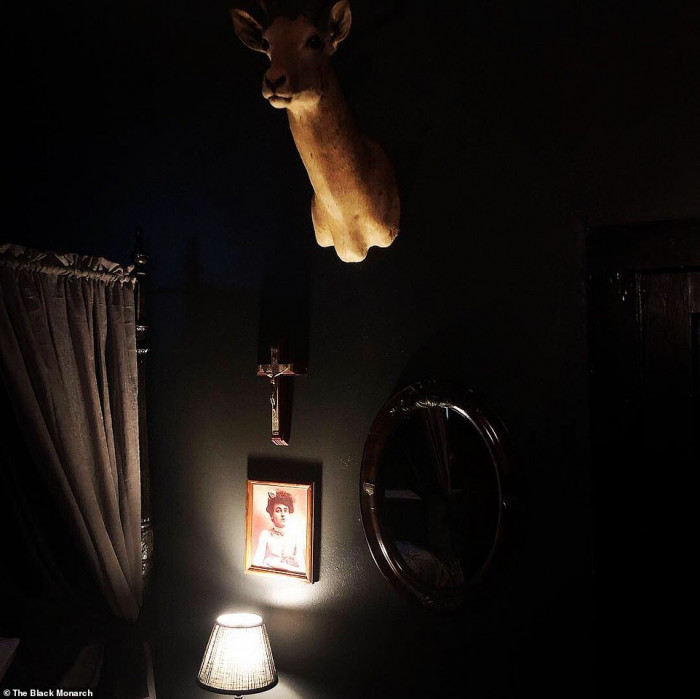 The hotel has quite a history.

Like I mentioned before that it used to be a brothel, it also used to be a casino and a wild west saloon. It was destroyed when a terrible fire burned down the city, including the hotel back in 1899. 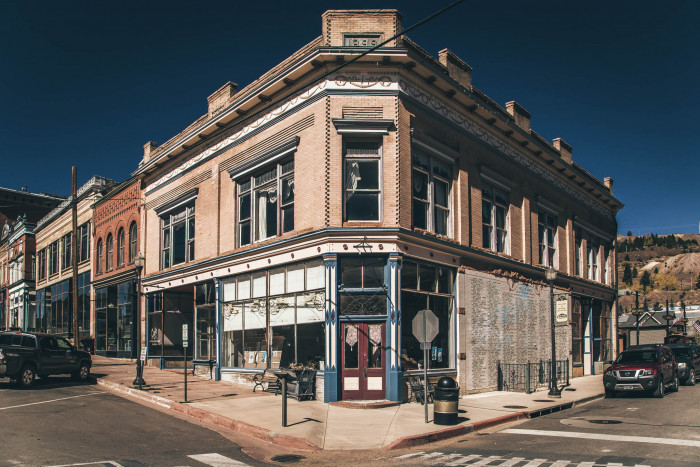 It is said that Nikola Tesla used to live near Victor, Colorado around that time and he was the one that did the wiring for the building.

Even though there is not a lot of solid proof to back that statement, there is a room in the hotel that is dedicated to Tesla as well. 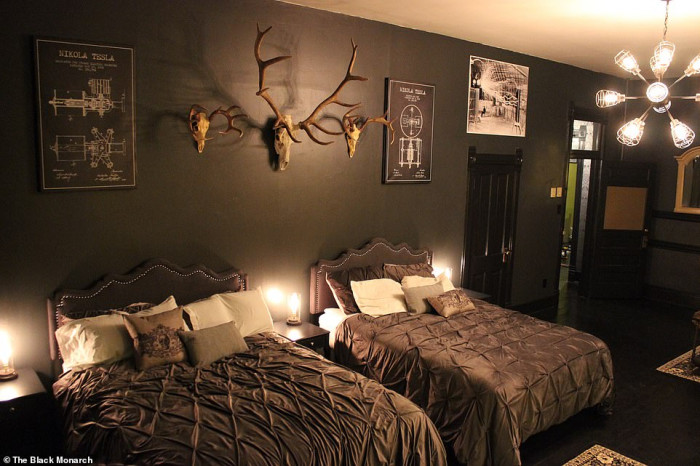 They also say the hotel is haunted by the spirit of a miner who died in the tragic fire back in 1899. 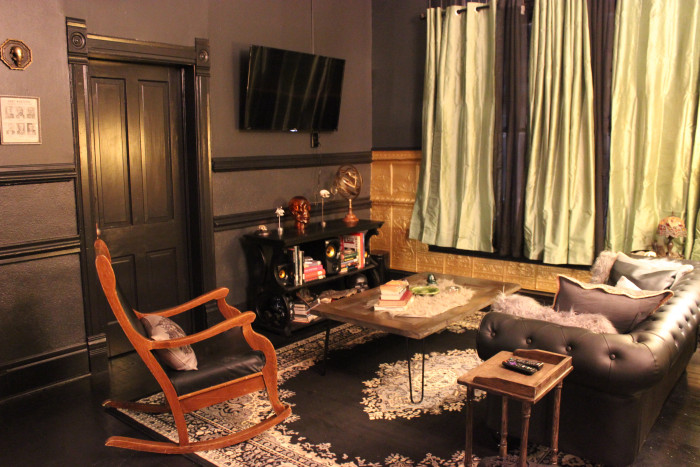 There is also another room that goes by The Black Annis’ theme.

The Black Annis was also known as the bogeywoman of Leicester and was known to eat children. Quite a scary theme to go by, I must say. 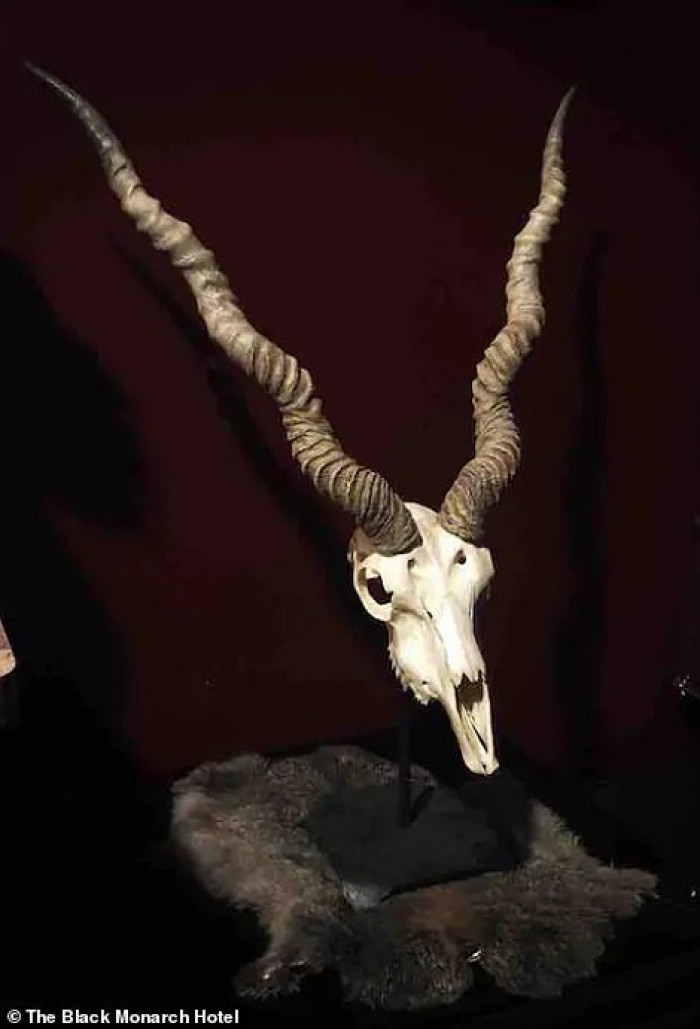 The hotel is known for being haunted.

Even though it has not had a lot of guests since the hotel’s opening in the summer of 2019, the few guests that have stayed there have reported creepy incidents happening in the building. Despite being alone, the guests would hear men arguing and women laughing in the middle of the night. There was also a reported sighting of a woman’s ghostly figure on top of the staircase. 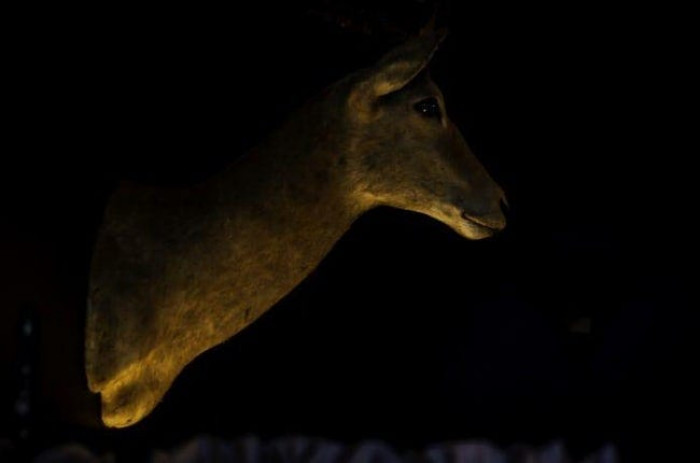 There is also an H.H. Holmes themed room in the hotel.

H.H. Holmes is rumoured to have murdered around 200 people. Even though the killer himself confessed to murdering 27-130 people, only nine of these cases were confirmed.

The H.H. Holmes room in the hotel is quite similar to his actual home since it follows the original blueprints of the house. H.H. Holmes designed his house himself and had soundproof walls so that nobody could hear the screams of his victims. The hotel room is decorated with pictures of Holmes, medical drawings and a lot of creepy antique decoration pieces. 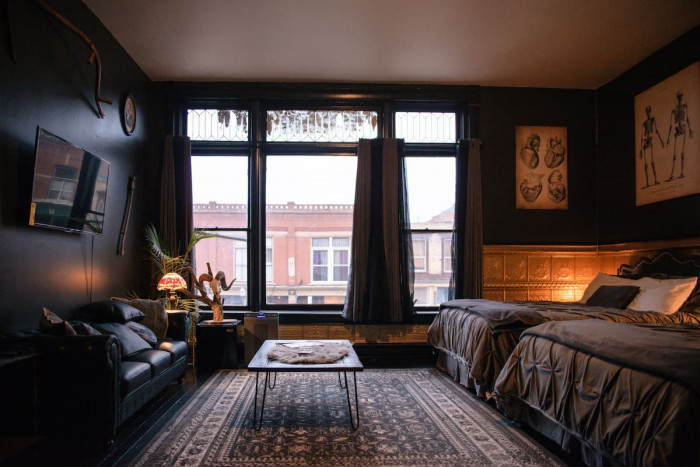 All four rooms were carefully designed by Zimmerli.

It took him years to make the perfect design and get the right decorations for the rooms. 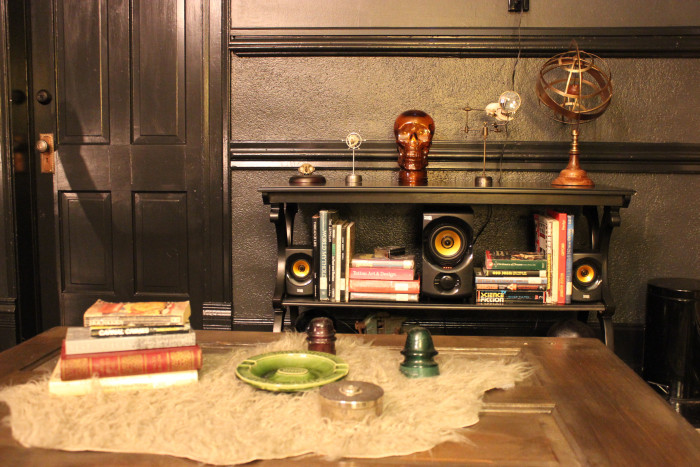 Regardless of every room’s era, all rooms are victorian themed. This is why Zimmerli kept the original woodwork of the building. 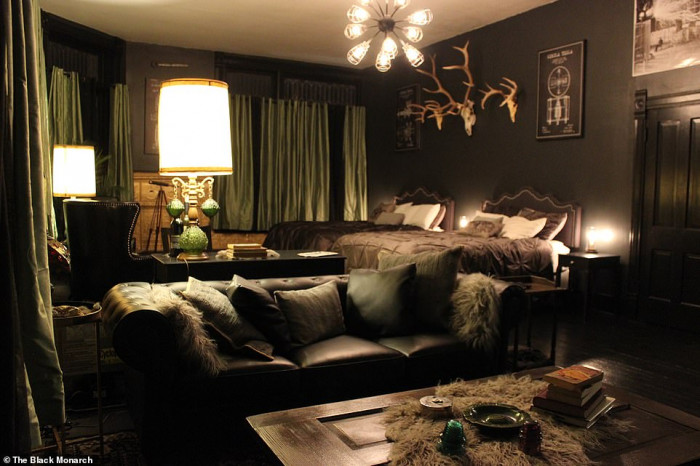 The building still has its original bay windows, hardwood floors, and oak doors.

The ceilings are made of tin and all the walls are black, except for the Countess’ room. The bedding is entirely black and the curtains are dark green, which makes the victorian aesthetic complete. 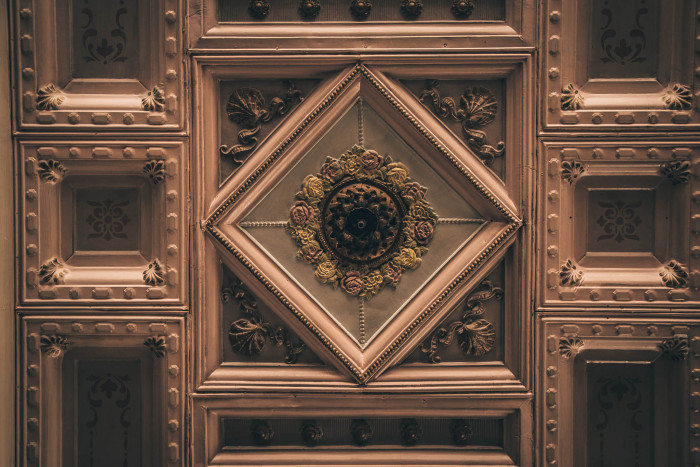 The Black Monarch Hotel has a lot coming up.

They are planning to hold destination weddings, burlesque shows, and add some rooms that are macabre character themed. 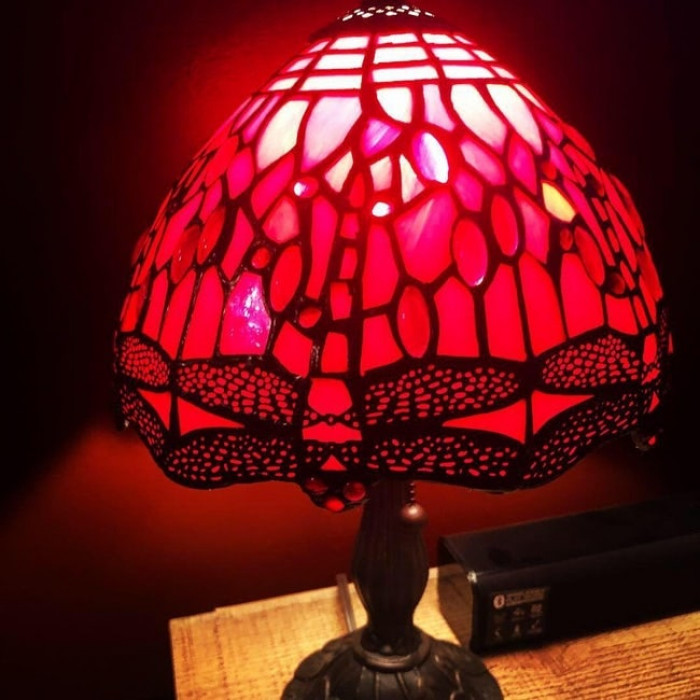 The whole town of Victor, Colorado is filled to the brim with haunted stories and tales.

The Victor Hotel used to store the bodies of dead miners temporarily. The guests that have stayed in the hotel report sightings of ghost doctors, miners, and missing limbs just walking down the fourth-floor hallway. The fourth floor is where they used to store the dead bodies. 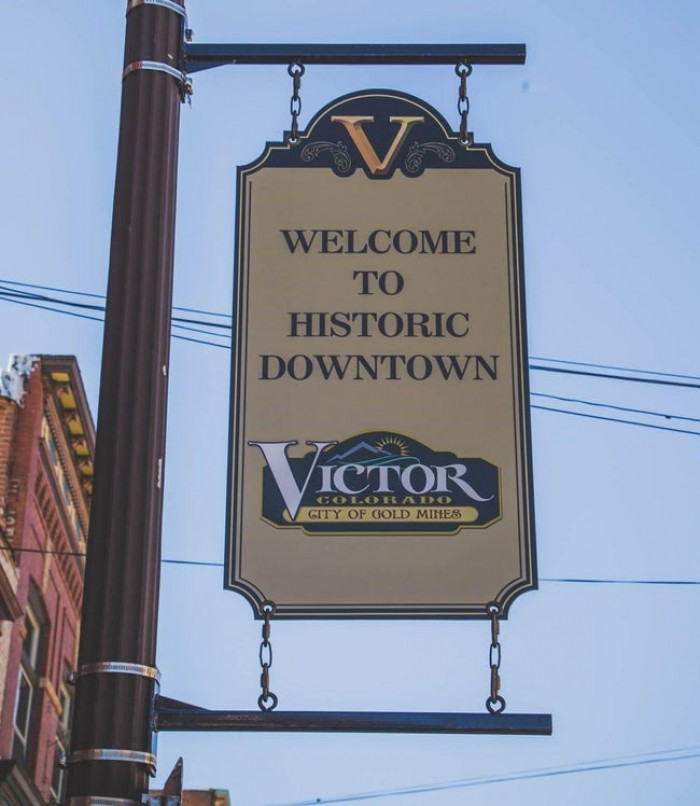 The Colorado Grande Casino in Cripple Creek is said to be haunted too.

“The Colorado Grande Casino and Hotel is believed to be haunted by a ghost called Maggie, a rose-scented Irish woman in turn-of-the-century clothes,” a few sources say. There is also another ghost that is rumoured to haunt the casino. Her name is Lily and she plays with purple balloons that guests leave for her. 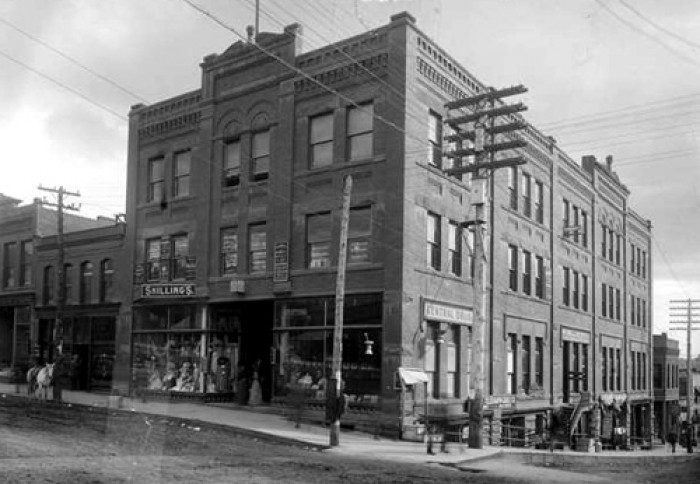 And then we have the Imperial Hotel And Restaurant.

There is a ghost that is known for being stuck in an endless loop of falling down the stairs in the building. 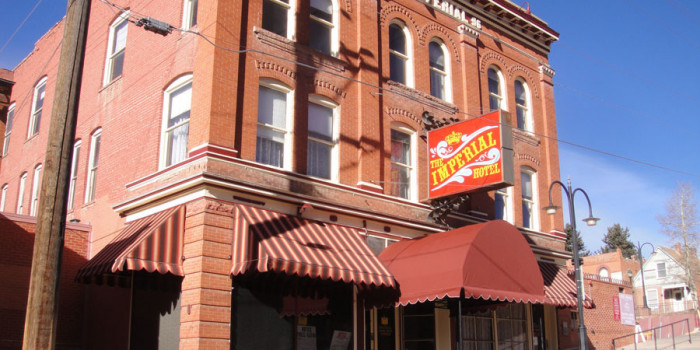 Would you like to visit this place? Do you believe it is actually haunted? Share your thoughts with us in the comments below.