The idea of living with roommates and sharing you belongings seems so magical when you haven’t actually experienced it in reality. They say all that glitters is not gold. Well, they are probably right. A lot of us think it’s great to share your living space with a roommate, this way we get to split all the bills and have great fun. Unfortunately, It is usually the complete opposite of that. We’re not saying that every roommate is the same, there are people who are actually well organized and well mannered. However, some roommates are a special case and it is better to get rid of them as soon as possible.

We came across an interesting Reddit story that was recently posted in a subreddit called pretty revenge. It was all about getting rid of roommates who were extremely unorganized and messed up on so may levels. It was getting physically impossible to live with them, as they were throwing childish tantrums. Things were getting unbearable for the OP and his girlfriend. They were already putting up with a lot of things that were coming from their roommates. On top of everything, all that was in the apartment belonged to the OP so he and his girlfriend decided to take a sweet revenge from their roommates. Scroll down to read the whole story.

Couple shares a rented house with another couple. 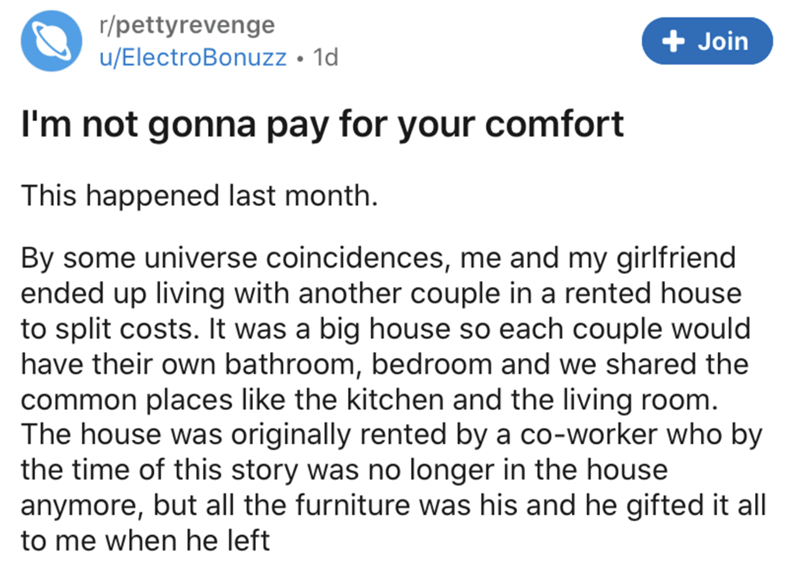 So the roommates had bad habits. 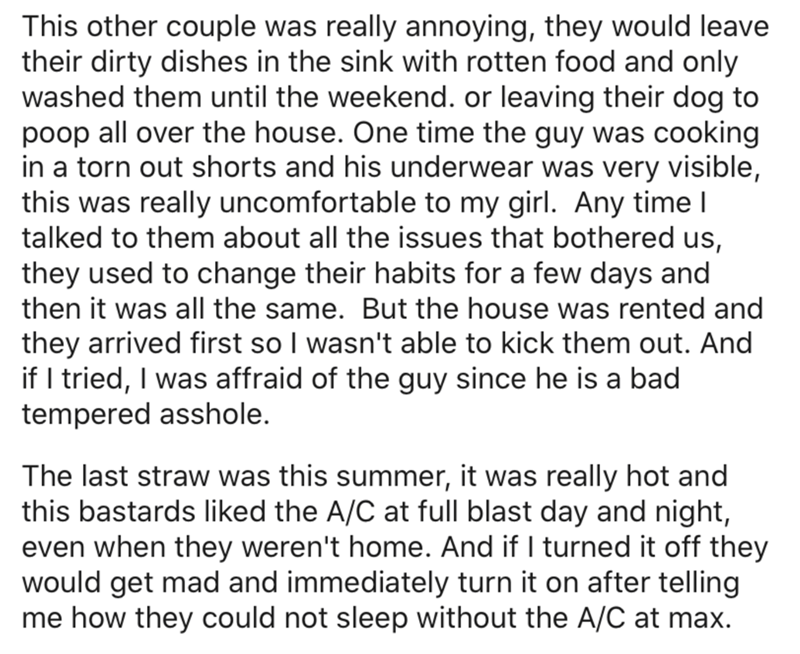 Living with a messed up person who has no regards of other people’s comfort and liking is a true pain in the a*s. After all, home is a person’s territory and everyone wishes to have a living space that is well organized and clean. If by any chance an organized and well mannered person gets to have a messy roommate, life becomes extremely difficult for them. No one can live with someone who is all messed up and makes others living with him/her uncomfortable. 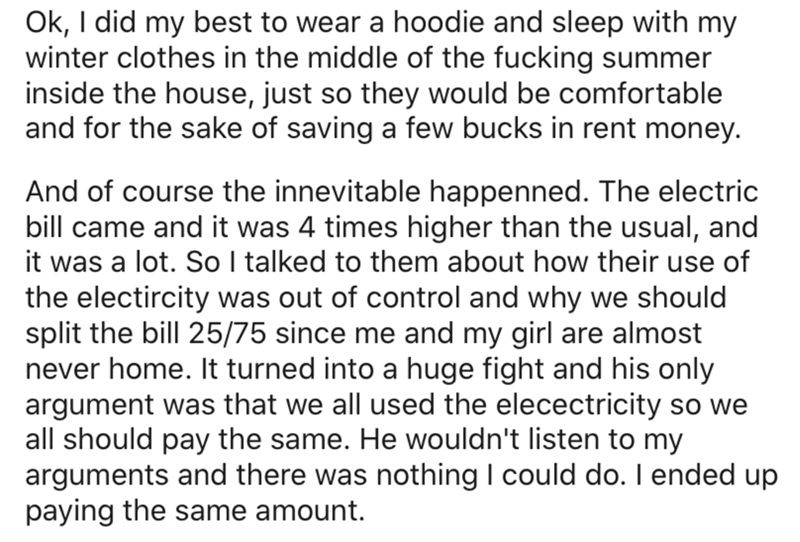 That’s all kinds of unfair. Firstly, the OP had to wear winter clothes in summer and secondly pay for the electricity that he and his girlfriend didn’t even wish to use. That is a complete a*shole move on the roommate’s end. At least have some nerve and split the bill 25/75. The OP had already put up with a lot of his roommate’s sh*t.

Things were getting out of hands now. 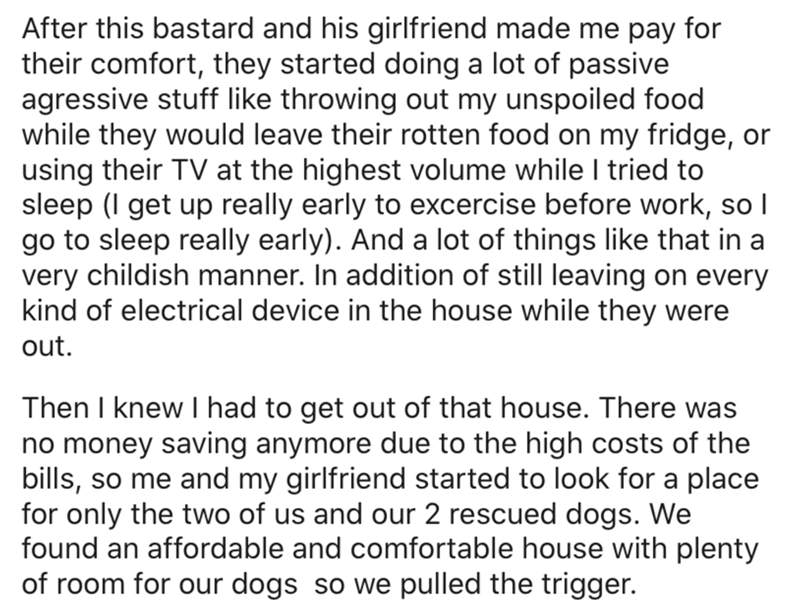 It’s time to move out and on. 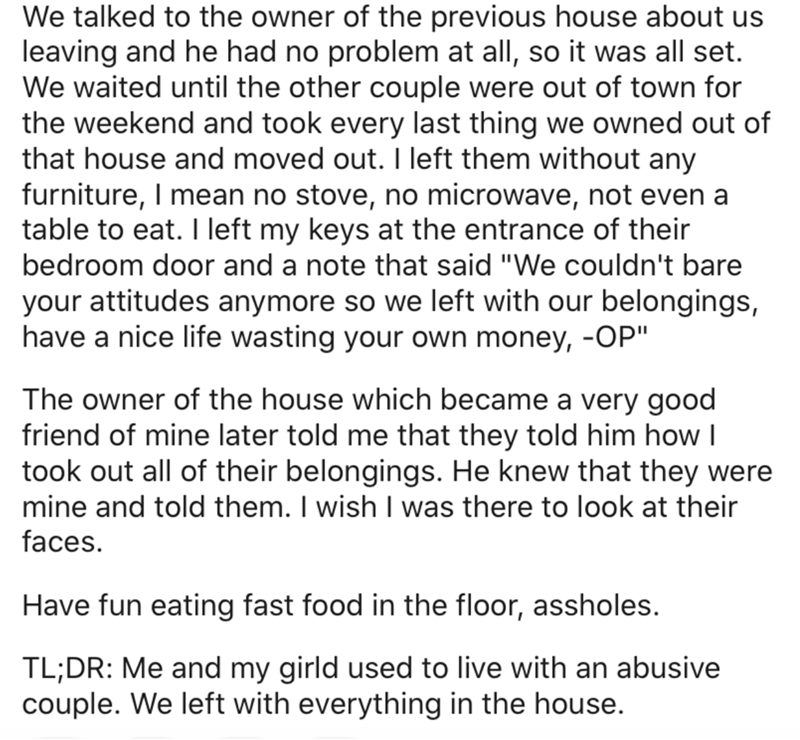 That’s just like getting out of a toxic relationship. You wait for the right time and pack your bags and leave. There are no regrets or any hard feelings. Only freedom and positive vibes. We’re glad that OP moved out of his previous shared apartment into a new home where he can live a peaceful life with his girl and their dogs. Wishing OP a happy life.

We found this story to be extremely inspiring. What do you guys think? Let us know in the comments below.