It is time for your daily dose of cat treats.

Cats have been a prime source of entertainment for humans for a lot of years now. According to scientists, pawprints have been imprinted on this planet for over 12,000 years. Many cultures praised cats as kings and queens while others considered them omens of death. It has been a mixed view throughout history. But what about the cats’ view? They are only here to chill and rule. Not sure if they will get to rule Earth given their tiny floofy appearance that just can’t e taken seriously, but they definitely rule our hearts.

Cats are pretty joyous and are very energetic. Yes, that energy can sometimes cost you a lot. They would “accidentally” smash your $5000 television and won’t show a single sign of the same. Why should one be ashamed of an accident, right? But cat owners fully realize that and take upon the responsibility that a cat’s spoiled ass can be pretty expensive and that connection is what creates some of the funniest cat moments for us to have a really good laugh at.

Today we’ve got some cat snaps that are equal parts hilarious and ridiculous. Cats are very well known for being their lazy asses who would sleep anywhere they wish to, but they can be whacky at times and that wackiness is what we all live for.

Scroll down below for some hilarious yet exciting cat snaps to energize you for the coming week!

1. When it’s your 500th picture of the day and you can’t be arsed anymore! 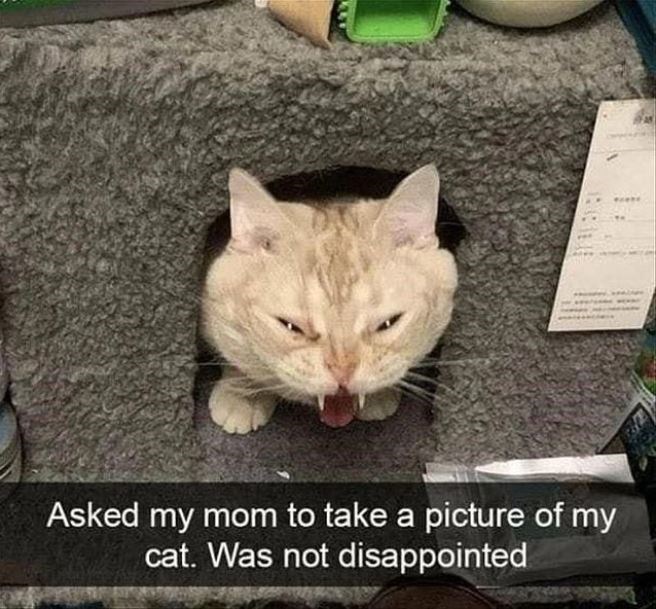 The more important fact is, the cat is not even trying and is still looking the cutest. I need to know the secret. 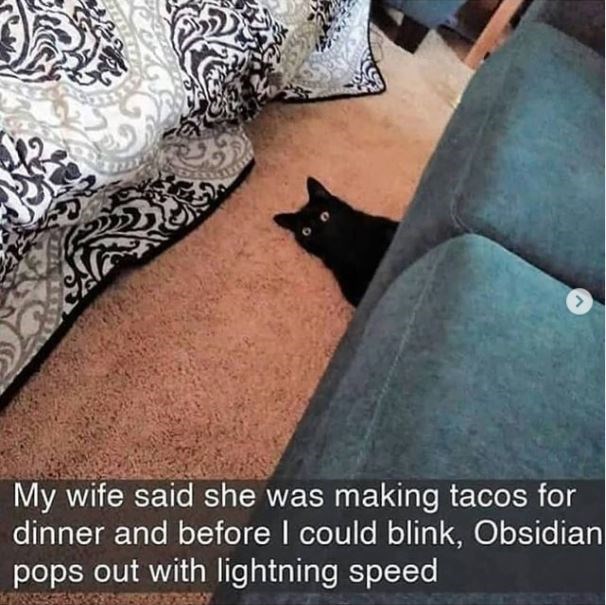 I have started to believe that cats and humans are from one family. Don’t you do the same thing when you hear “Pizza’s here!” or “Dinner’s ready!” I sprint faster than the speed of light. Food ain’t no joke. We support you Obsidian, this is how alert we should be for the matter of food. 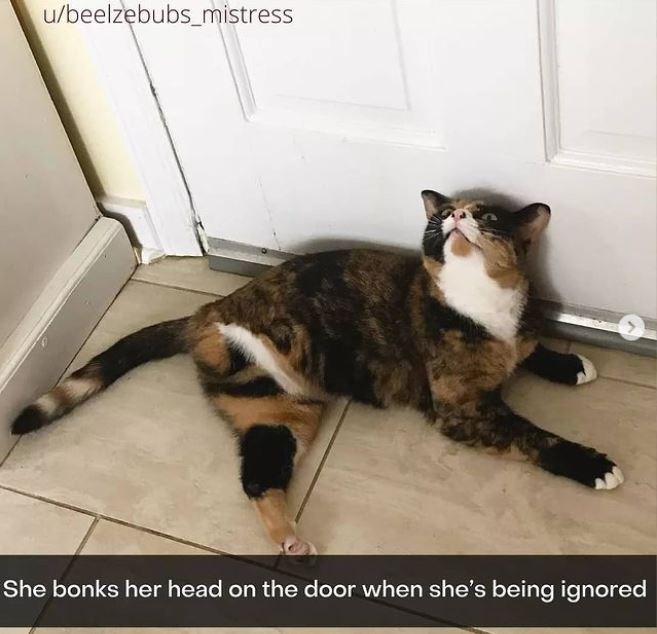 Cats consider themselves are rulers, just like kings and queens. And you know when a ruler doesn’t get your 100% attention, what would happen. I don’t think I could have explained it any better. Cats cannot resist ignorance and this one right here has her own cute way to protest

4. It’s really not that hard, kitty. You just need to aim right. 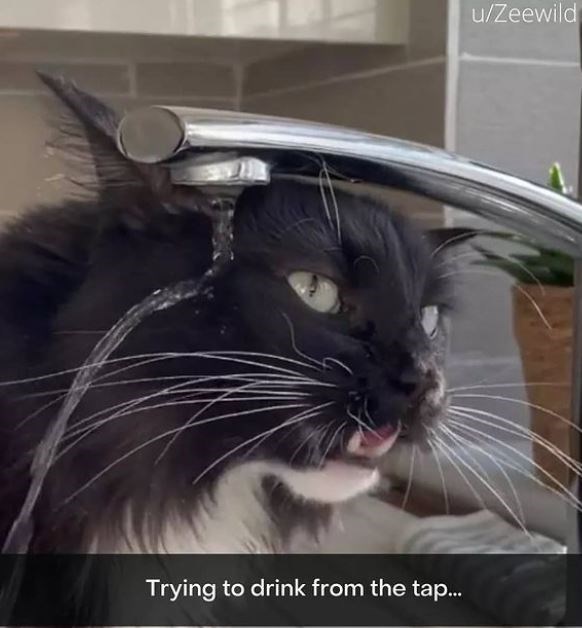 This is the type of stuff that makes me love cats so deeply. I mean there is no intention behind this hilarious moment. Absolutely natural dumbness! Don’t worry baby, just start over and you will get there, eventually. 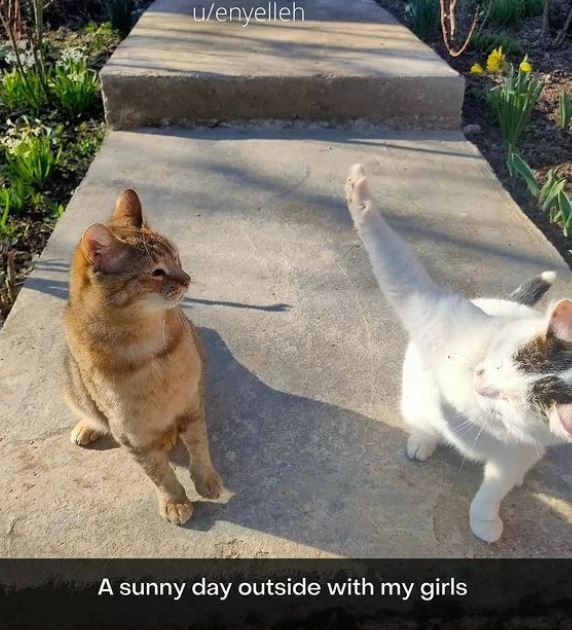 Cats love being outdoors. You could leave them outdoor for days and they won’t exhaust. Joy over health, all day every day. 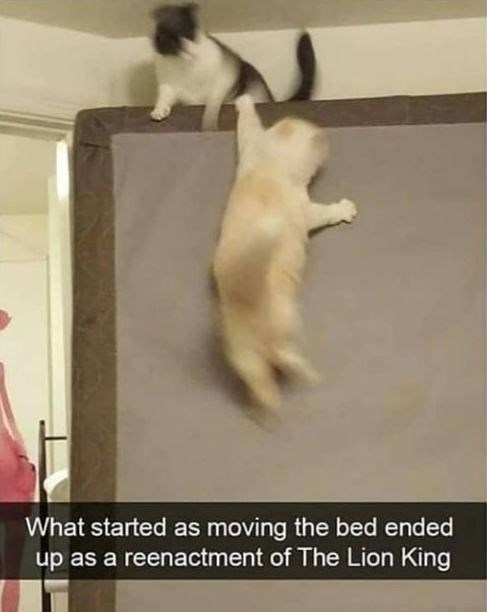 7. Aww kitty looks so cute and at peace! 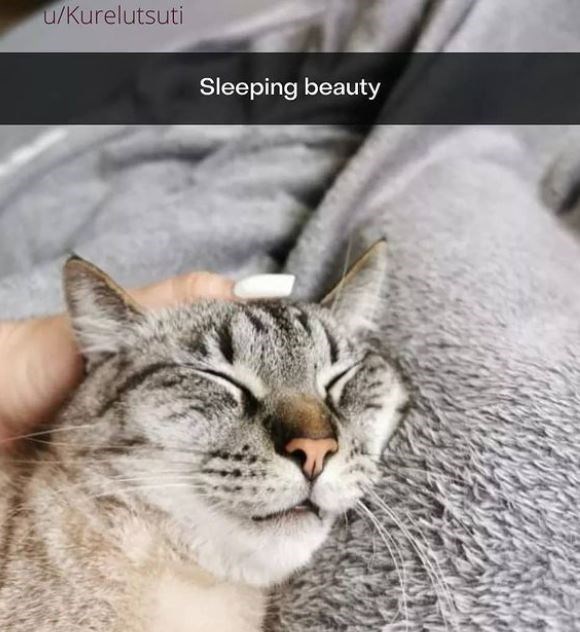 There is nothing cuter than a cat sleeping comfortably.

8. You think? He fully wants those belly rubs. 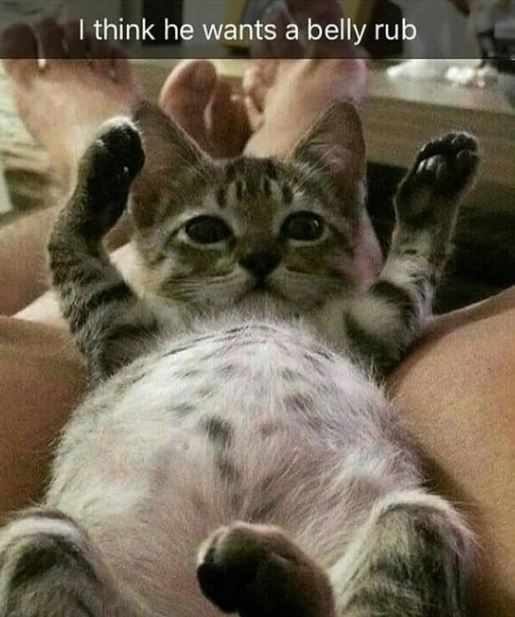 One must never deny a cat of belly rubs. Especially when they themselves are asking for the rubs. Off-topic but doesn’t it look like Kitty is a member of D-X from WWE and is about to hit a cross chop.

9. They find the most joy in things we consider absolutely dumb. 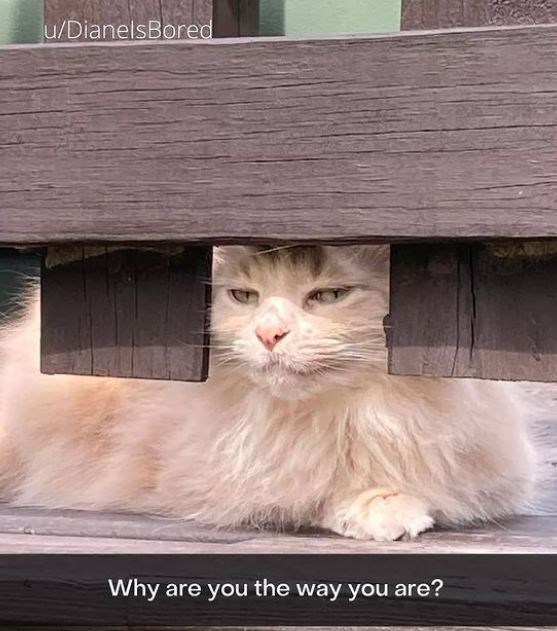 That’s cat’s for you, ladies and gentlemen.

Cat doses are so damn necessary to keep the head straight these days. I swear the way things are, I thank the cat dogs for sending them our way and not on some other planet. It is absolutely amazing to know that around 1,600,000 cats get adopted every year (that’s a tie between them and dogs). Cats deserve nothing but affection, undivided attention, trust, and undying love. Fun fact! All four of these feelings are absolutely free and only require a will that we already possess.

Amidst all of these cute and hilarious moments take birth which we are all here for. Scroll down below for some more fun cat snaps.

10. Solidarity or taking the piss? 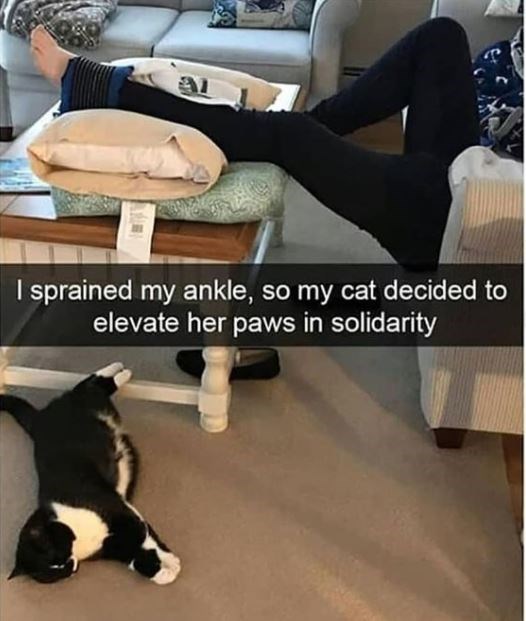 I think you’ve got it all wrong mate. Your cat is taking the mic.

11. Does the warranty says to reassemble a cat when it breaks down? 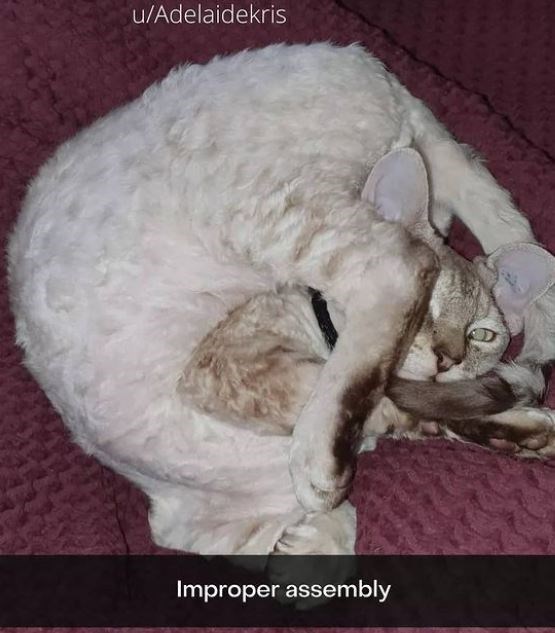 I think the wind was blowing a little too fast that day.

12. He is unhappy and for some reason, I find his expressions very cute. 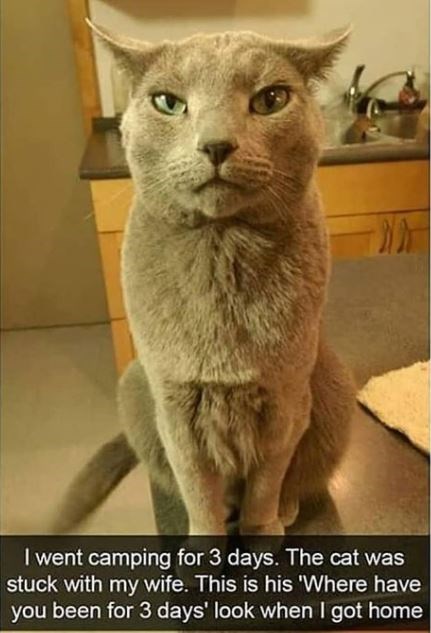 Let that kitty camp on your chest for at least 3 months now. That’s the only way he is going to forgive you.

13. Excuse me? You are supposed to knock! 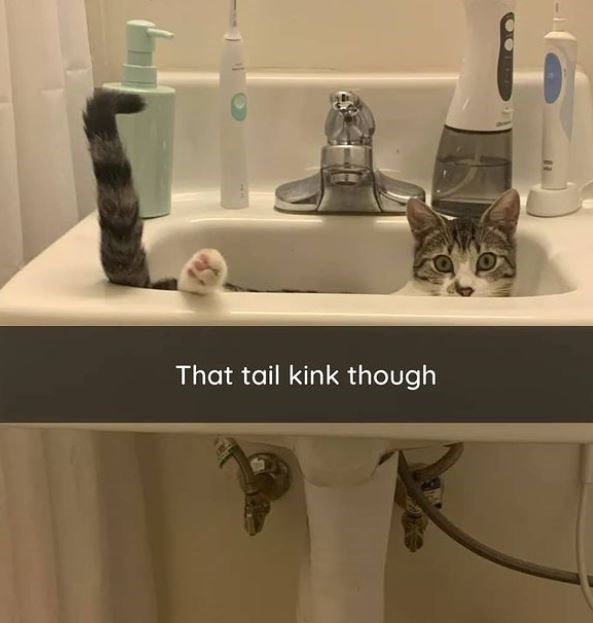 Invasion of privacy is a bad thing. Especially when you’re in a sink busy kinking your tail.

14. Oh my god, this is such a wholesome picture. 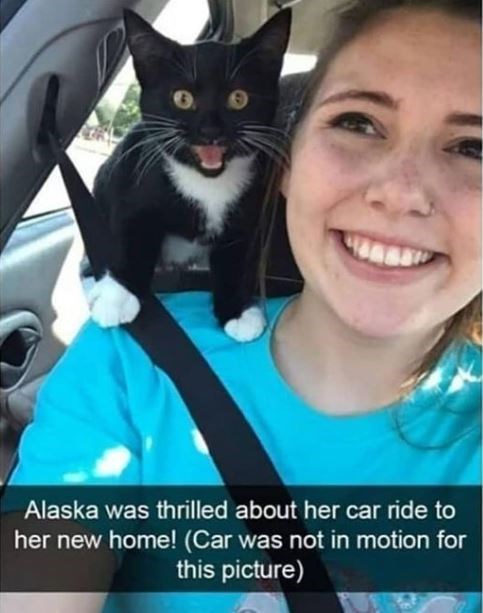 Cats are never shy of expressing their emotions. They act what they feel. It’s very simple and has been successfully working for over 12,000 years.

15. Gotta get them abs and then them kitties! 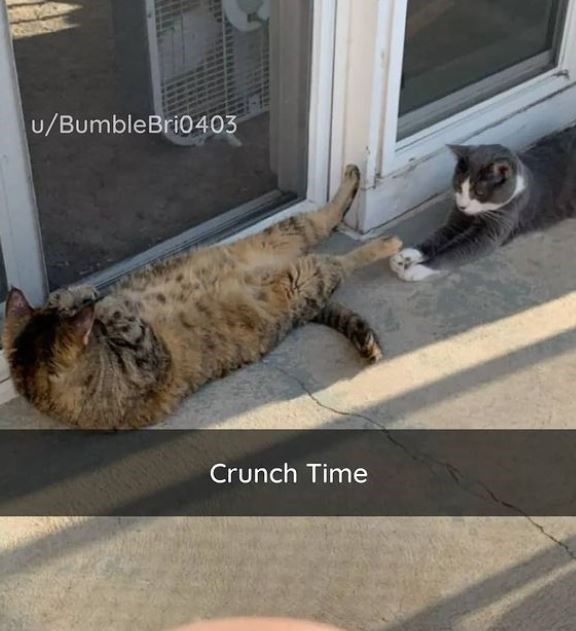 I’d get a muscle cramp if I did that. 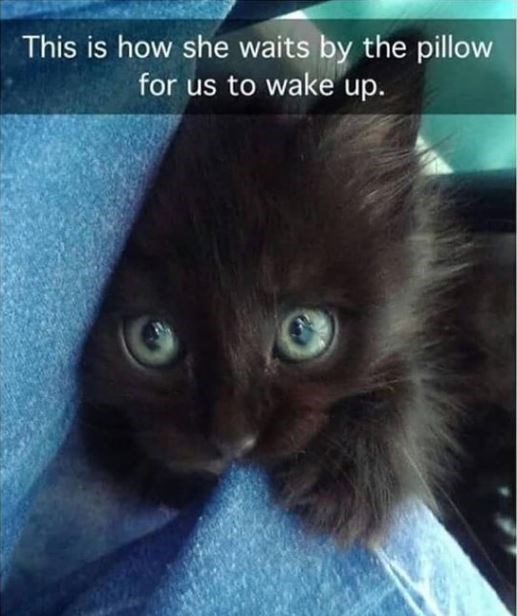 I like the whole idea of your pet laying next to you patiently waiting for you to wake up, but with those eyes, I may get a heart attack as soon as I open my eyes. Maybe a little too close, honey. Either way, a very cute and caring thing to do. 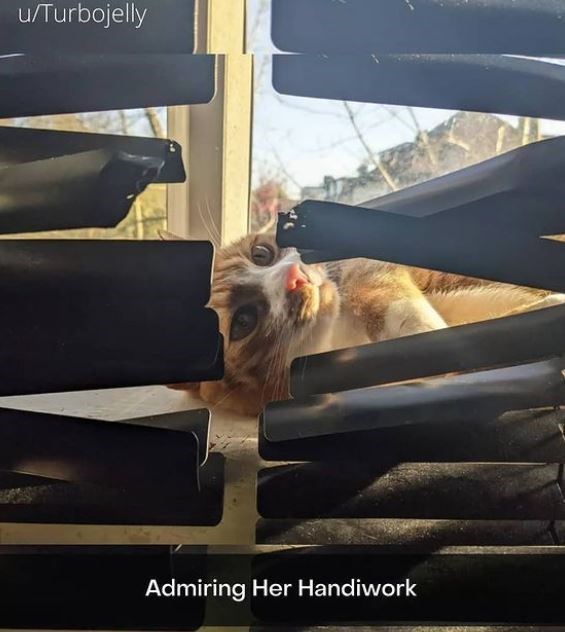 I wonder what the whole idea was behind this act.

18. Because this piece is supposed to fit in your heart.

I should get a reward for that cheesy-ass line. 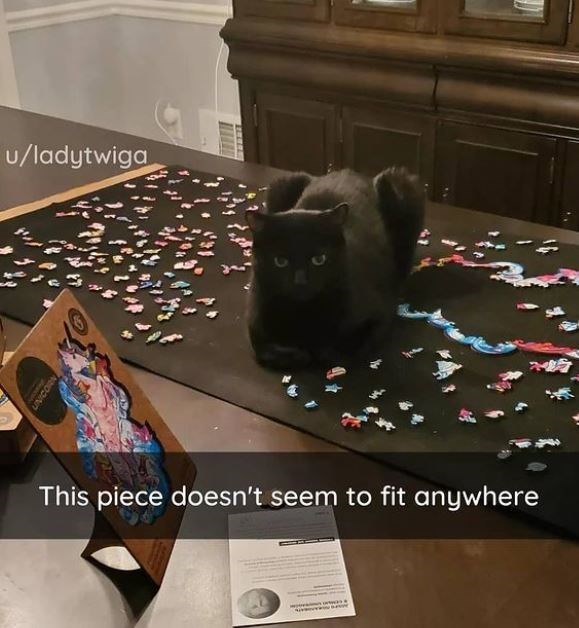 That’s where they belong, right in hearts forever. Because that’s what they deserve.

Do you guys know what happens when you provide this adorable animal with everlasting love? They make you their whole world. Their entire life revolves around you. It’s crazy how serious commitment is for animals.

I really hope you guys enjoyed it and the snaps brightened up your days a little. Don’t forget to share your thoughts in the comments section down below.