There is no limit to how crazy one can get.

Now, don’t get me wrong, I am not making fun of mental illnesses but this girl took the cake on how crazy you can act and still get by because of your looks. She even seemed funny and relatable at first as explained by the guy who fell for her schtick. You see, he just wanted to find someone to date and as one does, he went looking through tinder.

From what I can say through experience, that wasn’t the best idea. But what else is a person supposed to do? Go out and make friends in this pandemic? That is definitely out of the question. However, because he hadn’t been with anyone for a long time, he ignored many red flags and started thinking with his genital down there.

And as we all know, that never ends well. You can read the whole story by scrolling below and taking a look for yourself.

Honestly, I can say the same about the pizza part at least. 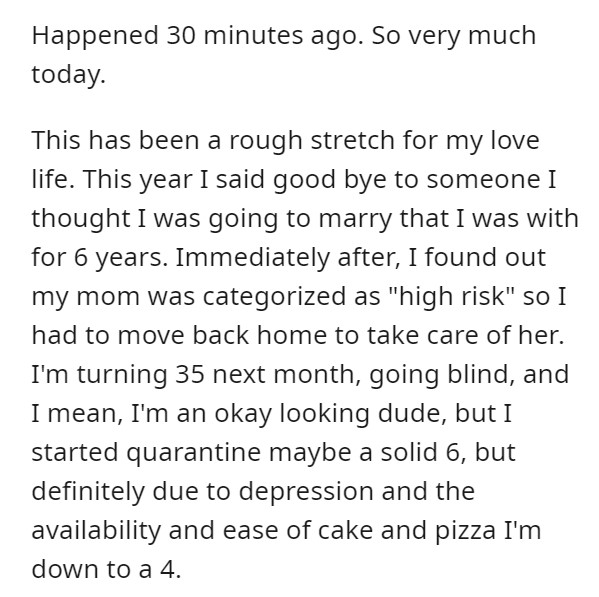 Wait, Isn’t Tinder a dating app, or am I understanding something wrong? 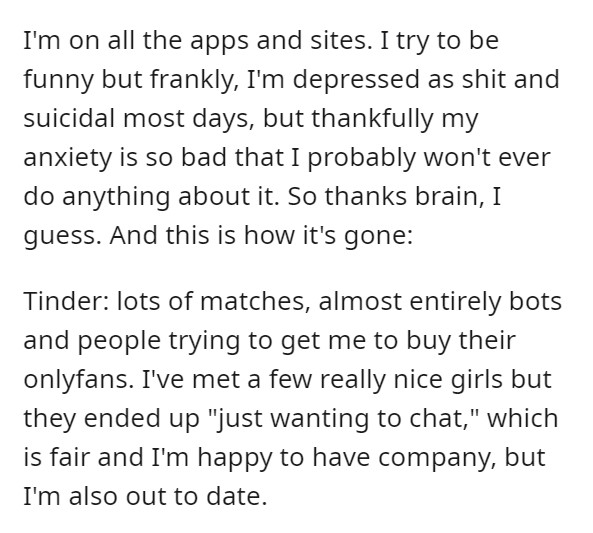 From what I have already read, this guy is desperate which is understandable. 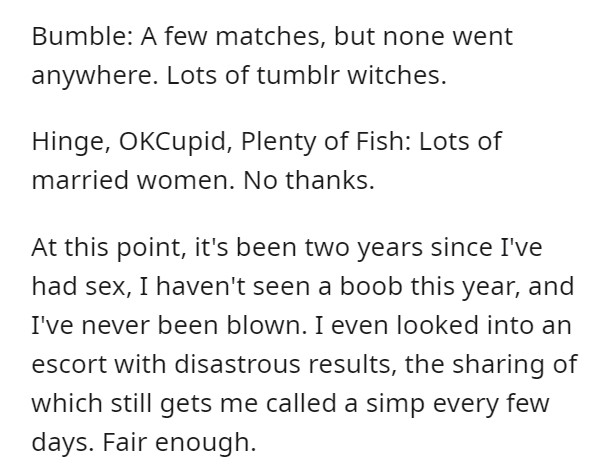 So he was fine with anything as long as he got the attention he wanted.

Things seemed to go well for the dude when he found a girl he liked. 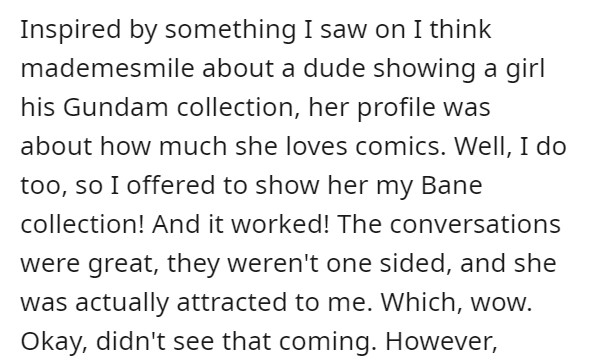 However, as we all know this wouldn’t be here if the story was all flowers and rainbows. 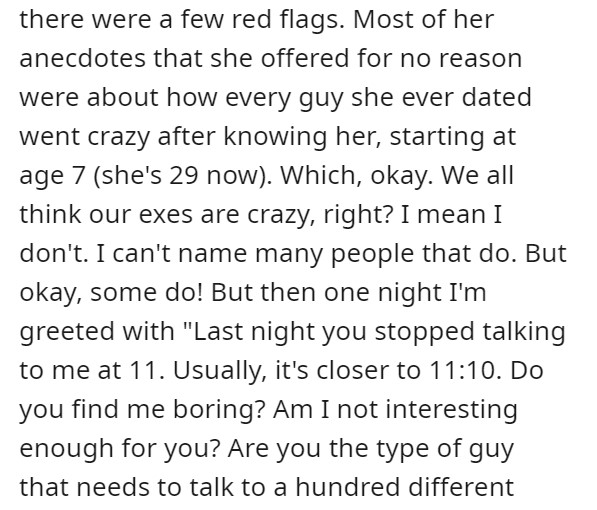 Even after all the flags, he encountered he still decided to meet her. 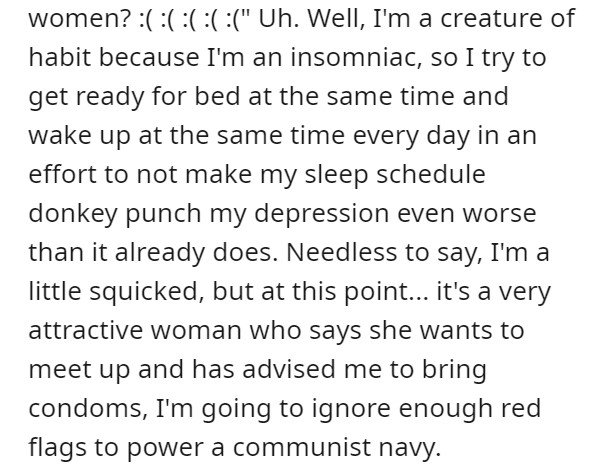 The first date was planned in a park and that actually doesn’t sound like a bad idea. 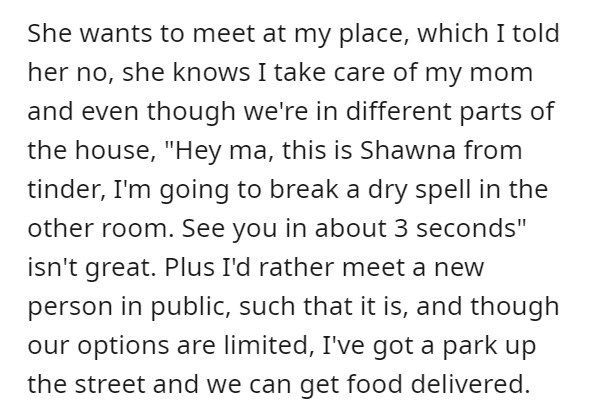 It was still somewhat going well even though she had exhibited some crazy behavior. 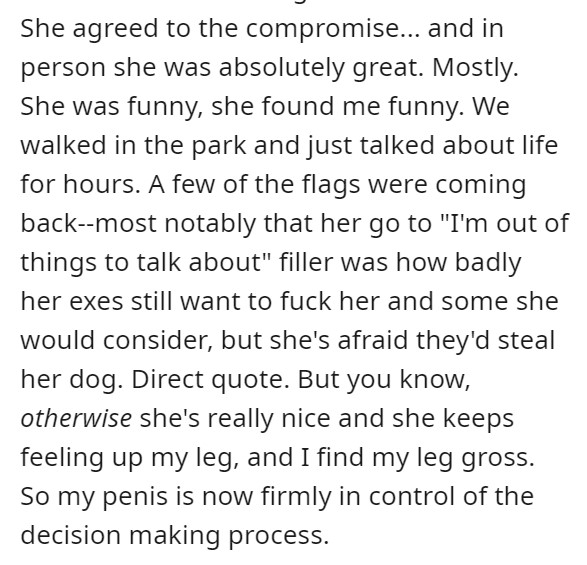 But this is when it all started to go wrong. 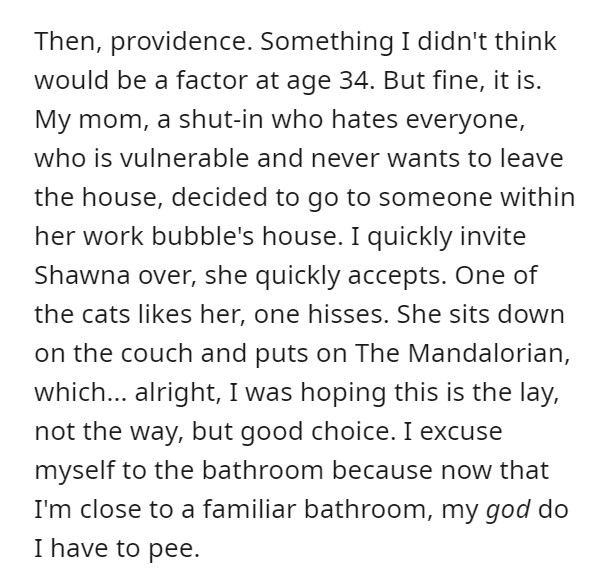 In his defense water does shop up very clearly on tan pants. 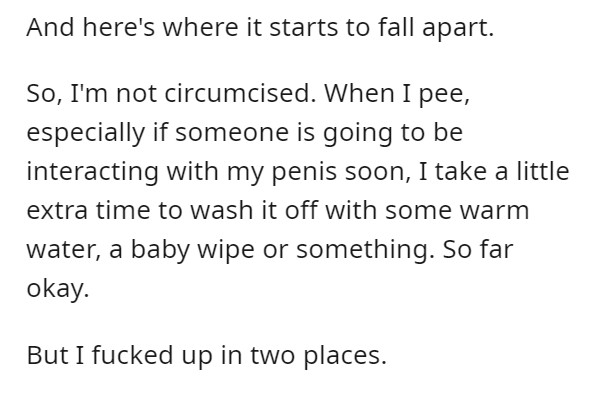 Doctors were literally pushing me to have my son circumcised. His mother was the type that thinks it looks weird, that he would be bullied/judged harshly and she didn’t “want to peel his dick skin back to clean it” because somehow that is significantly worse than wiping poop off your kid’s anus/ass cheeks.

I regret giving in but I was the only one in the room out of like five people who didn’t have a problem with him being uncircumcised. I didn’t want it but I let it happen and I feel like shit. The first time I failed my son/screwed up being a father and the kid wasn’t even three days old. –LtLwormonabigfknhook

So he was just being thorough.

But the fact that he didn’t lock the door is stupid. Then again I have done that a few times as well. 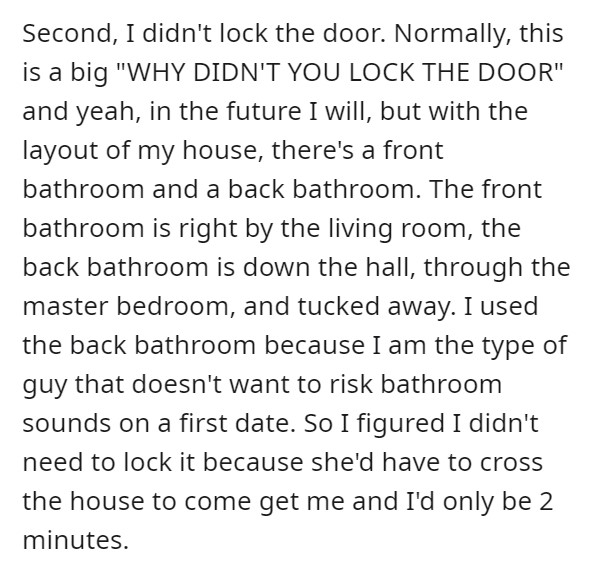 I may not know much about male anatomy but I know that this sort of thing can happen sometimes. 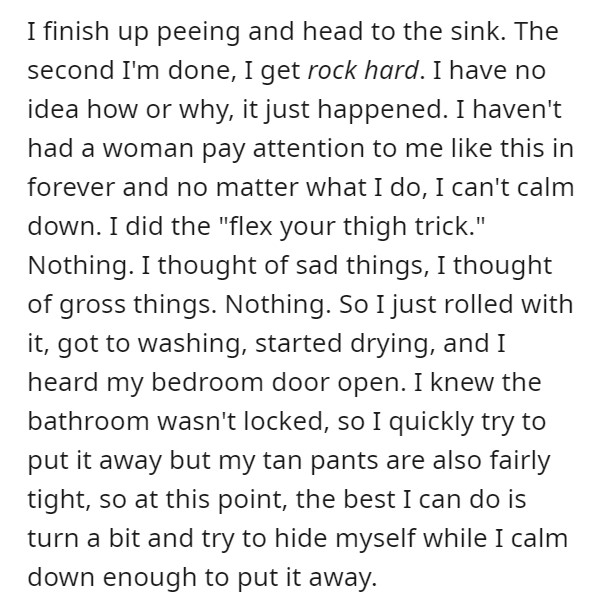 However, who in their right mind would barge into someone’s bathroom? 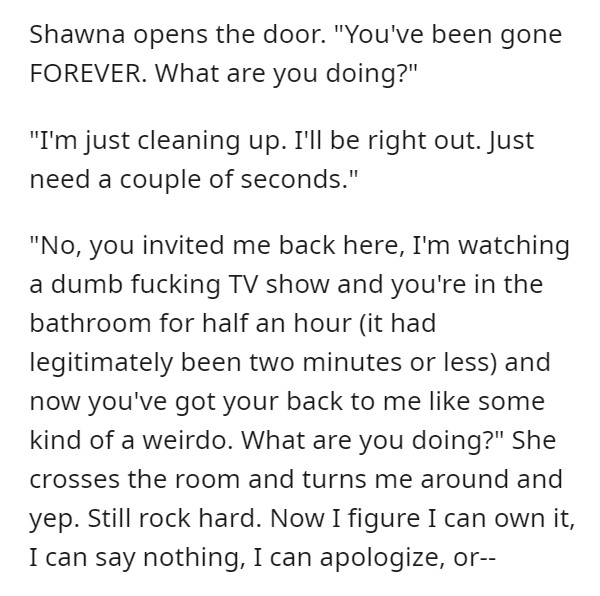 And this is when she drops the big bomb. She had apparently never seen it. 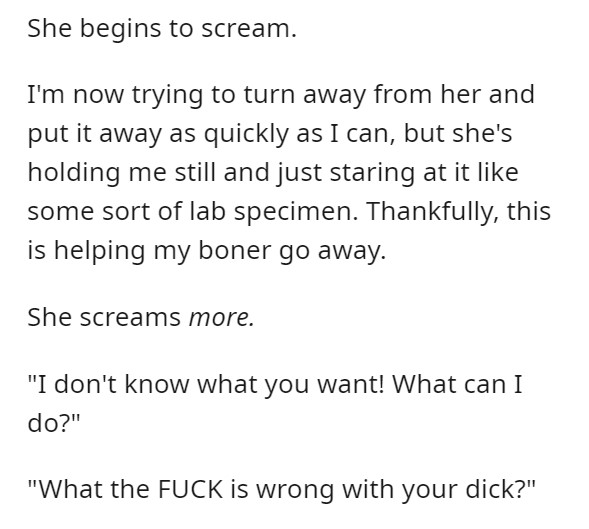 And rather than being polite if she was surprised, she was straight-up rude. 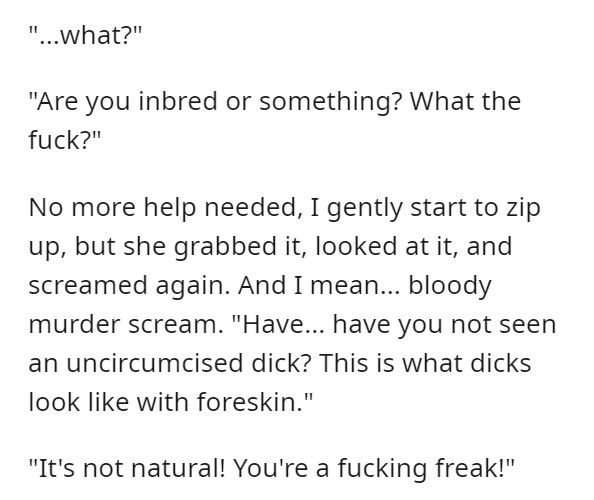 And it doesn’t end there. Even the police were called. 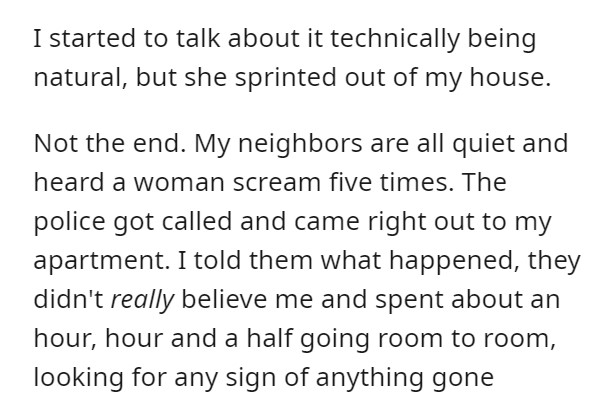 I honestly feel really bad for the guy. 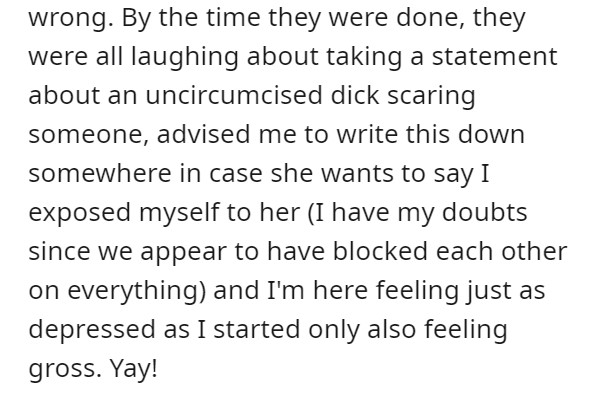 Simply put, he didn’t do anything to deserve this kind of behavior. 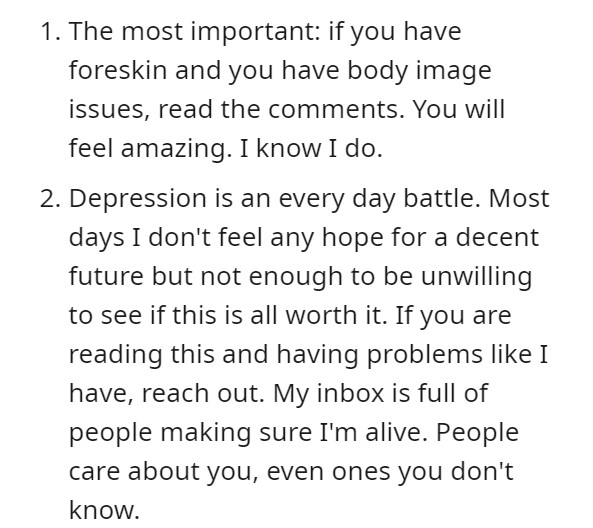 The best way to move on from something is to make a joke out of it. 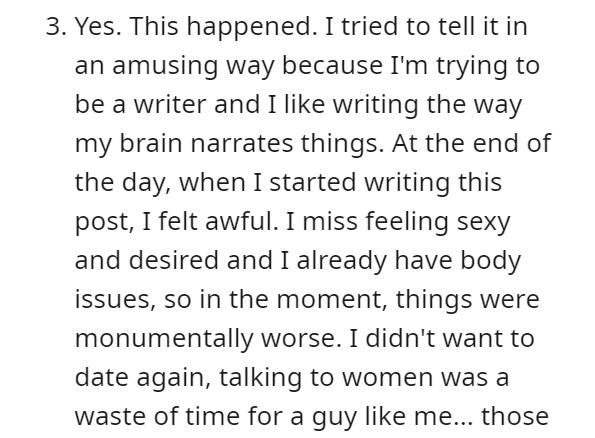 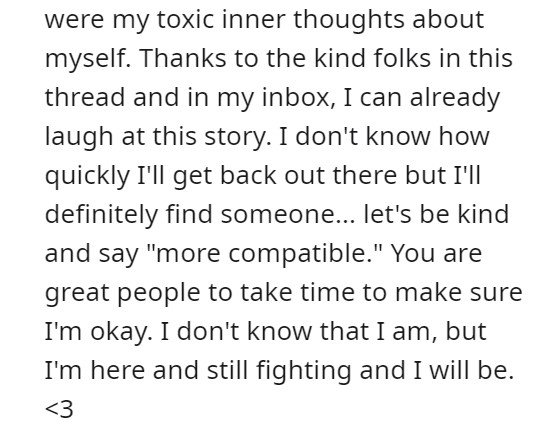 At least he didn’t get serious with her? I know he would have regretted that much more later on. What did you think of this crazy rollercoaster ride? Comment down below and let us know.