Periods are a normal bodily function.

And no one should have to be shamed when it comes to that. However, even in this day and age, there are still people who feel queasy just by talking about this sort of thing. You would think that would happen and yet here we are. Girls have to hide every evidence from their bathroom and bedroom that they bleed every month and it is sad.

I mean what is the big deal? I am not saying leaving used products out on the toilet is the way to go but we shouldn’t have to hide the wrappers or the unopened packages. Although even many women are uncomfortable with this idea since this has been ingrained in us since we were little and it is hard to change that concept.

So this story is a bit more complicated. No one wants to see used pads. 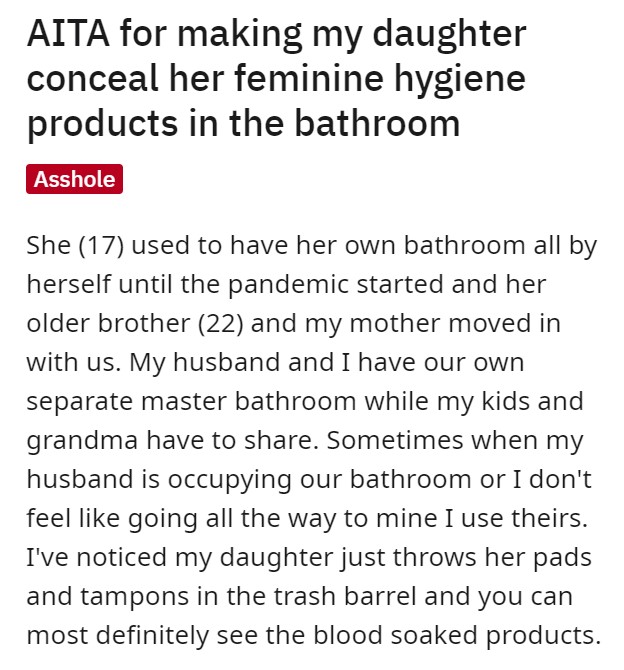 It shouldn’t be about her older brother, it’s just about hygiene and smell.

Maybe she was? After all, we don’t know how the mother phrased the subject. 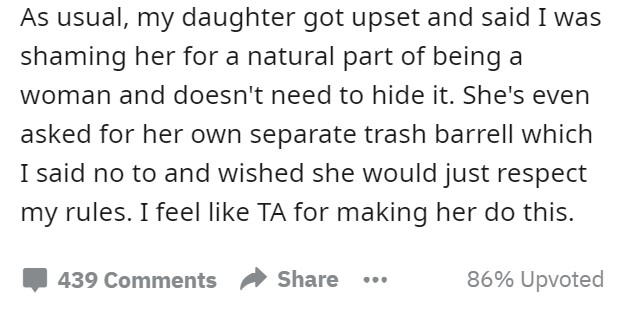 But it is clear the mother doesn’t want to compromise and wants her daughter to listen.

I second this! Most trashcans should have a lid unless only paper or tissue goes in there. 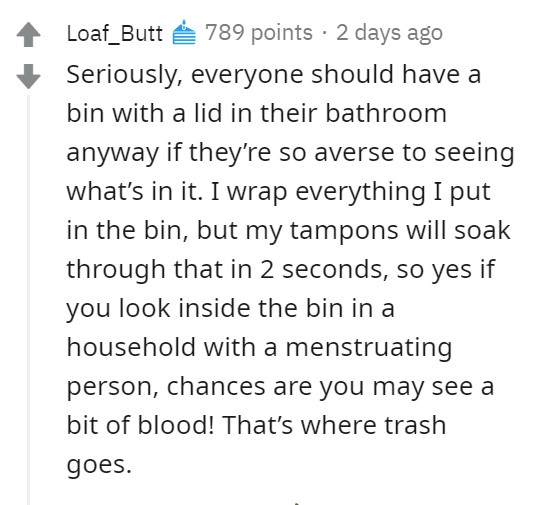 Honestly, No one, male or female would like to see that. 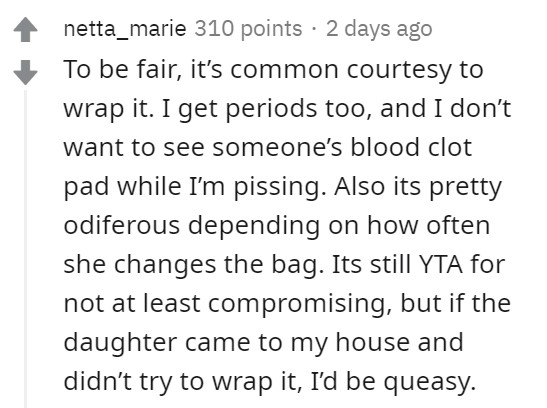 The mother might have said that as well. We need more information. 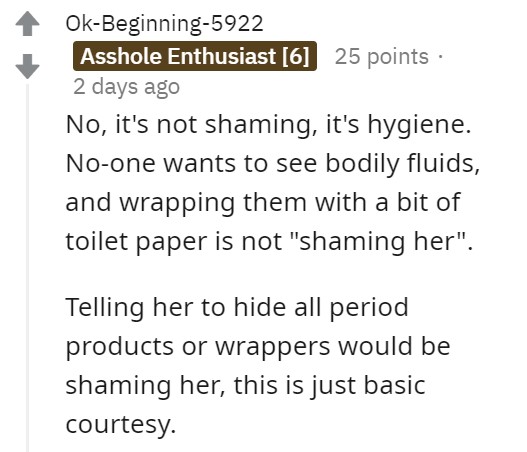 That might have been the way to go rather than asking on the internet. 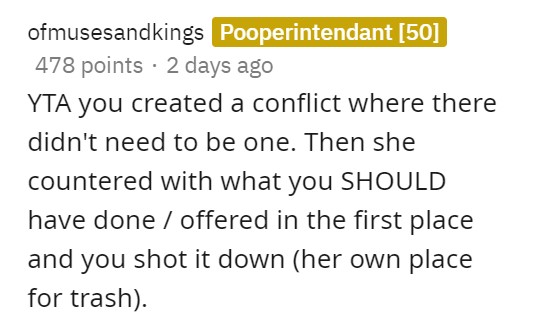 The son or the gender of a person shouldn’t even factor in this scenario. 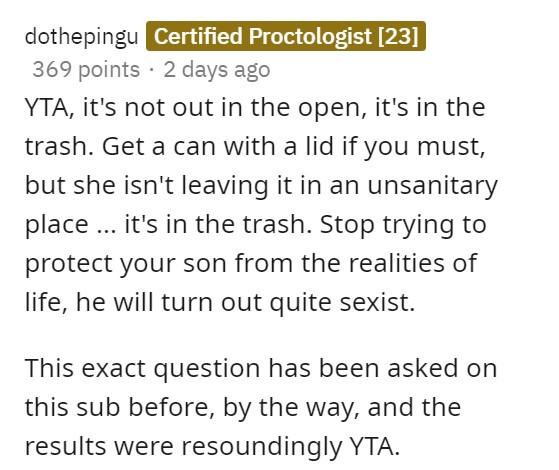 What if it is the guest bathroom as well? We can’t say that it is very sanitary. 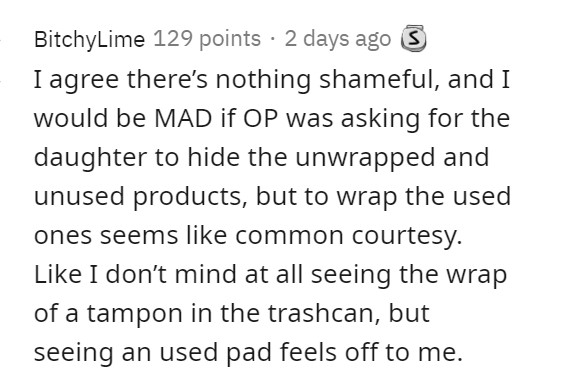 People are literally full of blood. People deal with blood things in the bathroom. Nosebleeds, cuts from shaving, and random booboos happen all the time.

OP had the chance to give the daughter a lidded rubbish bin that would have served everyone’s purpose, but OP refused this reasonable solution. It doesn’t sound like Daughter is flaunting her menstruation, just not wasting half a roll of TP every time she changes her sanitary product to cover it up.

I thought most people did wrap them. 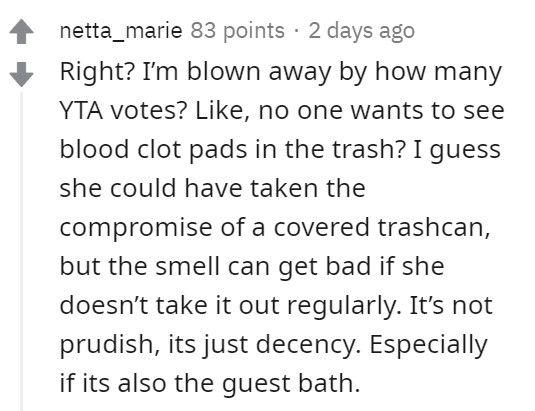 I think the daughter might have misunderstood her mother’s intentions. 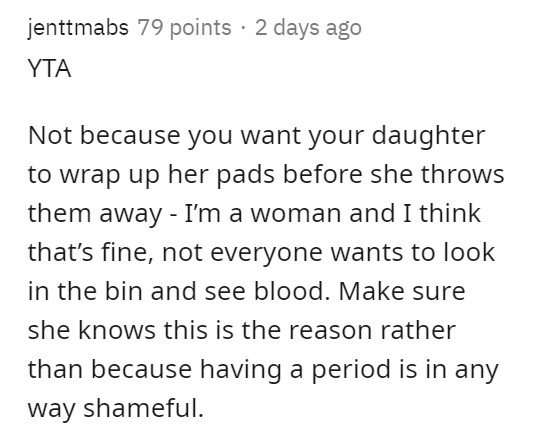 She gets to take responsibility for her own trash and that is an excellent compromise. 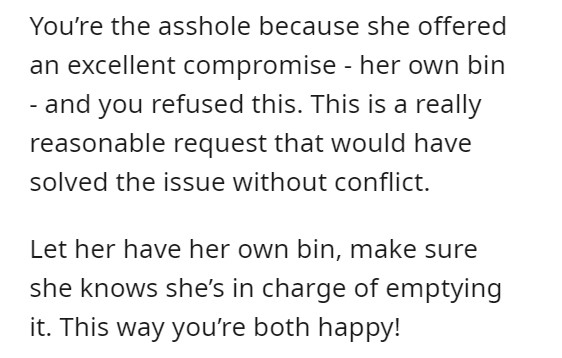 YTA – she even asked you for her own trashcan so you two could compromise yet you refused because you think your opinion is the only one that matters.

I actually wrap my products up myself before throwing them away but the way you’re not respecting her solution at all just shows that you don’t care about how to solve this problem but how to make her do what you want. Also: nobody except for you complained. It’s their bathroom after all and you don’t have to use it, no matter if it’s your house or not.

You’re just looking for a reason to be mad over something. babysterni

What are your thoughts on this? Do you think the mother was in the right? Comment down below and let us know.