Having a healthy and happy family is a blessing.

Not a lot of people are blessed with healthy families. When you ask people about their problems, half of them are linked to them having toxic families. By toxic families, I usually mean toxic parents. A lot of parents think that just because they gave birth to their children, they are entitled to everything in their lives. They stop thinking that they are parents and start thinking they are gods. Some parents also have a habit of never admitting to their mistakes because they think just because they are older, they are always right. This can prove to be problematic for the entire family once the children grow up and realize that they don’t need to suffer at the hands of their parents just because they refuse to change themselves as people.

This woman on Reddit shared her story about her first pregnancy. Her mother has a habit of buying people things and then using them as leverage against them. So the woman refused to let her mother buy her unborn child any gifts. Read the whole story down below:

This was the woman’s first and only pregnancy as the couple wants to only adopt in the future.

The woman’s mother has offered to buy the baby some gifts but she politely refused every time because she already has a lot of baby stuff that her sister and other family members gave her. 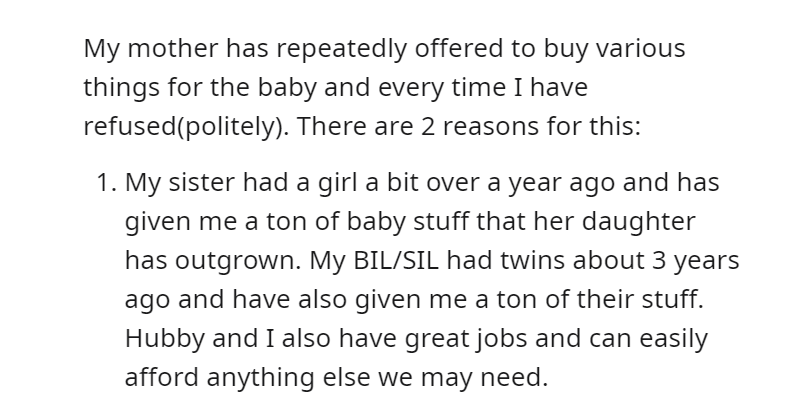 But the more important reason was that her mother gets people stuff and holds it over them. She refuses to realize this flaw and repeats the same things over and over again. 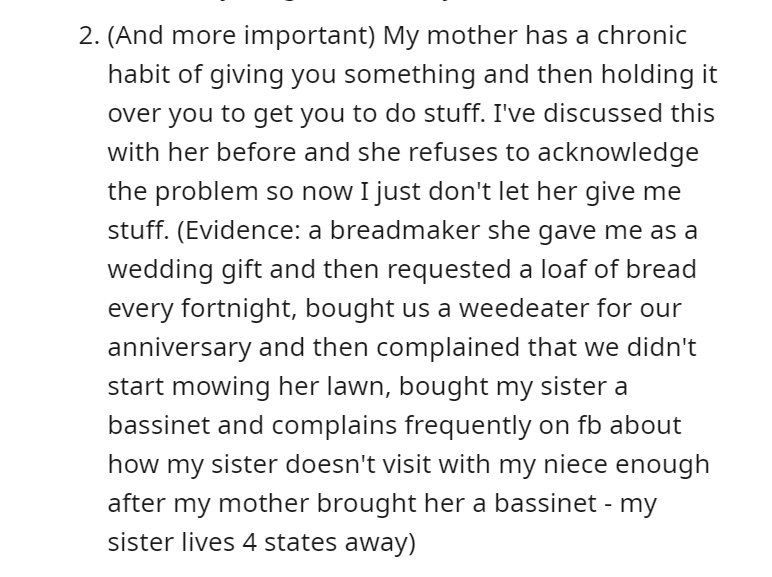 So, one day her mother gives her a surprise visit and tells her to go baby shopping with her. The woman refused and her mother created a huge scene at her home.

Her mother called her out on social media and all her distant relatives were enraged.

This is why the woman thinks she might be wrong:

In my opinion, the woman did the right thing. Her mother does not intend to buy her any gifts, she just wants to trap her and guilt-trip her into thinking she is doing her a favor. Her mother seems like a narcissist who creates a scene when she does not get things her way. Her mother is wrong in this scenario.

It is not a gift if strings are attached. 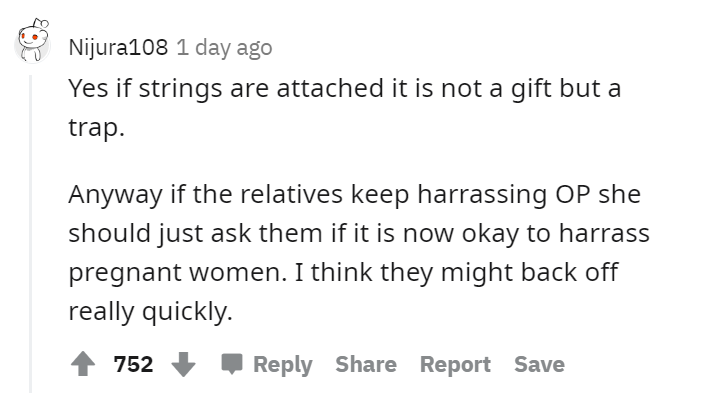 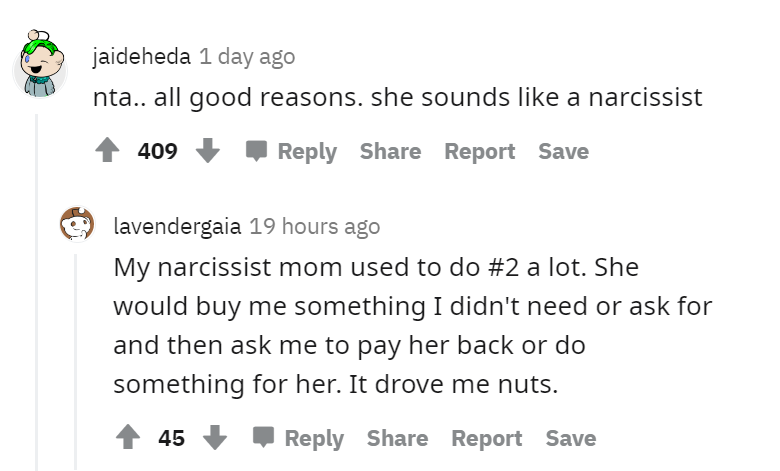 The woman is not obliged to accept any gifts. 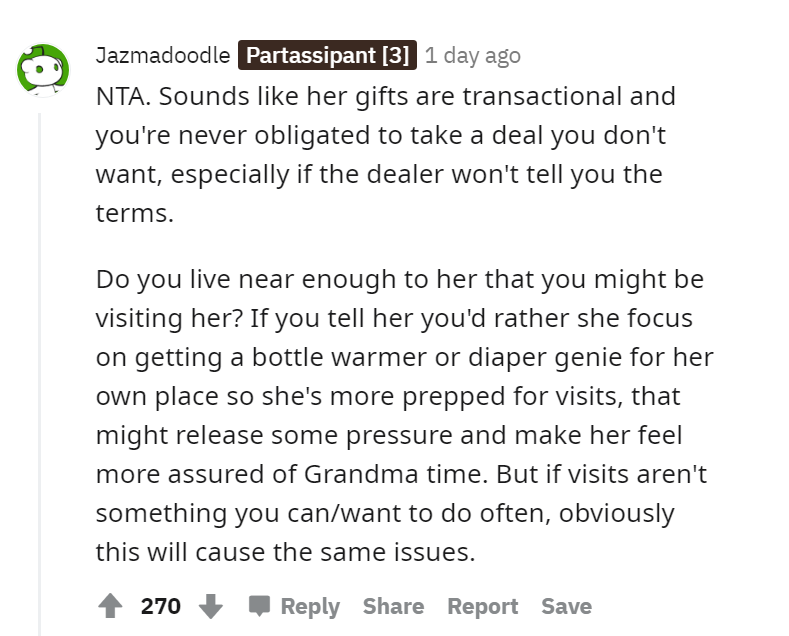 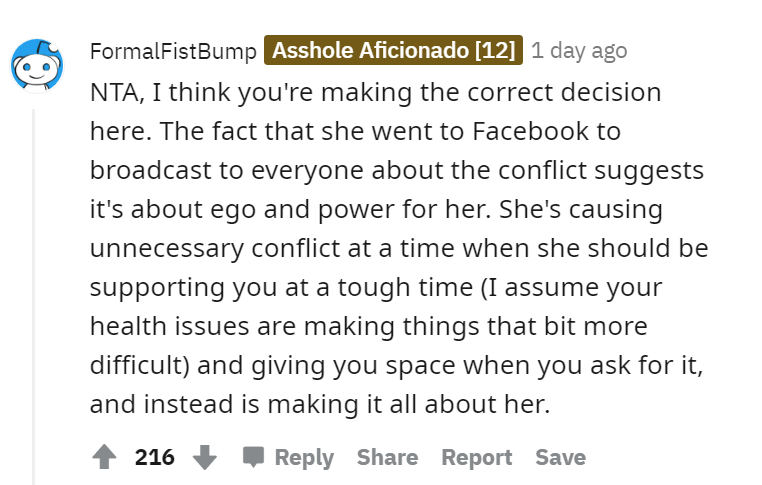 It isn’t the woman’s fault at all. 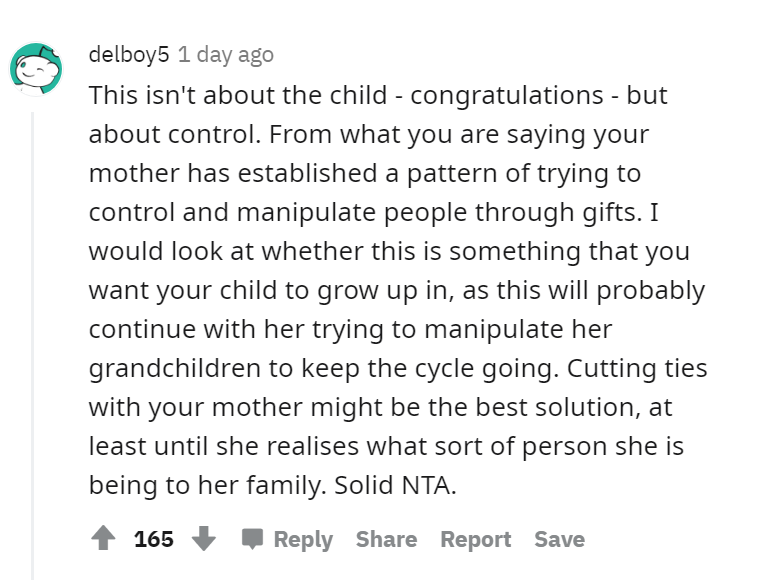 Do you think the woman was too harsh on her mother? Share your thoughts with us in the comments below.