Never judge a person based on their appearance.

Not everyone who is rich wears it on their sleeves. On the contrary, the people who have the most money to spend don’t really show it off for no reason. And even though we heard this sort of story all the time, I suppose salespeople still don’t understand this simple fact. They would rather waste their money on an individual who is dressed to the nines but doesn’t really want to buy anything than a person who is in comfortable overalls and is there to just get what they need without any fuss.

This is the reason many people lose out on making commission just because they were judgemental the moment someone walked in. That is exactly what happened with this couple. They were actually thinking of buying a wedding ring and thought against getting a diamond one. Which many would understand since people are moving away from forking over a large amount on diamonds while they don’t really have a lot of value for the future.

I can agree that diamonds aren’t really a sound investment whichever way you look at it. 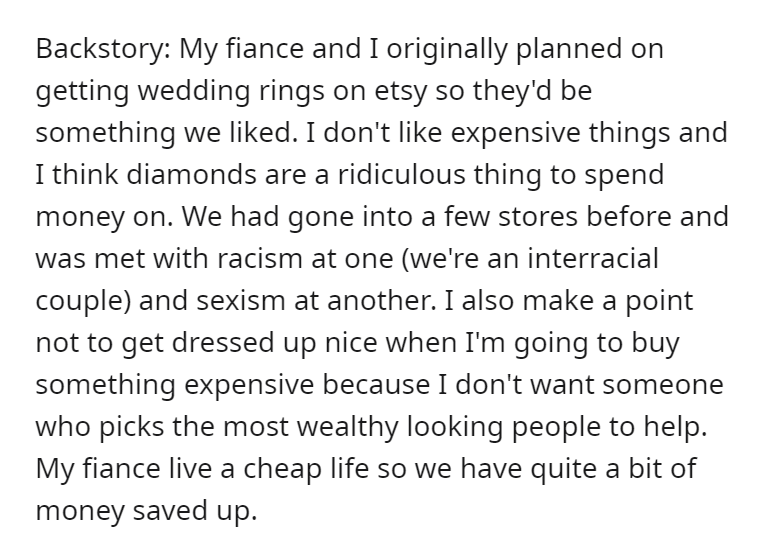 Chad clearly wanted a lot more commission and other types of jewelry wouldn’t really help him with that. 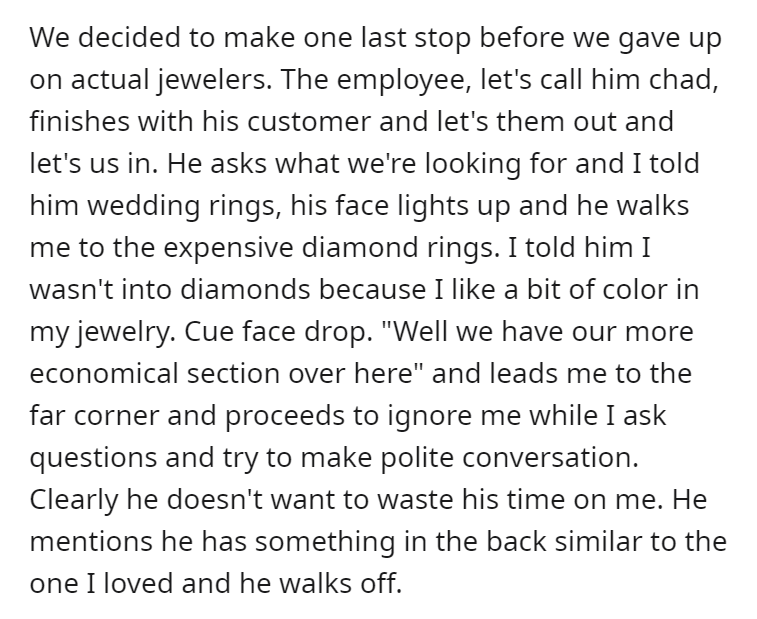 But at the end of the day, they did decide to get diamond rings because they liked the look of it. 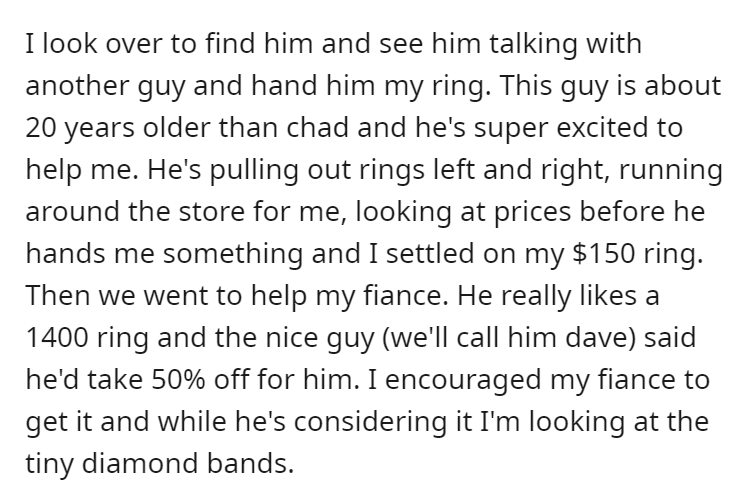 Chad was clearly fuming because if he had only helped them, he would be the one getting the commission for this transaction. 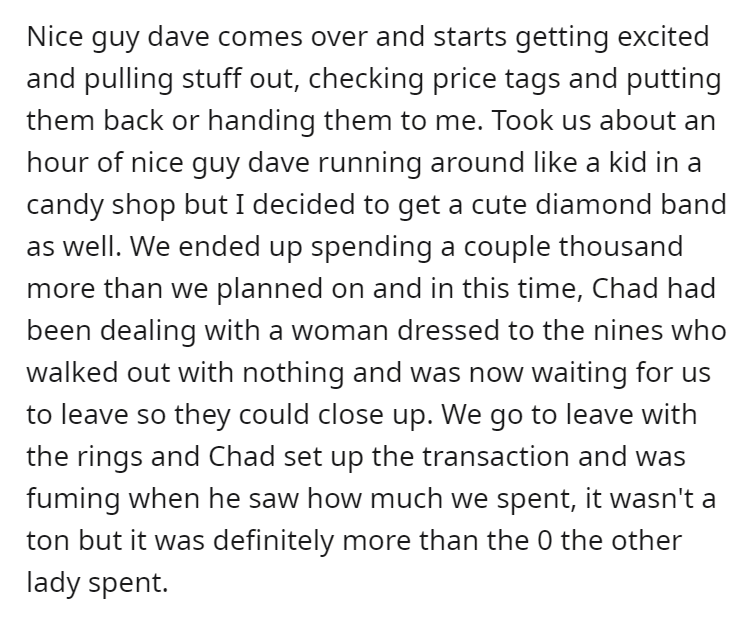 Maybe this helped him learn the lesson that he shouldn’t judge people based on looks.

Many people in the comments urged them to watch the pretty woman as a  similar thing happened there as well. 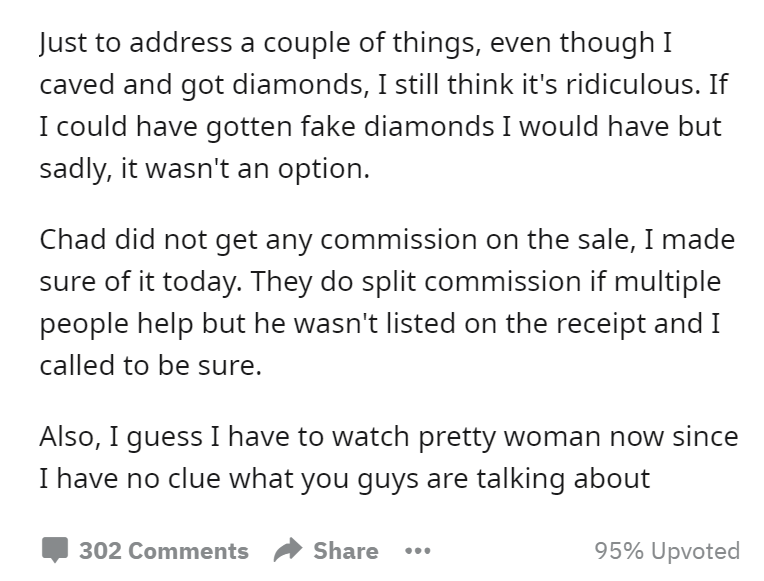 Apparently many people have dealt with this experience. 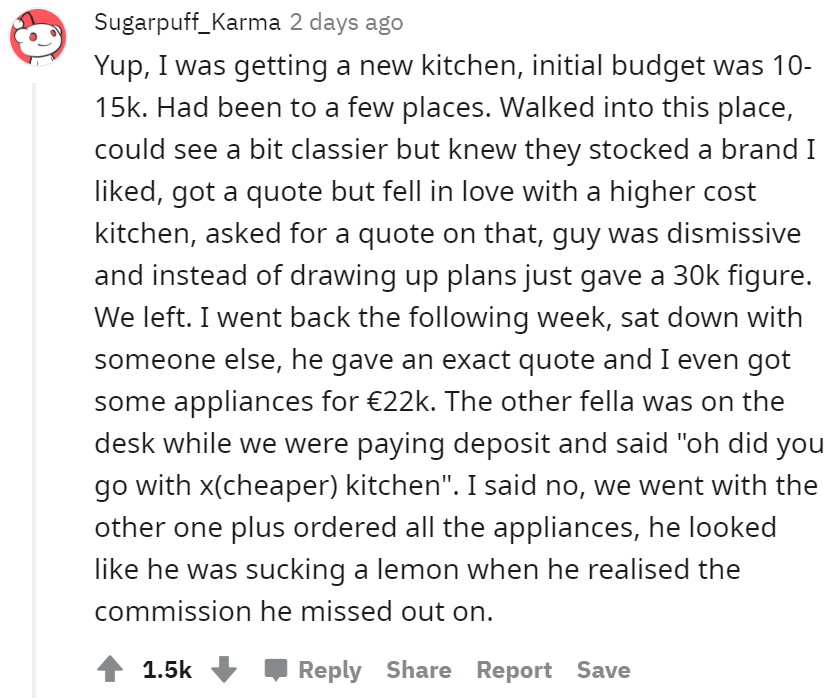 I can never understand why salespeople do this when they want to make a commission at the end of the day. 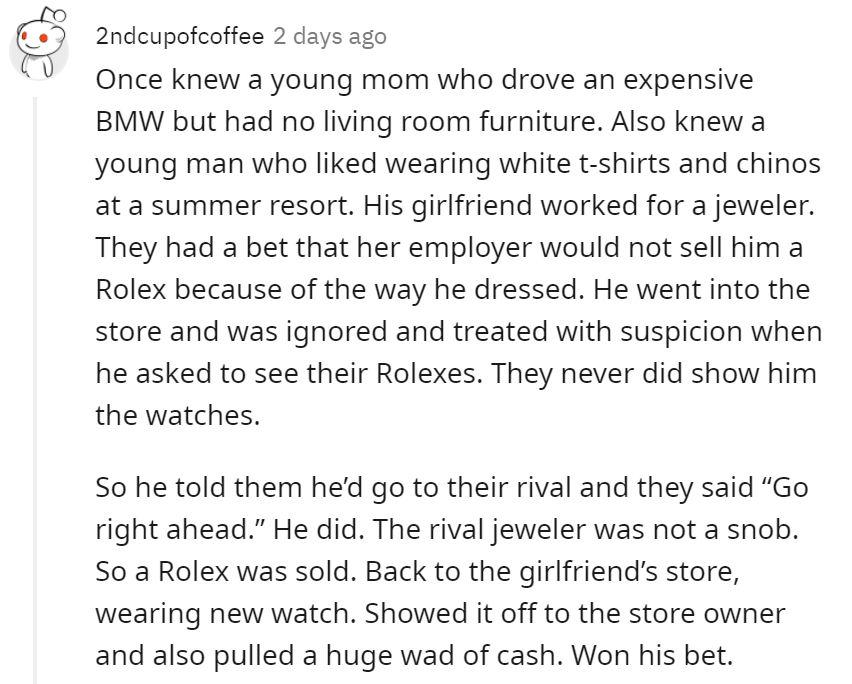 I bet most people regret making this decision afterward. 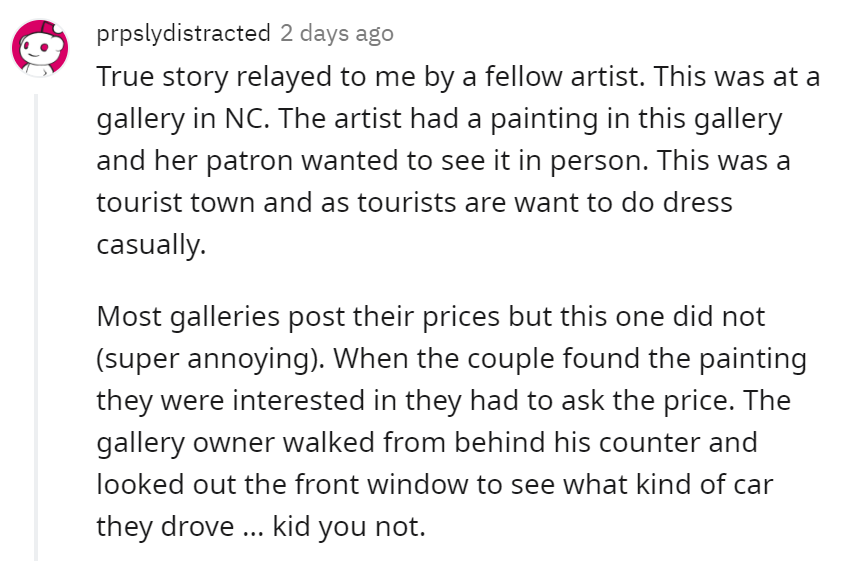 I knew someone who managed the jewelry department at a Kmart. You’d expect them to have only the cheaper kind of jewelry there, but they actually had very nice, expensive items as well. The reason for this is Chad and his ilk at jewelry stores – lots of tradesmen, farmers, other blue-collar workers make serious bank, and Kmart didn’t ignore or condescend to them. –ggapsfface

A car shouldn’t be a way to show off wealth, it is only a means of transport. 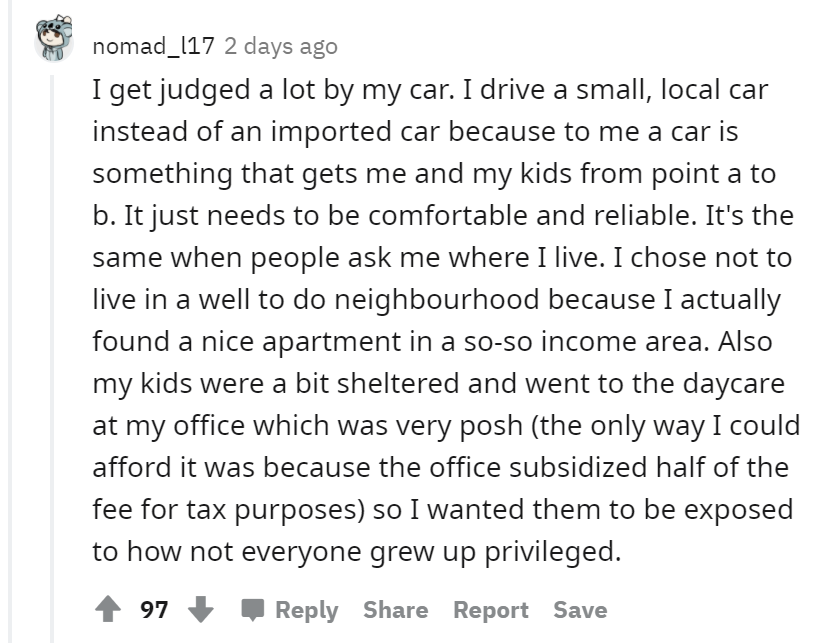 Individuals who look like they don’t have enough money for lunch are usually the ones who buy a Rolex on a whim. 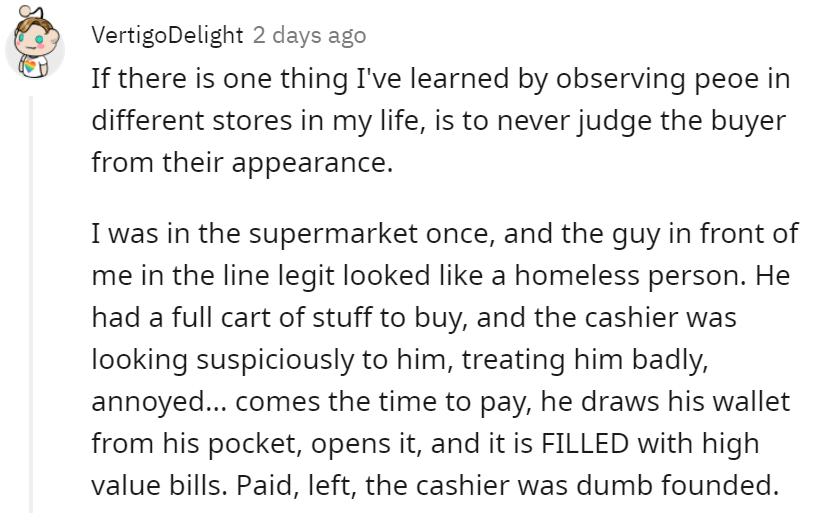 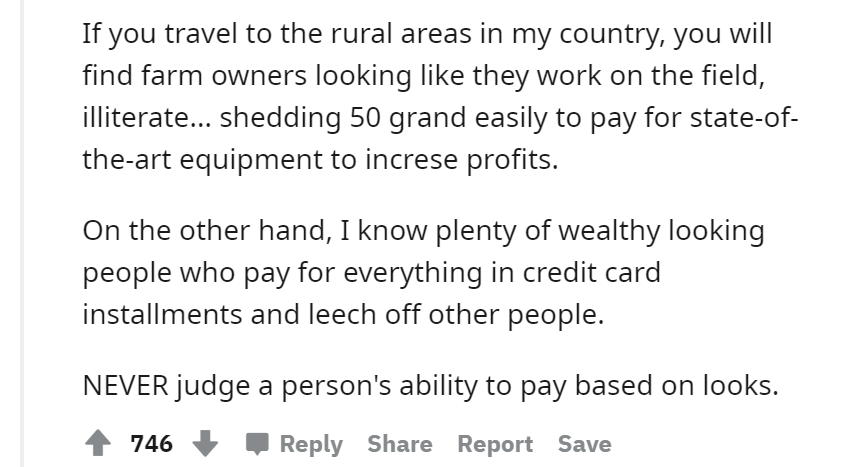 This should be the first rule of retail and also being a decent human being. 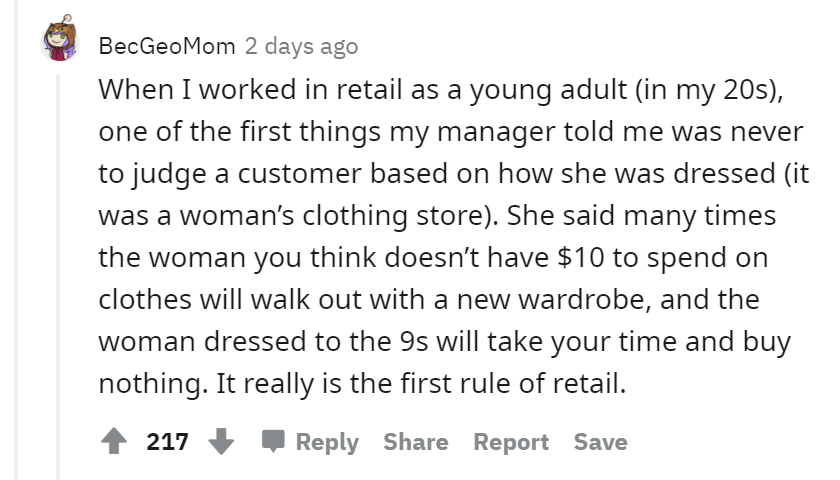 My dad stopped in a jewelry store after work one day to buy my mom’s engagement ring. A little bit dirty/dusty with some holes in his shirt, etc. The people refused to even acknowledge him. He walked out and right into the shop next door (Kay) who were lovely to him and he spent a pretty penny on her ring, just like he was planning to. My husband then went to Kay for my ring, and my brothers plan to do the same when it comes their time.

The original shop he went into is no longer in business, lmao. –MelOdessey

Has anything of this sort ever happened to you? If so let us know your experience in the comments below.