This doggo does not want to accept that she is old enough to not sleep on her sister’s back anymore!

One dog, life is good. Two dogs? Life is set forever. Not many get the fortune of having puppy pets around them at all, but those who do know exactly what I am talking about.

Dogs are the kind of animal you can not lay your eyes on. Be it, they are playing, resting, or wagging their tail a.k.a sending lots and lots of love. All this and much more makes you want to love them even more so than before. And this cycle continues forever.

Frannie and Trixie, are the new hot sisters in the town of the internet. What made these two dogs will surprise you or maybe confuse you. We will let you be the judges of that.

Frannie is the older between the two. And when Trixie become the new member of the family, Frannie was overly excited and super happy about it. The dog connected instantly and are inseparable.

Frannie found herself a new companion to live with and Trixie, found herself the coziest pillow in the world. It will all make sense in just a minute.

Let’s enjoy this cute story of Trixie who loves to sleep on her sister Frannie even though she is now a fully grown doggo. Some habits always stick by, eh?

Frannie welcomed Trixie with all her heart and plays the perfect role of a protective sister. 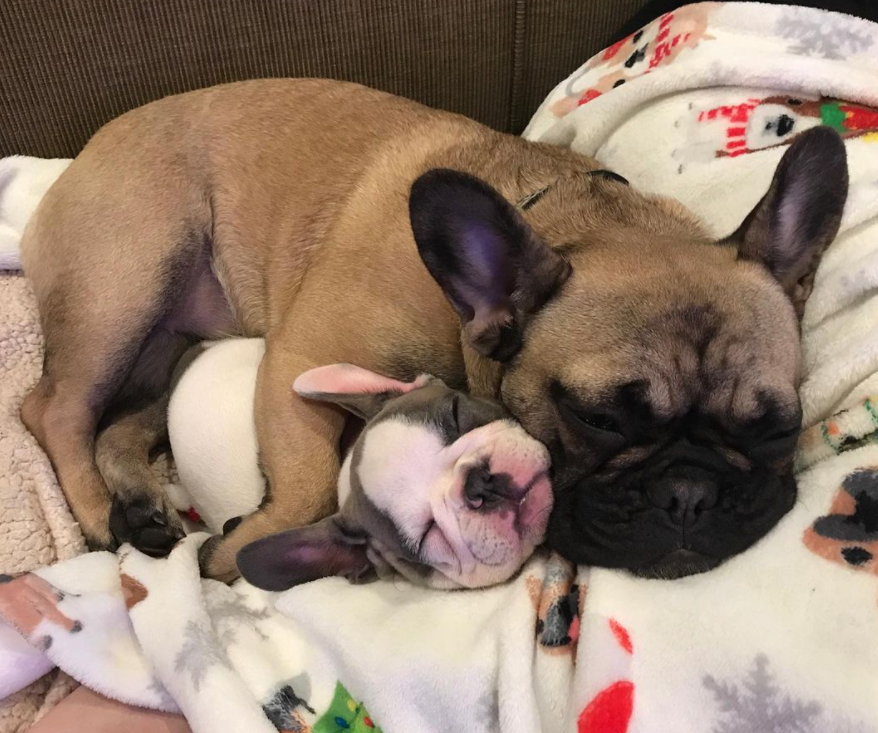 From the very first moment, it felt as if the two sisters are glued together. Their relationship felt so cohesive that nothing could separate them. Who doesn’t love a positive sisterly relationship?

Trixie was quick to develop a new habit and a unique habit, and it involved her elder sister Frannie. For some reason, Trixie found absolute joy in sleeping on top of sister Frannie. Yup! The way this doggo cuddles up on top of her sister creates such a beautiful image.

Trixie looks so comfortable and at peace! And sis Frannie seems to have no issues with it. 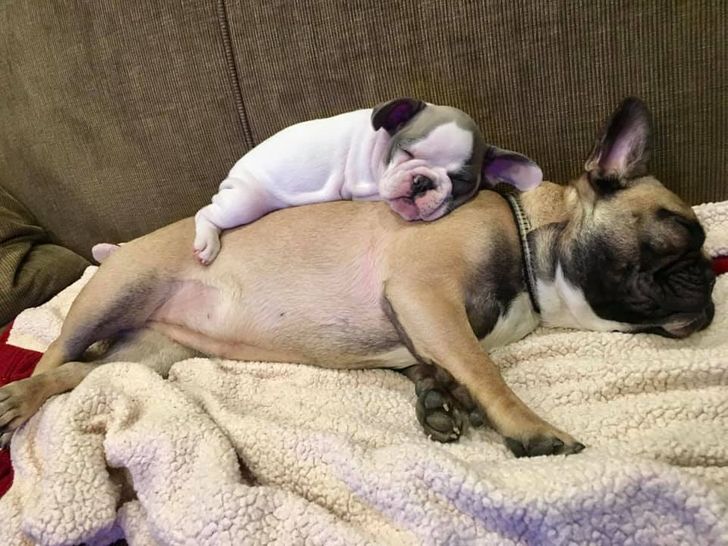 The two sisters grew up together, having a happy, joyous, and fun time together. The dogs would support each other at every moment. The affection between them has been increasing exponentially, and this has resulted in the strongest bond among the two forever.

They sometimes like to have a nice, long, chit-chat standing by the window, watching the night’s sky and keeping a lookout on the neighborhood. 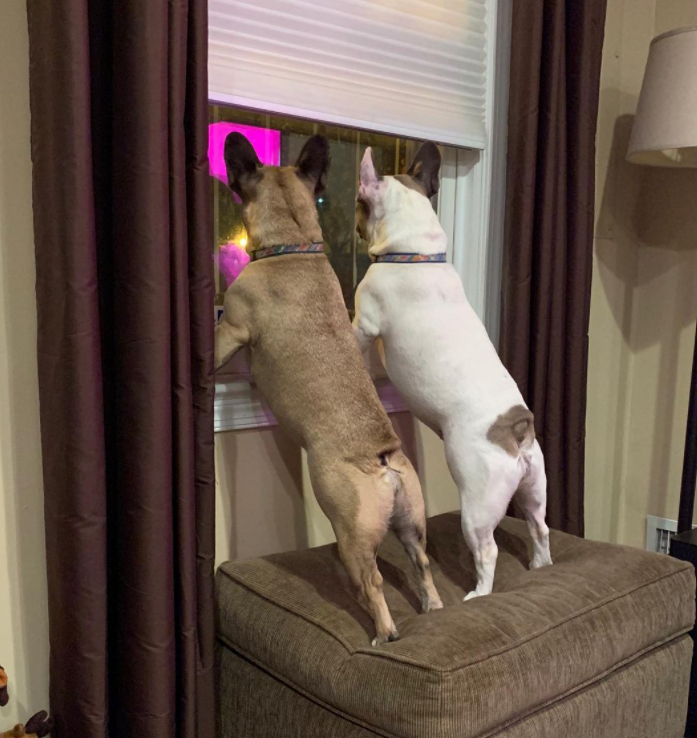 And sometimes the two would just lay down in front of a nice cozy fireplace and enjoy their time through the season of winter, together!

“So, how was your day Trix?” “With you, always perfect sis.” 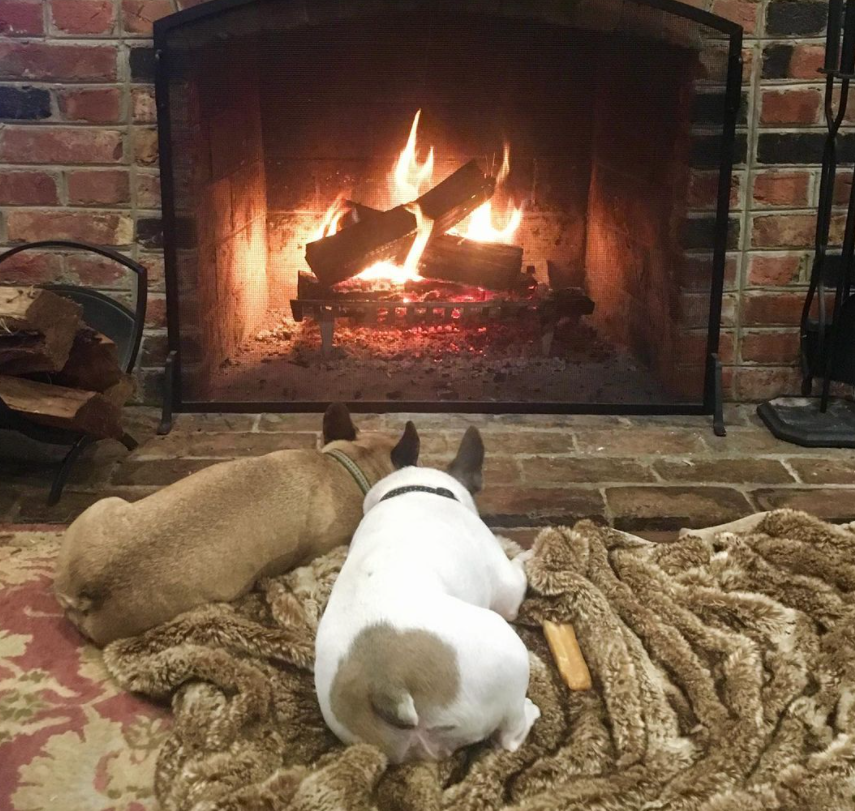 Amidst the perfect development of this relationship between Frannie and Trixie, the little one did not move on from her old habit. For some reason, she chose to completely ignore the fact that she is now as tall as her elder sister Frannie and she is old enough to sleep, maybe, NOT on your sister. But, it is what it is.

I cannot stop laughing at this! Does Frannie even have an option here? Hahaha! 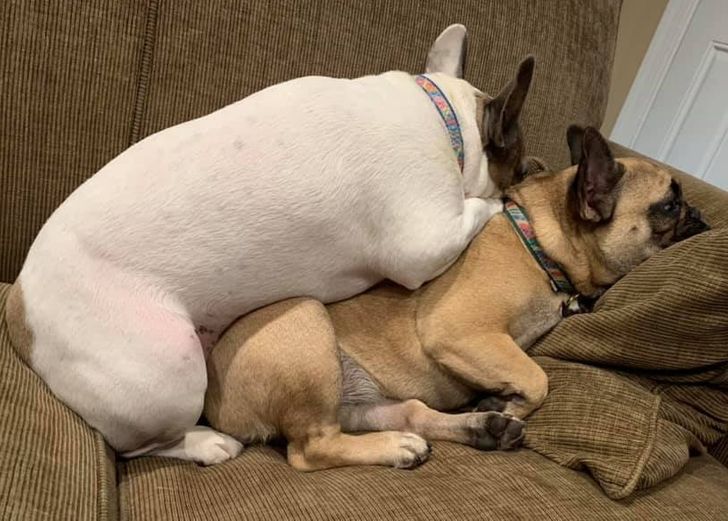 It has become a consistent thing now. It feels like Frannie is well aware that this habit of Trixie is not gonna go away anytime soon now, so has accepted the reality and lets her sleep, or rest, peacefully on top of her. What an elder sister! Kudos to you, Frannie.

Sneaky Trixie is enjoying every moment of it,  and Frannie’s expressions are too funny! 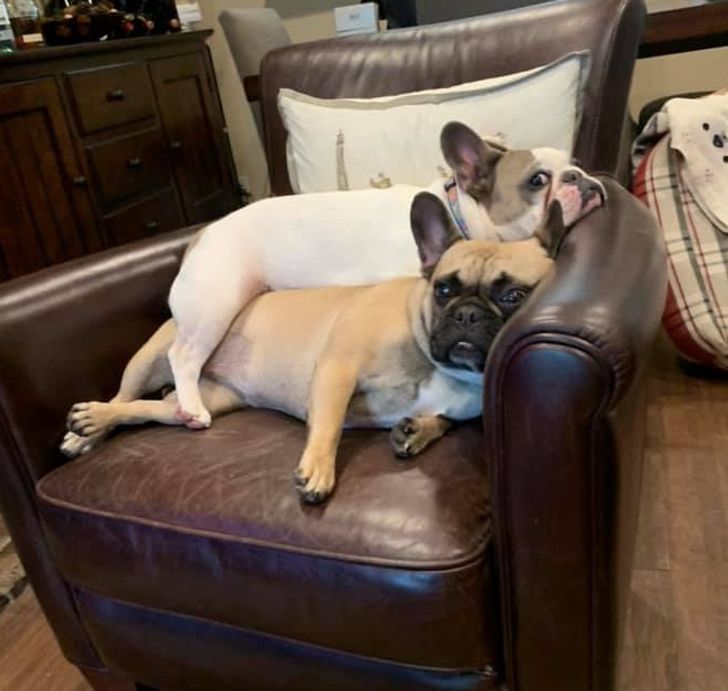 This just goes on to show, that Frannie would do anything to keep her bond with Trixie strong, and unbreakable. You go, Frannie! 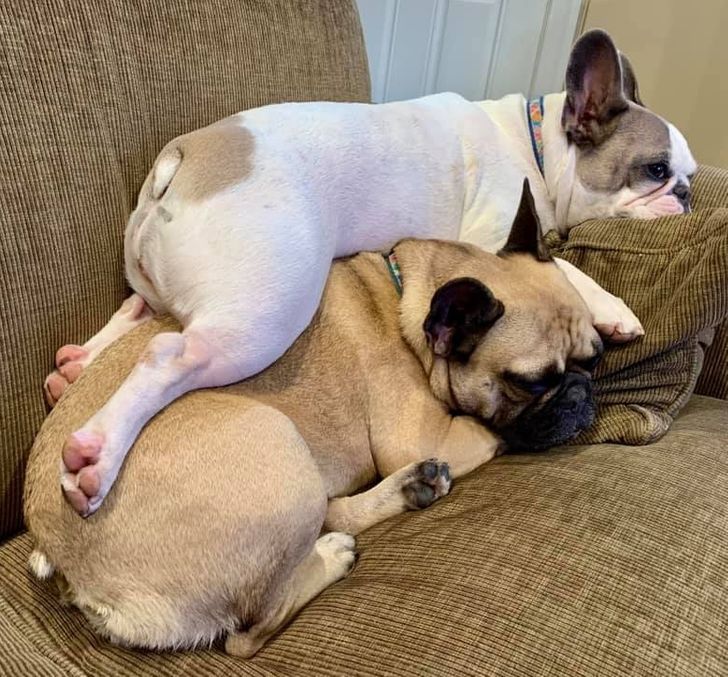 We don’t consider this habit of Trixie weird at all. It’s just her way of showing love and affection to her elder sister. Trixie definitely recognizes all the efforts that Frannie makes for her, and resting her fluffy her on elder sister’s back is her way of saying I love you sis and thanks for always being there for me. We will never stop supporting such bonds and we hope that you wouldn’t either

We hope you enjoyed this heart-warming story of a bond between two sister dogs. Let us know in the comments how you felt about it and feel free to share any unique experiences that you have encountered with your doggos.