Dogs have a very warped sense of logic.

Even though we always say that dogs can be quite intelligent when they want to be, However, sometimes that isn’t the case. It seems many dogs like to live by their own set of rules. And the logic behind these ‘rules’ is quite hilarious, to say the least. You might think that owning a dog means you have to feed them, take care of them, and take them on several walks.

And while that is all true, most dog owners spend a significant amount of time taking pictures of their doggos doing weird things. From trying to learn how to pole dance to asserting dominance over other dogs, the following doggos might be a bit different than most of their compatriots.

#1 I think he is learning how to pole dance.

I just caught my dog trying to climb up a pole.

#2 Just make the poor doggo a plate of pasta.

My dog is holding a single piece of dry pasta between her paws and eating it.

#3 Even drunk people make that mistake so I say he is fine.

He thinks this painting is a window.

#4 He wanted a snuggie so he made one for himself.

My dog chewed a hole in my blanket and then did this.

#5 That is much better than a dead animal.

My dog’s best friend is a brick.

#6 Look at those eyes! He just wants some snackos.

He saw us feeding the ducks and pretended to be one.

#7 At least he is happy and not freaking out.

My coworker’s dog got herself stuck underneath their shed.

#8 She just wants to be included in everything.

Every time we eat dinner my dog starts bawling, so we got her a chair to feel more included.

#9 He knows and he is probably manipulating you.

I can’t tell Tank ’no’ for anything in the world because then he does this and makes me feel like crap.

#10 He is just trying something new with his look.

Your dog holds their frisbee one way…mine holds it the ’special’ way.

My dog just pushed the door open, winked at me and left.

#12 Someone is bound to slip on that floor.

This is how my dogs sleep.

#13 I don’t think we needed the arrow but it’s much appreciated.

Reggie ran into the wall chasing his ball and he’s very proud of the dent he made.

I sent my dog outside as punishment for standing on the dining room table. This was his response.

#15 I think this dog is malfunctioning and needs to be reset.

My mom’s dog is watching me eat chips.

#16 He likes it straight from the source.

Even though he always has a fresh bowl of water, he sits there scratching the wall until I turn the water on so that he can drink it.

#17 Is he bathing in muddy water or drinking it?

This is how my dog drinks water.

When your dog has some dominance issues.

#19 He probably really like the color green and wanted to wear it on his head.

My dog chewed a hole through a ball and then wore it as a headdress.

My dog is too lazy to stand guard outside the bathroom so he posts his favorite toy there instead.

#21 The cold never bothered him anyway!

My neighbors complained that it’s too cold for my dog to be outside all day during the winter. I sent them this.

#22 Or she wanted a makeshift swing. 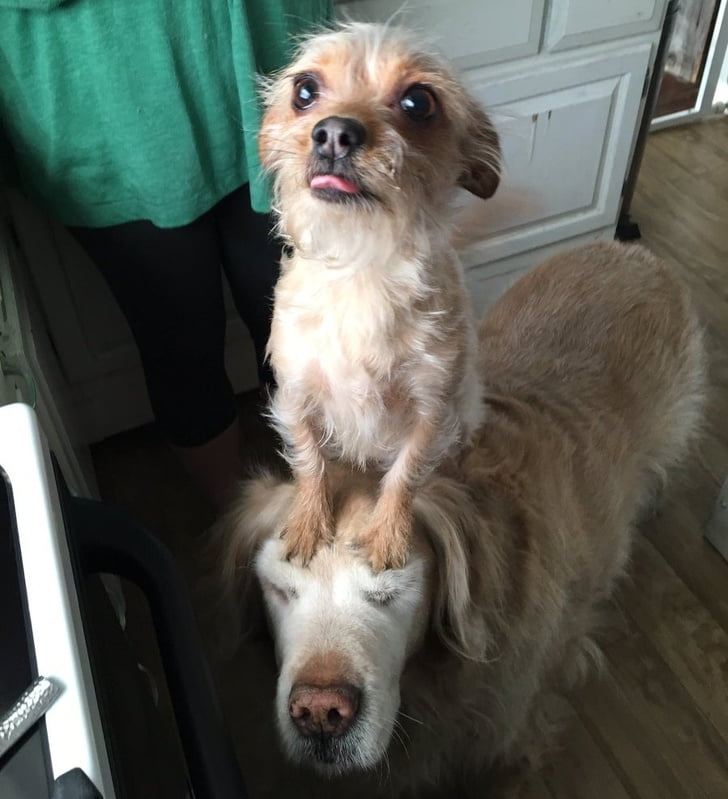 This is how my dog begs for food.

Does your dog do any of the above antics or something similar? Why don’t let us know in the comments below?