Karen’s are taking over the world.

You would think after so many years of people posting stories about Karen’s, they would learn to be better. However, the world is all-time high when it comes to dumb people with bad haircuts who think they know everything and nobody should speak a word against them. That is where this particular Karen came in. You see, it all started when OP got the job that Karen was pinning for as apparently she was the one who deserved it.

So rather than putting her head down and continuing to work hard, she started badmouthing OP to every one of her co-workers. I have no idea what she hoped to achieve but she did get what she ‘deserved’ at the end of the day. I have to warn you this is a long and twisty tale. So scroll on below and get ready to go on a rollercoaster of a ride.

For those who don’t want to read the whole thing but I recommend continuing on. 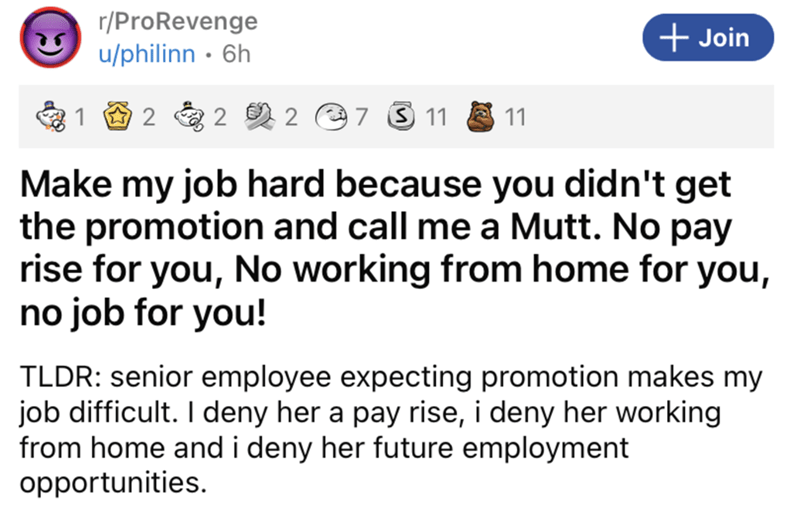 It was definitely a surprise for her but it was a good opportunity.

So she was quick to take it but it wasn’t all rainbows after that. 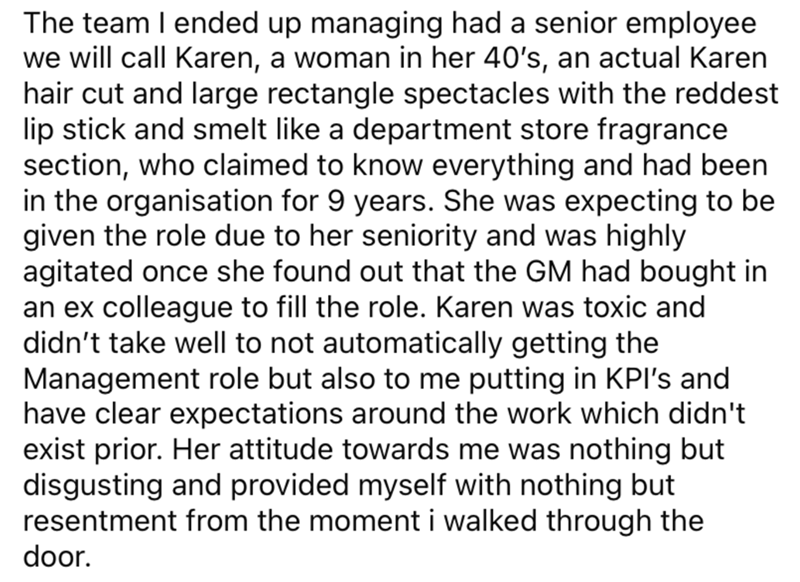 The aforementioned Karen was on her tail. 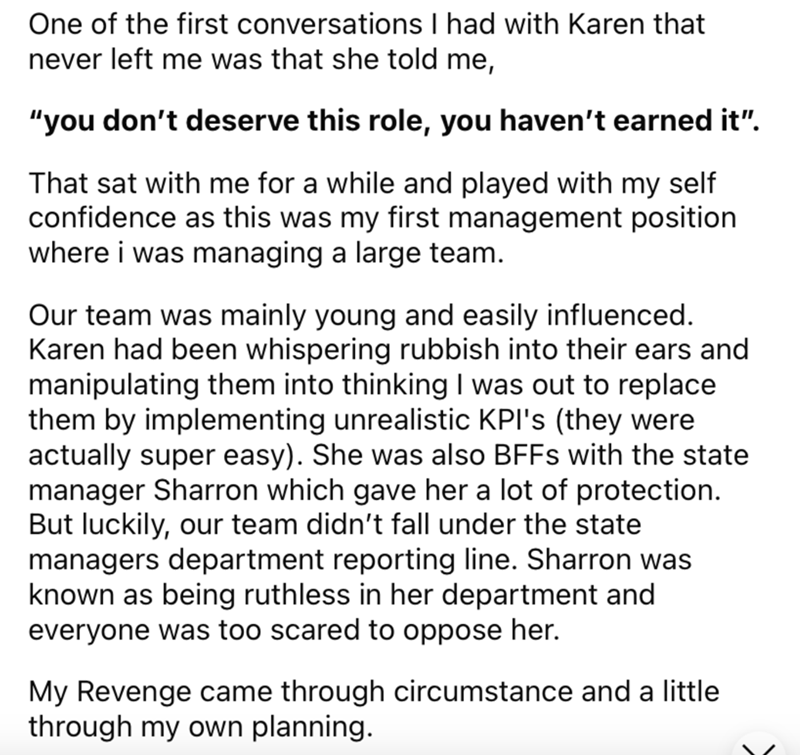 She clearly wanted their job so she tried to make it hell for them.

However, this is when they started documenting everything. 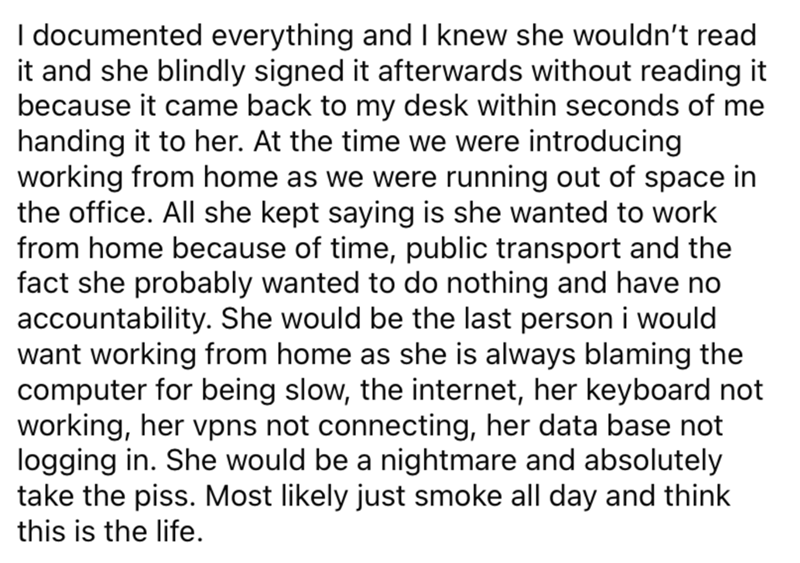 They knew they were going to need it one day. 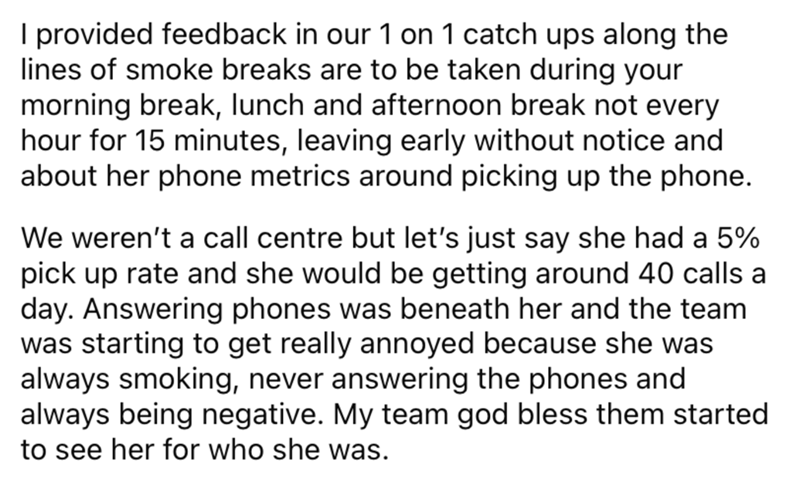 Although they continued to be honest throughout the whole experience. 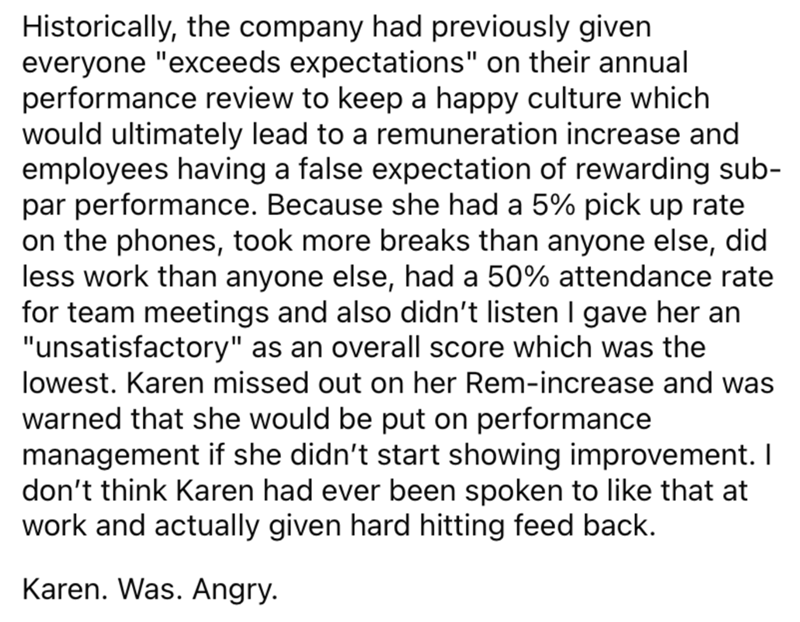 It’s the stupid ones that act out and have obvious shortcomings to write about in a performance review. There are many quiet and nice ones that are actually quite dangerous saboteurs. This is why managers need to appear fair and demonstrate above-board behavior at all times. –inspired_apathy 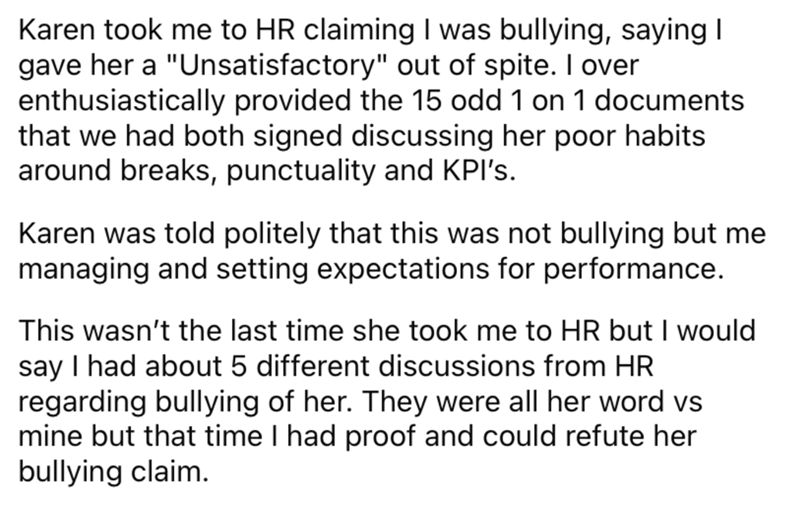 She hadn’t stopped her badmouthing even now. 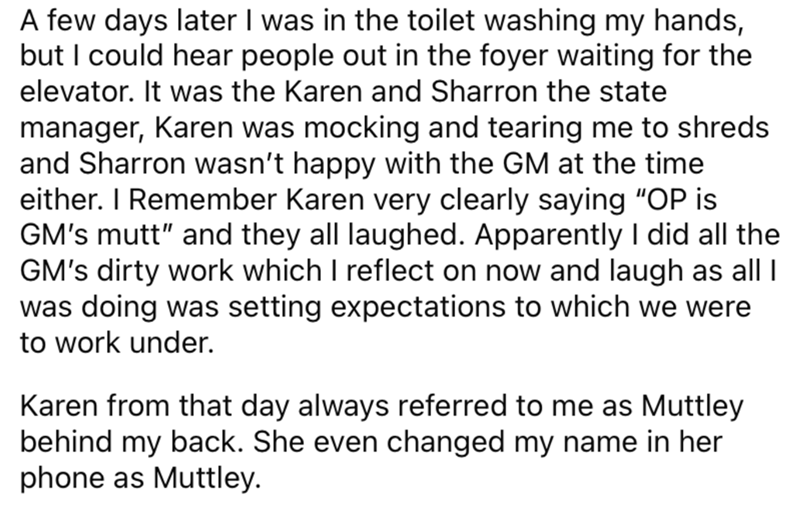 But this when a beautiful plan emerged. 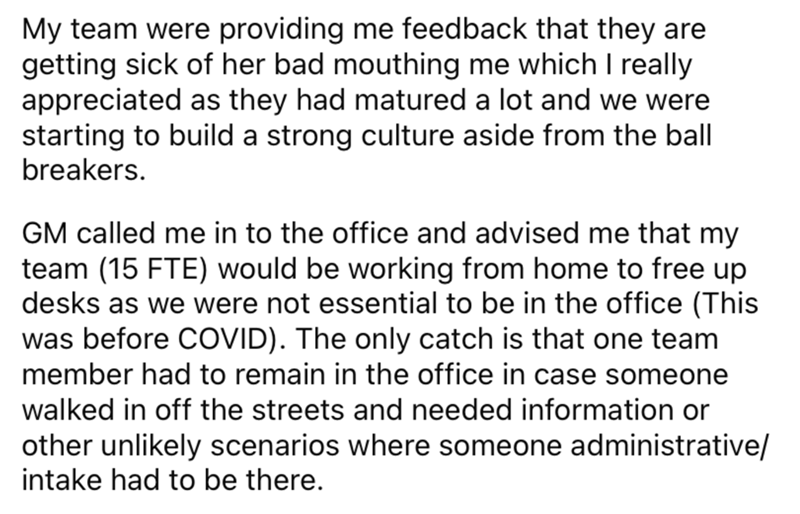 And they were quick to take it. 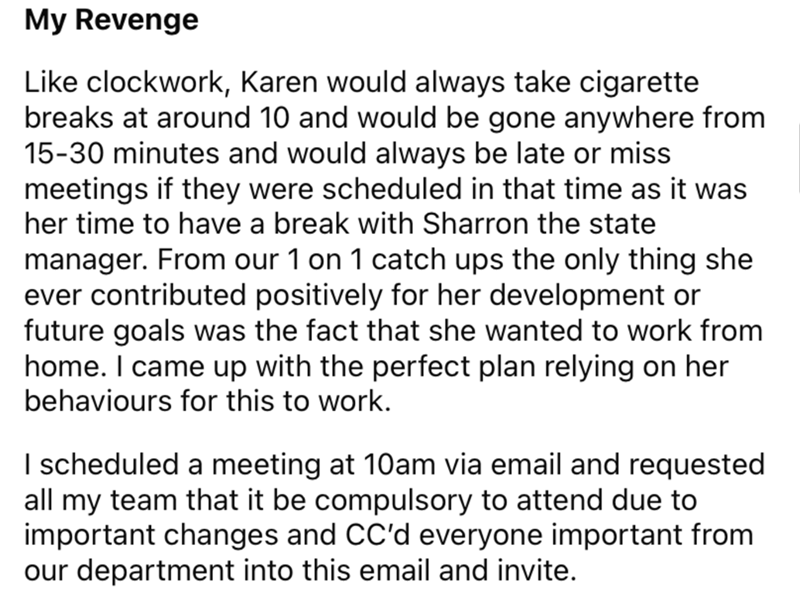 Karen tried to spin it in a way to make it seem like their fault. 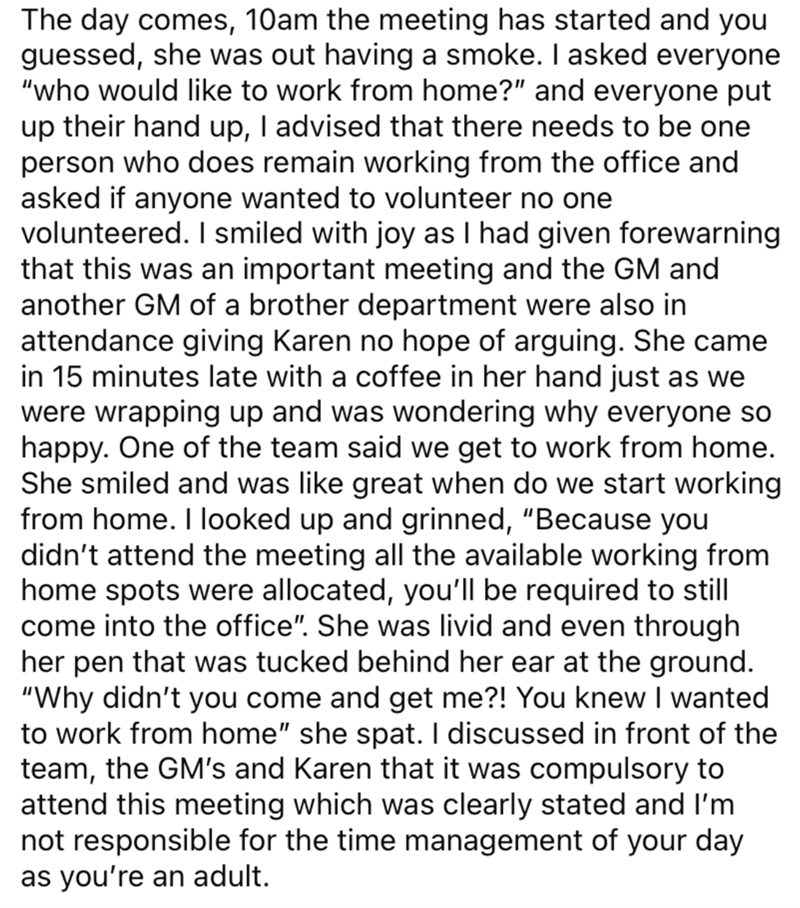 However, she couldn’t get out of this one.

But the story doesn’t end there as the revenge had only just started. 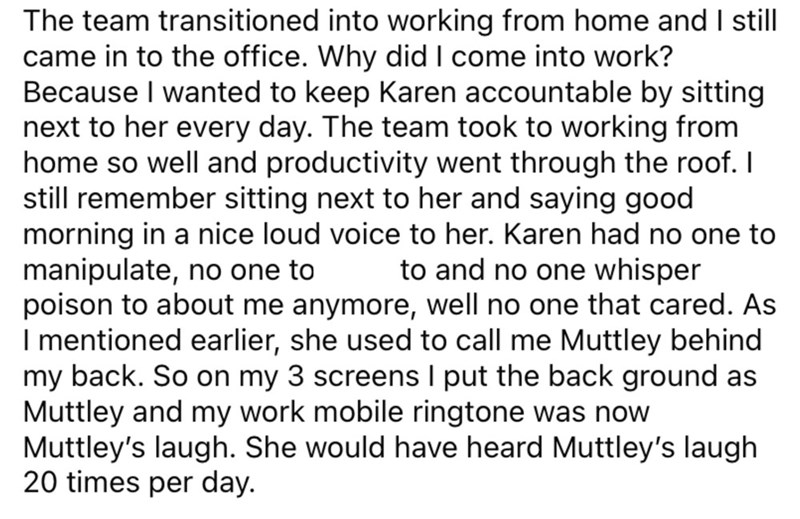 Things just continued to get worse for Karen. 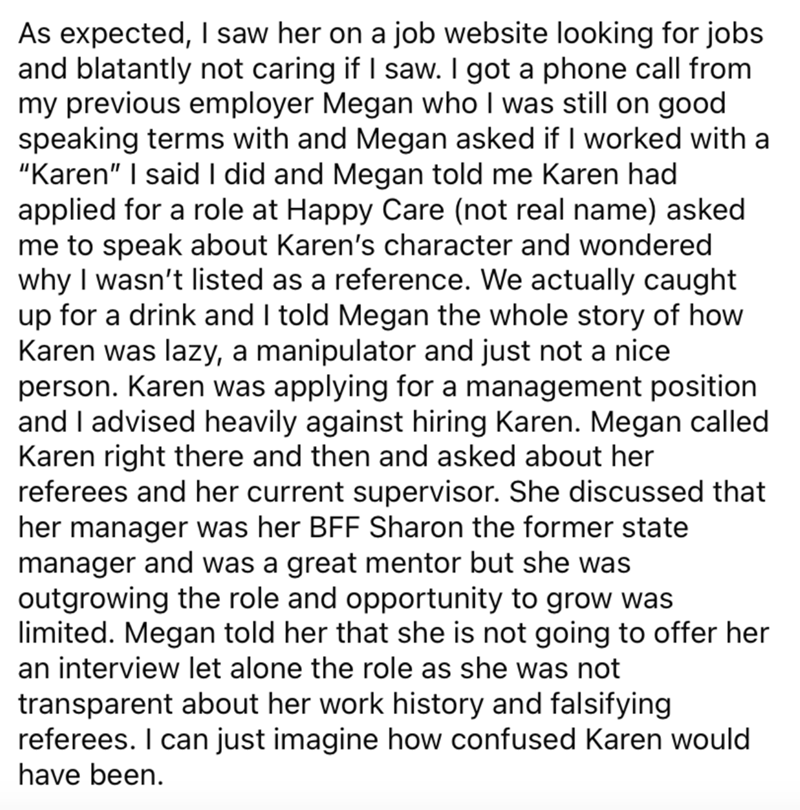 It seems Karma was finally getting to her. 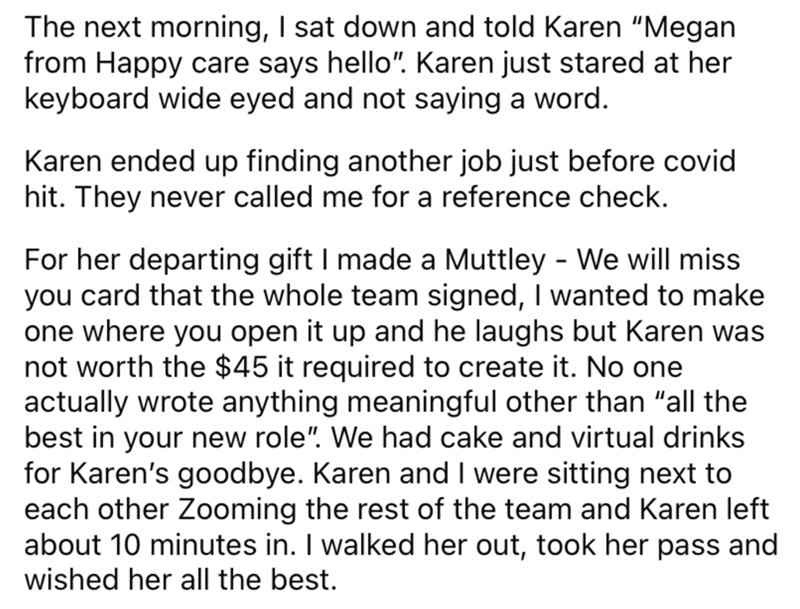 I managed that woman. It was horrendous. She walked on water and I swam through sewers. She spent more time trying to find ways to get out of work than actually doing her job. She trashed me so many times, my SVP asked if I wanted to leave and get a mega-payout and I took it.

Less than a month later, the guy who took my place couldn’t stand her anymore and had her fired. She immediately sued because she’s an entitled middle age horrible human being who happens to believe everything bad happens to her solely because she’s a woman. –DustyBottles

Last but not, least, the last statement was just salt on the wound for Karen. 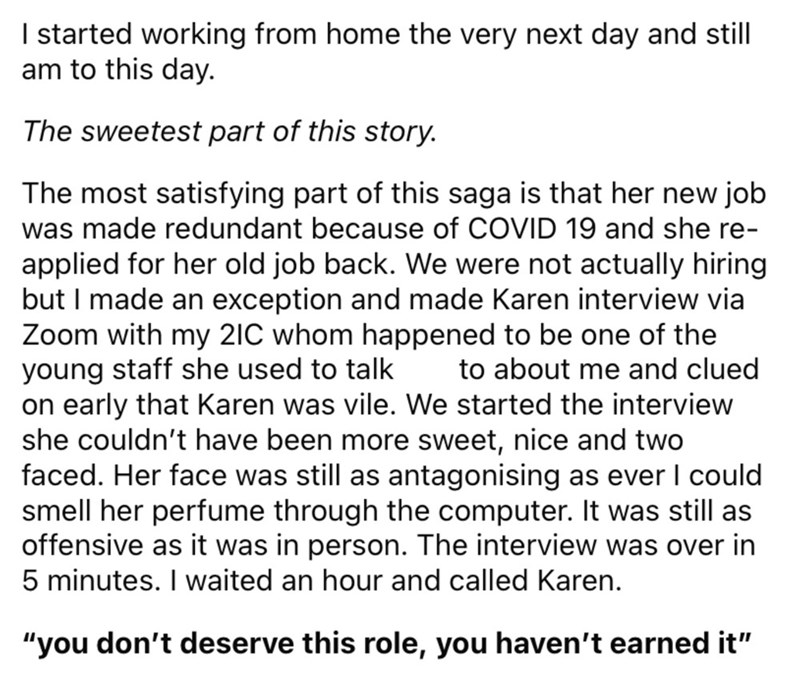 What did you think of this story? Would you ever go as far or spend so much time to make sure you got your sweet revenge? Let us know by commenting below.