Sea creatures are not easy pets to keep.

I know many people think fishes should be the starting point for when kids want a pet and parents don’t want to take care of other pets like cats or dogs. However, it is just a myth that fishes are easy to take care of. While they don’t make as much of a mess, they can actually die quite easily as we all know when our beloved Robins had to be flushed down the toilet. And this becomes exponentially hard when you talk about sea creatures that call salt or brackish water their home.

You have to spend thousands on an aquarium and can’t just throw them in a bathtub and hope everything turns out fine. That is what this woman thought though. She got angry when hee employee at the pet store tried to explain that she would need to set up a proper aquarium before she can even think of getting a starfish. But when she wouldn’t back off, the employee decided to give her exactly what she wanted.

This is something that happens a lot in stores similar to this one. 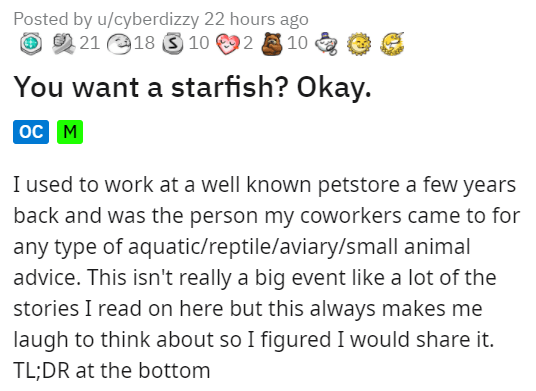 There are a lot of people who aren’t willing to do proper research. 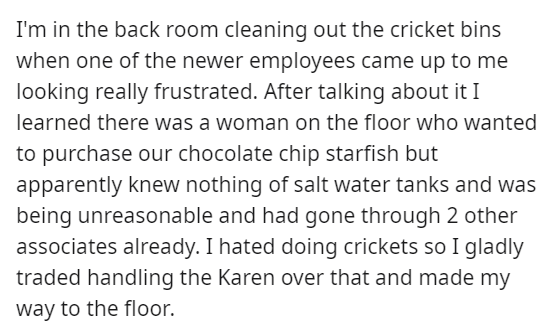 Before they commit to such a big decision. 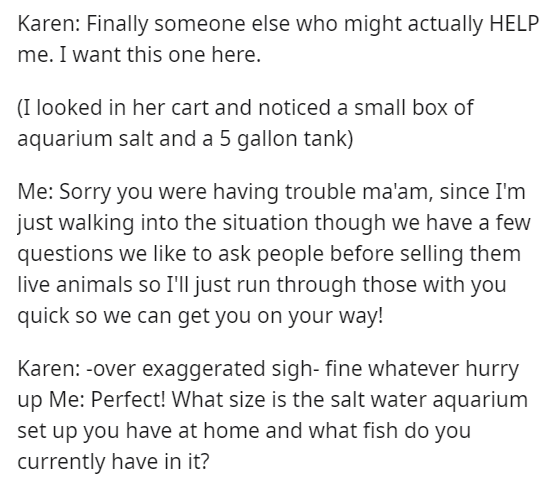 A quick google search would have explained how what she got wasn’t enough. 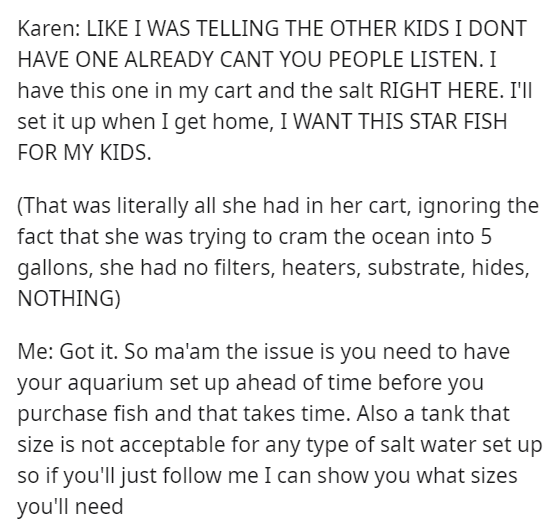 But she wasn’t willing to listen even when the employee tried to help her. 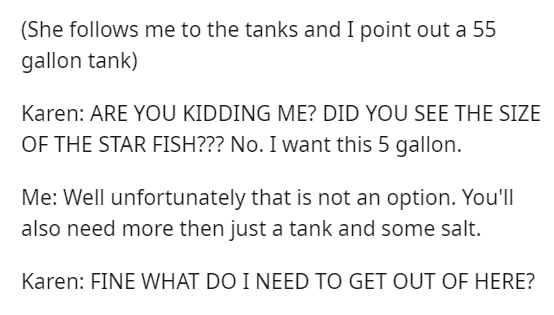 So they donned their best customer service voice and pointed out everything Karen needed. 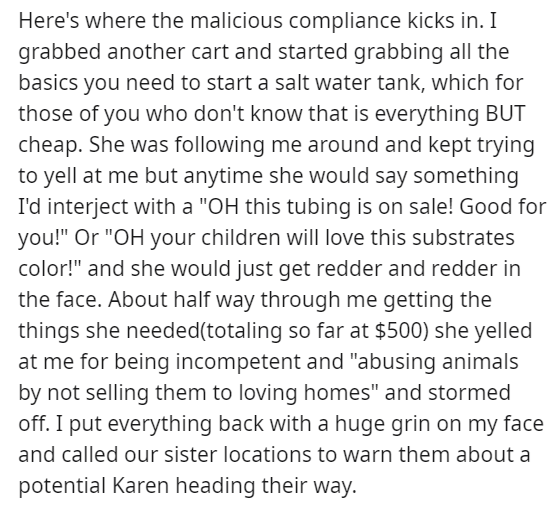 This might have taught her a lesson but I doubt it. 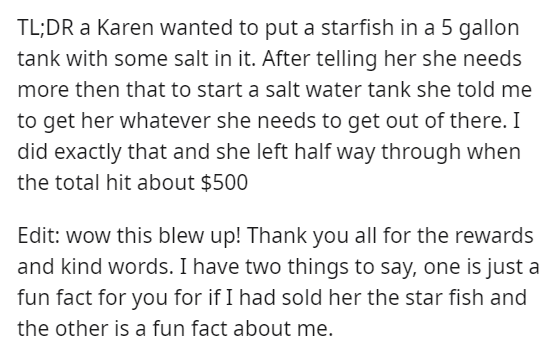 They also go on to explain why what she was doing was so wrong. 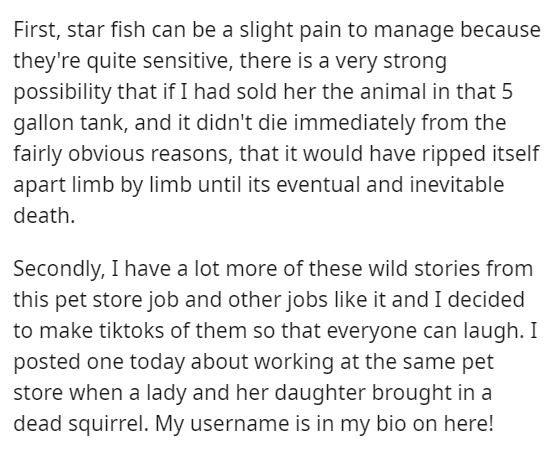 That’s another animal saved from a short life in Karen’s house, thank you! I volunteered in a reptile store for a while, having snakes myself. It’s unbelievable how many snakes end up dead, back at the store, or mistreated because people just don’t bother reading up on their animal’s biology, care, enclosure, food,…

They go “hey this will make me look tough”, they buy a snake, it gets aggressive because they put it in too small of an enclosure / don’t feed it properly / handle it wrong/ … and often the solution is to just toss it out into some park where it dies from the cold. It boils my blood, people suck. –SDeCookie

People in the comments were quick to share their own experiences. 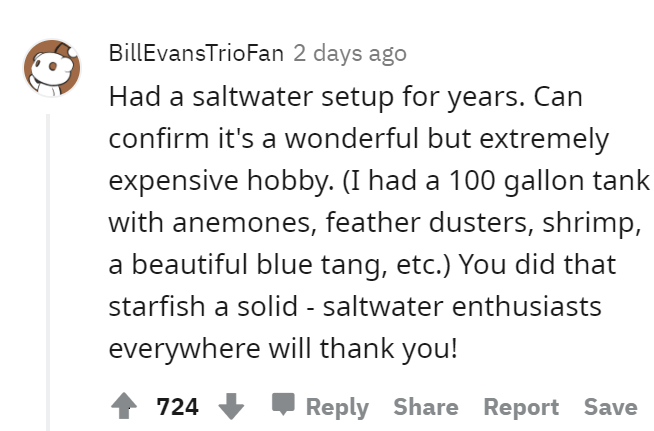 Some individuals think they can get away with anything they want. 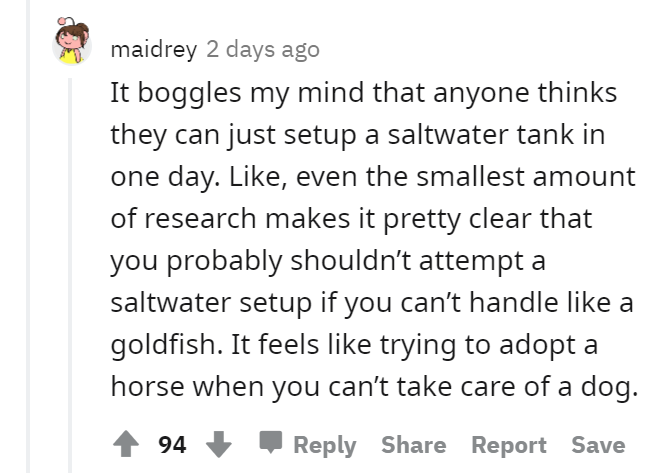 It is quite hard work to take care of most species. 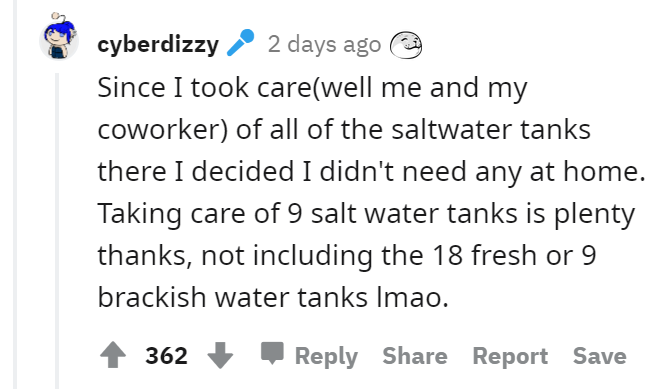 This comment sums up the woman’s mentality pretty well. 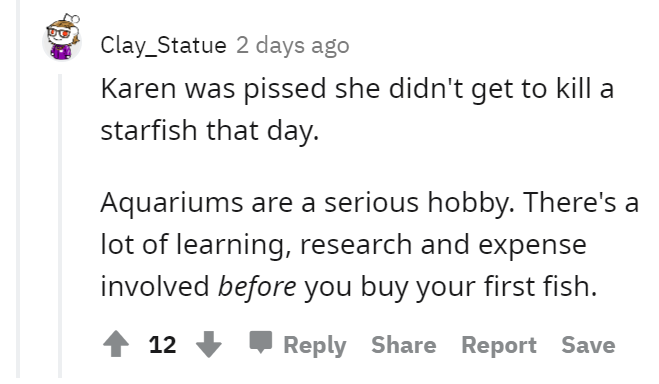 Some people should never be able to own a pet. 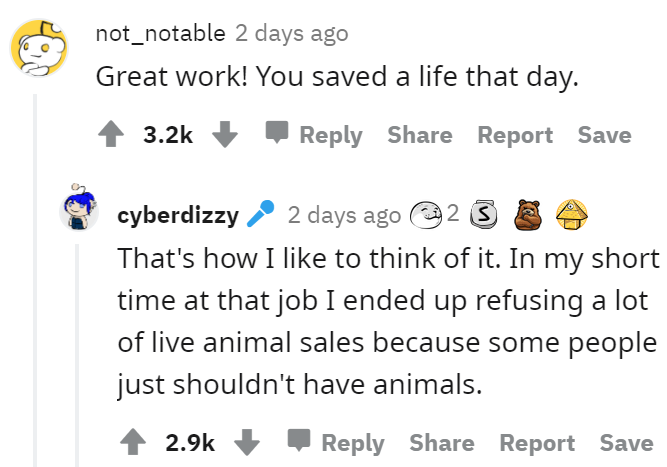 Other comments had questions of their own. 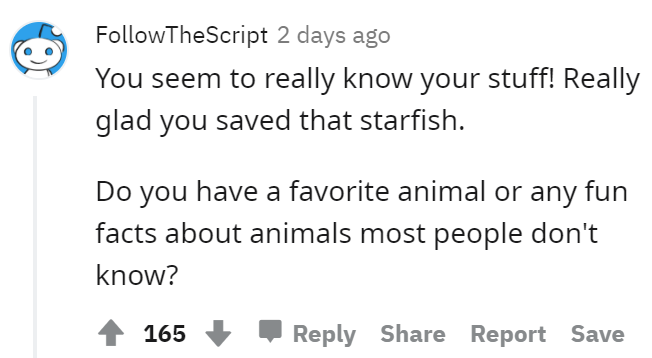 I could go on for ages haha. Recently(past 5 years) I’ve been pretty obsessed with dinosaurs and my current favorite is Therizinosaurus.

A fun animal fact for you though! The coelacanth is a deep-sea species of fish that was thought to be extinct until one was found in 1938, it has 8 limb-like fins and has eggs that are the size of a man’s fist. They were a huge scientific discovery and are still thriving today, meaning they have been living on our planet for a whopping 360 million years! –cyberdizzy

As this person puts it. It is an expensive hobby.

The littlest of things can seriously injure your pets. 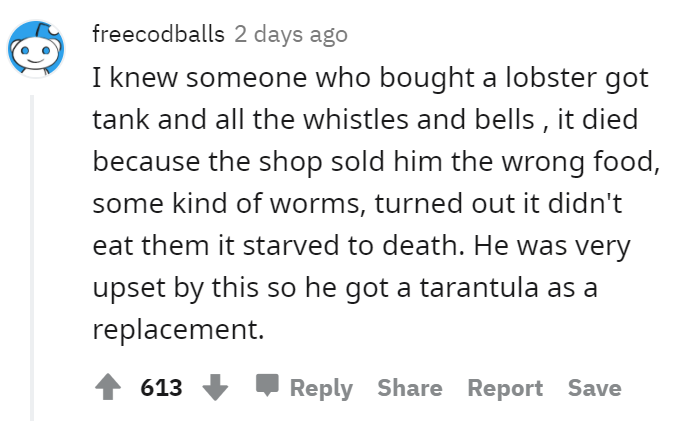 There is a lot of information floating around that might not always be correct. 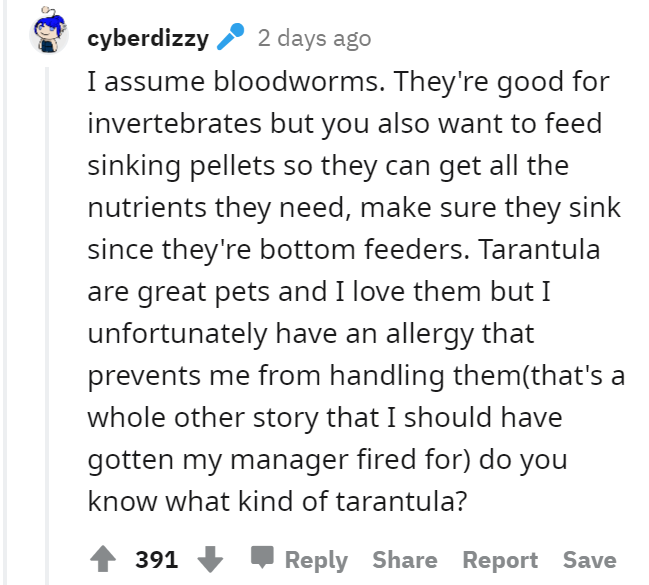 Do you have any sea creatures as pets? If so is it as expensive as these comments say? Comment down below and let us know.