Nobody likes a latecomer.

I mean I am a big believer in always being on time wherever you go whether it is just to meet some friends or when you are going to work. However, this doesn’t always mean that you can actually get there on time. Sometimes you might get stuck in traffic or there may be an emergency that makes you late. I am not saying that it is okay to make excuses for being late every day especially when it is your job but it happens sometimes.

Although it seems like the higher-ups don’t really understand that their employees are humans as well and that sometimes they may be a tiny bit late for whatever reason. Now, it is perfectly okay to call out an employee for being late but it is also necessary to be kind about it especially if they don’t do it often. Because if you berate them in any way, you might just end up with tasting the same medicine you gave them.

You will see what I am talking about once you scroll below to take a look for yourself.

Right from the start, we can tell that this wasn’t a fun place to work at and the management was horrible. 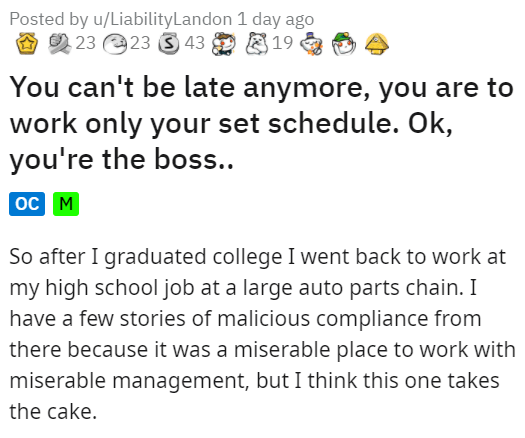 We come to understand that this person would stay late every day to help the manager close shop and he wasn’t paid overtime for doing this either. 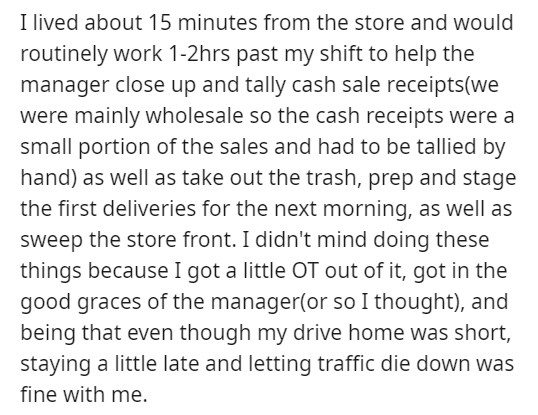 However, he was fine with it the arrangement until he was called out for being 7 minutes late. 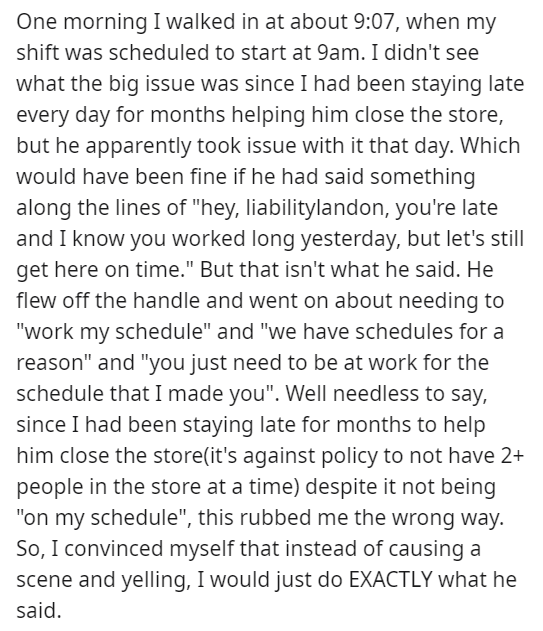 So he hatched a plan to do exactly what the manager had asked him to do and he stuck to the schedule perfectly. 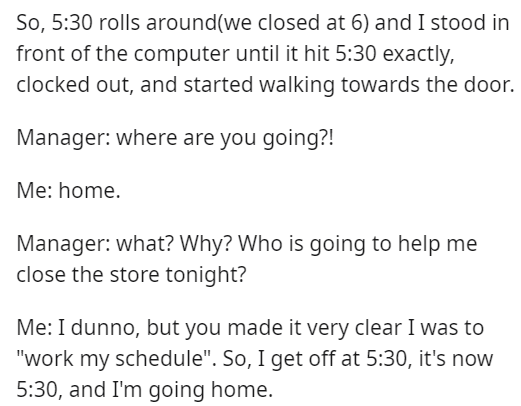 Unsurprisingly, the manager took him aside and asked for his help closing the store and agreed that it was fine to be a few minutes late sometimes. 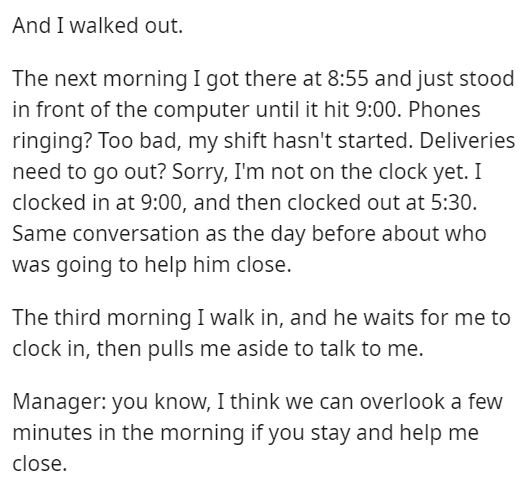 He didn’t apologize per se, but he did admit to his mistake which cannot be usually said. 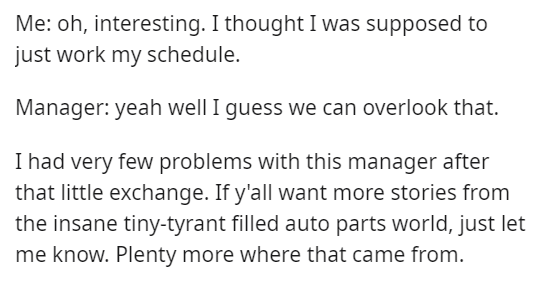 Honestly, I am surprised that the manager admitted his mistake because the higher-ups usually think that they’re always in the right and don’t really respect their employees. However, it still doesn’t make it right. He basically got angry over a few minutes when this person would stay hours late just to help him. Seems to me that he should have been given some leeway just for the extra work he did.

people in the comments were a bit surprised as well.

While others laughed about the stupidity of the manager. 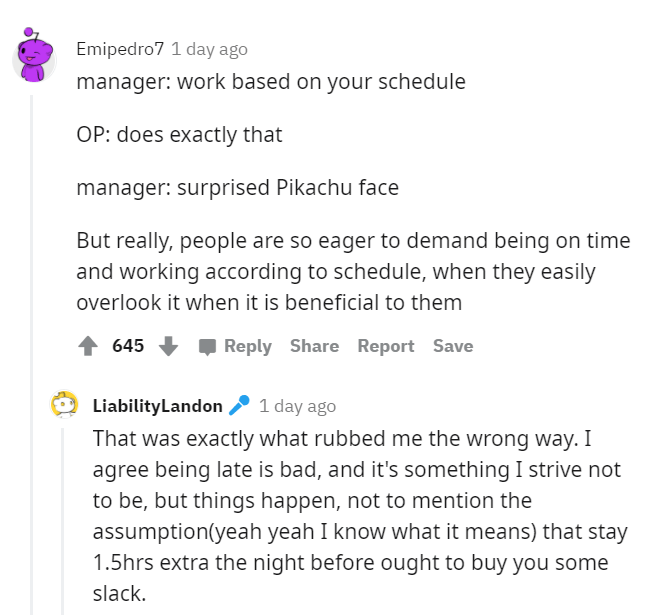 Others even shared their own experiences with management and how it is necessary to understand one another. 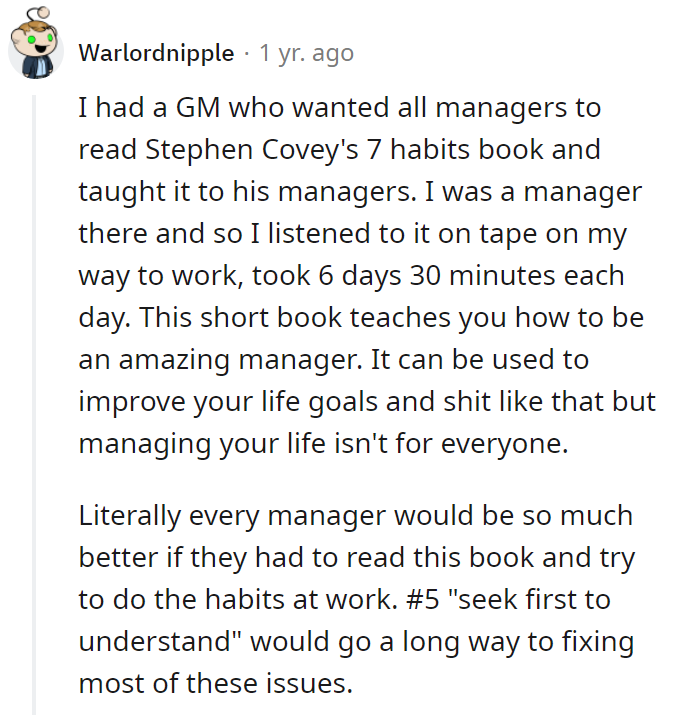 It is better to be humble and learn, rather than thinking you are always right. 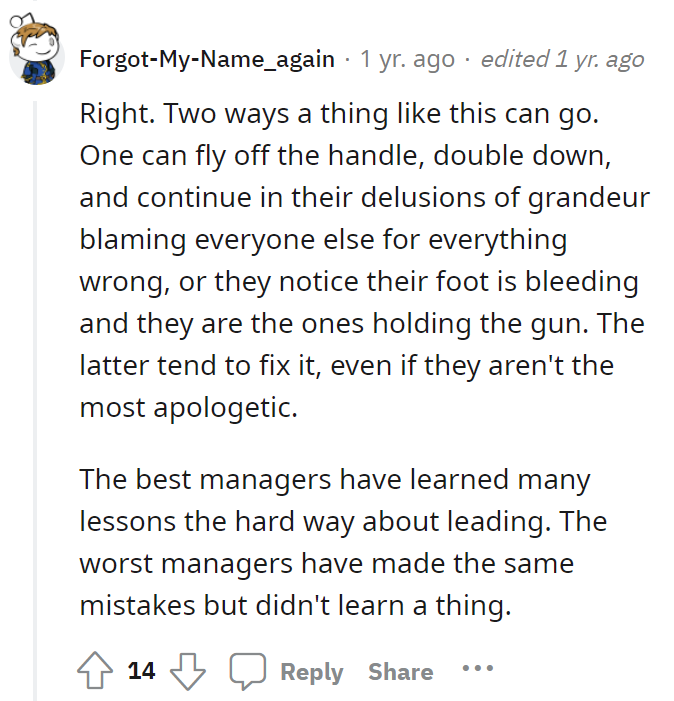 What did you think of the way this employee handled his manager? Have you ever done something similar when your manager was being rude to you? If so, how did it go? Let us know in the comments down below and don’t forget to share this article with your friends so they can join in on the discussion as well.