I understand that with subreddits like ‘malicious compliance’ and ‘pro revenge’ blowing up, people have been going to extremes to get the revenge that they think they deserve and sometimes this can get them into trouble. That is probably close to what happened in this particular story as this woman clearly thought she had done well and that she was going to get this man fired for micro-managing her.

Now, I would be the first one to admit that I might be biased against higher-ups and it is probably because I haven’t had great experiences with all of them but that doesn’t mean I would steal from any of them just to get them somehow fired. I understand that nobody likes to be micromanaged but if you do the job that you are paid to do, nobody will give you a second look. However, this woman was clearly not doing the work she was paid to do and this meant that her manager had to step in.

This not only angered her but also set her on the path of revenge which didn’t turn out well for her. You will see what I am talking about once you scroll below to read the whole story for yourself.

It seems a lot of people had storied to share during the pandemic which is fair in my opinion. 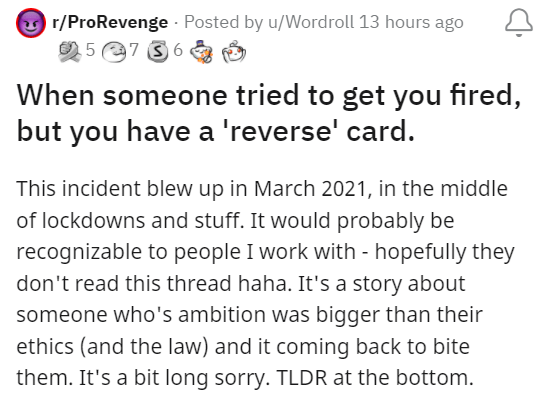 She was basically fresh out of college and thought she knew everything already. 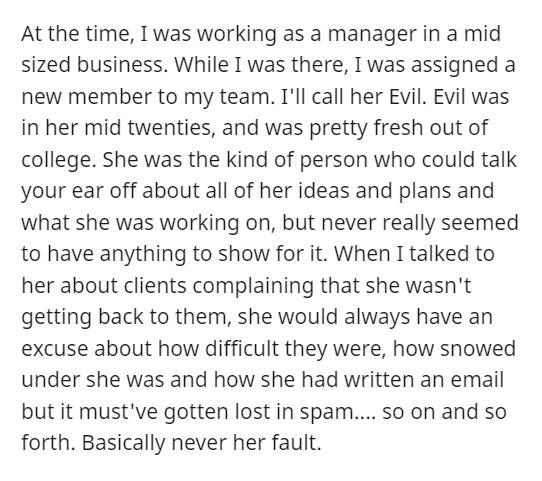 From the looks of it, the manager was just trying to set her back on the right path while also trying to be as unintrusive as possible. 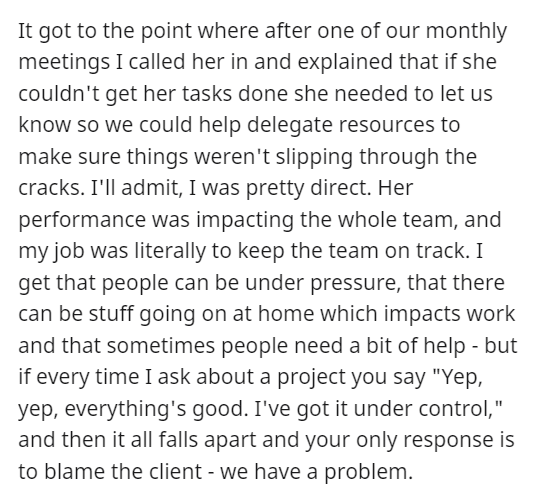 She apparently didn’t like any of this and decided to do something about it. 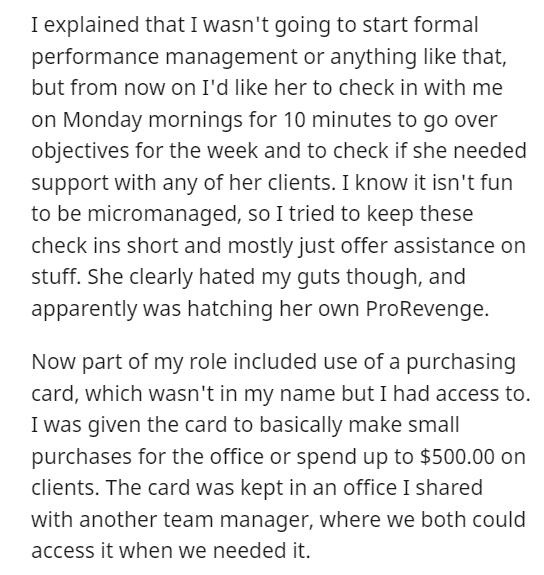 Soon enough, her plan was becoming clear as there were personal expenses on the company card. 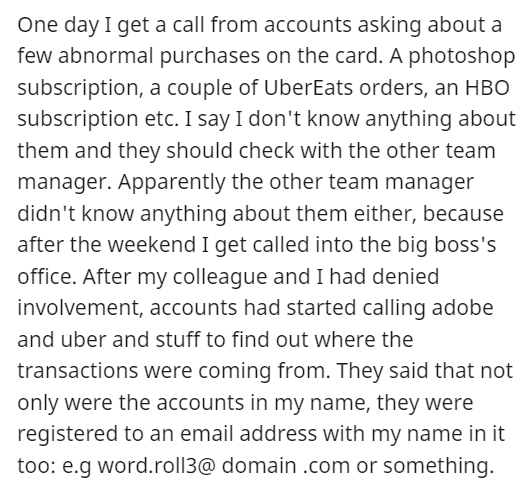 She had clearly done enough in her mind to get him fired and he was probably close to losing his job. 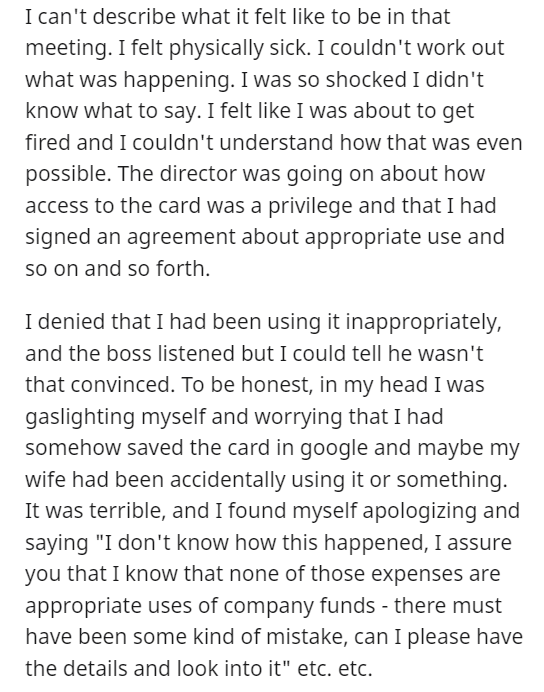 This is when things started to click for the poster and he realized that something was wrong. 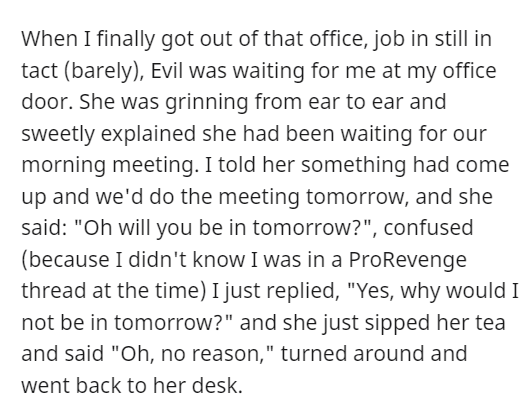 From the looks of it, she had clearly thought this through. And while I understand that she wanted to be there when the last step of her plan was completed, she did make it somewhat obvious with the grin and everything. And while usually, I am on the side of the underdog, this woman was stealing from the company and then pinned it on someone else. he could have gone to jail for what she did so this was not okay in any way.

She had stolen from the company and pinned it all on him just so she could get her ‘well-deserved’ revenge. 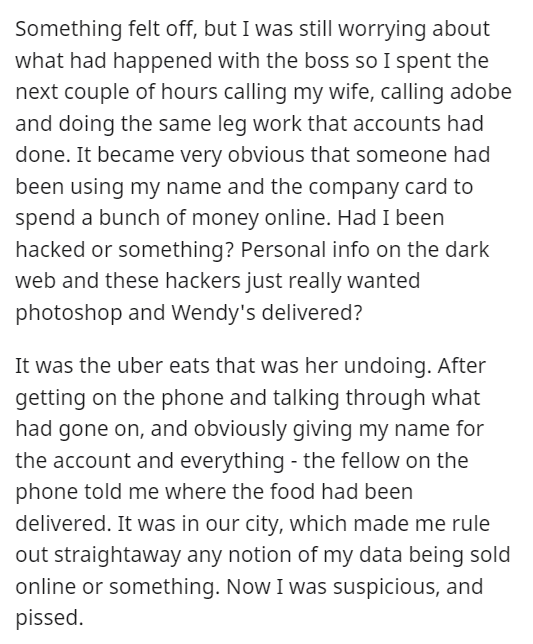 And while she had been smart with her plan, she wasn’t untouchable and she finally got caught. 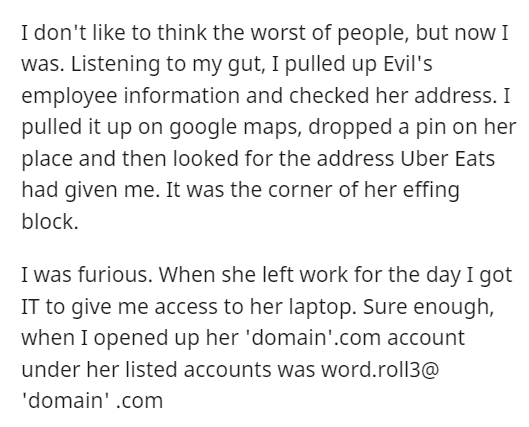 She also got to taste the same medicine that she had tried to give him before and yes, it was just as sweet as it sounds. 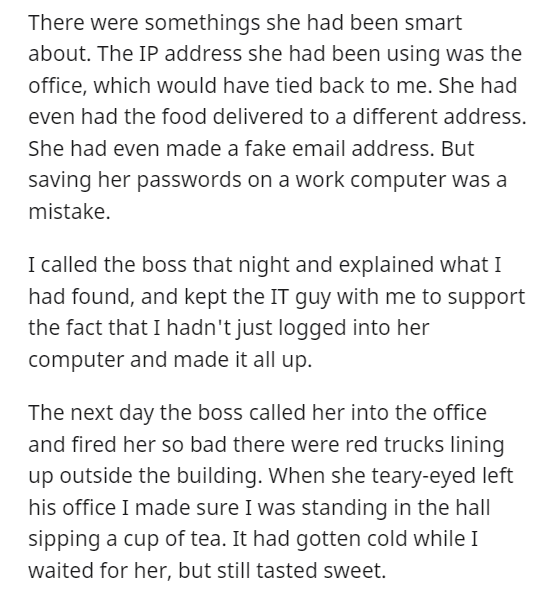 So, she got what she deserved at the end of the day and all was right in the world once again. 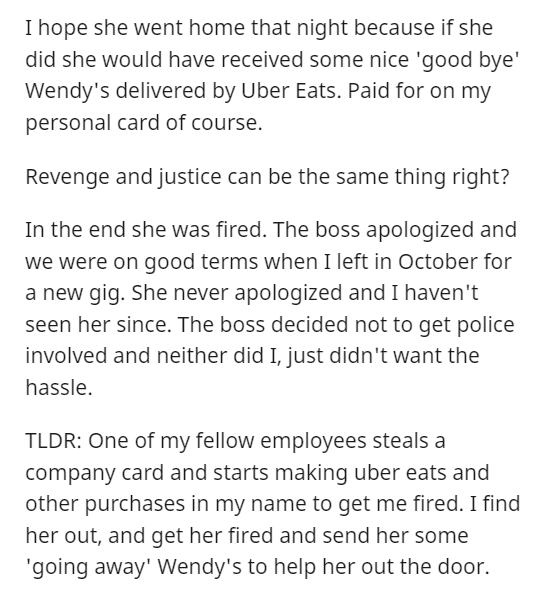 What are your thoughts on this revenge story? Do you think the woman went too far with her plan? Or do you think this guy is leaving out something when he talks about his own behavior? let us know your thoughts in the comments below. Also, don’t forget to share this article with your friends so they can join in on the discussion as well.