Many wars have been fought over pizza.

While I can’t name any right now, believe me, it is definitely true. After all, Pizza is one of the greatest human inventions when it comes to food. However, you are not here to read my blatherings about how much I adore pizza. You are here to read about some good old well deserved petty revenge.

I mean we all hate choosing beggars with a passion right? They love to take free stuff and they always do it too much that they annoy everyone else. I am not saying free stuff isn’t great but everyone should have some sort of self-respect but choosing beggars have none of it. And they will go to any lengths to get what they want including stooping quite low.

Not only is he a choosing beggar but he is also a plain bully. 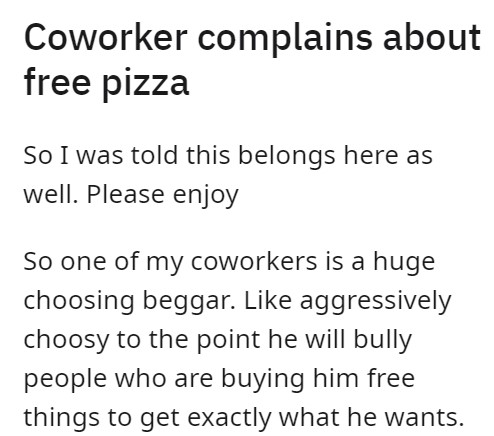 However, usually, everyone ignores his antics. Maybe that is why he has no fear. 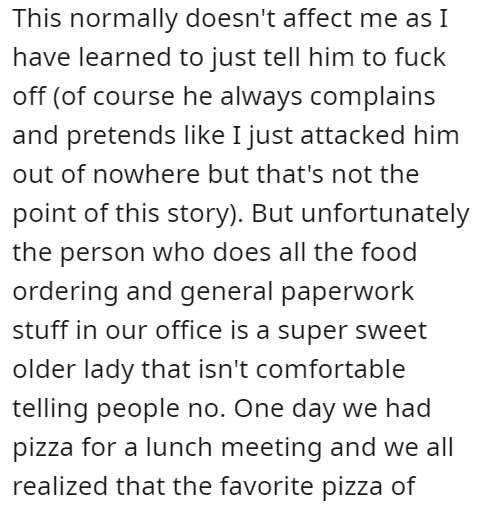 Even if it’s pineapple, free pizza is free pizza. He should be thankful. 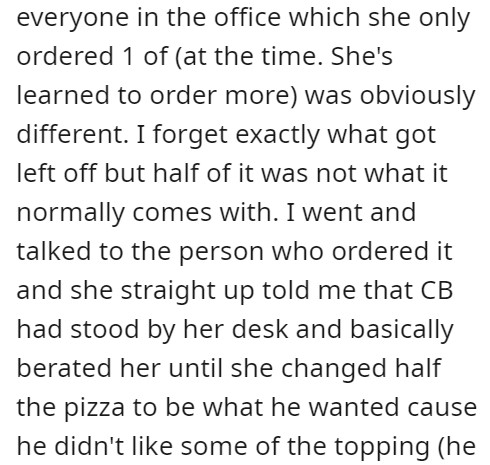 Other than acting with complete disregard for anyone else wishes, he also only wanted leftovers. 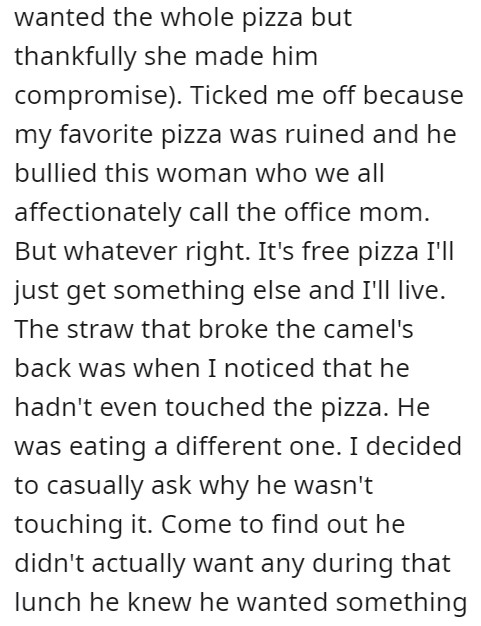 I mean honestly who does this sort of thing? 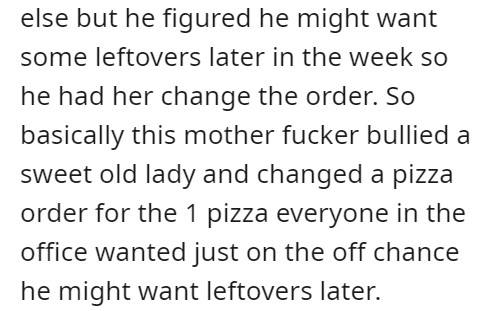 I’ve been in charge of some group pizza orders and I heard about and implemented something that prevents this exact behavior: Anyone wanting an unpopular topping combination (anything with pineapple) has to find a pizza partner.

They agree on whatever and I’ll order what they want. Then they eat that, and only that until it is gone. With a few other minor tweaks like making sure the vegetarians go through the line first, pizza doesn’t get wasted and people tend to be pretty satisfied. –FoxtrotSierraTango

I sure am glad that he didn’t get what he wanted so much. 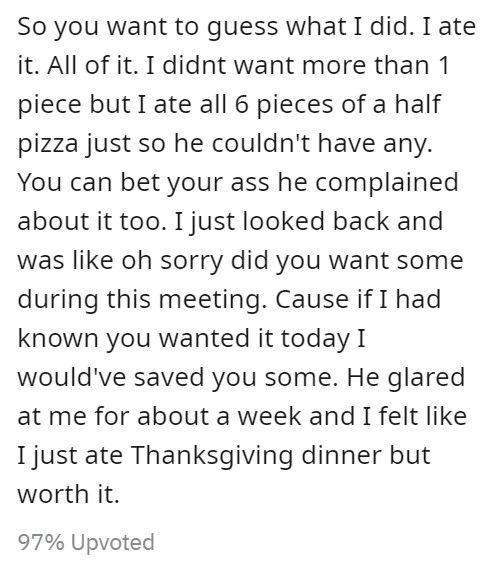 Unsurprisingly though, he didn’t learn his lesson. They never do. 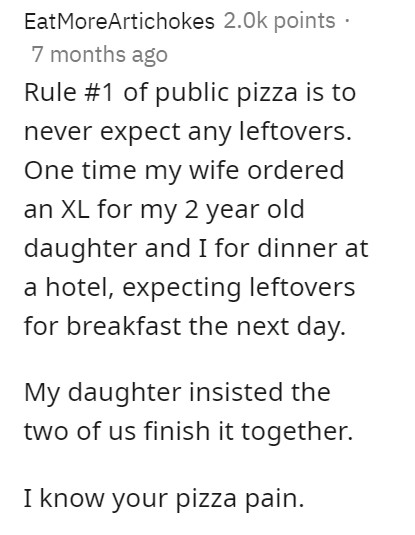 I don’t understand people who complain about everything. 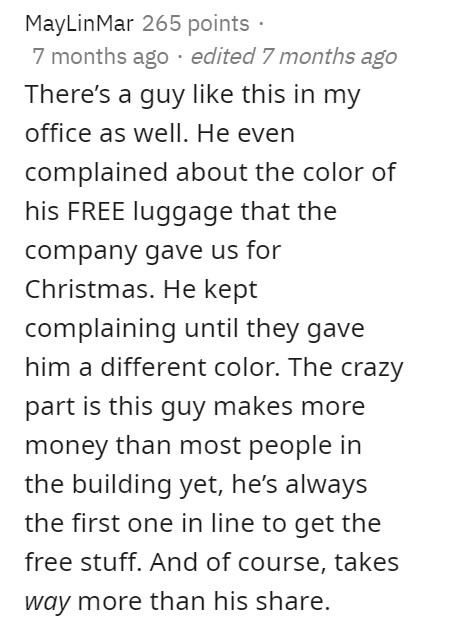 I love this lol I’m more passive in my passive-aggression, I would have asked permission to take the rest home (“Since no one at the meeting ate it”) or invited a group to share it with me.

But man do I adore that you ate it LOL I hope you did it in front of him, all the slices, in one sitting, staring at him and making “Mmmm…” noises while dabbing the napkin at your lips and staring him down lol. –C_Alex_author

Hopefully, that rotund worker gets their comeuppance as well. 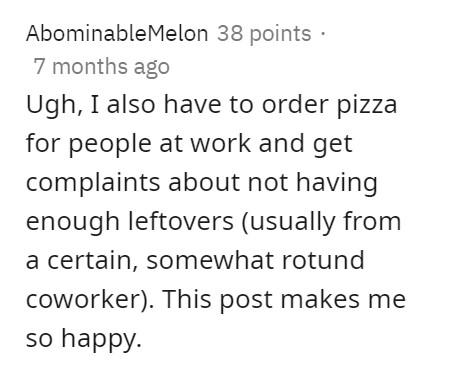 That sounds like something I would do and have done in the past. 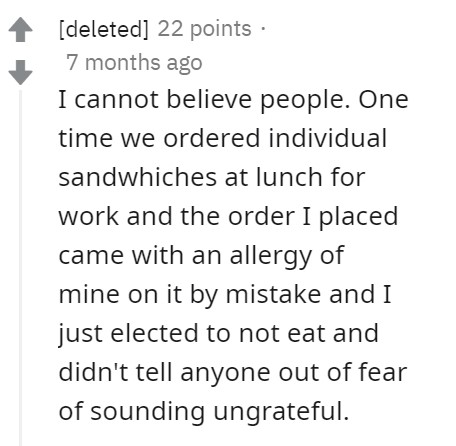 I would have loved to see the reaction on his face to that statement. 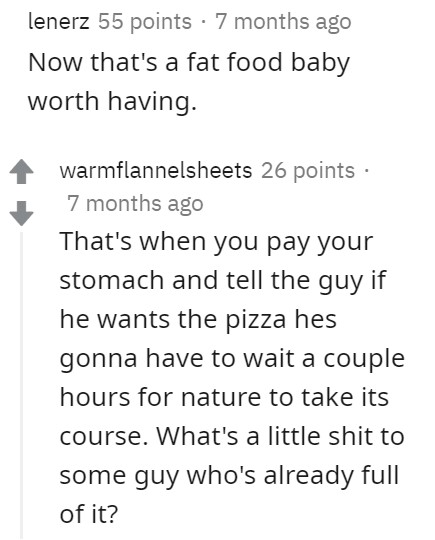 Have you ever done something similar to a co-worker you don’t particularly like? Comment down below and let us know.