There is no shame in being cheap.

Especially in this day and age when everything has become so expensive even though people aren’t even earning that much and a part of the overall population has lost their jobs. However, that hasn’t stopped choosing beggars or asking for so much more and trying to ruin other people’s businesses. We all know about those who ‘ask’ for free art. But there are many sorts of entitled people who think they deserve special treatment for some unknown reason.

And we aren’t going to let them go without shaming them. From crazy brides to insane people who think just getting free stuff is not enough. I mean, I don’t know about you but I feel weird even asking for some tissue paper at a restaurant when I have run out but these people apparently operate with no shame. And you can see some of the ‘best’ examples for yourself by scrolling below. Don’t worry most of them didn’t get what they wanted so it is all good in the end.

#1 I sure hope no one went to her wedding because that is what I would do.

#2 So this person not only bought stolen information but expects the person to give them the new password?

#3 I understand not wanting to talk at a massage place because you want to relax, but this behaviour is just rude.

#4 So everyone should do their job for free? How does that make sense?

#5 I can only hope that no one was desperate enough to respond to this job offer because this is criminal.

#6 I think I might have lost a few IQ points after reading this paragraph.

#8 If there is an insect in my drink, I don’t care how cute the kids are, I am not buying it.

#9 I would love to know about the place this person gets their ‘facts’ from.

#10 Do people think babysitting is easy?

#11 I don’t want to shame anyone but blocking someone because you can’t afford their services is just weird.

Everyone thinks they are entitled to something. Take respect, for example, people think they are entitled to everyone’s respect. But the fact of the matter is that you have to earn it but nobody likes to think of it that way. And there are definitely many factors that come into play when you talk about entitlement. Some people are like this because of the colour of their skin or where they live but that is another discussion for another day.

#13 The person is giving away free shelves and people are still not happy.

#14 Honestly, what did they expect the seller would do? Give them an alive knife? 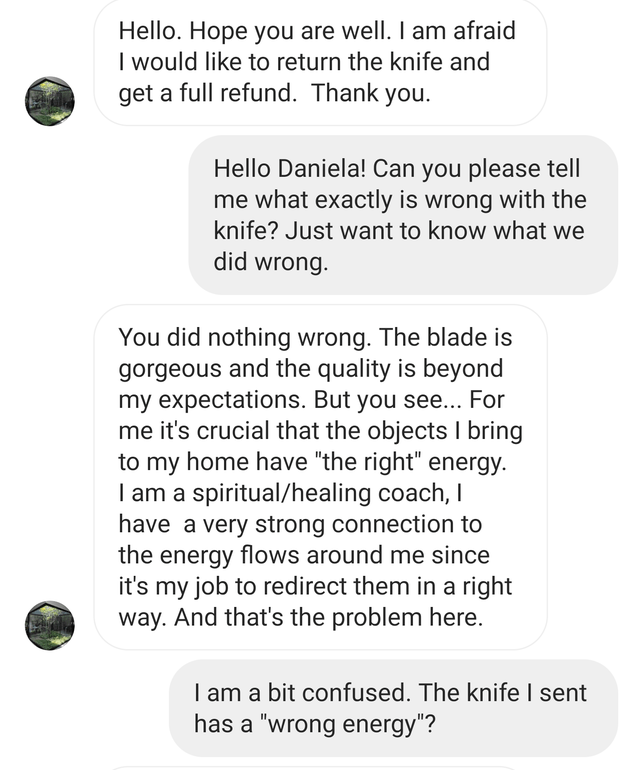 #15 Honestly, removing the packaging so you can sell it for cheaper is a genius idea.

#16 They are in the military and yet they do this?

#17 I understand being married is hard but this is hilarious.

#18 It is as if they own the place or something.

#19 Hopefully she learned a lesson from this exchange.

#20 Do people not understand the difference between hand-made and mass-produced?

#21 Be warned as you will get dumber with each line you read.

Have you ever had to deal with entitled people? If so, let us know your experience in the comments below.