This Karen went crazy for not receiving replies on time.

Ideally, a person who is right should be calm, and patient. They know they haven’t done anything wrong so why would they react in an obnoxious way or go crazy, right? If you apply this logic to Karens, the world’s most entitled women in the world, they always feel they are right. They have this highly inflated ego that blinds them good enough to believe everything they do is right and everything they say is correct. Knowing that they are correct, why do they instantly go crazy when somebody challenges what they are doing or saying? Well, that is because they are never right and it takes very little to trigger them. This shows their sole purpose is not to make everyone believe they are right but to infuriate the other party. God knows what joy they find in this.

A Karen going crazy for a tiny reason is very normal but a Karen going crazy for no reason is something you don’t see every day. Today’s story is about a Karen who was in the mood to buy something off of Facebook Marketplace. It was a nice dining table set that she wanted and contacted the seller to finalize a deal. The woman instantly went crazy upon receiving late responses and suddenly went all out on the seller for literally no reason.

The rest is for you guys to read. This one really is a hilarious story! Scroll down below to enjoy.

1. Karen approaches a seller selling their dining table set with chairs on Facebook Marketplace. She wanted to negotiate a lower price as she lived far away and picking up the set would make her incur a transportation cost. 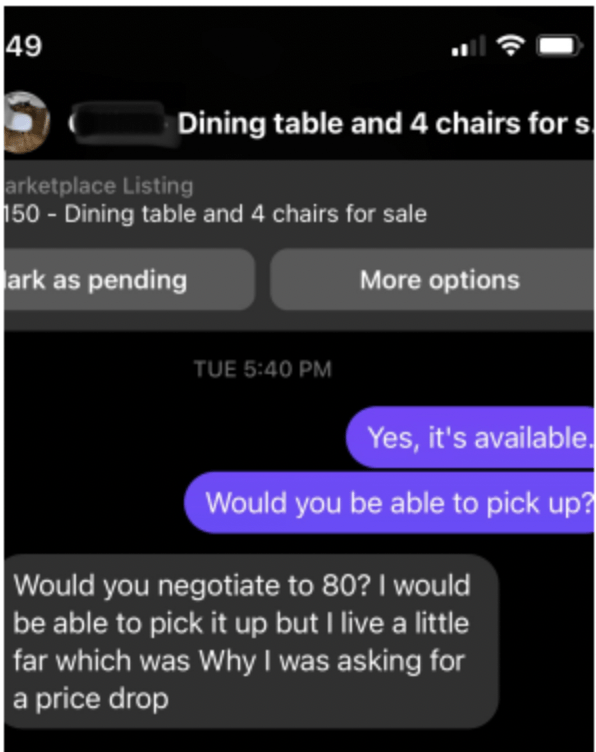 2. Seems like Karen had absolutely no patience and showed signs of anger as the seller didn’t reply to her as quickly as she wanted them to. 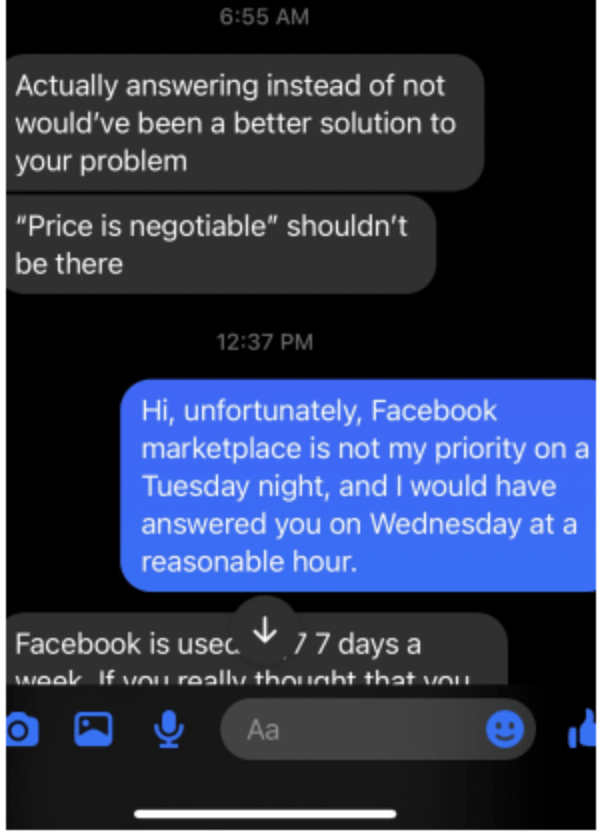 3. Knowing that the seller has told her they were busy on Tuesday, she still somehow tried to make statements to make them look like a bad person. This woman needs to chill. 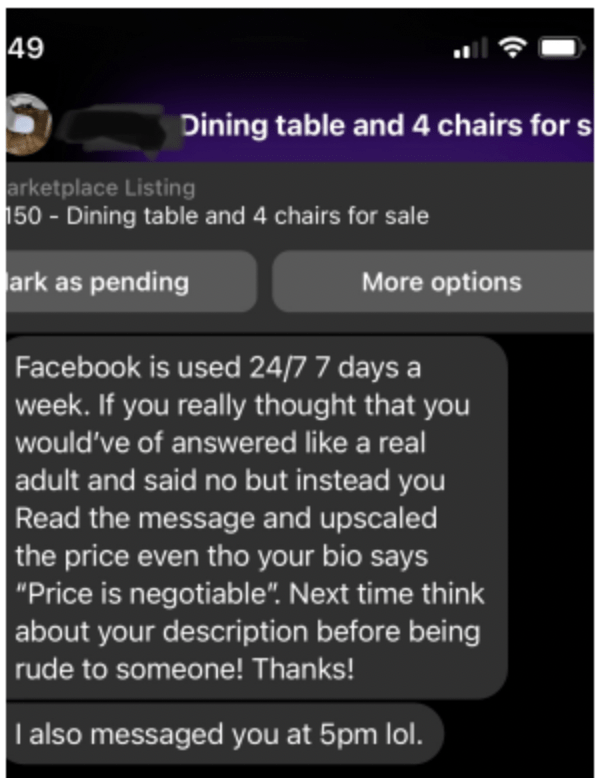 4. This is a lost cause. She is still trying to self-generate a situation where the seller purposefully didn’t reply to her. 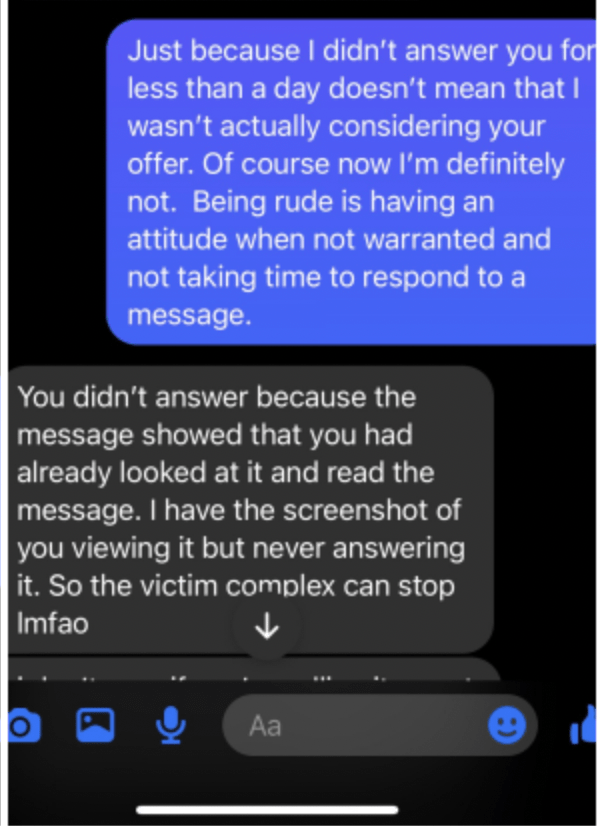 Is this Karen even hearing herself? She is literally ignoring the fact that he has her considered and continues blabbing about him ignoring her. Who even is she? Why would the seller even feel the need to ignore her? It’s not like she is Queen Elizabeth or a president or someone. That’s the matter actually, their entitled mindset actually makes them believe they have that sort of authority and position. Unfortunately, Karen, that is not the truth. If you feel like the seller is giving you late replies, just move on and find another seller. There is literally no point in stopping and trying to make a point that is irrelevant and incorrect. God, when will Karens learn they are only wasting their own time?  Never.

5. This lady found a better one at a lower price and is still wasting her own time in this chatroom. She has lost her marbles. 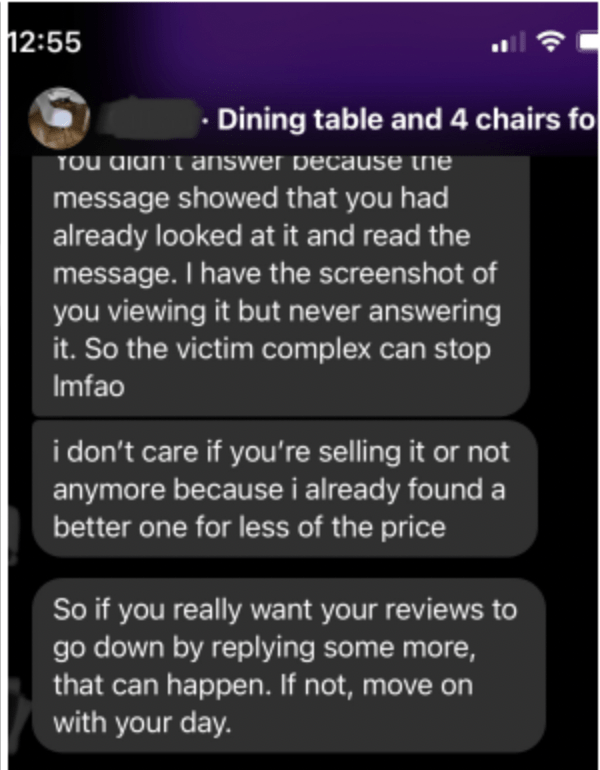 6. Karen proved her case to a wall. The seller never responded to any of her texts and this would definitely give her the dark thought about being ignored while having dinner on that new, cheaper dinner table that she got. 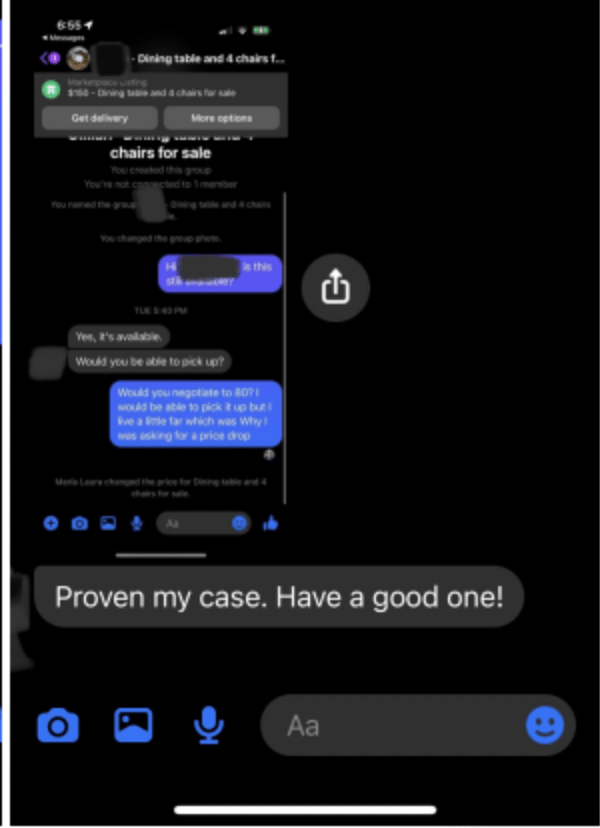 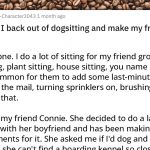 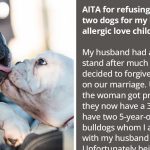 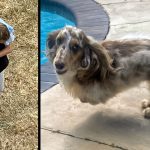 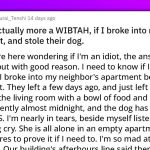 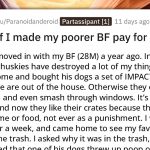