Clowns are scary. There is no way around it.

I don’t know what it is about these clowns. They scare the living hell out of me. Even after knowing that it is a gimmick, a persona. Yet, it still creeps the sh*t out of me. What surprises me is that many don’t get scared. They don’t even flinch when a clown comes closer. But for me, I believe the fear is associated with the past experiences that I’ve had with these ones. First of all, it’s the heavy makeup, and on top of that, it is super white which makes me think they are ghosts. Next up, I don’t know how but they select men and women tailor-made for the role. Their faces look kinda slender and that scares me a lot.

Today, let’s see how much of the clowns you guys can handle. Wasn’t an easy one for me to curate, but anything for yall. Trust me, it’s that fake smile that gets you. And every single time it makes me feel like clowns are the saddest creatures on the planet.

Anyways, are you guys ready? Scroll down below for some creepiness and feel free to share this with your friends to enjoy together.

1. This is “He”. A creepy clown played by Lon Chaney in the 1924 silent movie ‘He who gets slapped. A masterpiece of its time directed by Victor Seastrom. 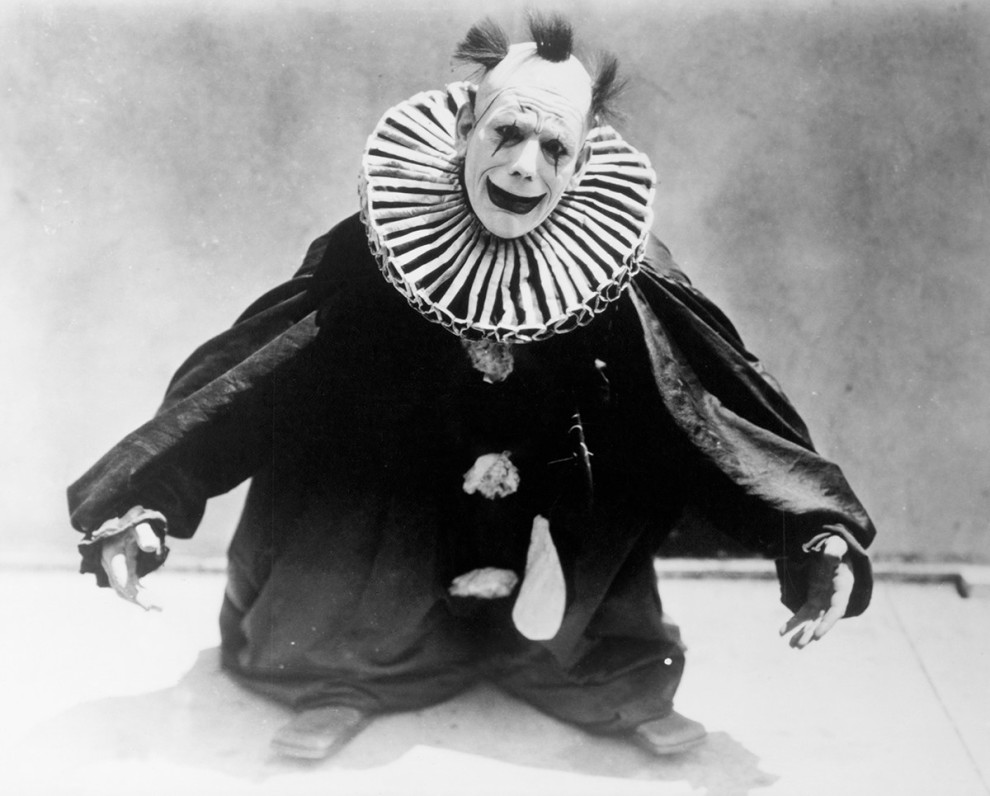 2. A photographic carte-de-visite of the clown named ‘GL Fox’, taken at Sarony studios in New York City, circa 1870 (left). Photograph of an unnamed clown posed in Glasgow, Scotland, circa 1885 (right). 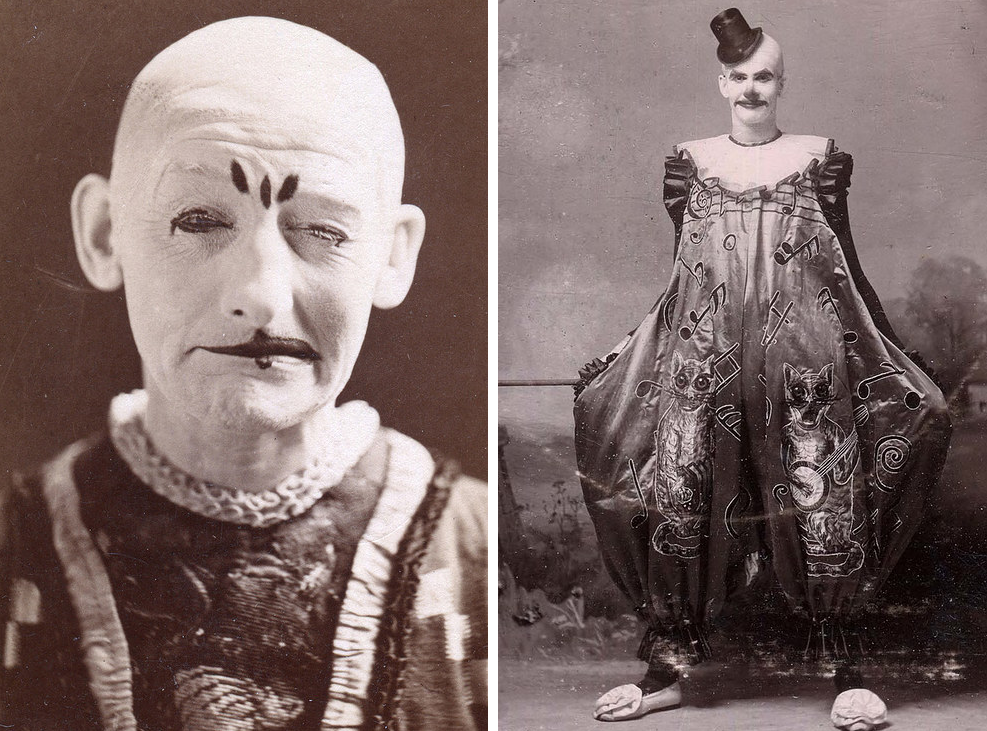 3. The kid got traumatized by riding a miniature horse during a circus that they came to a children’s hospital, circa 1930. The clown smiling to his left is definitely not helping. 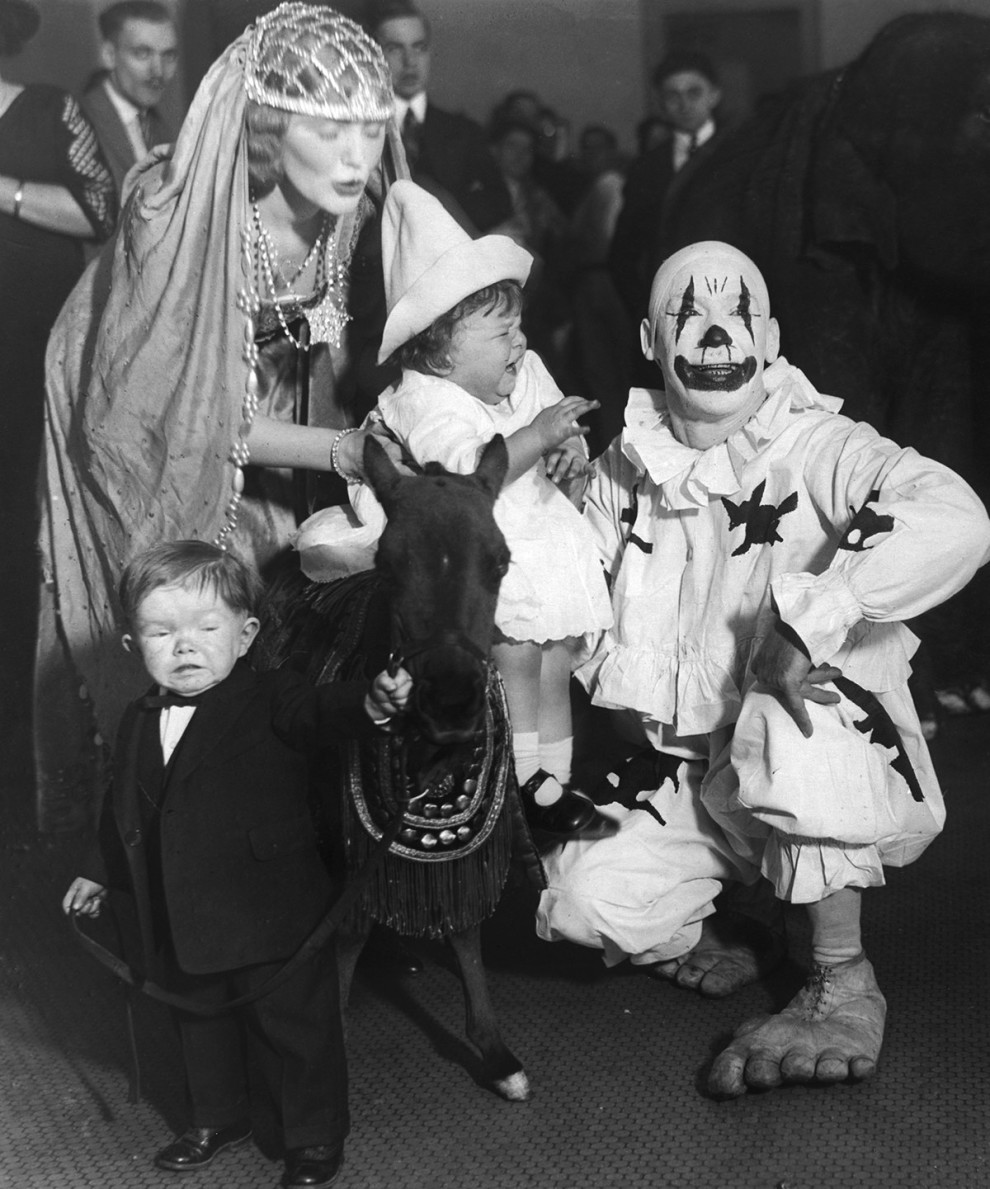 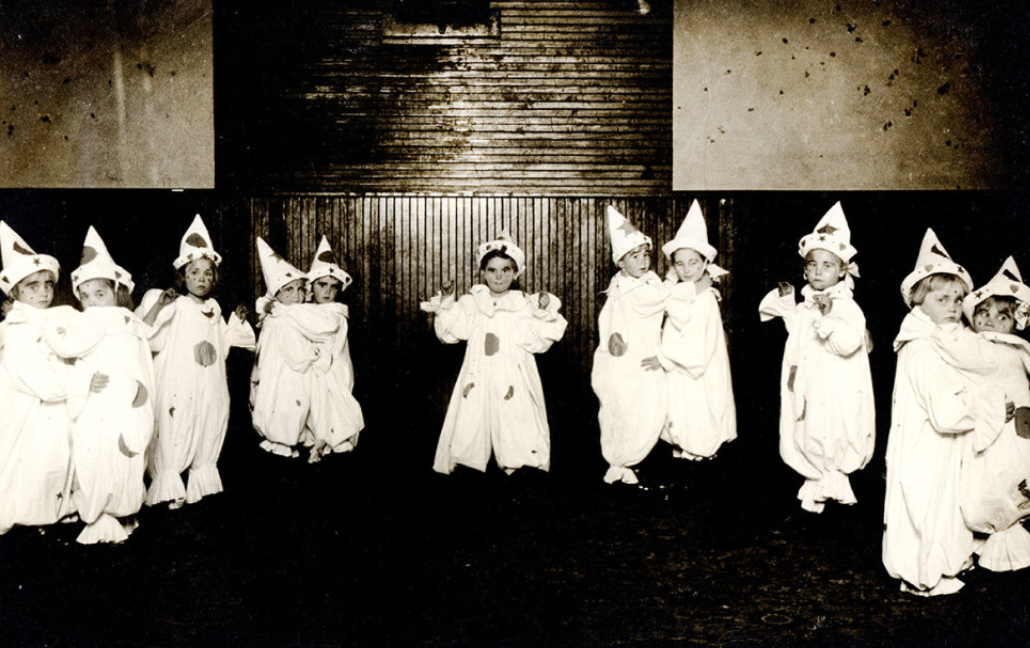 5. Spain the comedian clown with three of his clown children. From 1937. 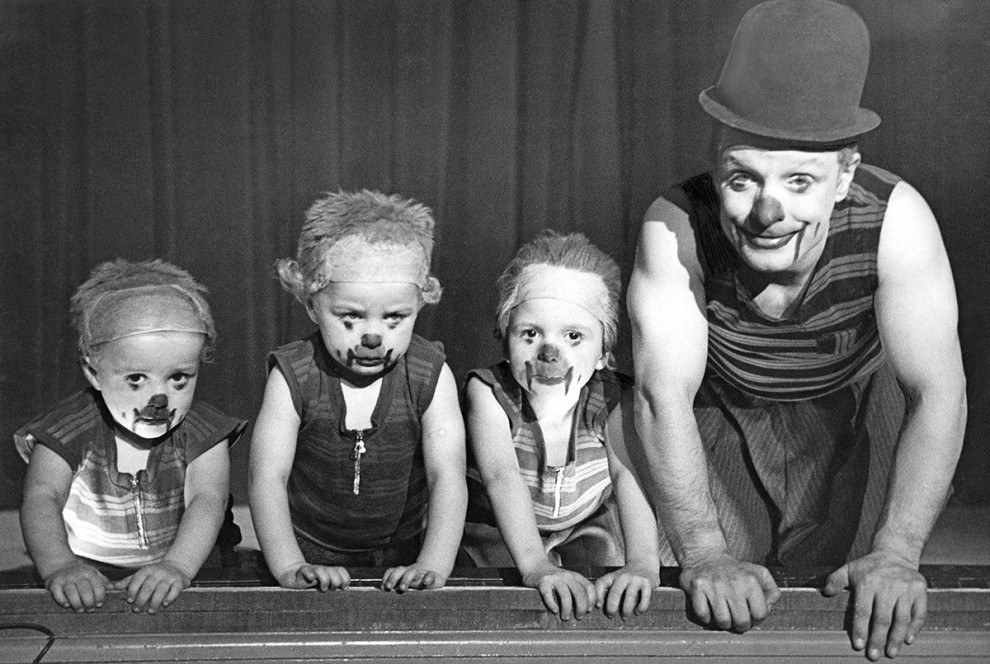 6. Little girl is definitely not happy as the clown picked her up. I’d cry too. 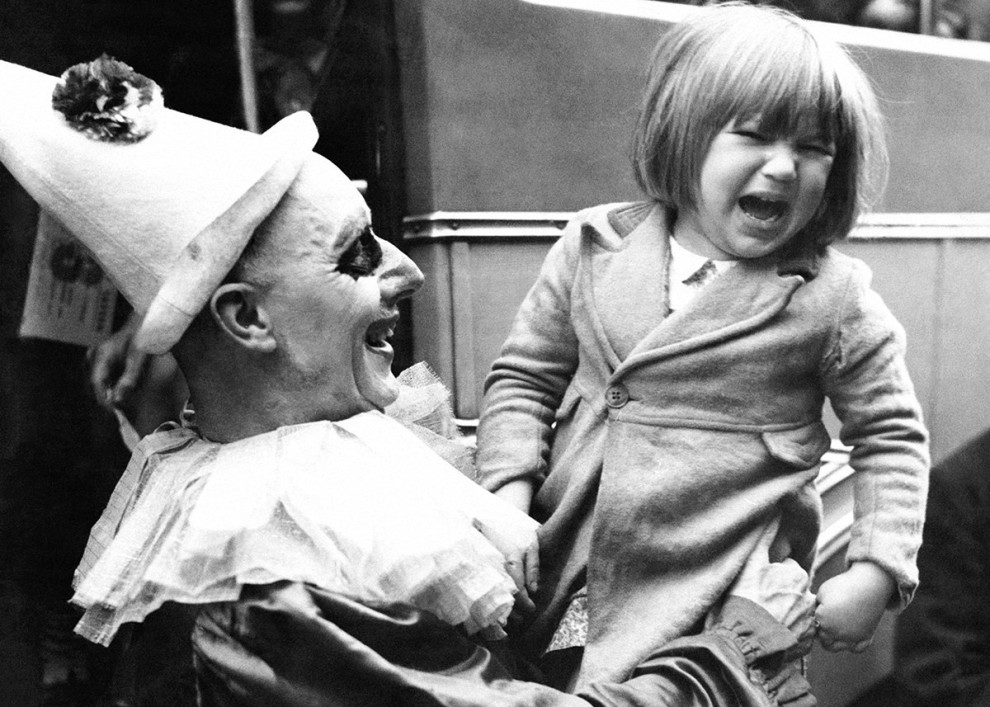 7. Waitresses are shown being made up as clowns for the annual supper of the Circus Fans’ Association in January 1936 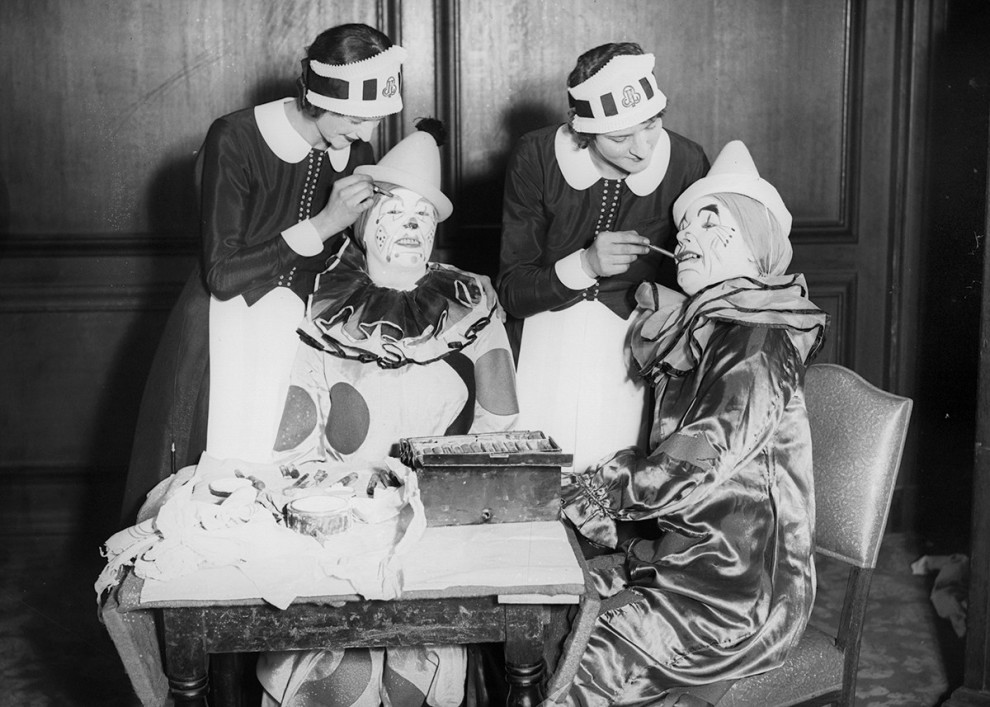 8. On the graduating day of a clown school in 1954, a clown gets dressed with a smile as his teacher looks onward (left). A little boy’s dreams become reality as a huge inflatable clown looms over his bed in 1954 (right).

And one more factor that has put a seal of hate for clowns in my heart is that one experience I had with a clown.

Dad and I went to a gas station nearby to get a refill for the car. It was definitely past 10 p.m. This is from 15 years ago at least. Dad went to the tuc-shop to get some juices for me and my brother for school the next day. While he was away, a clown started banging on the passenger seat mirror where I was sitting. I started screaming right on top of my lungs and kept crying till Dad returned. Since then, I have never ever wished to encounter a clown ever again. Because they look creepy and they are very scary. Period.

And I am pretty sure you guys would believe in me after seeing these creepy images. Scroll down below for some more creepiness. 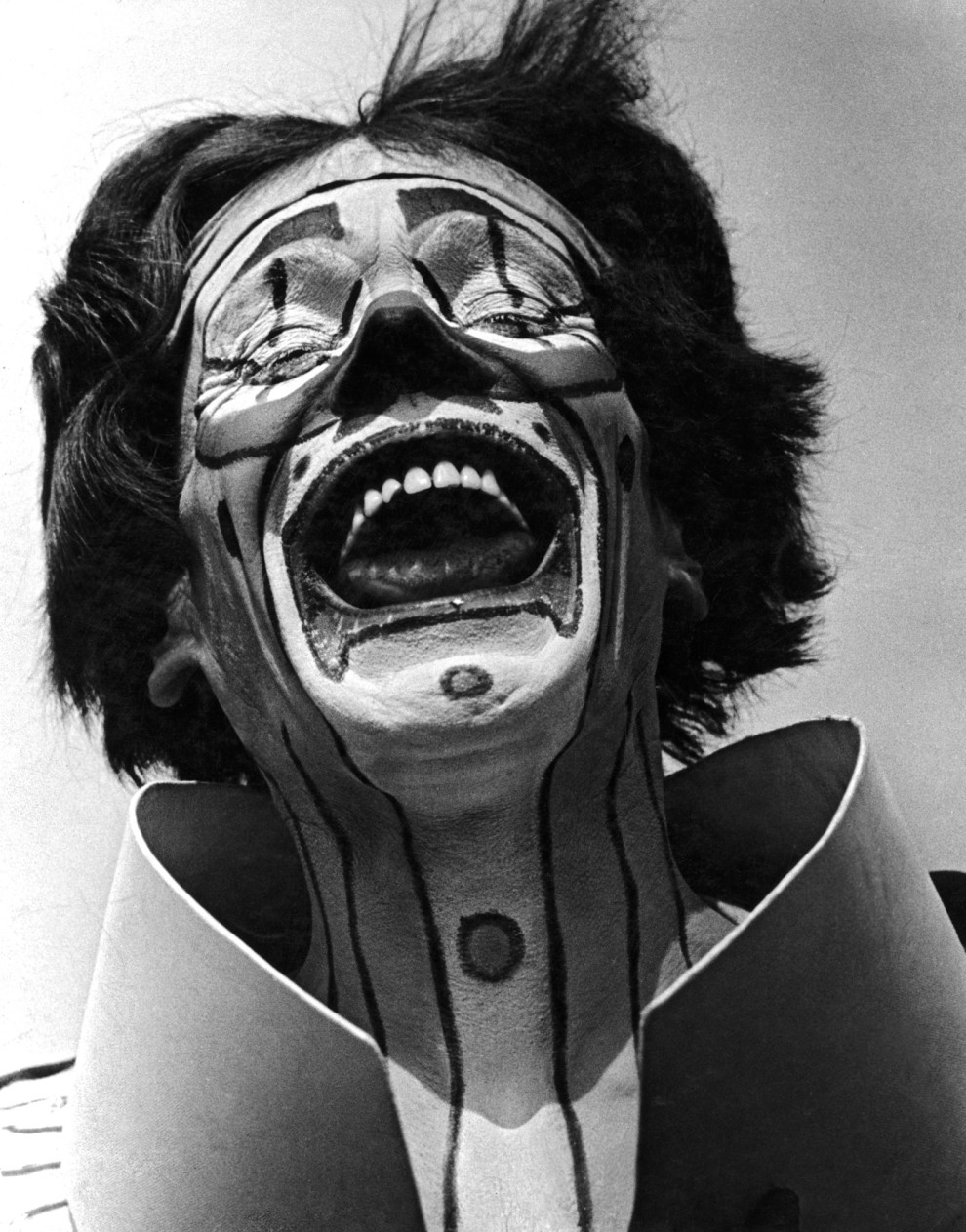 10. A happy circus clown smiles for the camera after applying his makeup, circa 1950 (left) A clown applies his false eyelashes before a performance in 1955.

11. Group of children pose with a clown during a holiday party for a firm engaged in war work during WWII in 1941. 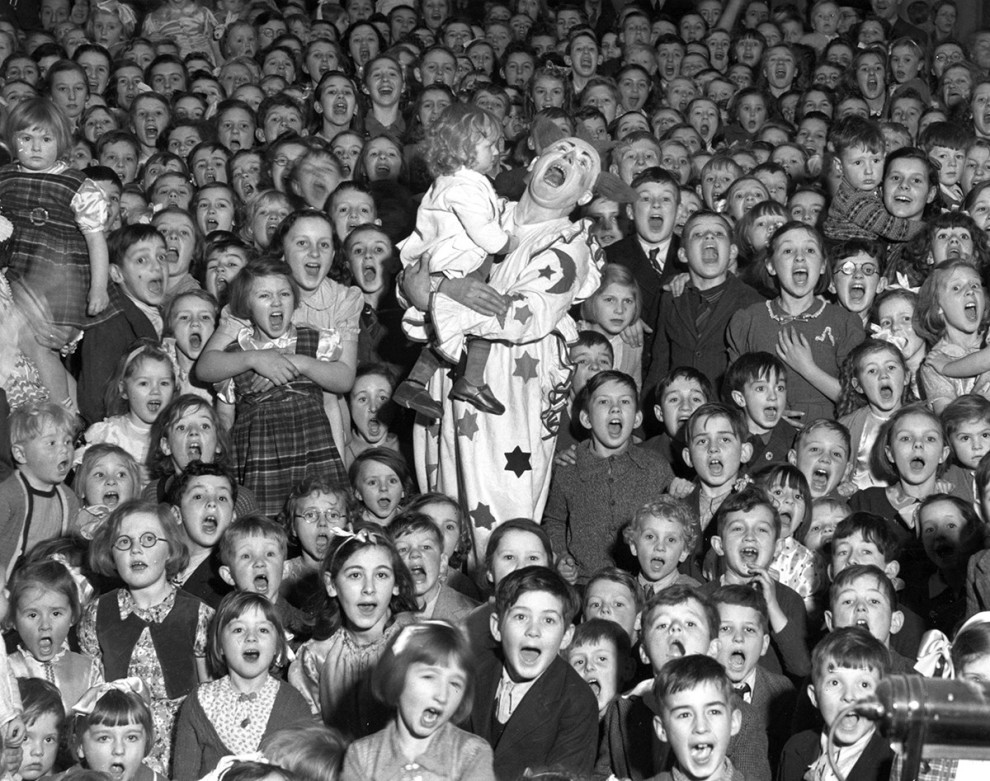 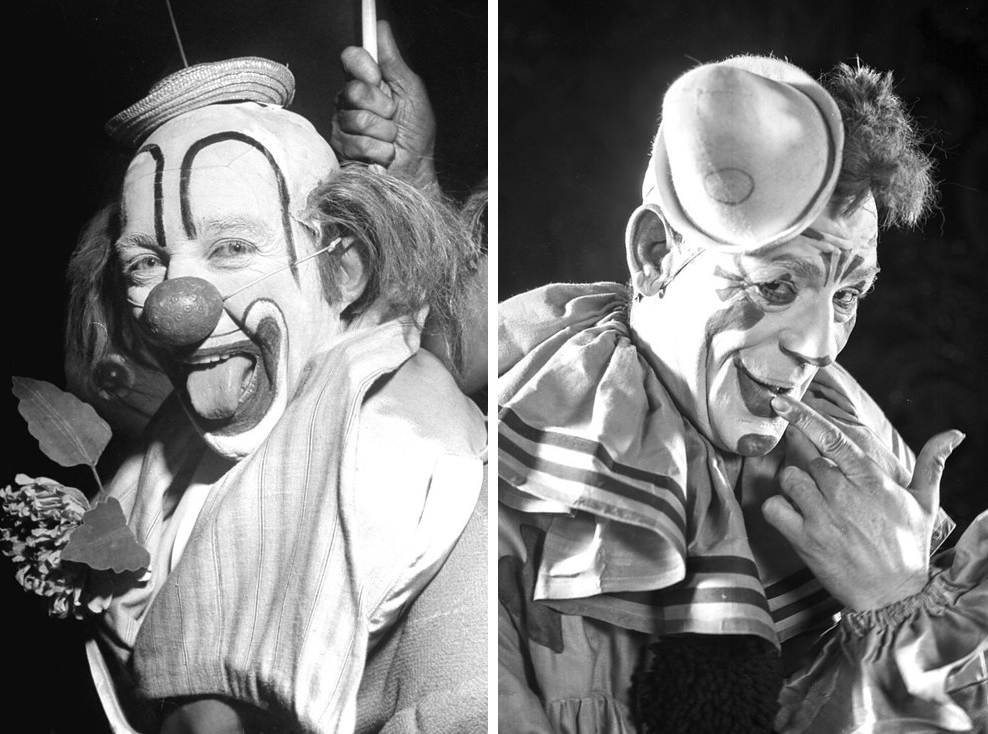 13. Clown offering a group of children some free candy, circa 1950s. 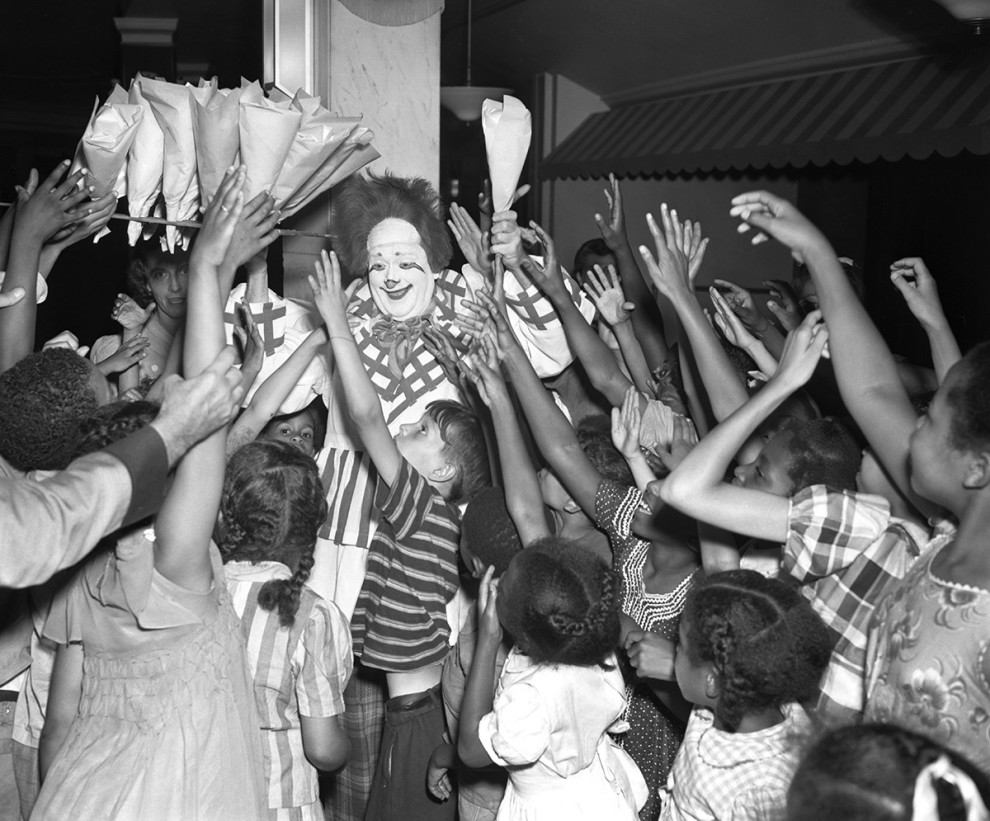 14. Left: 78-year-old clown named ‘Whimsical Walker’ is pictured in London, England, 1928. Right: clown of the Ringling Bros. and Barnum & Bailey Circus is seen showing a pig to the child in 1941. 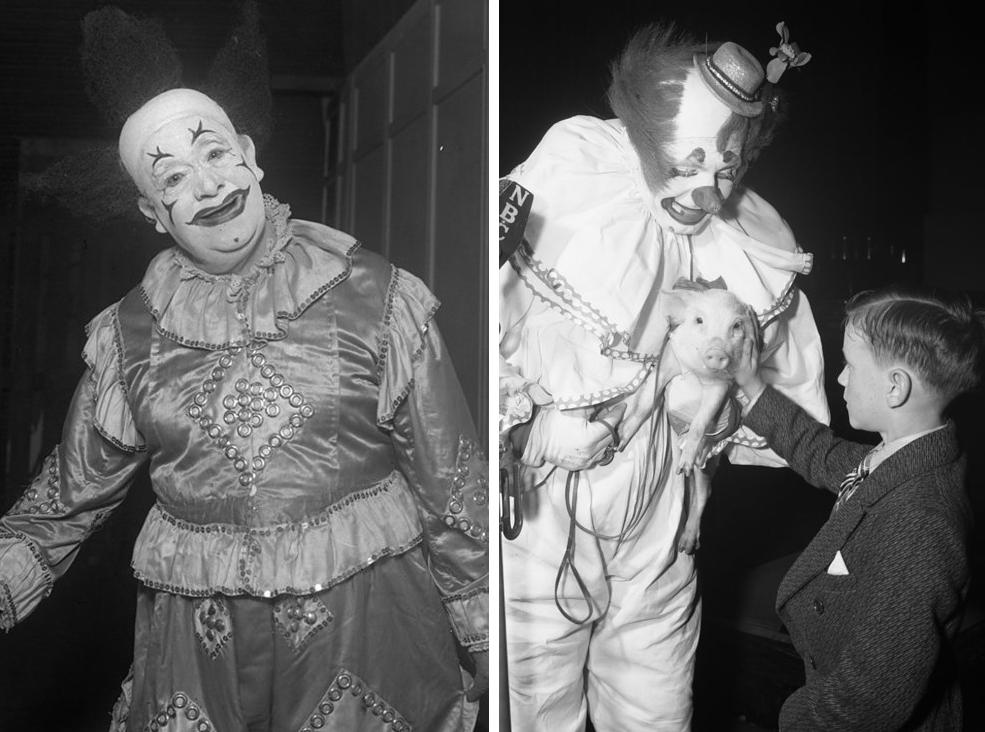 15. She doesn’t look bothered and that bothers me. 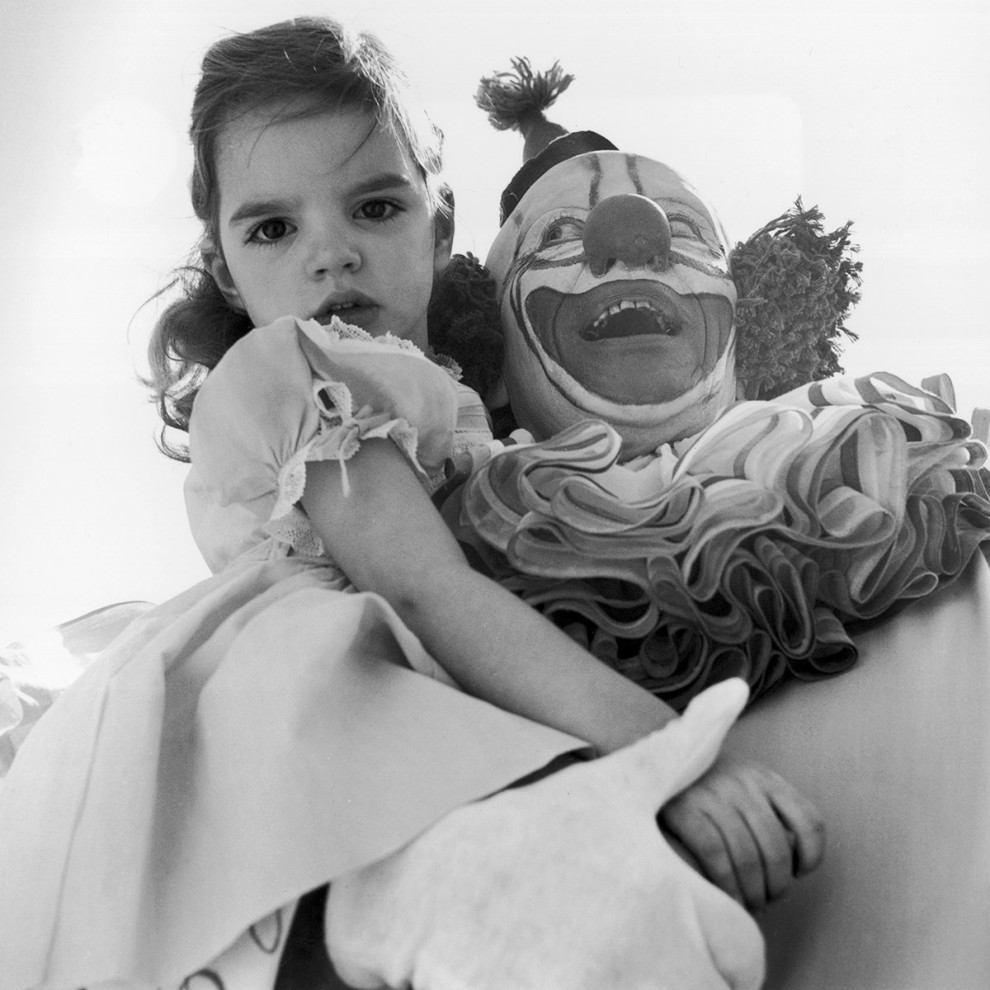 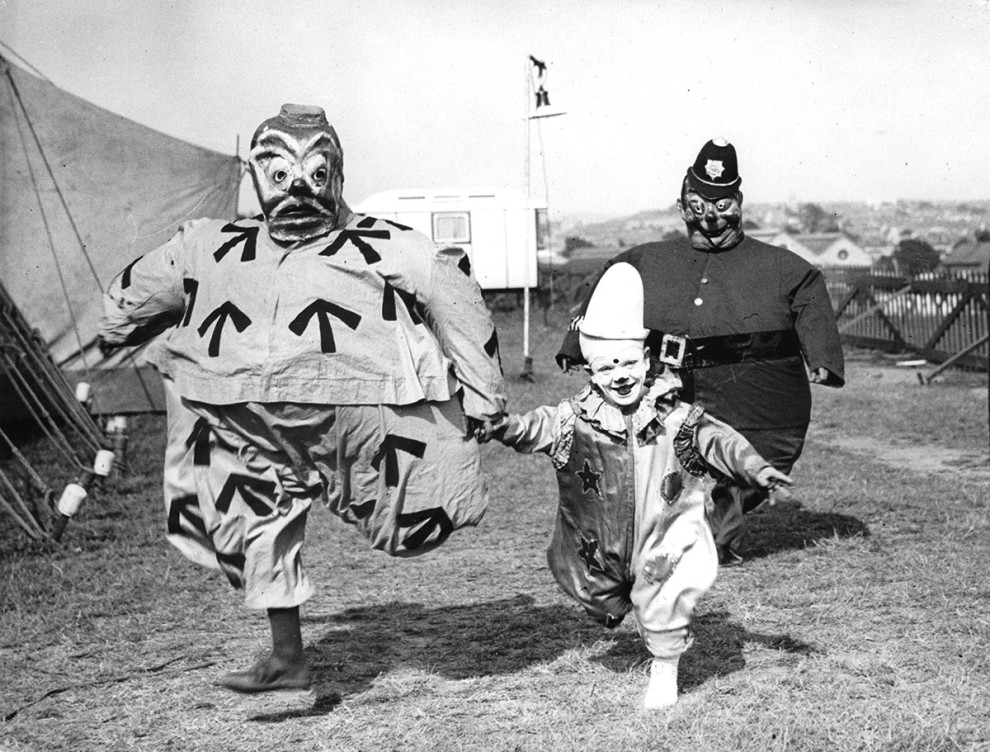 I know I know you guys don’t usually like when my articles end (self-esteem at its extreme), but today all those who are afraid of clowns must be happy that it has finally come to a conclusion. I hope you guys liked it. And I do hope that it wasn’t nighttime in your region when you viewed this lol.

Feel free to share your thoughts and opinions in the comments section down below. Happy days!