Most women have gone through this at least once in their life.

Sadly I have never once met a woman who didn’t go through something similar. According to even the statistics which was done by surveying more than 1000 women in the UK, more than 97% from ages 18-24 had been hara**ed at one point in their life. And while we think a lot has changed, there is still a lot of victim-blaming whether it be by the hands of a man or any other gender. I am quite sure you have heard several similar stories but it still does not hurt to cast light on these experiences so that more people can realize that the fight isn’t over yet.

This female bartender was closing up shop one night when a customer decided to come back and force her to sit on his lap. Not only does this sound terrifying, but there aren’t many ways to get out of this sort of situation without angering the other person and making it worse for yourself. So she did the only thing she could do at that point. She made up a lie about how she would call him later and got out of there as fast as she could.

However, apparently what she did was ‘manipulative’ as said by her male colleagues.

She was only minding her own business when a stranger came up behind her. 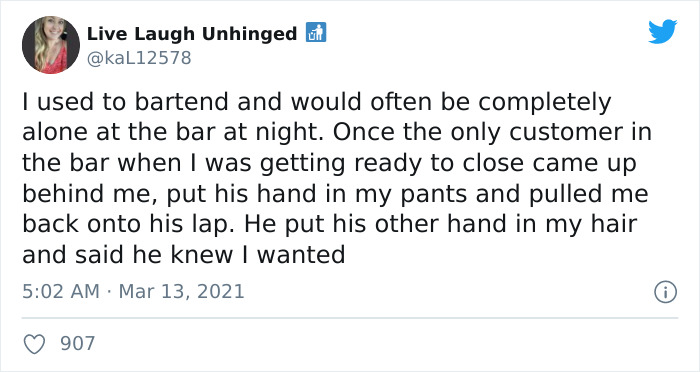 Many people would freeze up at this point and not know what to do because it is a scary thing no matter what anyone says. 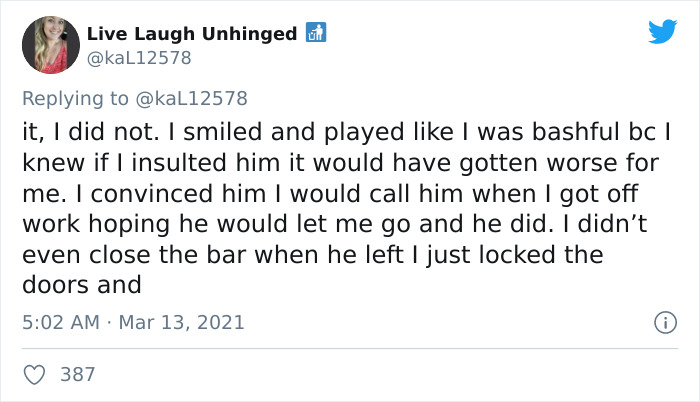 And when she told her male colleagues, rather than supporting her, they called her ‘manipulative’. 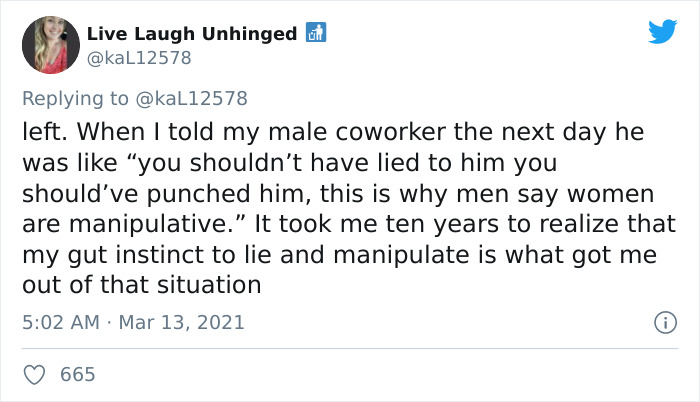 She did what she had to do to survive and she shouldn’t have to explain her actions. 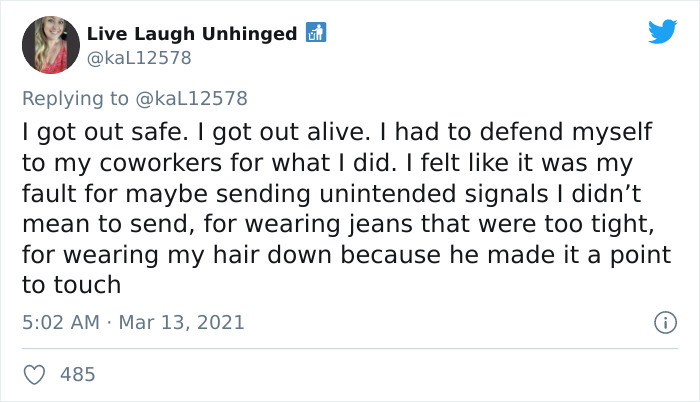 It may not even seem like such a big deal to many but it can leave an imprint on you forever. 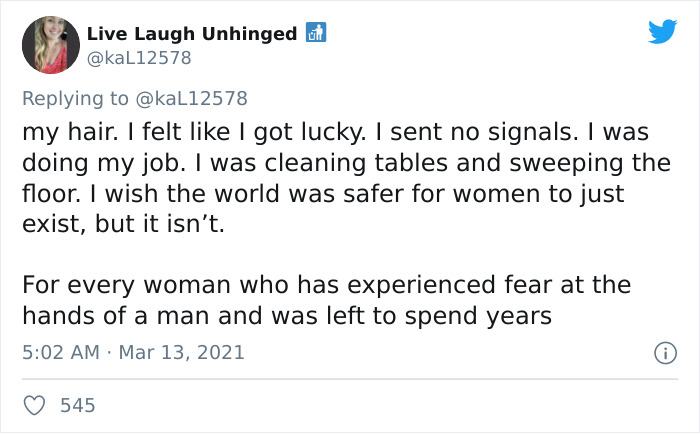 At the end of the day, it isn’t a victory but what else are you supposed to feel?

This can change a person forever and it is horrifying to see that so many people go through it and nobody ever realizes. 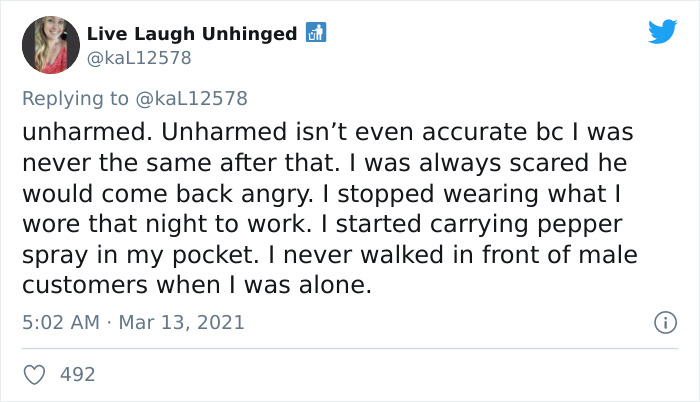 In January 2018, SSH commissioned a 2,000-person, nationally representative survey on s**ual hara**ment, conducted by GfK. It found that nationwide, 81% of women and 43% of men reported experiencing some form of a**ault in their lifetime.

People on Twitter had a lot to say about her experience. 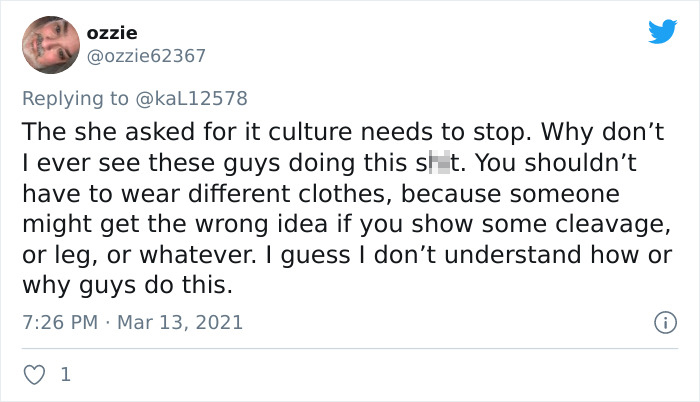 And how she was quite brave to come forward and shine a light on something that still happens to most women. 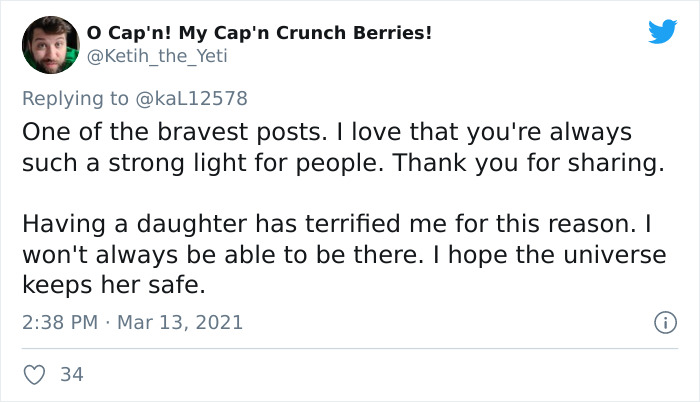 We should stop with the ‘boys will be boys’ or ‘you shouldn’t have worn that’ as it takes away the power of responsibility from a guy. 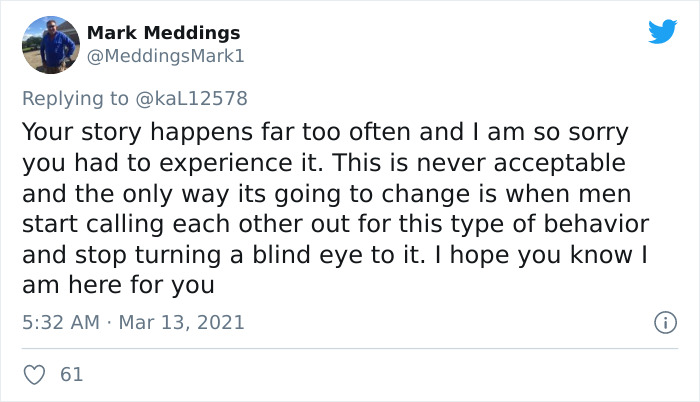 Quite a lot applauded her for thinking on her feet and getting out of there as fast as she could.

Many bartenders are told to suck it up as if it is in their job description.

Some even shared their own stories which left us with dread in the pit of our stomach. 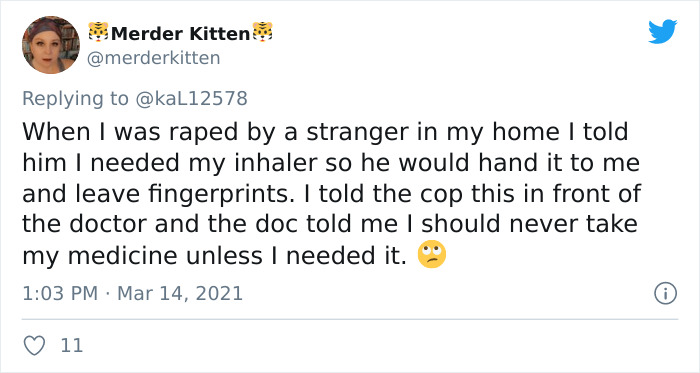 Nobody should have to do anything to ‘be safe’. It should never be a woman’s responsibility for a man’s action.

We never want to herd all men into one box and we aren’t saying men don’t go through this as well.

But as evidenced by the comments, the majority of the victims are women.

They clearly did not take it as seriously as they should have.

It was her survival instincts kicking in.

This comment elaborates the subject perfectly. It’s far too many men who think acting like this is okay.

Every gender has its own problems but this is quite true in every facet.

Let your opinion be known in the comments below about this issue and how we as a society can go about solving it. Don’t forget to share this as people need to accept that this sort of thing still happens every day and we need to shine a light on it.