Not everyone likes the same thing.

I understand that France has some great cuisine but that doesn’t mean other countries are not on par with them. And just because you are French does not give you any right to act all high and mighty about these sorts of things. We already know how bad the service industry is and how the people have to work for a bar minimum while also taking all kinds of insults hurled at them. So it does not make it any better than a French snooty woman just adds to the stress of these hard-working people.

Apparently, this French step-mother thinks that Americans can’t cook and loves to tell everyone no matter which restaurant she is at. I understand not liking something but that doesn’t mean you have to be rude about it and send everything back that you order. However, that is exactly what this woman loves to do And you would be surprised to know that she does actually have people who care about her despite her horrid behavior towards the wait staff.

If she hates the food so much, why doesn’t she cook for herself? 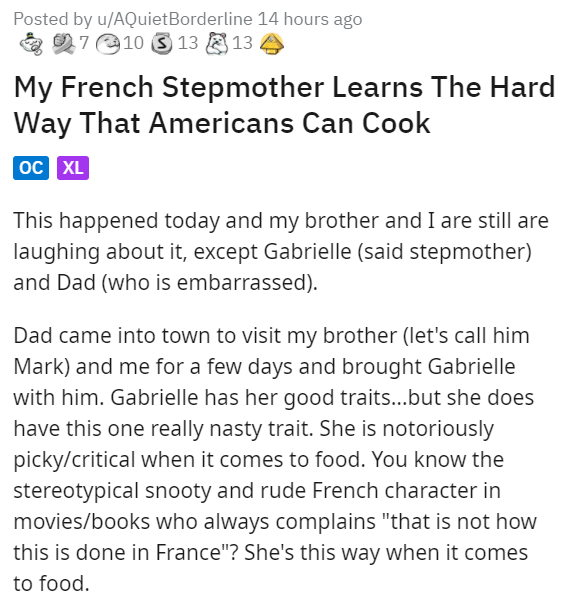 They are clearly not happy with their Father’s choice of women but what can they do? 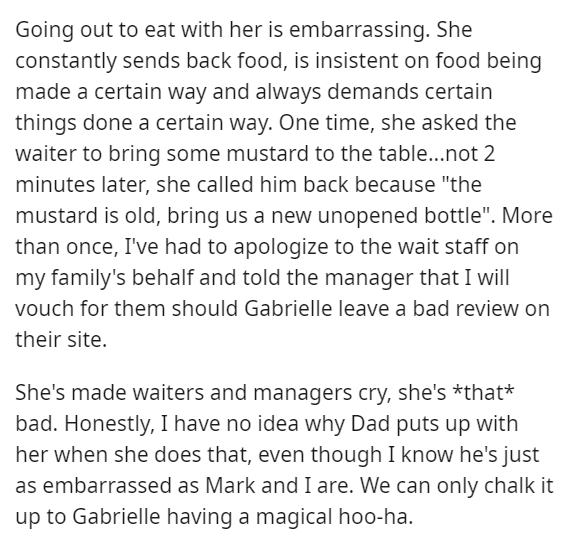 But despite all of her past rudeness, the father brought her to a classic American diner which was a ‘choice’. 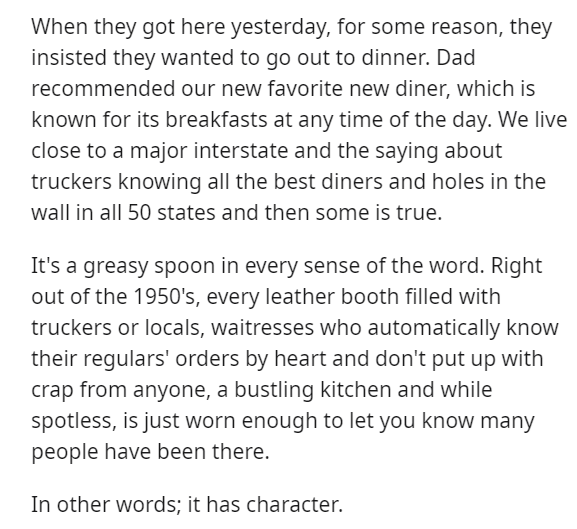 The kids even had to go ahead and warn the wait staff beforehand about the whirlwind that was just ahead. 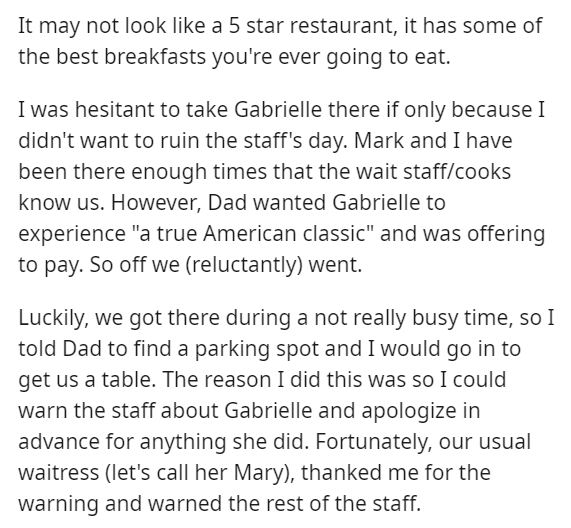 It started off just as they expected with her sending back everything. 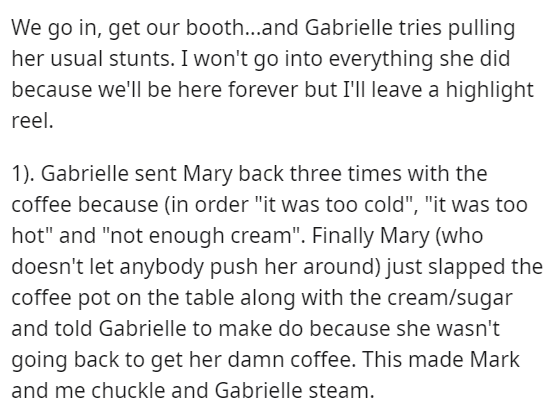 Gabrielle was rude all the way even insulting staff who had done nothing wrong. 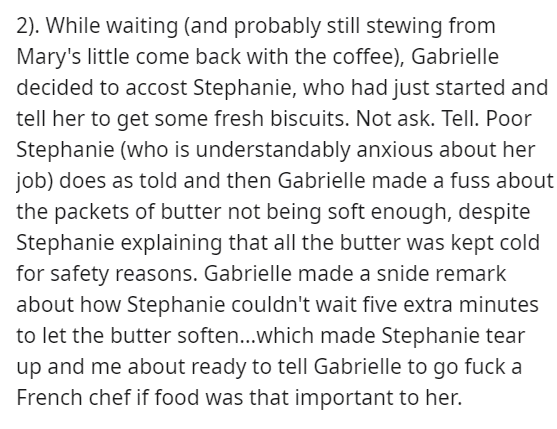 You would think it would end at that but it only got worse when she decided to leave a ‘tip’. 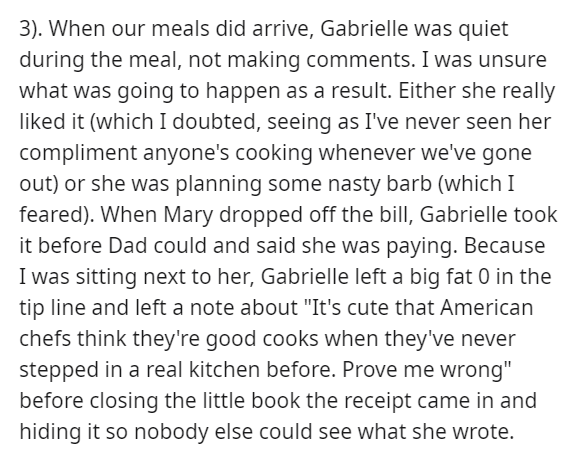 As a French person, I can only assume that Gabrielle is acting like that because she would never ever be able to pull such a stunt in France. Especially not in Paris. The restaurant industry here is very proud and the wait staff takes no shit from anyone. And they will have no problems telling you where you can stuff your attitude.

She’s probably been told to shove it by a french waiter and is now taking out her impotent rage on American waiters who have no choice but to take it. –ComfortPatience

But the kids had enough of Gabrielle’s behavior and decided to do something about it. 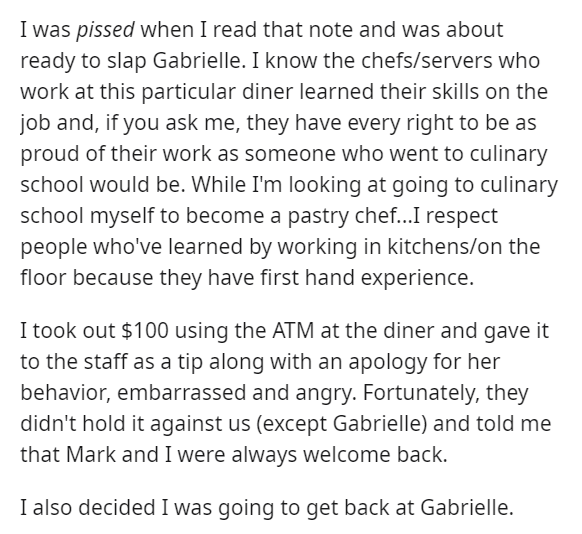 They chose to use their own cooking skills to fill the house with a delicious aroma. 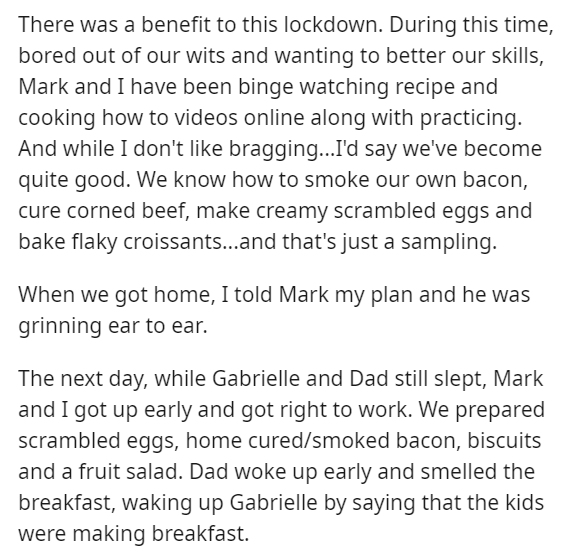 But when the time came to dig into the food, they let their dad know what she had done the day before. 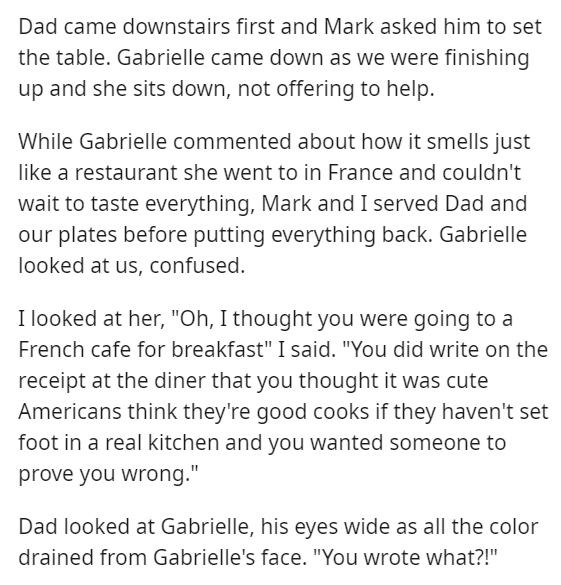 Maybe this will make her learn to treat everyone with respect but I seriously doubt it. 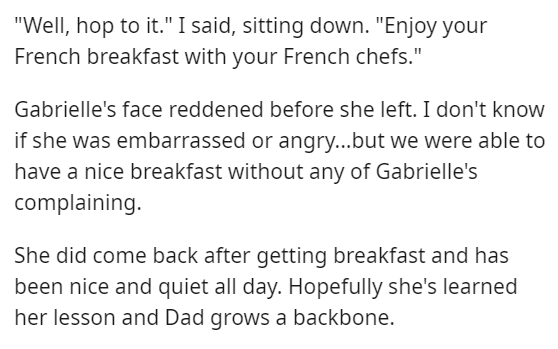 A funny and benign version of this: my band toured England and a friend from France traveled with us. We were a dirty punk band. Smelly Americans and he was a smellier French crust punk (ie, wore a deteriorating jean jacket vest with spikes on it, had a dred mullet, stank) and one show we got a spread backstage that actually had decent food (usually we got a loaf of white bread and some cold cuts) we got fruit, crackers, red bull and different kinds of cheese. We were in heaven after eating mediocre British food for a week.

Our French roadie/friend just eyed the different (actually decent) cheeses and sneered, “this is not cheese” and refused to eat it. It was a hilarious disconnect watching a guy who looked borderline homeless turn up his nose at cheese being offered to us. –negativeyoda

What are your thoughts on this? Do you think France really does have the best cuisine and what do you think is the reason behind her acting this way? Comment down below and let us know.