What’s better than all the dog lovers coming together as a community to have some serious discussion about dogs. However, sometimes the discussion might blast off with laughter when a confused dog owner dares to ask something related to Dachshunds on Twitter.

Here is what happened when a puzzled dog owner named Sarah, took to Twitter to seek a little help on Daschunds and their aggression. Her desperate call for help went viral. The people didn’t stay back in flooding her with all the fact checks she needed about Daschunds. This humourous discussion consequently turned out to be pretty informative, though. Twitter after all can be pretty productive and helpful, even if you’re an animal lover.

By now, Sarah must have had a clear idea of how to raise a Daschund because she revealed her little secret of what her next plan was after going through the stories people just shared with her. Make sure to read till the end to know what exactly is her plan and also to pick some extra chunks of information you might need if you are planning to keep a Dacshund!

1. You sure don’t know about Daschunds that much, after all!

2. That’s a warning, while you decide to enter a home which is on the watch of a Daschund…

3. They are adorable but they do have some darker secrets

4. We love how she clarified her first stance. LOL

Thanks for clearing that out!

5. They probably think we’re making fun of them…

6. And you never joked around a Daschund again

What were you even thinking bro?

7. Here’s another validation of dachshunds being a-holes.

8. They only appear to be tiny and adorable, they can surely rip you apart if they don’t like you…

These comparatively tiny dogs are small for a reason. They were specially bred to fight badgers, they could go down badger holes and take them down. Aggression is part of their doggy DNA… However domesticated Dachshunds aren’t always that fierce, but you never know when the real Daschund in them gets unleashed.

If they’re that combative, why do people keep them as pets anyway? An innocent question here…

9. Finally something brighter and lighter about these fierce floofs

12. Sweet and sour, but mostly sweet 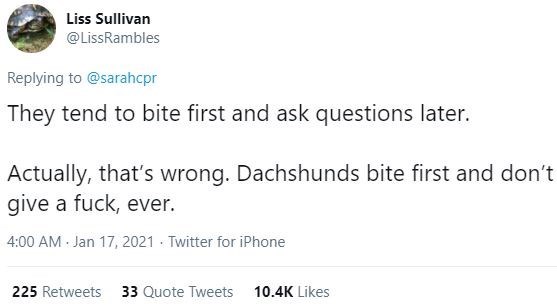 He was just trying to save you!

I guess Sara made her decision, she’s got all the information she needed on Dachshunds and is all set to get one for herself. Girl, make sure your new little beast gets along with Stella… Best of luck!

Well, no matter how beasty or ferocious a certain dog breed is, a dog lover will always find a reason to get it as a pet. These folks have enlightened us pretty well. What decision you would have made if you were in her boots? Do let us know in the comments below…