Dogs are precious and they are not just a pet, they are a part of our family. The youngest member and the furriest member of the family. Someone who doesn’t have pets may think it is all drivel to call an animal, one’s family, but what they fail to see are the sentiments that are attached to those pets. Whether we’re old or young, we develop a special kind of bond without pets that’s unbreakable. Ultimately, we start treating them like we would treat an infant human. The thought of our pets crossing the rainbow bridge one day scares us to the core. There is no way one can ever think of giving up their pet or letting someone borrow it.

The “Am I the as*hole” subreddit on Reddit is loaded with amazing stories, each one of them is super interesting to read and some of them just leave us speechless. Today we found yet another interesting post in this subreddit and we think you guys should definitely read it. It’s all about a girl who started going out with her “good friend”‘s ex-boyfriend and after her dog passed away, she asked her “good friend” to lend her the dog she had. All kinds of crazy, we know, but let’s first read the whole thing. So scroll down to find out what happened exactly.

Op was being cheated on.

Now that’s where all the drama started.

Former friend went over the edge.

The Op is not the as*hole at all. Who would ever let anyone borrow their dog that they love. A dog that’s not just a pet, but a family member to them. It’s just like asking someone to borrow their baby. A part from everything, what was the point of blocking our friend on Facebook? So, you’re dating your friend’s ex, okay. It’s okay, what’s the point of acting so immaturely? The only one, who’s an as*hole in this story is the former friend. Redditors never back down. They are sharing their views on this whole situation. Scroll down to read what they said.

Just think of it for a moment. 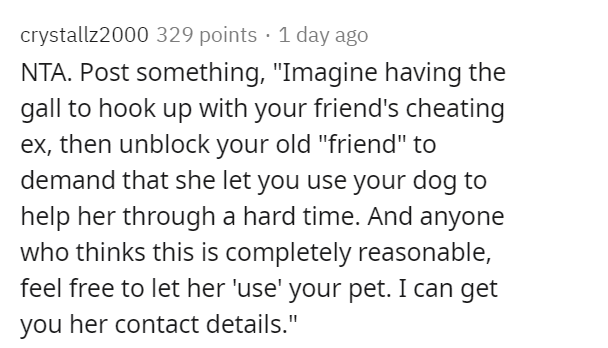 An insult to the dogs.

Who sided with her?

Whoa! This was an insane one. Op’s former friend has lost all her ability to think straight. She’s acting absurd. What do you guys think? Let us know in the comments below.