Women are not objects.

I can’t believe that I even have to re-iterate this so many times but it seems so many managers and bosses seem to think so. And before you go on to say that was in the past, most of the following stories are set in the current time. From higher-ups preying on young girls to making creepy comments that would make anyone comfortable.

The saddest and the most infuriating thing in all of this is many of the perpetrators didn’t even get what was coming to them. They didn’t get any sort of repercussion and many of them were allowed to continue their work. Most women I have met have some sort of similar story to tell and it is always heartbreaking to hear.

So I applaud the following women for being brave and sharing their stories.

#1 So what if it’s a male dominant field? 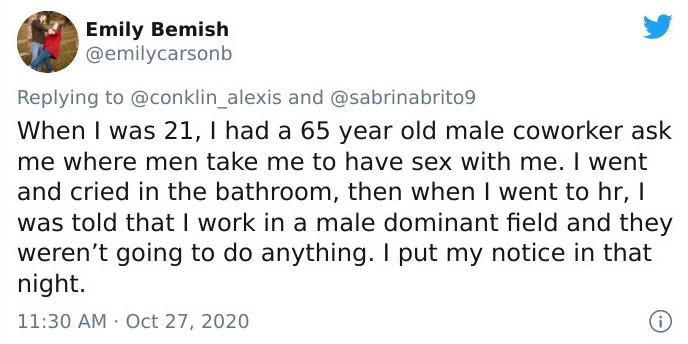 #2 Better to fire the other person right?

#3 Good on her for standing up for herself!

#4 Not only is she a bad boss but a worse mother.

#5 As we all know men go through it as well.

#6 I sure hope he got some sort of comeuppance. 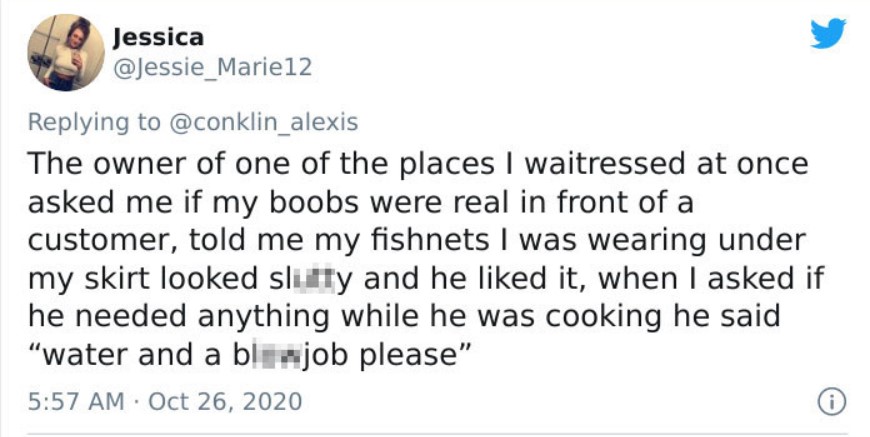 #7 That is just terrifying.

#9 At least something happened no matter how late. 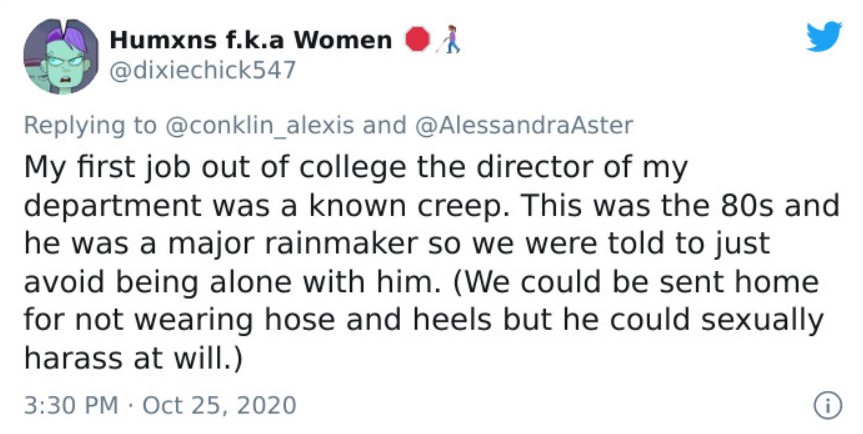 Those sorts of people still exist. I know professors who women are told not to be alone with. It’s an open secret and nothing is done. Usually, for the same reason, they publish a lot or attract large classes. -Samantha Lomb

#15 He was using the recruitment process in lieu of tinder. 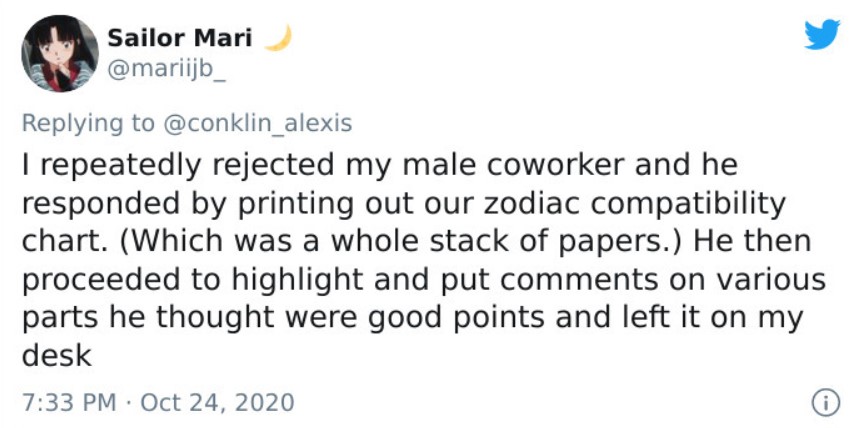 #18 She needs to get out of this situation as soon as possible. 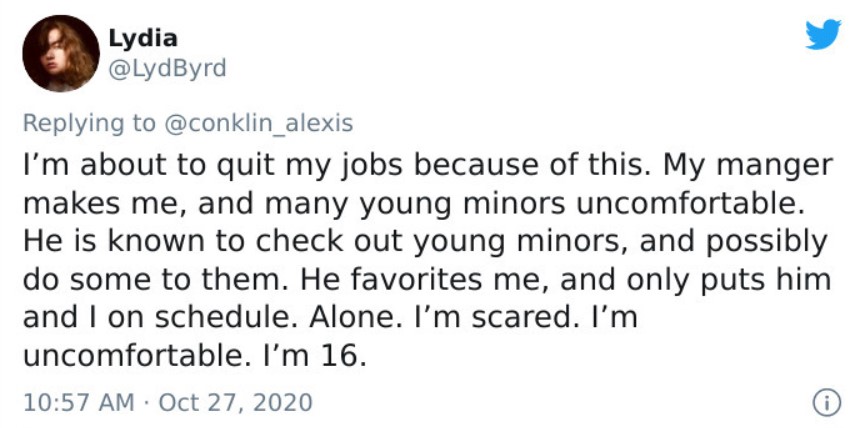 #20 I bet they believed you after the lawsuit.

You’re right to leave a potentially dangerous situation. Write up reports and send them to HR. They might not do anything for a while, but he may eventually be fired if enough complaints reach higher-ups. If he’s touched anyone in a gross manner, that could be reasons for a lawsuit. -Viviane

#21 This is truly disgusting.

#22 No one ever said women were above this sort of abhorrent behavior.

#23 I can’t believe no one did anything about that.

#25 Now even hairstyles can be se*ualized?

#26 Because that friend probably made jokes as well.

#27 So the managers listened when it was a woman? Interesting. 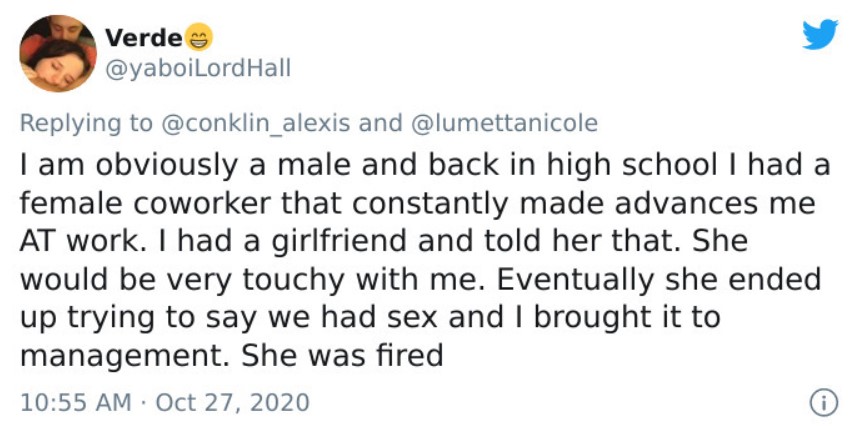 #28 What did he hope would come out of that?

#29 Wouldn’t it be easier to fire the problem?

#30 That has to be against some sort of law.

Turns out, forcefully removing a hijab is considered a hate crime.

#31 Nobody would have blamed her if she kicked him.

#33 Nobody is ever ready to deal with this sort of thing. 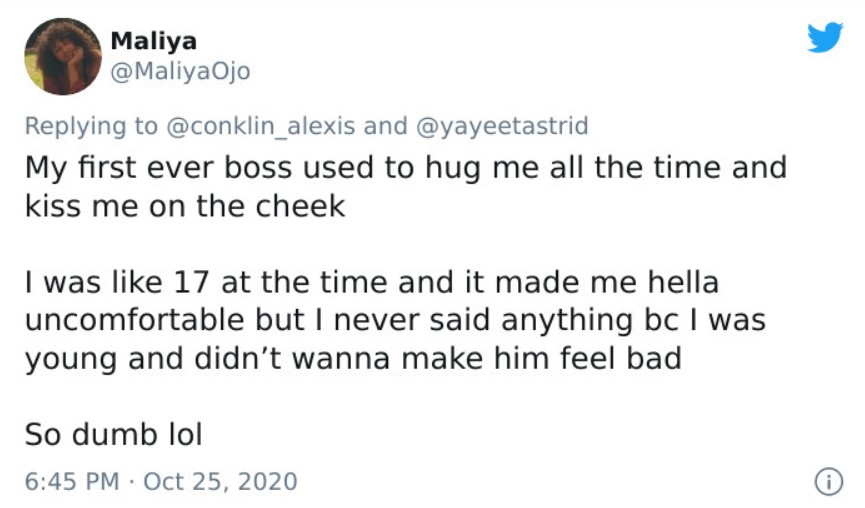 #34 There should be more rules against this sort of thing.

#35 And most other women would agree as well.

#36 Because when women don’t want him, that means they are lesbians. Great logic.

#38 How can you not think anything of it? That is crazy! 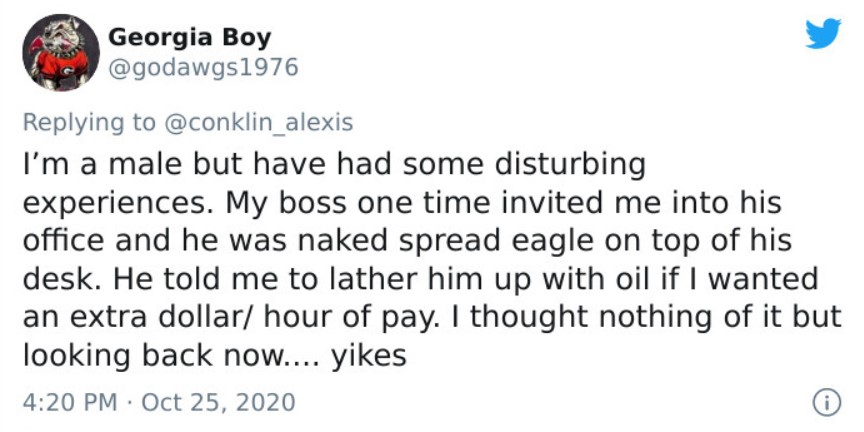 #39 Creeps like these always make friends with the higher-ups.

#40 And was nobody there except you and him?

I would’ve said, “You talk to your mother with that foul mouth?” See, if he complains about me being insubordinate, I can tell HR/the big bosses exactly why I said it, and make him and the other foul mouths squirm, having to explain exactly what they were saying and doing to make it happen. -Kathryn Baylis 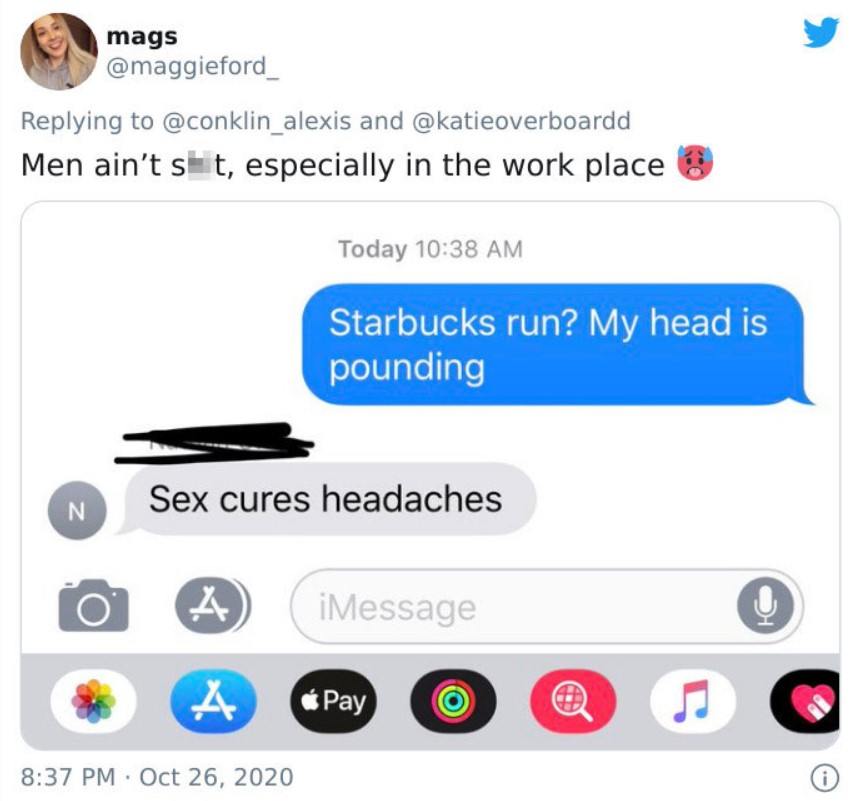 #43 Good on you for not eating there anymore.

#45 Only a guy could deter them away?

#46 I always wonder how people like this don’t get arrested.

#47 I’d want to vomit after hearing that as well.

#48 Higher-ups force us to do so but it is completely wrong.

#49 That is certainly uncomfortable.

Has anything similar ever happened to you? if so let us know in the comments below provided you are comfortable sharing it.