Marriage isn’t as simple as people make it seem.

The only things that can make a marriage last are compromise, love, and respect. We need to understand and support our significant others and not just abandon them when things are going wrong. However, some things can’t be worked out. Sometimes we find out more about a person after we get married to them and if they hurt us in ways that are unforgivable, we have to walk away. Some people are just evil. They can’t be loyal and they end up cheating on their significant others just because they aren’t happy with them. If you’re unhappy with someone, just leave. Don’t cheat. But people do what they want without thinking about the consequences of their actions. It’s worse if the person they are cheating with is actually someone who is blood-related to you. Betrayal exists everywhere.

This guy on Reddit shared the story about his wife cheating on him with his step-brother. However, he seems to put the blame on his dad for everything because he brought him into his life. He asked the Reddit community if he was wrong for doing so. Read the whole story down below and decide for yourself:

The guy ended his marriage with his wife after she cheated on him with his step-brother. He puts the blame on his father for bringing the step-brother into his life in the first place. 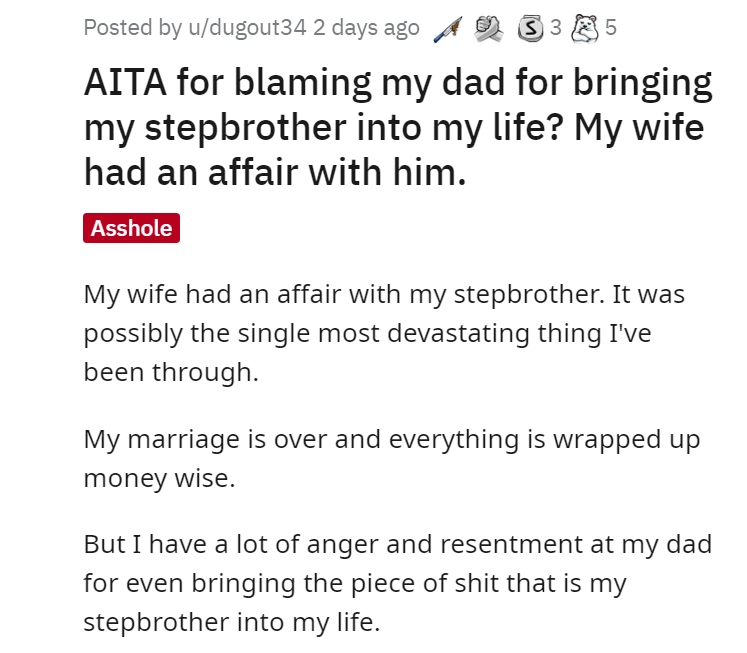 The guy and his sister always complained to their dad about the step-brother being awful to them but he never listened. So now they have cut off with him. 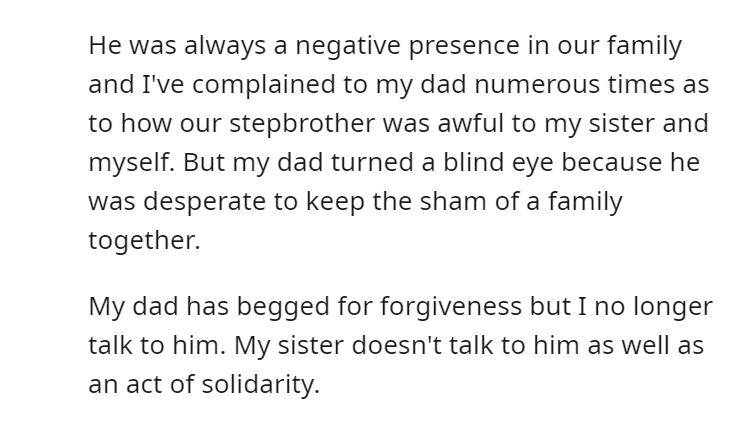 They work with their grandfather, and he supported them in this. The grandfather ended up firing the dad and step-brother. 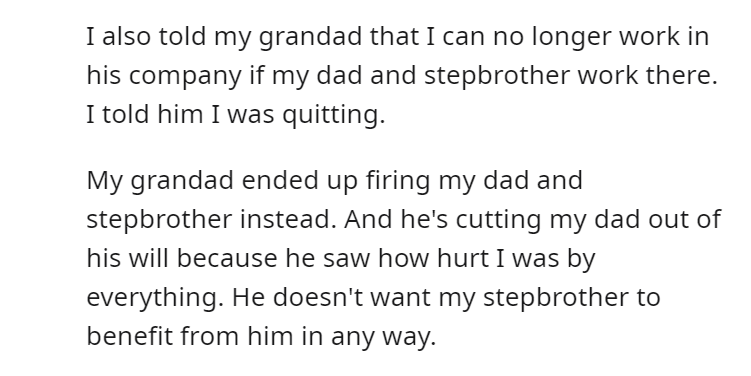 His father has now separated from his wife and is trying to make amends with his family, but the guy told him it was too late now.

Some people said the guy was right because his dad enabled the step-son for 15 years.

Many put the blame on his father.

However, some said the guy was in the wrong because it wasn’t his dad’s fault that his wife cheated on him. 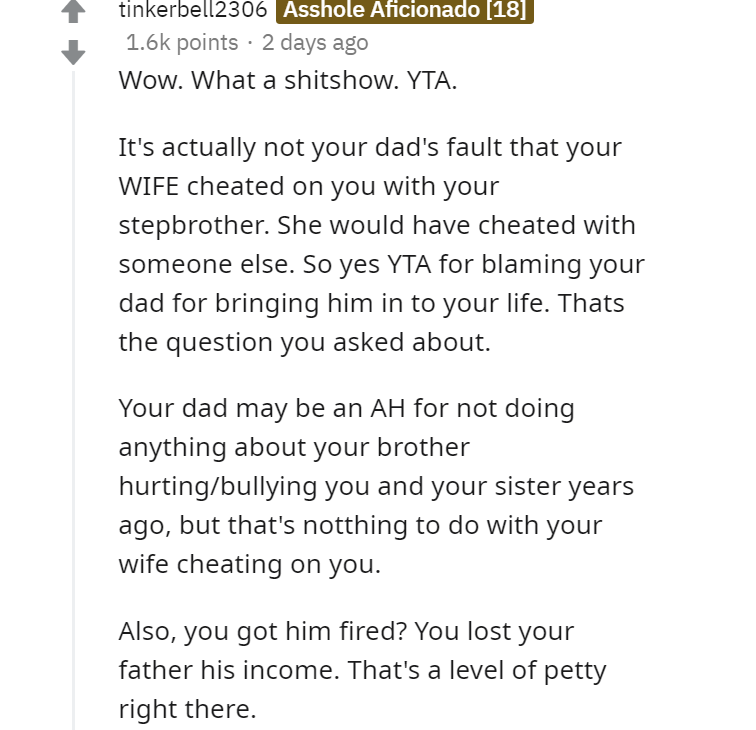 Some even praised his grandad for firing his dad and step-brother.

This Redditor tried to explain the guy’s reasoning. 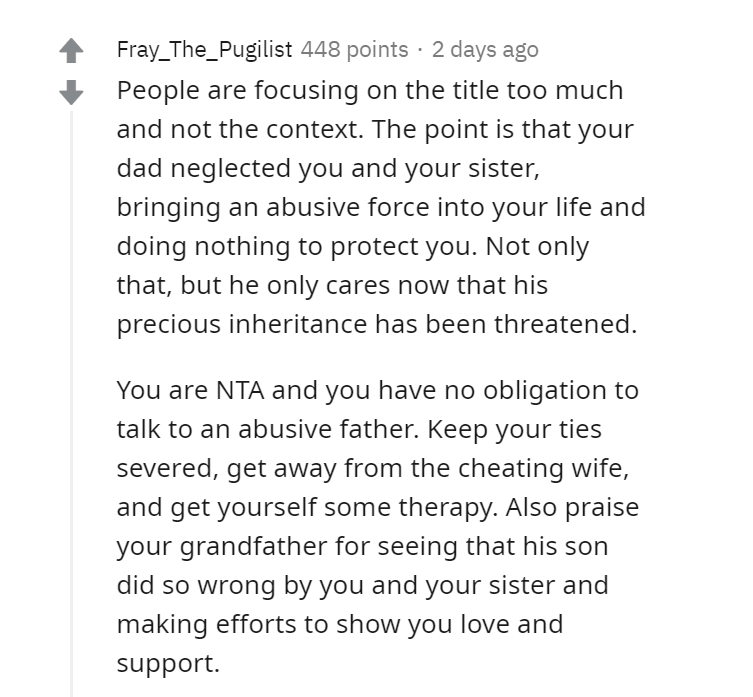 Some said it is normal for siblings to be mean to each other. 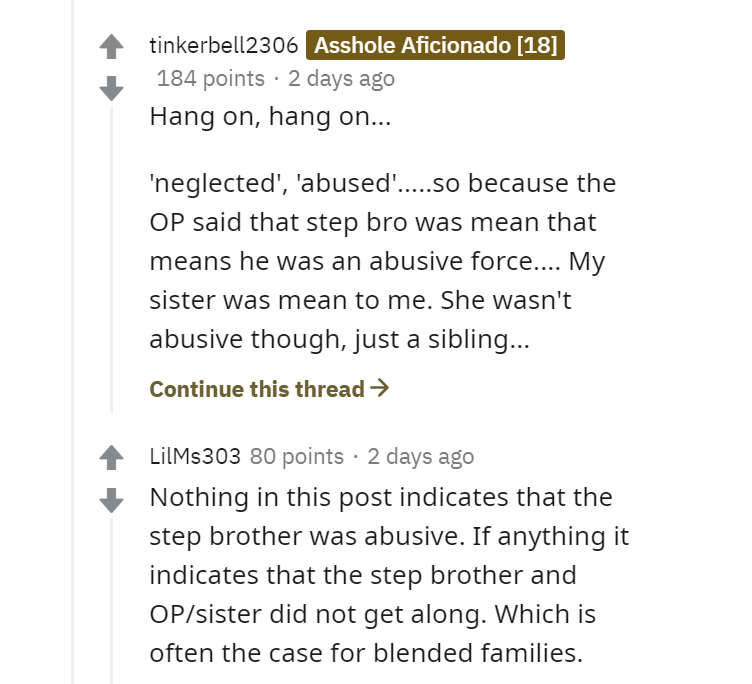 Most of them just said that the guy is in the wrong because his dad isn’t responsible for other people’s actions.

Who do you think is in the wrong here? Share your thoughts with us in the comments below.