Having a child can completely change your body.

No matter how much you love your child, there is no shame in feeling insecure over what pregnancy can do to one’s body. Other than a few lucky mothers, most women can expect loose skin, gaining weight, having a harder time losing it, not usually being able to be as fit as before, and having permanent stretch marks. But even with all of this, women preserve and embrace their bodies with all the tiger stripes. After all, the same body housed your child for nine months. It can be a painful but beautiful process.

However, that doesn’t mean many women don’t deal with body image issues after they give birth. They want to get back to how they looked before but it is rarely if ever as easy as just exercising and eating right. So it is never a good thing when their partner humiliates them or blames them for getting ‘fat’ when the woman has no control over that. As you can see in the post below, this guy clearly does not like the fact that his wife’s priorities have changed.

She used to be quite into cross-fit and going to the gym. 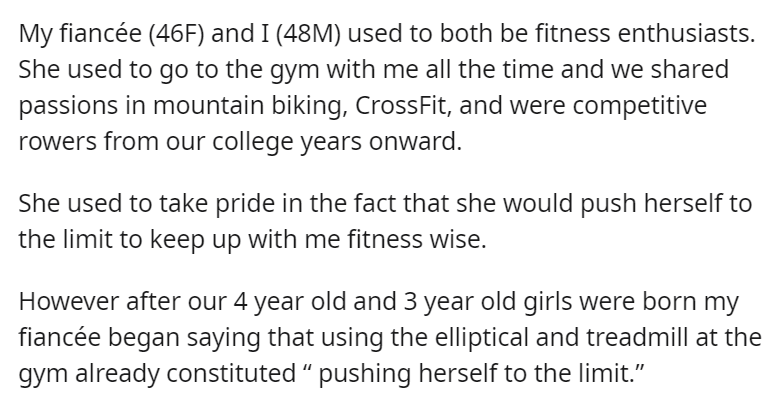 However, having a kid can change a lot of things and that includes your passions.

It is glaringly obvious with the way he condescendingly talks about his wife, he does not like this ‘change’.

Maybe it is just me but I have never seen anyone call cellulite ‘crepe’. 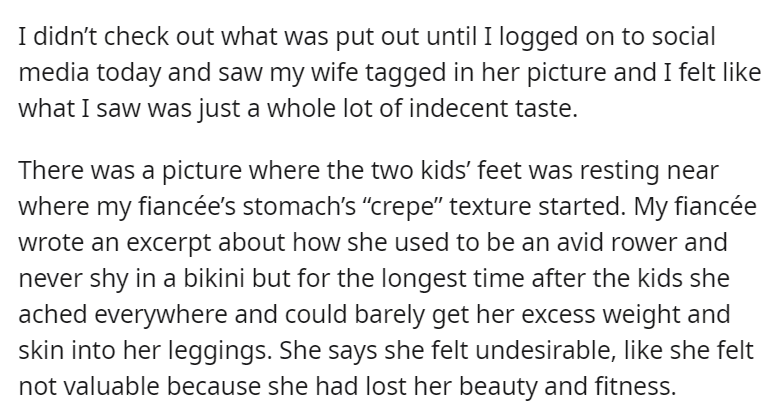 From what I can see, she talks about it was hard for her to embrace her new self but she realized her kids love her for who she is.

However, her fiance saw something completely different.

And that is why it was quite easy for everyone to name him the a**hole in this instance. 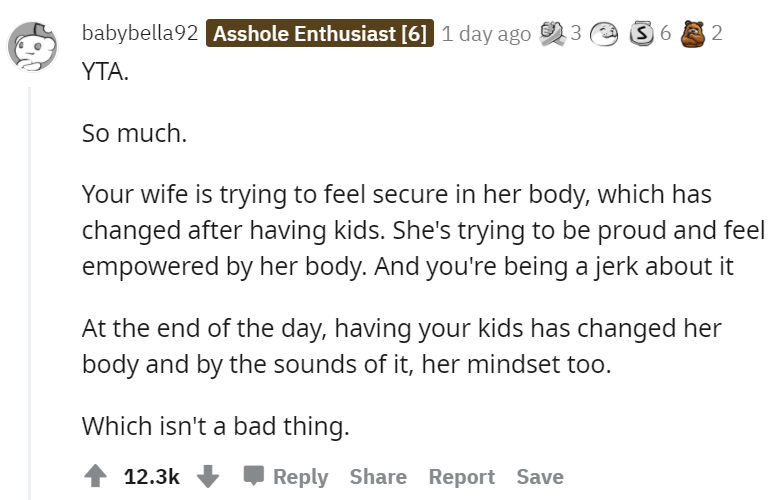 He apparently expected her to stay the same after she became a mother which isn’t possible. 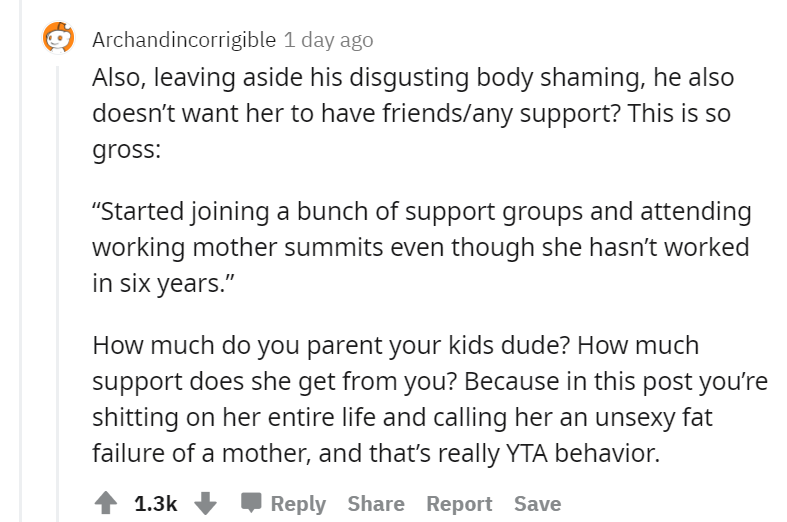 If he wants this relationship to work, he needs to work harder to be a decent person. 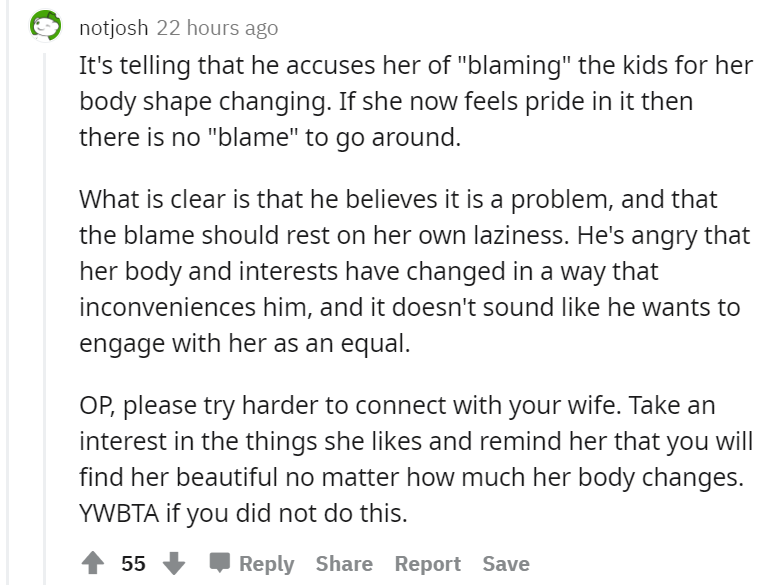 But nobody likes to admit their own mistakes and shortcomings. 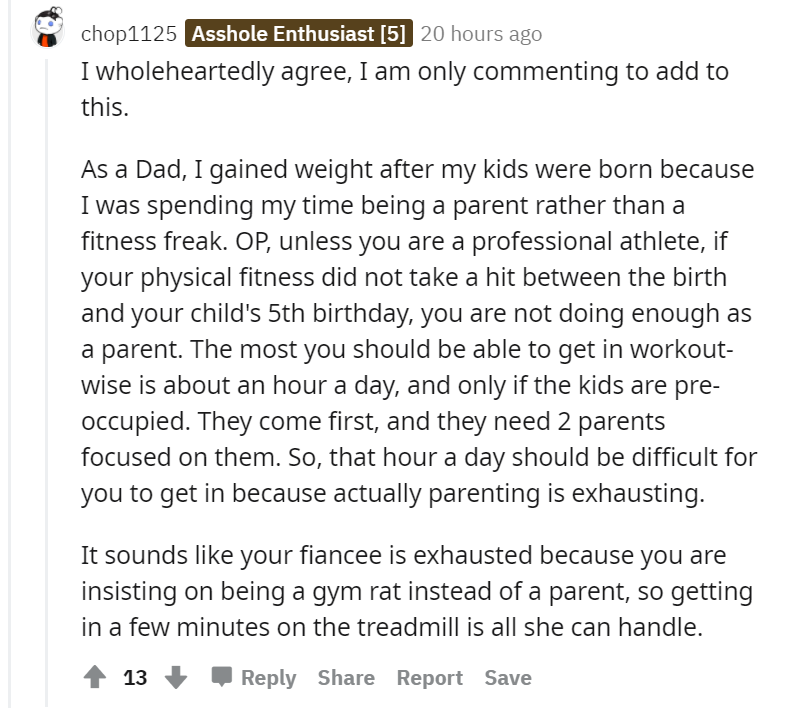 My body changed during and after pregnancy (short and long term). I have “tiger stripes,” but I don’t say that because I think it sounds a bit weird. She may be acknowledging that her children DID change her body, not only during the pregnancy but because she doesn’t have as much energy to use at the gym, as she did before. Priorities happen when more responsibilities get added to someone’s life, and that should be respected.

I can’t tell you the number of days that I had every intention of weight lifting, and instead settled for a walk in the neighborhood because after a long day of working, playing with my kid, taking care of my dog, nightly chores/picking up.. that’s all I had the energy for, and that’s okay.

This shouldn’t have even been a question, he should know that what he is doing is abhorrent behavior. 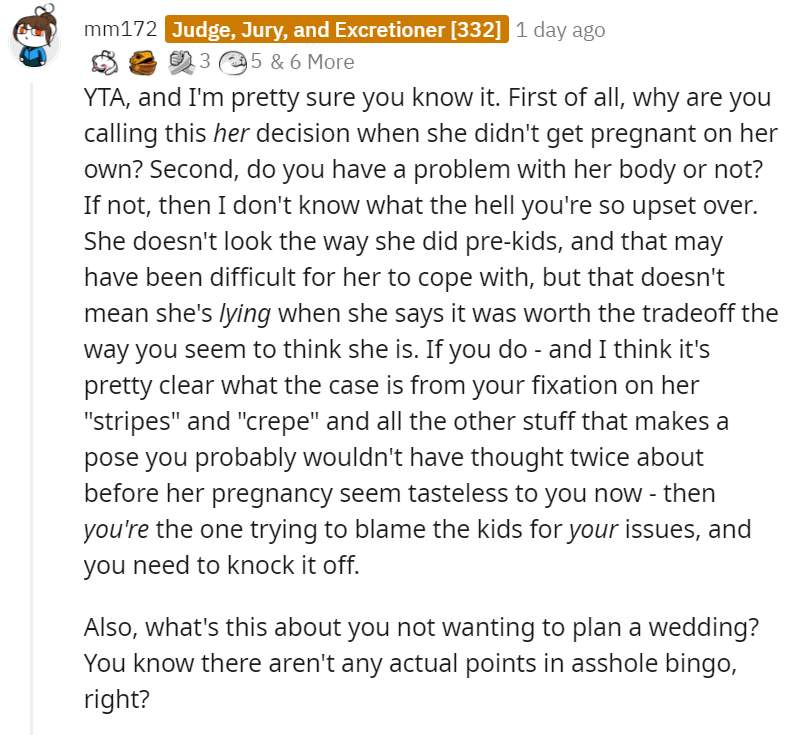 Her priorities have changed since she has children now who need her full support. 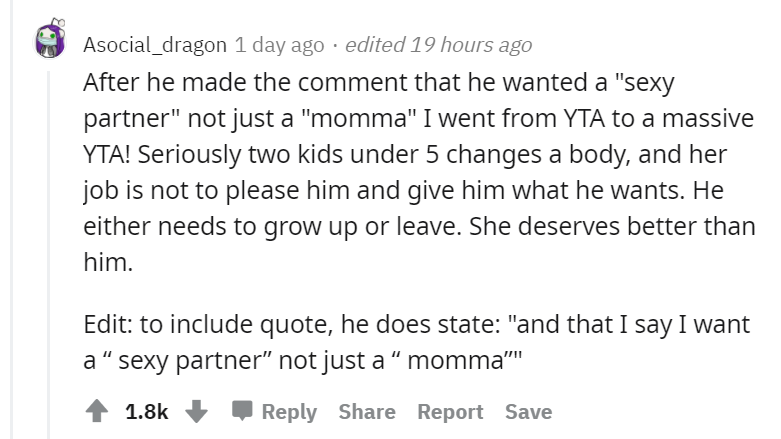 But he took everything negatively since that is where his own mind is at.

He is projecting his own consciousness over things that aren’t there. 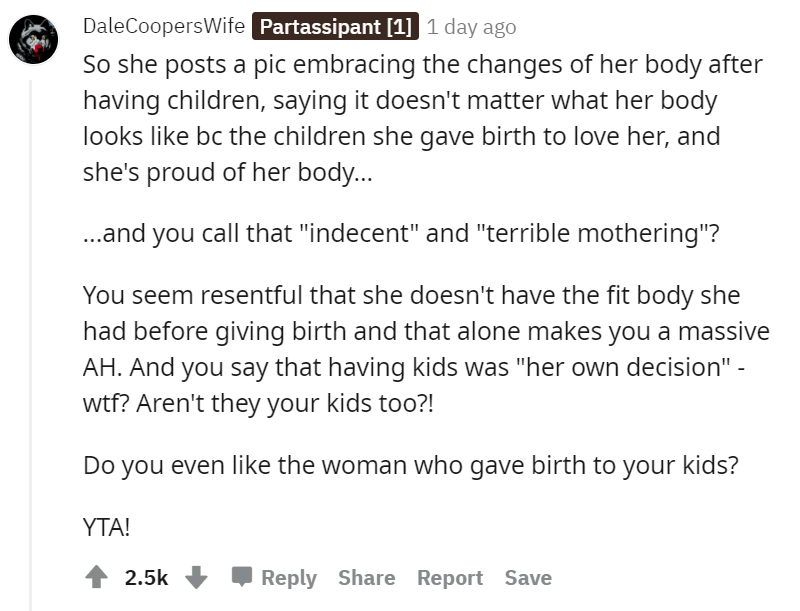 Rather than caring about how beautiful it is that his fiance gave him two children, he wants his ‘sexy partner’ back. 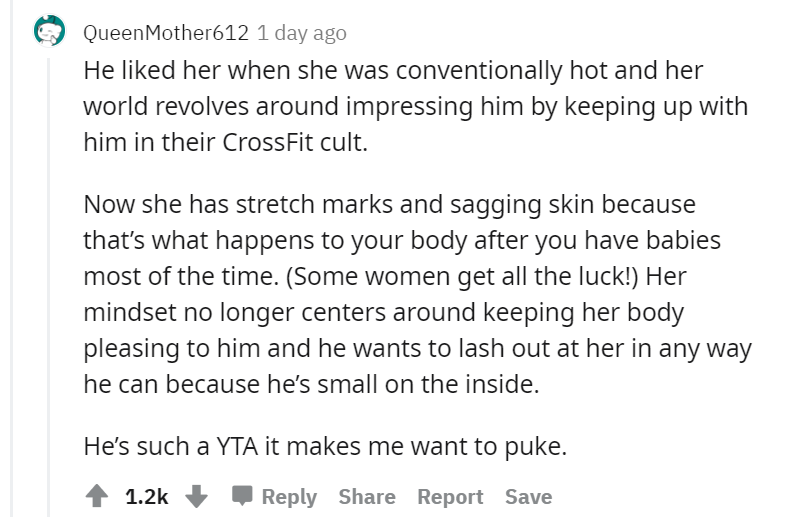 YTA. Don’t think you can hide your a**holery behind a misleading title, we see you. There is not a plane of existence in which you are not the asshole.

I’m glad she knows her kids think she’s beautiful. I notice she didn’t say anything about you. No surprise there, as this post shows you to be extremely judgemental and condescending.

Pregnancy and birth can not only mess with your body but also fundamentally alter your perception of and relationship with your body. It’s a lot to deal with, and she’s doing it alone. No wonder she reached out to others for help. Stop judging. Start supporting. –HamOfDespair

What do you think of the guy in this scenario? Let us know in the comments below.