There is a reason women are angry these days.

Technically, this isn’t a new thing. Women have dealt with far worse fates in the past but we continue to have to deal with these sorts of things even when the world is moving on. No matter how many people say we don’t have any need for feminism, there are still a lot of things that need to be fixed in this society.

And I am well aware some men don’t understand what all the fuss is about. Well, that is probably why this guy tried to explain everything with an analogy. It may not be perfect but it might be the closest thing to get a man to understand the women’s side of the story.

Just scroll on below and take a look.

It never stops. The same things keep happening over and over again. 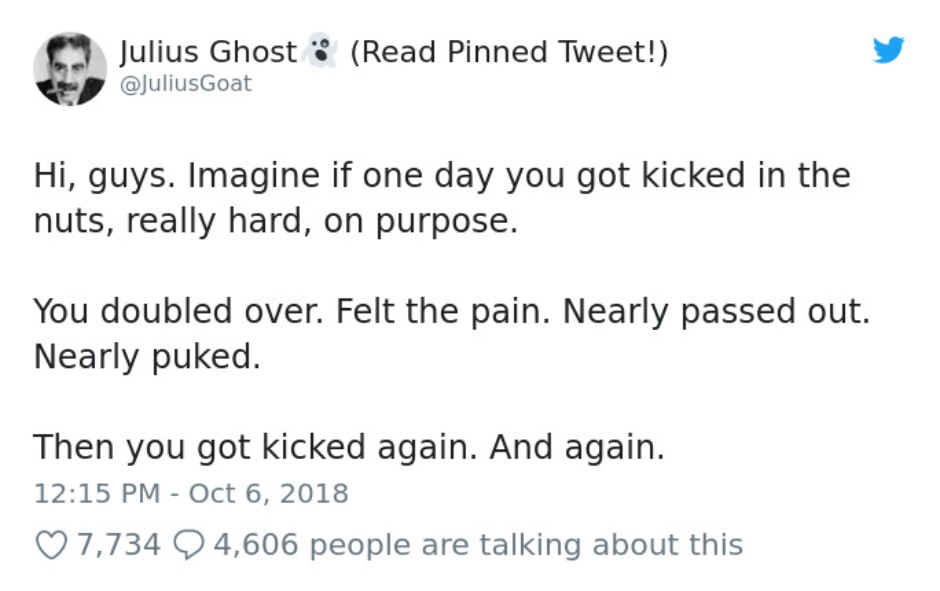 No matter your age or the age of the perpetrator, you are never safe. 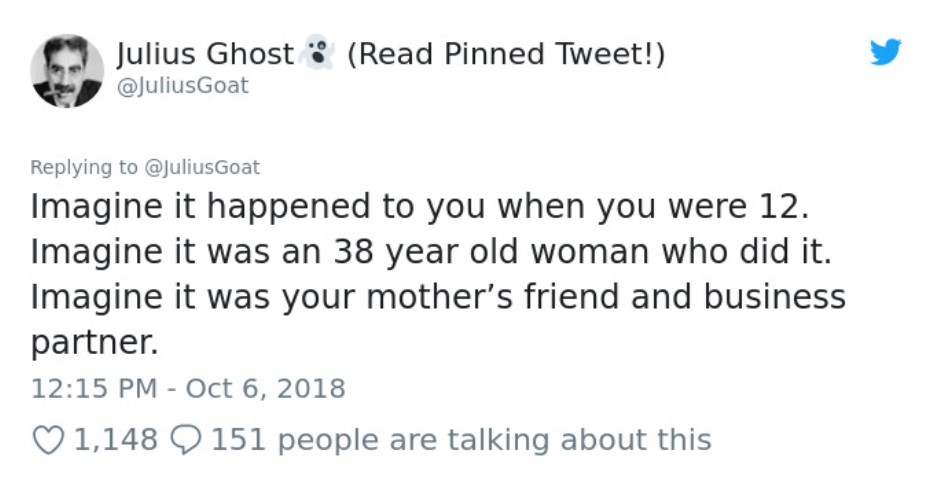 And rather than the perpetrator being punished, your parents teach you to safeguard yourself. 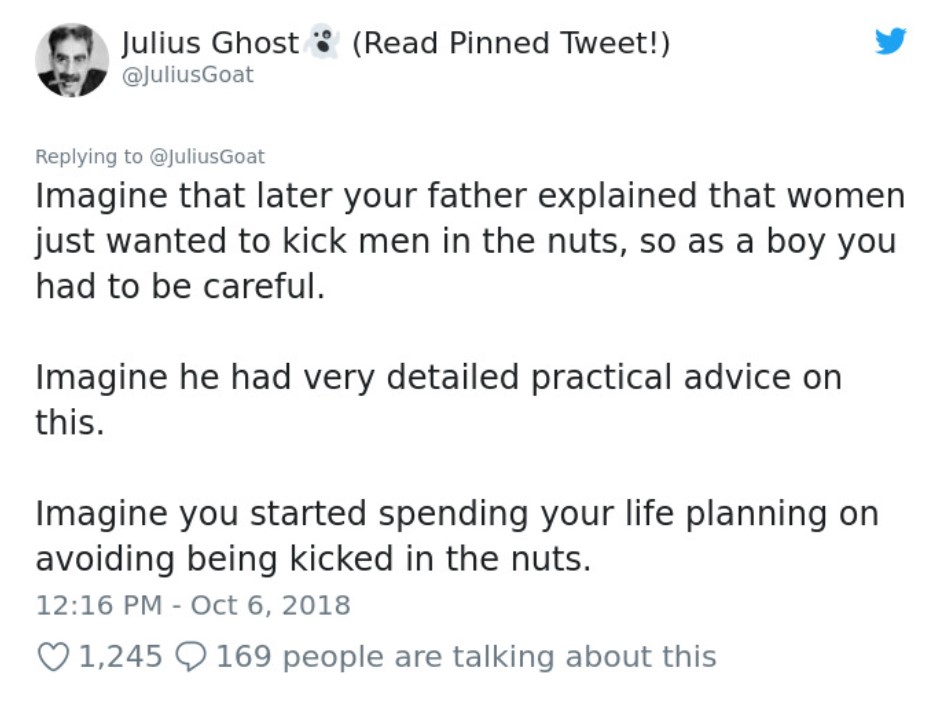 Speaking on the societally-macro level, empathy has been largely a one-way street when it comes to gender roles and dynamics. In my experience, women are empathetic toward men, while men tend not to be particularly empathetic toward women.

Put another way, women have to think about what men are feeling as a matter of survival. Men aren’t in a similar situation, and so, if they don’t want to, they don’t. And, by and large, we don’t want to. When women tell their stories of living with danger and vulnerability in abusive relationships and of survival from assault, our first instinct appears to be to protect ourselves from personal culpability and accountability; we certainly saw that dynamic play out as the Kavanaugh story developed. -A.R. Moxon

After all, it is your responsibility to stay pure and safe. 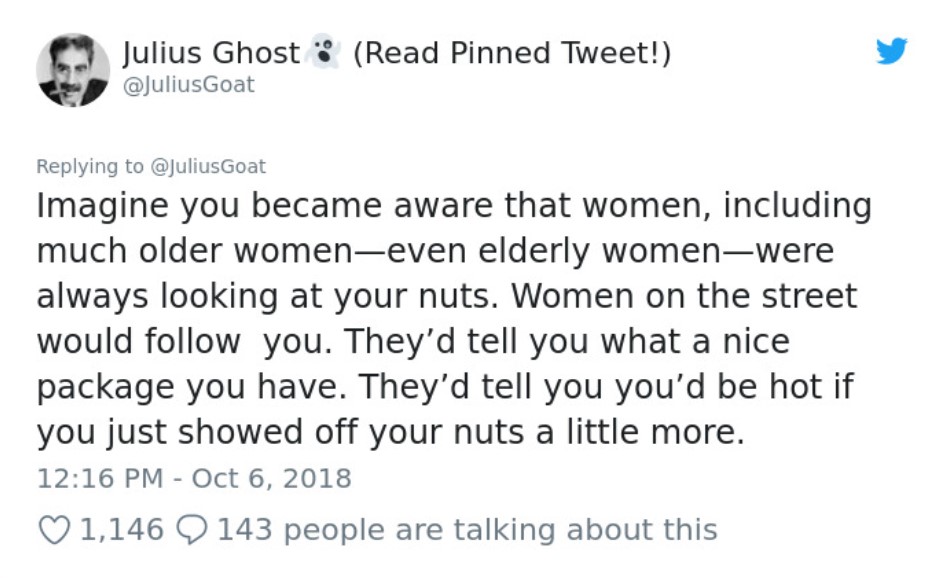 Any sort of media loves to show off these parts to sell their products. 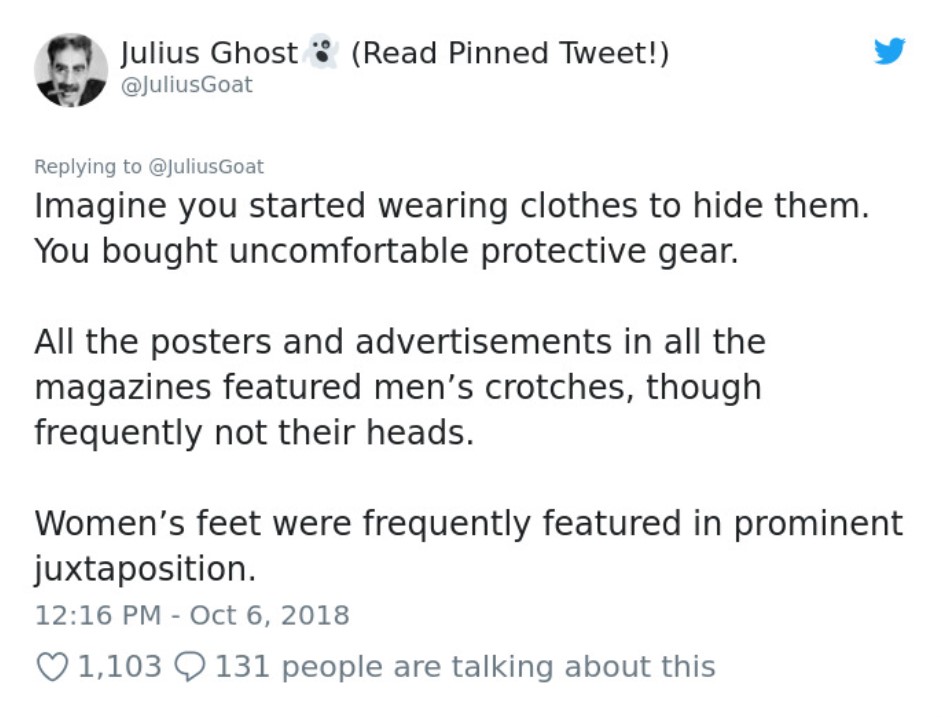 Most women have a story one way or the other. 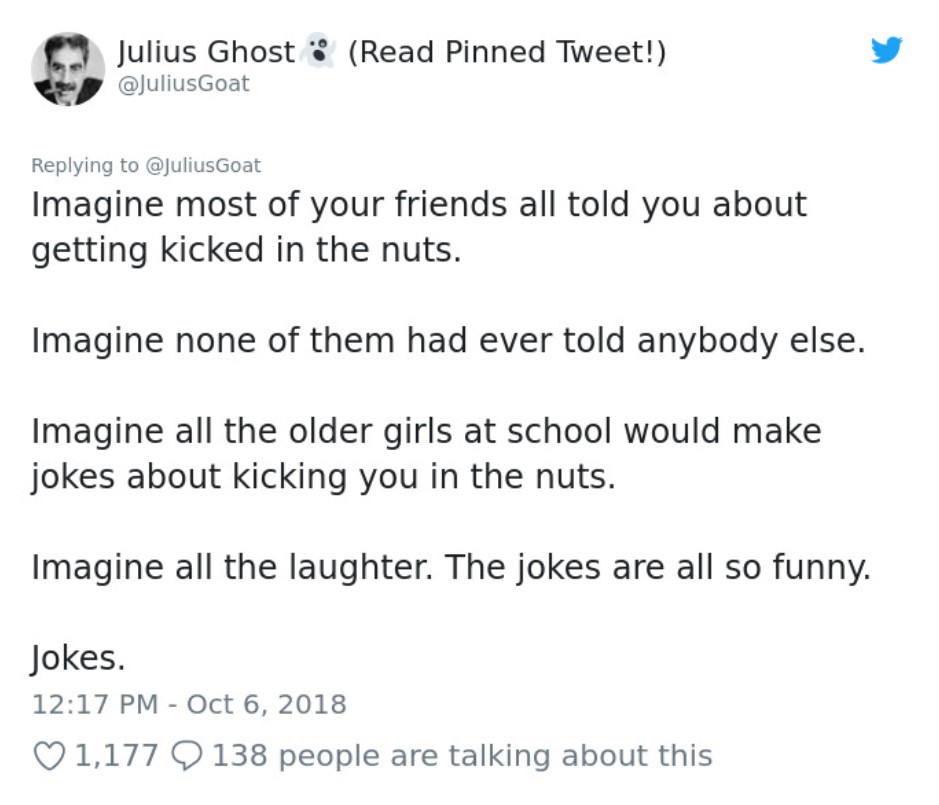 Even in school, you are told to not expose your shoulder so the principal doesn’t have impure thoughts. 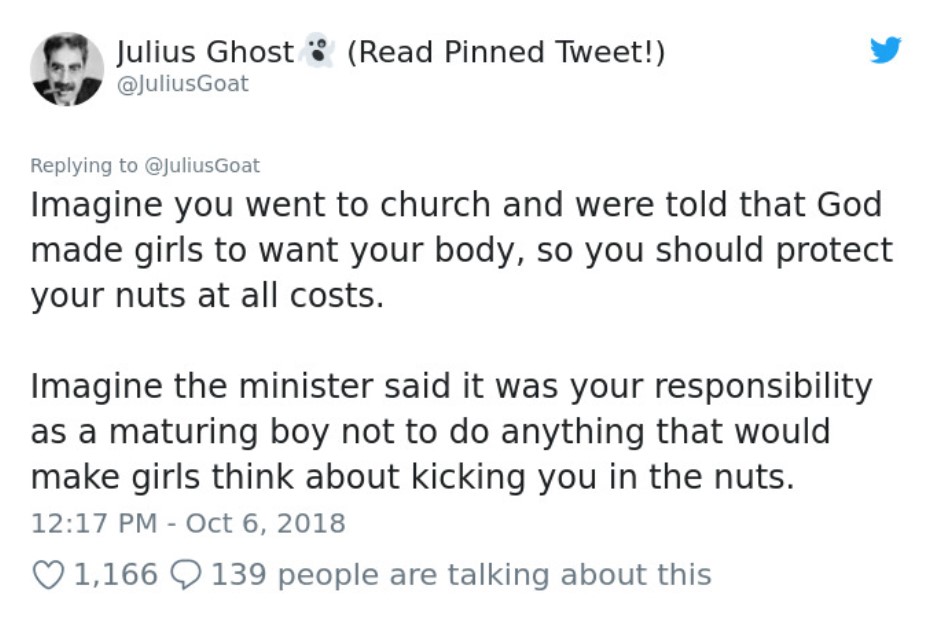 You don’t even know if you can trust your partner. The person you love. 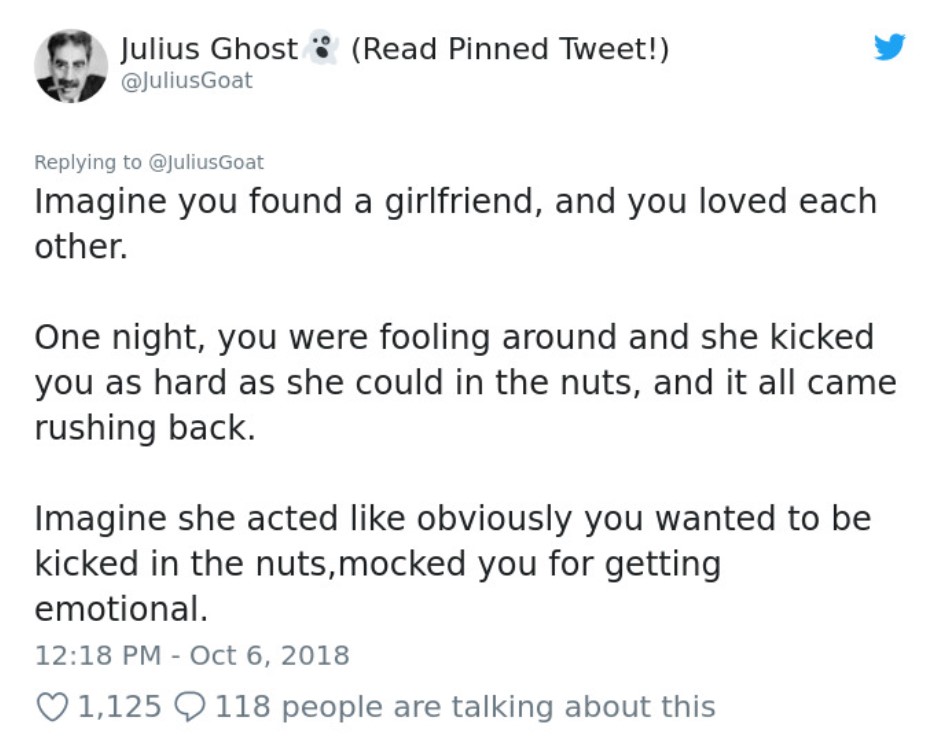 I chose nut-kicking because there isn’t a man alive that doesn’t understand exactly what a nut-shot is, and, with very few exceptions, none who would ever want it or seek it out or go out ‘asking’ for it. Most importantly, no man confuses getting kicked in the nuts with s*x. It’s very clearly violence, even though it involves se*x organs.

The idea of growing up in a society where getting hoofed in the balls is normalized behavior, systematically if tacitly allowed by a complicit society, and frequently confused with a pleasurable activity like s*x, would rightfully be horrifying to any guy. -Moxon

Even the police try to blame the victim most of the time. 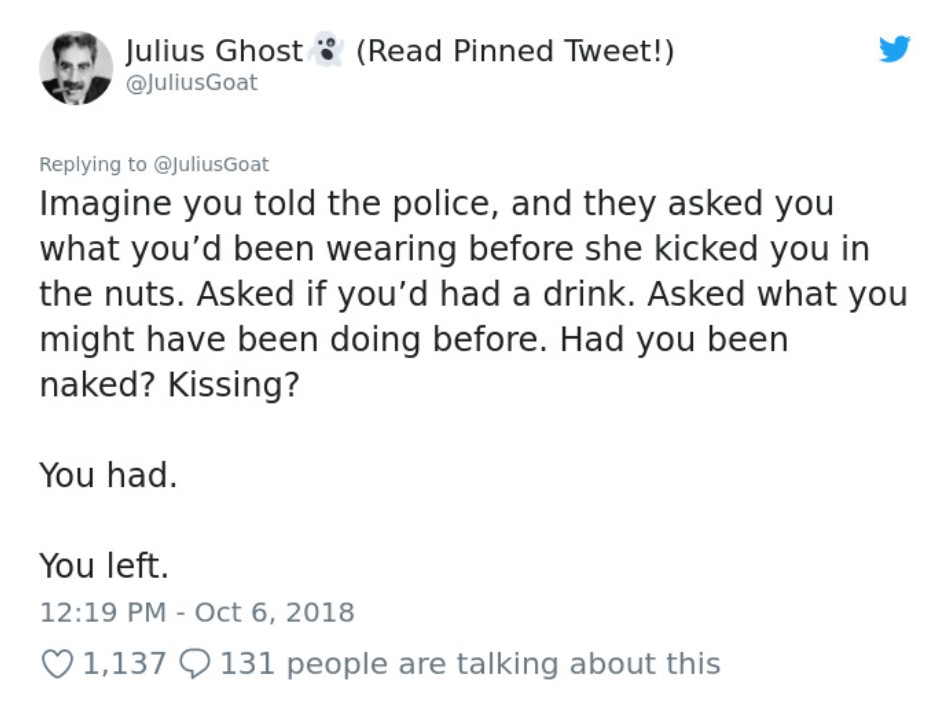 And only a tiny percentage of the perpetrators ever get what is coming to them. 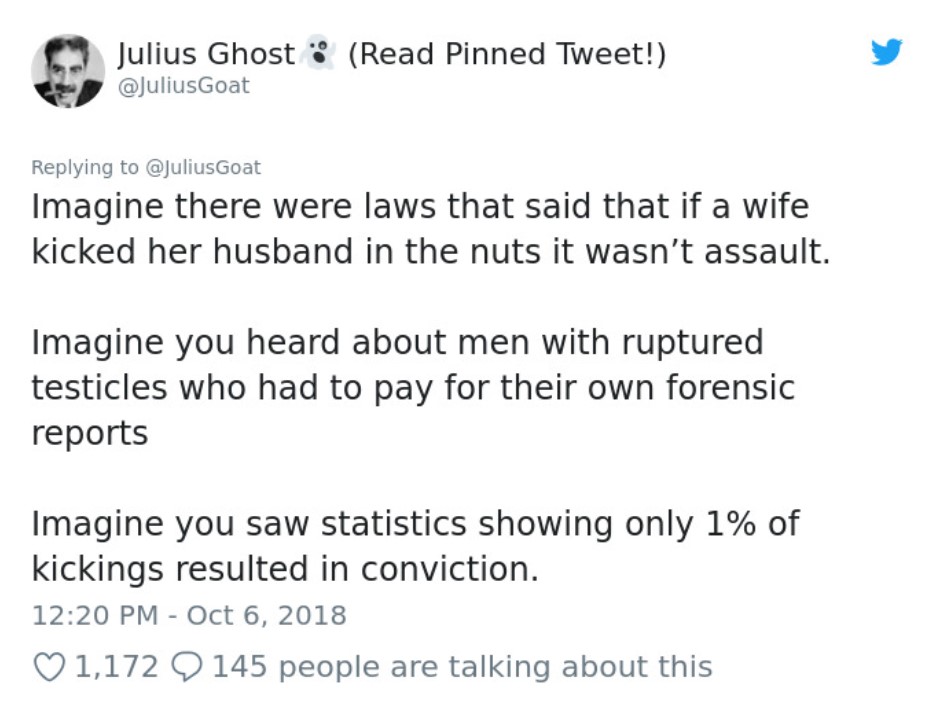 After all, how dare she ruin his chances at a good future. 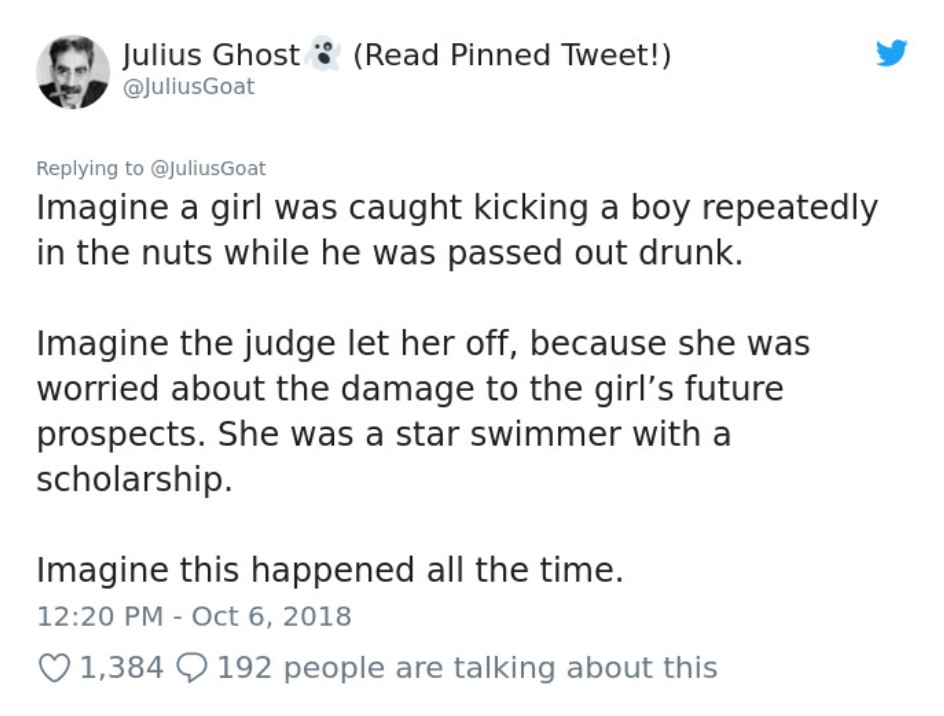 Just because talking about it reveals the horrifying truth of many men. 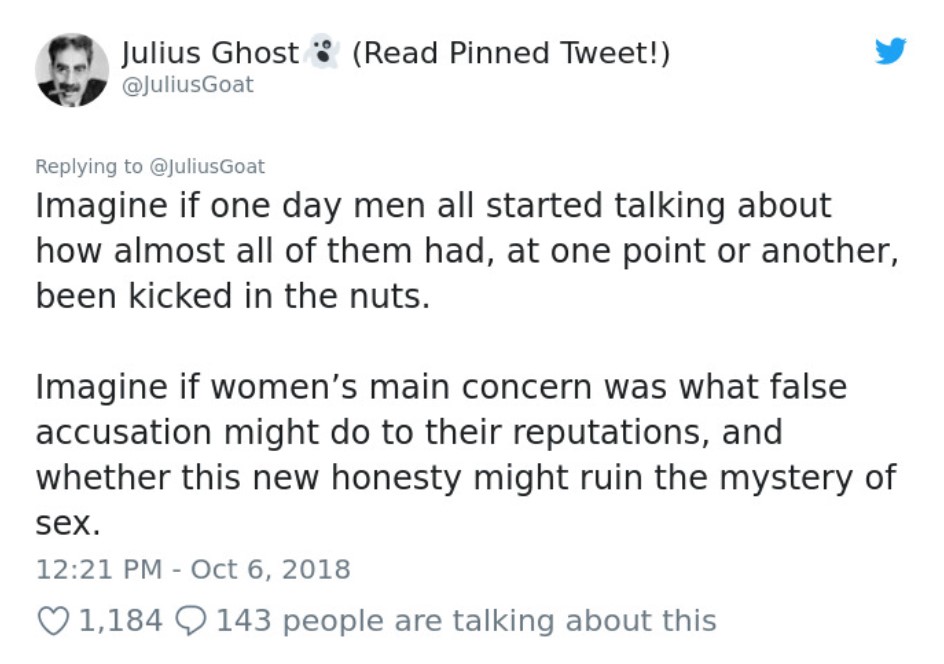 And so many support people who do this sort of thing. 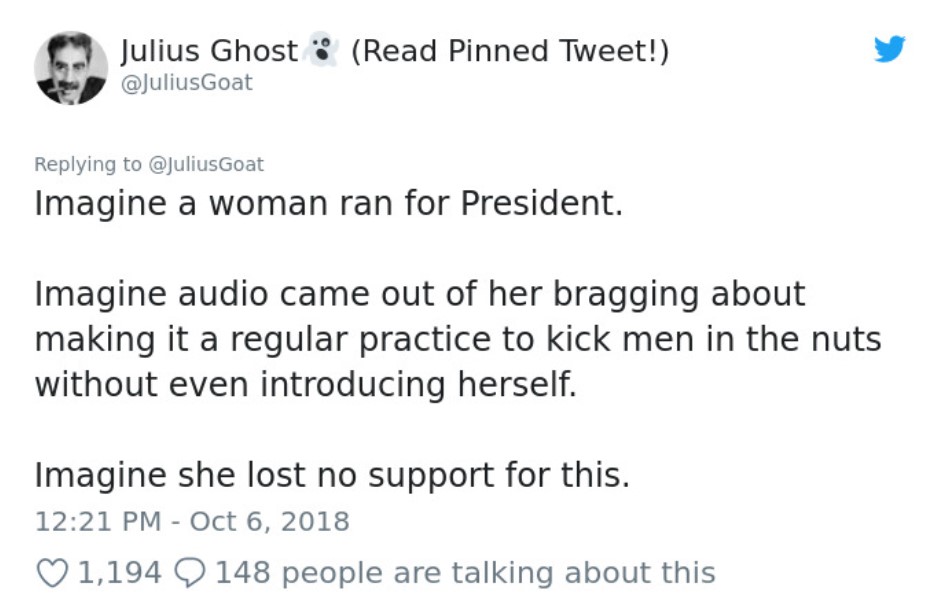 Even making jokes about a serious issue. 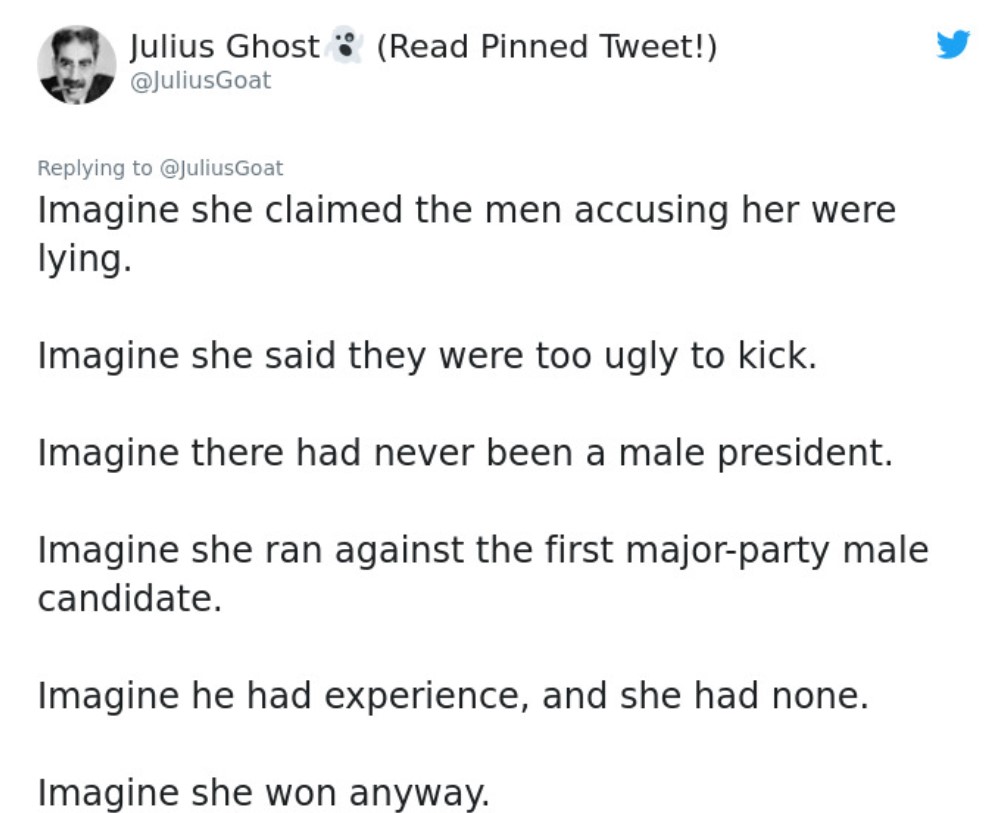 The Kavanaugh confirmation proves once again that one of the primary drivers of our society right now is normalized abuse and enablement of abuse. In such a society, the telling of wrong is itself seen as wrong. It’s unutterably sad. It’s why the country has a bully with the mind of a cruel child as president, supported by power, cheered by crowds.

I think you can see, if you want to, that there is a powerful political party that doesn’t care about women at all, and thinks not caring is good. I dare hope more of us see this clearly now than we did before. -Moxon

Who cares? it’s all in the past right? 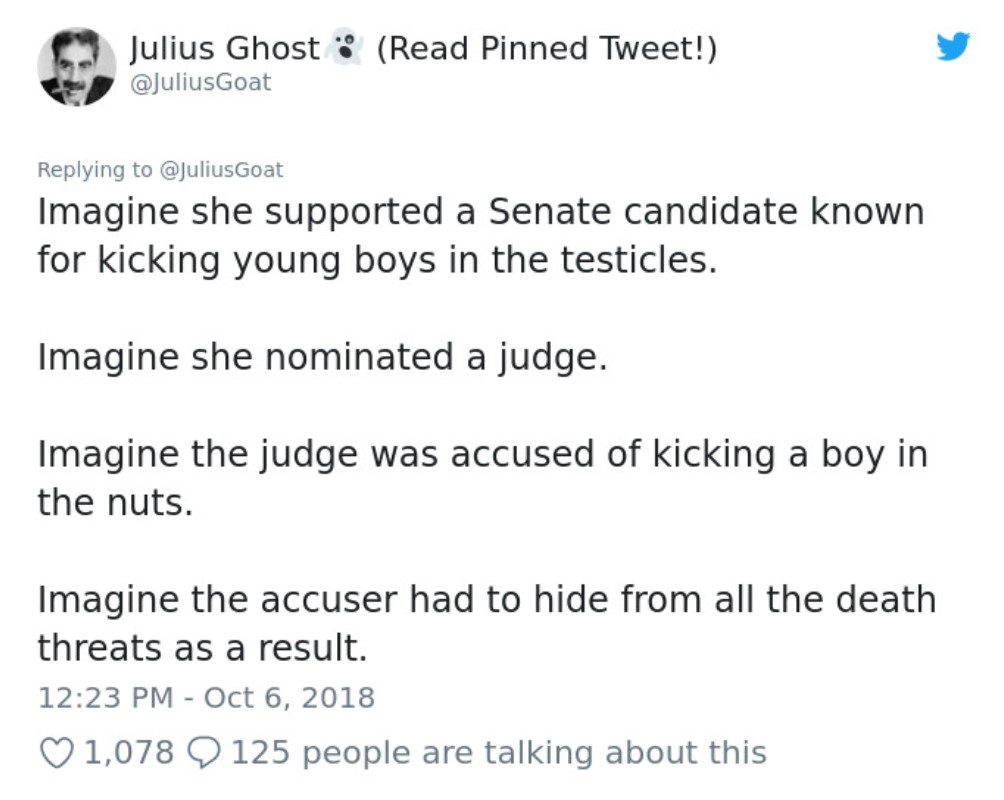 The simple question is ‘can you imagine?’ 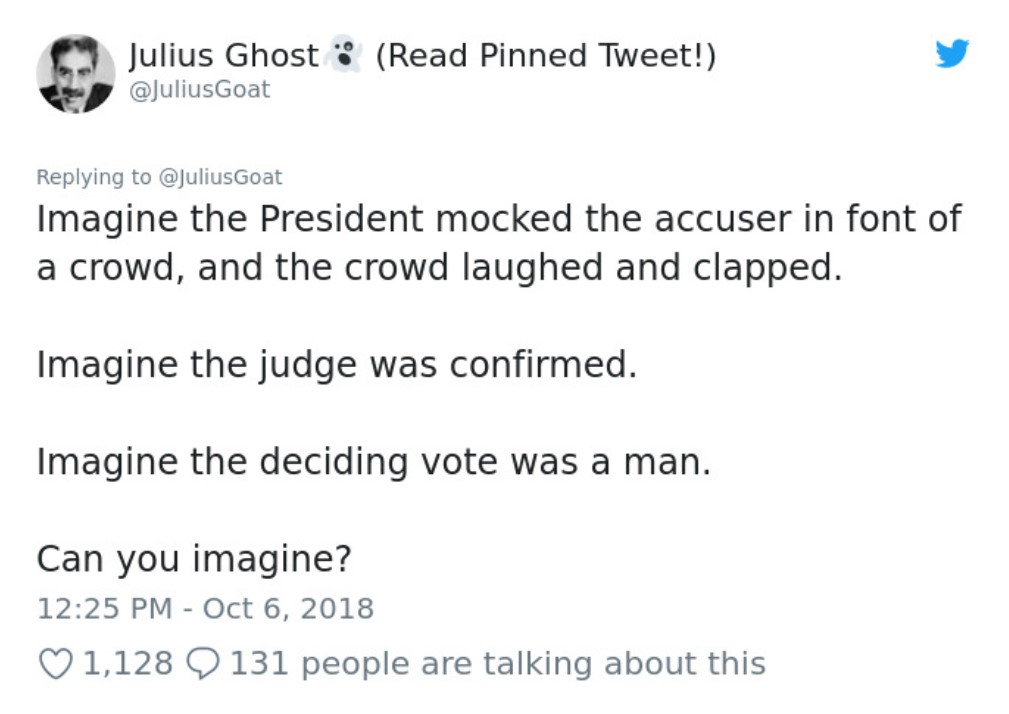 How would it feel like to give birth to a child of the person who ruined your life? 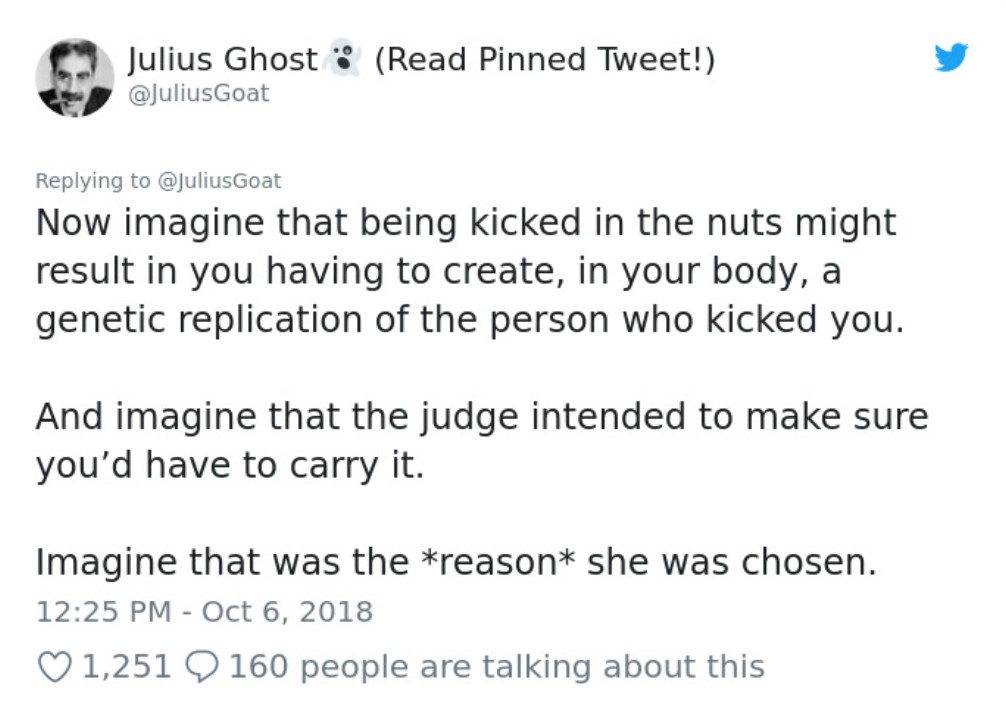 It may not be as easy to understand but a woman can imagine because she goes through these things every day. 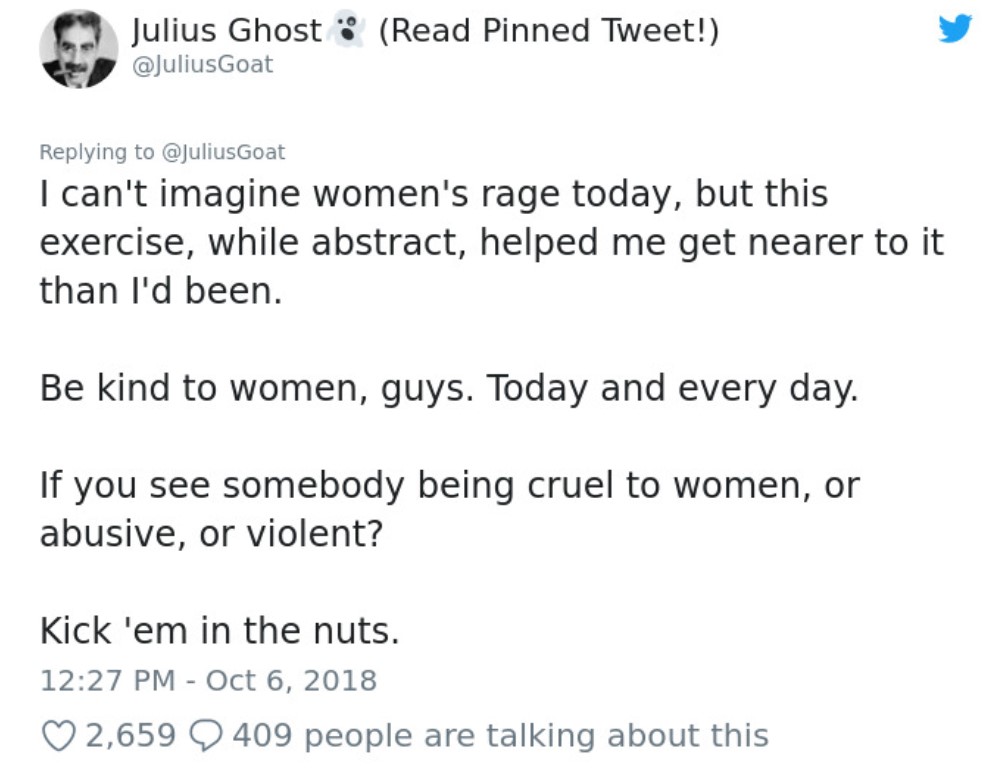 We shouldn’t even need an analogy but how else do we make them understand?

What did you think about this analogy? Do you think it adequately captured all the issues women have to deal with? Let us know in the comments below.